posted by Rocket
All Habs

Was it the early 5 p.m. start? Perhaps it was the distractions of the pool, the beach, or that it was New Year's Eve. Maybe it was that odd feeling of having Habs' fans outnumber the home side at the BankAtlantic Center.

Whatever the reason, we can safely say that this was not a classic. No need to worry that the game recording will be clogging up PVR hard drives of Habs' fans. Having said that, the 5-4 Montreal win was an entertaining match.

It's best that Jacques Martin and crew simply forget about this game, one that was characterized by sloppy play, and poor goaltending.

Well, it seems that Martin is not yet ready to forget.

Just when you thought the Canadiens were getting back to full health, a number of Canadiens went down with injuries in the game.

It's probably due to the blue moon that people were talking about.

The medical alerts started even before the game began with Sergei Kostitsyn experiencing a lower body injury. Fortunately the Canadiens have instituted a no-sleeping policy during games, so it wasn't hard to find Max Pacioretty. He was in the dining room enjoying a meal and was rushed into service taking Sergei's spot in the lineup.

Andrei Kostitsyn went to the dressing room in the second period and did not return after receiving a low hit from Keith Ballard. Glen Metropolit, Marc-Andre Bergeron, and Matt D'Agostini also were injured to a lesser degree.

Josh Gorges continues to look out of place on the top defense pairing with Andrei Markov. Keith Ballard easily walked around Gorges for Florida's first goal. Gorges was victimized again on the Panthers' second goal as he was caught too deep giving Nathan Horton a breakaway.

The Canadiens' penalty killers have been superb during the road trip, but it should be clear that Max Lapierre and Benoit Pouliot are not effective penalty-killers. They were on the ice for the Panthers power-play goal tonight. 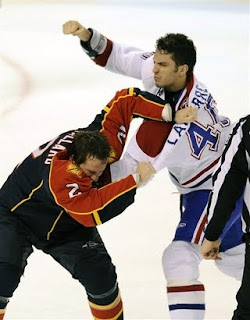 Lapierre held his own in a fight with Ballard (pictured above, courtesy the AP). Lapierre went after Ballard for his low hit on Andrei Kostitsyn that put him out of the game. Pouliot scored his second goal in a Canadiens' uniform.

Many questioned Martin's decision to start Jaroslav Halak, especially given that Carey Price was the No. 1 star in the Tampa Bay game. It would seem the question was justified. Halak looked uncomfortable and shaky all night. At least three of the Florida goals could be considered soft.

Tomas Vokoun wasn't much better at the other end of the ice.

But it was an important win, giving the Canadiens' six wins in seven road games. The month of December was supposed to be one of the most difficult given the schedule. The Habs are no doubt pleased with their 9-7-1 record.

Markov continues to prove just how valuable he is. The Canadiens are 7-1-0 with him in the lineup. Markov had three more assists tonight, giving him 11 points in eight games.

The Canadiens return home for a game against the Sabres on Saturday night.

Material from wire services was used in this report.

Ryan Szporer
via The Hockey Writers

Links: Playoffs or bust for the Canadiens

Links: Playoffs or bust for the Canadiens