Vinicius Jr. has said "everyone knows" Gabriel Jesus pushed Real Madrid captain Sergio Ramos in the lead-up to Manchester City's equaliser in their 2-1 win at Real Madrid on Tuesday. Real manager Zinedine Zidane also hinted the contact constituted a foul and said "that moment was key."

Isco broke the deadlock in the UEFA Champions League round-of-16 first leg at the Santiago Bernabeu, but Jesus headed City level before Kevin De Bruyne converted a penalty in the 83rd minute.

Vinicius told reporters after the game: "Jesus commits the foul, and everyone knows it was a foul. They always take decisions against us. I didn't need to see it again in the dressing room. It was a foul. Every game it's the same."

Jesus made contact with the back of defender Ramos just prior to scoring the equaliser, but a check with the video assistant referee cleared the Brazilian (U.S. viewers only):

Zidane, who said he spoke with referee Daniele Orsato about the incident, added in his post-match press conference:

"He said there wasn't anything, he hadn't seen anything, there was no push. It's the referee's decision and that's all. What annoys me is what we did, playing well and then 10 minutes at the end changed the game. The mistakes we made, it hurts, we don't deserve it, but that's football. That moment was key."

Los Blancos went ahead on the hour mark and led for 18 minutes before Jesus struck. They will also be without Ramos for the second leg after he was sent off for a last-man foul on Jesus four minutes from full time (U.S. viewers only):

Jesus acknowledged there was contact between him and Ramos in the buildup to his header but told Movistar (h/t ESPN FC's Alex Kirkland): "Football is a contact sport. I didn't push him. I barely put my hands on him. It's not a foul."

Ramos has been guilty of the same kind of gamesmanship in the past:

Ramos getting a taste of his own medicine from Jesus tonight. Sly push in the back for the goal, then runs across him to get him sent off. #MCIRMA

The visitors ended up with the greater share of clear scoring opportunities following Real's late collapse. England star Raheem Sterling played an important role off the bench, having a hand in Jesus' equaliser before he won the penalty that decided the first-leg result, footage via BT Sport (UK viewers only):

City became the first English team to beat Real at the Bernabeu since February 2009, when Liverpool clinched a 1-0 win away in that season's UEFA Champions League round of 16.

De Bruyne—who was named man of the match following his goal and assist—praised his team for their reaction after falling behind:

Guardiola described Jesus as "so fast and so good" in his post-match comments but was cautious of a second-leg comeback: "If there's one team in the world that can overcome it, it's [Real Madrid] with their experience and their history. Hopefully we can give a good performance and go through."

Real have lost two games in a row following Saturday's surprise 1-0 defeat at Levante, and they have won just a single match in their past five outings across all competitions.

City may fancy their chances of advancing to the Champions League quarter-finals for a third straight year after the return leg at the Etihad Stadium on March 17, when Ramos' absence could prove key.

Stepanovic: Jovic is doing everything to ruin his career 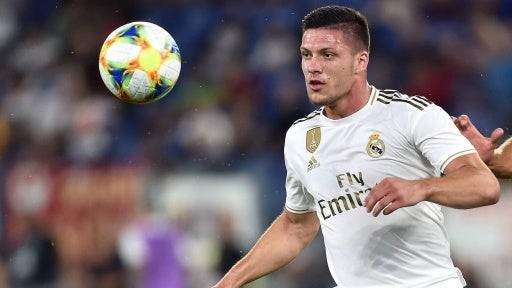 Stepanovic: Jovic is doing everything to ruin his career