Don't poke the bear. In an extraordinary development at FC Barcelona last week, team captain and iconic player Lionel Messi felt compelled to release a statement on Instagram—stressing he doesn't "like doing these things"—in which he denounced insinuations made by Eric Abidal, the club's sporting director and Messi's former teammate. The spat has thrown the club into crisis.

As sporting director, Abidal is responsible for player transfers. He put in a dismal shift during the winter transfer window. With Luis Suarez essentially ruled out for the rest of the season through a knee injury—which he picked up in last month's Spanish Super Cup—the club needed to bring in a forward.

In this task, Abidal failed. Valencia forward Rodrigo, for example, was one of several players the club reportedly went after but were unable to get over the line, hampered by irreconcilable buying criteria: the wish to buy a top-class striker without the money available to pay for one.

Instead, in a series of confounding moves, the club sold two of its academy strikers, Carles Perez and Abel Ruiz, to AS Roma and Sporting Braga, respectively. Perez was already a member of the first team.

The one attacking player Barca did sign in January is a young Portuguese winger. Trincao joined for a reported fee of €31 million, but he won't arrive until next season. The €7 million bonus his agent, Jorge Mendes, earned for brokering the deal, at a time of cash shortages for the club, has left a particularly bitter taste in the mouths of Barca fans.

On Feb. 2, Abidal was summoned for a meeting with his boss, the club's president, Josep Maria Bartomeu. He got a reprieve for his poor winter transfer performance. Emboldened by the vote confidence, Abidal was rolled out for a series of interviews with Catalonia's two sports newspapers, Diario Sport and Mundo Deportivo, a couple of days later.

In Abidal's interview with Diario Sport—which was released online in sections on Feb. 4—he blamed the players for a lack of effort and betrayed shocking political instincts in implying the players were responsible for getting Ernesto Valverde sacked in January. (Abidal also claimed Xavi Hernandez wasn't offered the job to replace Valverde.)

Within minutes of the interview's release, Messi fired back. The earth shook. In loud red ink, Messi encircled Abidal's claim that many of the players weren't satisfied with Valverde and weren't working hard. He called on Abidal to name names; if he didn't, he was "dirtying" all of the squad's reputation—and, of course, Messi's most of all, as the team leader and captain.

Bartomeu cut short a trip to Brussels to meet the next day with Abidal. After two hours of talks, Bartomeu decided not to fire Abidal—who became the club's fourth sporting director in five seasons when he was appointed in the summer—for his indiscretions.

"More than Messi's reaction [to Abidal's comments], what I believe was strange and inappropriate were the statements made by Eric Abidal," says Victor Font, who has declared he will run for president of Barcelona at the next election. "These statements that Abidal believes the team is not doing well, he should—given his role—manage that [problem] and help [solve it] and not go and give interviews to the top two sports newspapers in Barcelona, basically pointing [the finger at the team]."

Messi has reason to be fed up. Abidal, his recent predecessors and Bartomeu have failed to build a team to help Messi win another UEFA Champions League title since their last triumph in 2015. They've squandered the best years of his career. They've failed, for example, to replace key players Dani Alves and Andres Iniesta.

"There's a paradox: Every year he plays, Messi is more intelligent as a footballer. He's deadlier at free kicks. He helps the team out more. He's better in midfield, provides more assists. He's improved tactically, but in reality, the team around him is getting weaker. And he notices this."

In the short term, the directors' ineptitude has left the club floundering. They fired Valverde when the club was top of the league table. Since Quique Setien replaced Valverde, they have fallen three points behind Real Madrid and were dumped out of the Copa del Rey by Athletic Bilbao.

The loss of Ousmane Dembele for the rest of the season—because of a hamstring injury—has left the squad further depleted. Only 14 first-team players were available for selection against Real Betis on Sunday night when Messi provided three assists to help secure a nervy 3-2 win. It's no surprise the club's strategy has left Messi exasperated.

"What we have seen over the last few years, and this starts obviously at the very top, is that the club does not have a clear sports project," Font says. "The decisions that are made are improvised and very inconsistent.

"The 4-0 defeat at Anfield [which knocked Barcelona out of last year's UEFA Champions League semi-final] probably indicated it was the right time to change the coach. Given that the board still had two years to go to finalise its mandate [until the next scheduled presidential elections in 2021], it was maybe a good opportunity to change Valverde and give his successor a two-year project to ensure we can compete and win championships. Instead of that, they kept the coach—and then a few months down the road, they changed the coach.

"Once again, it seems like a big improvisation. All of a sudden, they go to Doha and try to sign Xavi—and this was not planned at all. It was a last-minute decision. When Xavi says, 'No,' they go after Ronald Koeman. Then they go after Mauricio Pochettino. If Pochettino had not had his doubts, Pochettino would today be the coach. They even thought about Massimiliano Allegri, but they ended up signing Setien.

"Look at the winter transfer window—if you saw the way they tried to find a replacement for Suarez, and the failure to do that. Selling players because they need money—the finances of the club are very stressed. They need to generate €150 million in sales every year for the balance sheet to be where it needs to be. You put everything together and what you see is the management process looks improvised and erratic. The club has no vision."

Gimenez jokes it would be better if Messi—rather than Bartomeu—was the president. Inevitably, given Messi's stature—and all that the 622 goals he has scored for the club have helped it to achieve—he has accrued a level of tacit power. Club officials walk on eggshells whenever they risk commenting about him in public.

In January 2017, for example, Pere Gratacos, a club employee, damned Messi with faint praise, suggesting in an interview: "Without Neymar, without Suarez, without Iniesta, without [Gerard] Pique and the rest of [the team's] players, he would not be as good a player. But obviously Leo is the best." Gratacos was fired from his post as the club's Royal Spanish Football Federation delegate for offering up his opinion.

Power also comes from Messi's financial might. According to Football Leaks documents published by Der Spiegel, his four-year contract, which runs until 2021, guarantees him a salary of €106 million per season.

At the time of his contract renewal in 2017, club executives calculated that salary payments to Messi amounted to 40 per cent of future payroll, causing one club official, according to a Football Leaks document, to utter a warning: "The player needs to be aware of how disproportionately high his salary is relative to the rest of the team."

Inevitably, such power gives Messi influence when it comes to player transfers, for example, but not as much as people speculate.

"Of course Messi has some power with transfers," Gimenez says. "It would be inadmissible if he didn't. He's the best player in history. Above all, he has the power to leave, but he doesn't have as much power as people try to make out.

"Something that really upsets Messi—and I can say this because I have actually spoken to him about it, and it partly explains why he's so upset at the moment—is that people think he chooses what players come and go at Barca.

"Yes, he can be consulted if he likes this player better than another one, but sometimes the club doesn't listen to him. Obviously he didn't ask for Junior Firpo or Andre Gomes or Arda Turan and others lately who have arrived at the club. He wanted to get Kun Aguero, for example, and the club bought Luis Suarez instead. And it worked; the club made the right decision."

The case of Neymar is another example. Last summer, Messi asked Bartomeu to sign the Brazilian forward. In a very public, and at times shambolic, pursuit, the club failed to deliver. Messi wasn't impressed, telling Sport: "I don't know what happened with the board. I know that I spoke with Neymar, and he told me he was desperate to come back. I don't know if the club really tried or not."

What happened to Valverde—and the implication by Abidal that Messi was to blame—has also annoyed the Argentinian No. 10.

Messi was keen on a summer reunion with Neymar.AFP Contributor/Getty Images

"The example of Valverde's sacking is an unusual case," Gimenez says. "Messi called Xavi [to sound him out about the job as Barca manager]. Yes, that's true, but let's look at the context. The story that Barca has sold is that Messi said, 'Valverde should be fired; Xavi should replace him, and I will call him.'

"It's not the same as Abidal coming to Messi and saying: 'Let's fire Valverde. If Xavi comes, what do you think?' And Messi said, 'If you fire Valverde, I think it's OK if Xavi comes.' So the club asked him, 'Could you call Xavi and persuade him to come?' He said, 'I can.' That's what happened. Both stories are very different, and they are the two versions that are contradicting each other now.

"Messi had a great relationship with Valverde, magnificent, but another thing is that if Messi saw that things with Valverde were not going well, and the club decided to fire Valverde, and they told him, 'We're going to bring in Xavi'.

"Messi thinks, 'If Valverde leaves, I'm very sorry because I like him, but maybe it's true that a change is necessary, so it's OK if Xavi replaces him.' But then Xavi said, 'No,' and then the club said, 'Koeman will come', and he didn't, and that Pochettino would come, and he didn't. In the end, Setien was appointed, and Messi [concluded], 'You have been lying to me from day one.'"

Where this will end has Barcelona's fans on tenterhooks, as Messi has a release clause that enables him to leave the club on a free transfer during the summer, which has caused a flurry of speculation linking him to clubs such as Manchester City.

It seems unlikely for personal reasons alone that Messi would leave—he has lived in the city, or rather on the outskirts in a beachside town called Castelldefels (where Suarez lives next door), since he was 13 years old. His children are tied down at school, which, he has suggested previously in a television interview with TyC Sports, diminishes the chance he would spend a season at his childhood club Newell's Old Boys in his hometown of Rosario.

"No, I don't think Messi could leave the club," Font says. "I think he wants to stay. He wants to retire here. He has the option of being a one-club man. That's why the board have been putting their best efforts to ensure that Messi is happy, but what has happened over this last week indicates that they are not even achieving that. If Messi end ups leaving, that would be the biggest mistake in the history of any football club's board."

Barca forward says 'I would like to get the No. 7 shirt again' 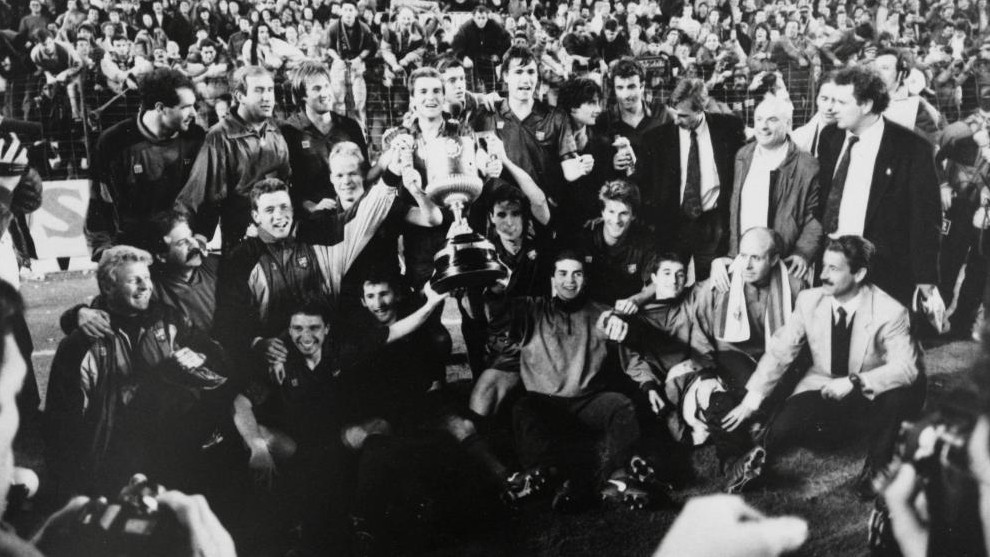