Davis Bertans was entering a contract season with the San Antonio Spurs and in the gym shooting hundreds of jumpers, with a chip on his shoulder from not being selected to the Three-Point Contest last season. His goal was to become the league's best shooter with the Spurs. Instead, his vision was blurred when the team that developed him called and said he was traded to sign another player at his position.

Had Bertans not been traded, he would've strongly considered re-signing with the Spurs this summer, a league source told Bleacher Report.

In July, San Antonio traded Bertans to Washington as part of a three-team deal with Brooklyn. The trade created cap space for the Spurs to sign Marcus Morris to a two-year, $20 million contract. Morris famously backed out of his commitment to the Spurs, signing with the Knicks instead.

Once the Bertans trade happened, there was no turning back.

Following the trade to Washington, Bertans spoke with Wizards general manager Tommy Sheppard and coach Scott Brooks, who both promised an expanded opportunity. After being shocked from his previous call with San Antonio, Bertans' chat with Washington made him confident he'd get more plays run for him and a green light to shoot more often. It was the ideal scenario for a player with tens of millions of free-agency dollars on the line. 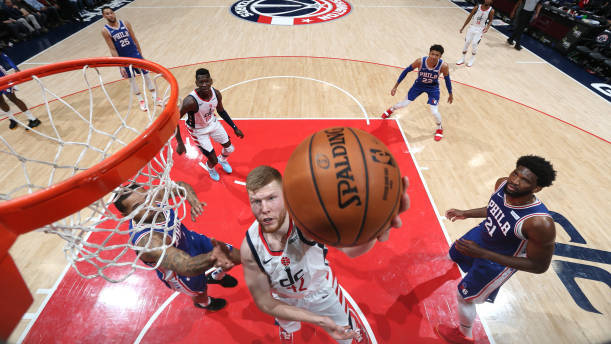 Thus far, it's worked out for both sides. Bertans is in the middle of a breakout season and has nearly doubled his scoring average (8.0 to 14.9) in Washington while averaging a career-high 29.3 minutes per game thanks to more plays called for him involving screen sets to free him around the arc.

However, the question is if he'll remain with the Wizards past Thursday's trade deadline.

For Sheppard, he can either sell high on Bertans, 27, and hasten a rebuild or re-sign him long term this summer while attempting to make a push for the playoffs next season.

Currently, Washington isn't trying to move Bertans, according to league sources, but is listening to calls from teams that are doing their due diligence and asking what his price tag would be as the trade deadline nears. Several executives around the league believe it would take at least a first-round pick for Washington to part with Bertans.

Although Bertans will become an unrestricted free agent this summer, Washington—or a team that trades for him—will hold his Bird rights. That means he can be re-signed while exceeding the salary cap for any amount up to the maximum salary. He is expected to command a $15-17 million average annual salary, according to several NBA executives who spoke with Bleacher Report.

The Latvian sharpshooter ranks fourth in three-pointers made per game (3.6) and has become one of the most coveted players on the trade market, with the 76ers, Hawks, Lakers, Celtics and Nuggets among his suitors, according to NBC Sports Washington's Chase Hughes.

Philadelphia could use Bertans' shooting ability, but its frontcourt is crowded with Joel Embiid and Al Horford. With the 76ers in sixth place in the East and championship expectations in mind, management can dangle Oklahoma City's 2020 first-round pick (protected 1-20) as a starting point.

Acquiring Bertans' Bird rights makes trading for him more valuable to a team like Philadelphia, which currently has a payroll over the salary cap heading into the summer. The Sixers may also feel more compelled to make a move at the deadline to bolster their bench and shooting.

Should they whiff on a trade attempt for Bertans, they could pivot and add shooting in the backcourt by targeting veteran role players such as Detroit's Langston Galloway or New York's Reggie Bullock on the trade market.

The Nuggets have Mason Plumlee's $14 million expiring contract if Washington wanted to unload a bad contract as part of a Bertans trade. Would Denver be willing to part with Will Barton or Gary Harris for the potential rental? Restricted free agent-eligible players such as Malik Beasley and Juancho Hernangomez could also interest Washington. However, the team has no first-round pick to offer in this draft class.

Boston has first-round picks from Memphis (1-6 protected), Milwaukee (1-7 protected) and its own, along with a young player such as Romeo Langford. In a weak draft class, that may not be enough for Washington.

Kyle Kuzma is the most coveted trade chip on the Lakers, but it wouldn't make sense for Los Angeles to move a younger and more talented player for a potential rental.

As noted previously on Bleacher Report, the Hawks are working to improve the supporting cast around All-Star Trae Young and have Brooklyn's 2020 first-round pick (protected 1-14) to dangle. Yet Atlanta will have the most cap space this summer and can bid up Washington for Bertans' services if it wants to continue adding shooting around Young. With the team cellar-dwelling, there's no need to move a trade asset for a potential rental.

As of now, most executives around the league expect Bertans to remain a Wizard.

Despite hearing his name surface as a trade target for various teams, the 6'10" forward has enjoyed life off the court in Washington and would like to remain there.

"It's a great city," Bertans told Bleacher Report. "I love that there's some history. It's an international city, and at the same time, my wife enjoys it. We're living downtown. There are a lot of places you can just walk, and you don't have to drive anywhere. Having a little bit more of a similar feel to how it is back home for us in Latvia because we also live in the capital city downtown and have the opportunity to walk downtown and not be stuck in the car for a half-hour going somewhere."

Washington also has the NHL's best team, the Capitals, which could further appeal to Bertans, who grew up playing the sport during the winter with his brother, Dairis, in Latvia.

Bertans' love for Washington is matched by the fondness Sheppard has for his game. During a Dec. 16 appearance on the Off the Bench podcast, Sheppard stated, "We intend to keep him [Bertans]."

As Bertans strolls through Washington with his wife, Anna Sonka, he has begun to envision what the future would look like if he re-signed.

"I've been happy with the chance that I'm getting here with the whole idea of what the team is doing for the future and John [Wall] coming back next year," Bertans told Bleacher Report. "With this team basically with all the guys coming back healthy, we can actually do something in the Eastern Conference, and that's one reason why I'd love to stay here. But things happen, and you never know for some plans might change at some point for either the team or me. You never know what happens in the future, and when the summer comes, we'll see how it goes."

One thing that's certain is this is Bertans' best chance to secure a lucrative long-term deal, and a huge discount is unlikely to be given considering he was just traded and knows it can happen again at any time.

The Hawks are a team to keep an eye on for Bertans this summer and have the most cap space to spend in the league. Young and Bertans' ability to stretch the floor would form a deadly pick-and-pop combo and provide a talent upgrade for the Hawks point guard.

With Thursday's trade deadline approaching, Bertans and Morris will be linked once again as contending teams scour the market for forwards who can stretch the floor. This time, however, Morris appears to be the player more likely to be traded.

The Spurs—with a record of 22-26 and in 10th place in the West—clearly haven't recovered.

Morris essentially treated the Spurs like a person who goes on a first and second date and then ghosts the other person, leaving them to question what went wrong.

Instead, Morris signed a one-year, $15 million deal with the Knicks, and he and his former agent, Rich Paul of Klutch Sports, parted ways. Morris later signed with agent Sam Permut of Roc Nation for representation.

San Antonio was left scorned and filled with a mix of anger in the front office and a fear that the team traded a promising player and would be empty-handed. Morris and Bertans joined Kawhi Leonard as names that were unspoken by some employees.

Morris damaged his reputation and joined the likes of Hedo Turkoglu, Carlos Boozer, DeAndre Jordan and Nemanja Bjelica as guys who went against their word. Unlike those players, the Spurs made a trade to accommodate signing Morris. In a league built on relationships, respect and trust, Morris broke an unspoken code.

Instead of keeping Bertans or signing Morris, the Spurs signed another client of Paul's, Trey Lyles, to a two-year, $11 million deal, which includes a $5.5 million non-guaranteed salary for next season. Since then, Bertans and Morris have become two of the most coveted trade chips in the league through the first half of the season, and DeMarre Carroll (acquired in the Bertans trade) and Lyles have averaged a combined 7.0 points per game.

"Let's just say that was an unfortunate situation that was handled unprofessionally on a couple of different levels," Spurs coach Gregg Popovich said at the team's media day. "We made that move to make the signing that we did and got blindsided."

"It was more than difficult to lose Davis," Popovich also said. "Davis was a special player as we all know, and he was young and getting better and better. So, yeah, we hated losing him."