Manchester City academy graduate Phil Foden has said he couldn't ask to work for a better manager than "great guy" Pep Guardiola, despite concerns regarding his first-team development at the Etihad Stadium.

Foden, 19, made his senior City debut in November 2017 and has racked up 58 first-team appearances under Guardiola, including 22 starts for the defending Premier League champions.

"You honestly can't ask for a better manager in football. He's so demanding, even me at such a young age, he wants a lot from me, that's what I love.

"He always wants to push me further. He makes you a better player, the best you can be. I'm thankful for that.

"He is a great guy, very down to earth. You can have just a normal conversation with him. If he sees a weakness in someone's game, he will correct it straight away."

It was one year ago that Guardiola, 48, was faced with the question as to whether he'd be willing to loan Foden out, replying in disbelief that the midfielder would stay at City for "many, many years":

FODEN HERE TO STAY⚽️ @ManCity boss Pep Guardiola says there is no chance he will send Phil Foden out on loan. Not even a slight one Pep?🤷‍♂️ More Manchester City news here: https://t.co/58QJhkPbmN https://t.co/UUNAYPte2P

The teenager enjoyed something of a breakthrough campaign last season as City won a domestic treble, scoring seven times in 26 appearances, though only 11 of those outings were starts.

City veteran David Silva confirmed in June 2019 that he would leave the Etihad when his contract expires this summer, and there's an argument for Foden to inherit his place in Guardiola's plans.

The Citizens could do with a locally produced talent succeeding in the first team, with the major focus having shifted towards importing ready-made stars since the Abu Dhabi takeover in 2008.

The Catalan coach recently shared high praise for his starlet before the player scored and assisted in a 4-1 UEFA Champions League win over Dinamo Zagreb in December, via The Coaches' Voice:

🗣️ "He can do it in small spaces. He is so good. He has the pace and the rhythm." Pep Guardiola is full of praise for young English midfielder Phil Foden. (🎥 @HaytersTV) #MCFC https://t.co/DgroUeCeyQ

Foden described Guardiola as a "great coach" and added: "It's a pleasure working with him every day. The little details make a big difference. So say we've got Crystal Palace, he will have watched so many games, all the defensive actions, all the attacking actions, so he can make it clear what we have to do in the game."

City star Raheem Sterling is convinced his team-mate belongs among his more senior peers and backed Foden to win senior England honours after he scored in a 2-0 October victory over Zagreb, via BT Sport:

The Telegraph's Jason Burt reported in mid-January that Guardiola intends to see out his current City contract until 2021, with rumours he could leave this summer should Liverpool clinch the Premier League title.

Foden has enjoyed a gradual rise through City's ranks since earning his debut under Guardiola, who could look to the midfielder for reinforcements when Crystal Palace visit the Etihad on Saturday.

Ex-Ref Clattenburg: Maguire Shouldn't Have Been on Pitch to Score 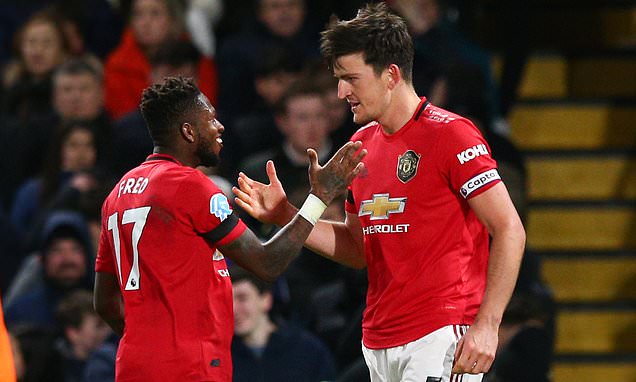 Ex-Ref Clattenburg: Maguire Shouldn't Have Been on Pitch to Score