LSU is reportedly complying with the NCAA regarding a possible violation that took place when Odell Beckham Jr. handed out cash to players following the team's national title game win over Clemson Monday.

The Cleveland Browns receiver—who went to LSU—was on the field after the game and was seen giving money to Tigers receiver Justin Jefferson and Jontre Kirklin in a since-deleted video. An LSU official said afterward that the money was fake, according to Brooks Kubena of the Advocate.

Novelty bills were reportedly found on the field at the Superdome after the celebration.

However, the school said that some real cash "may have also been given" to student-athletes after the game. LSU said it was "in contact with the SEC and NCAA immediately upon learning" some of the money may have been real.

Quarterback Joe Burrow admitted on the Pardon My Take podcast Wednesday that Beckham did indeed give out real money.

"I'm not a student-athlete anymore so I can say ... yeah," Burrow said when asked if he received any.

Burrow has no more eligibility remaining while Jefferson declared for the draft Wednesday, per Pete Thamel of Yahoo Sports. However, Kirklin is expected to return next season and the incident could lead to discipline from the NCAA. 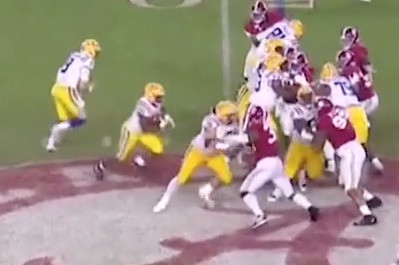 Later, in the locker room, Beckham also said he would sell Jefferson's cleats for $200,000, another potential NCAA violation.

It's all more problems than LSU likely hoped for after winning its first national championship since 2007.