Every draft class is shaped by the trades that occur before and after the three days in late April that change the NFL. There were more than 10 trades in last year's first round—some of those involving the same draft pick—with just one deal inside the top 10 picks when the Pittsburgh Steelers traded up to No. 10 overall to select linebacker Devin Bush from Michigan.

This year the top 10 figures to feature many more trades.

Why should 2020 be more trade-heavy? The quarterbacks.

2020 features three quarterbacks that teams really like, whereas last year only Kyler Murray had a consensus top-10 grade. With Joe Burrow expected to come off the board at No. 1 overall, teams needing a quarterback will be tempted to trade up to gain one. Both Tua Tagovailoa and Justin Herbert are projected by NFL sources to be drafted within the first 10 picks, which means the Miami Dolphins, Los Angeles Chargers and Carolina Panthers could have to move up to No. 3 (Detroit) or No. 4 (NY Giants) overall to land their franchise passer.

It won't just be the quarterbacks who drive teams up or down the board. The disparity between teams loaded with draft capital (Philadelphia, Indianapolis) and those without (San Francisco 49ers) will result in an active board when the draft starts in Las Vegas.

These teams are expected to be the most active: 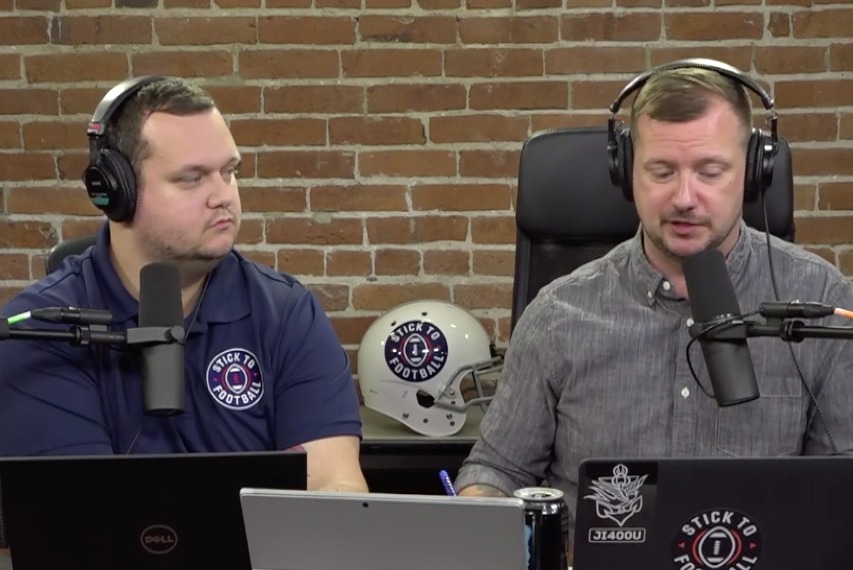 The Colts currently own nine selections in the 2020 NFL draft with three of them coming in the first 44 picks. That's awesome capital for general manager Chris Ballard to either trade up or use a large number of picks to bolster his offense after drafting heavily on defense in previous years.

Ballard is aggressive and won't be afraid to use his cache of draft picks to move up if needed. The Colts are currently rolling with Jacoby Brissett at quarterback, but he's set to be a free agent after the 2020 season. Ballard could pull off a move similar to what his old team, the Kansas City Chiefs, did when trading up to select Patrick Mahomes if he catches feelings for one of the 2020 draft's quarterbacks.

With three early selections and a ton of cap space, the Colts figure to be one of the most active teams in the upcoming offseason.

The Raiders own just seven total selections in the 2020 draft and aren't expected to receive a high compensatory selection after signing Trent Brown last offseason. But with two first-rounders (Nos. 12 and 19 overall), the Raiders can be aggressive about moving up.

"Last year, [Mike] Mayock was getting his feet wet, so they didn't trade much. This year? I bet he starts working the board," is how a rival team executive put it. And he's right; last year, the Raiders did trade twice in the second round but otherwise largely stayed put during the draft. This year, the league expects Mayock to have a little more fun trading picks.

The quarterback position is unsettled long-term, the team needs another wide receiver and a middle linebacker, and this year's draft is very good at those spots. If Mayock and Jon Gruden get excited about a player, the team's two first-rounders could get packaged real fast.

The Miami Dolphins were rumored to be tanking for a quarterback during the 2019 season, but they accidentally won enough games to earn the No. 5 overall pick. Much like the Philadelphia Eagles and New York Jets before them when they traded up to select quarterbacks, the Dolphins have a loaded war chest of selections to trade up if necessary.

By shipping Laremy Tunsil to Houston and Minkah Fitzpatrick to Pittsburgh, the Dolphins own pick No. 18 and what's projected to be No. 27 overall (pending the Texans' playoff run). Throwing in one of those with No. 5 overall would likely be enough to move up to No. 3 if the Lions begin taking calls from quarterback-needy teams. This allows the Dolphins to move up to a perfect position to draft Tua or Herbert if they fall in love with either quarterback.

General manager Howie Roseman has to be feeling the pressure. This team is loaded with enough talent to win a Super Bowl (if healthy), but there are needs at wide receiver and in the secondary, and the overall roster needs a youth resurgence.

The good news for Roseman is the Eagles own seven selections and should get three more compensatory picks. He can easily package those 10 picks with players and/or future picks to move up, down and around the board to secure instant-impact players after the 2019 class was built more on depth and projection players.

With a Super Bowl window potentially closing as the team moves into the limelight of the careers of Malcolm Jenkins, Jason Kelce and Jason Peters, Roseman can use this draft to grab high-impact rookies to extend or reopen the team's chances.

Some teams are listed for their draft capital resources or need to trade up and acquire big-time players. The San Francisco 49ers have neither. Instead, the team owns six total picks and none in the middle rounds. The 49ers own a late-first-round pick and nothing else until the fifth round.

John Lynch and Kyle Shanahan might enjoy the vacation on Day 2 and early Day 3 of the 2020 draft, but with Arik Armstead and Jimmie Ward set to hit free agency, the front office should strongly consider trading back from the late first to add more picks.

Every year we hear about teams wanting to move back into Round 1 to secure a fifth-year option on draft picks. The 49ers could stand to benefit from that by sliding back into the top of Round 2 and adding much-needed picks on Days 2 and 3.

—Oregon quarterback Justin Herbert announced this week that he will attend the 2020 Reese's Senior Bowl. Herbert's 6'6" frame and big right arm are sure to wow scouts in Mobile, Alabama, throughout the week of practices. We've seen in years past that the Senior Bowl can push quarterbacks up the board—look at Baker Mayfield and Daniel Jones the last two years. Herbert is a projected top-10 selection.

—Georgia quarterback Jake Fromm has entered the 2020 draft class. Fromm has started for three seasons in Athens and is one of the more experienced junior quarterbacks in the country. What Fromm lacks in size (6'2", 220 lbs) and arm strength he makes up for with football IQ and accuracy.

Scouts will need to dive into the tape to see why Fromm didn't develop well in his sophomore and junior seasons after looking like a first-rounder in his freshman year, but there is a lot to like from a vision, decision-making and smarts standpoint. In a class without a cemented QB4, Fromm has room to move up.

—Tennessee interior offensive lineman (and former left tackle) Trey Smith announced on Thursday he's returning to Knoxville for his senior season. The move for Smith is a smart one. He looked dominant at times in his junior season, but he missed the last five games of 2018 with blood clots. Another year on the field to show NFL teams he's healthy could have his stock soaring.

8. The CFP National Championship Game takes place Monday night in New Orleans and figures to be a good one for NFL scouts and fans alike.

When looking at the two schools, it's staggering how loaded both teams are in terms of prospects. LSU is stocked with 16 players on my 2020 big board, and that doesn't include Biletnikoff Award winner Ja'Marr Chase at receiver and stud freshman cornerback Derek Stingley Jr.

Clemson, a young team, has 11 prospects ranked, and that doesn't include its two best players—quarterback Trevor Lawrence and receiver Justyn Ross.

That's 27 players from one game in one draft class. Here are the players to watch:

7. Get your Egg Bowl tickets now!

Mike Leach and Mississippi State against Lane Kiffin and Ole Miss. The pirate vs. the playboy. It will be amazing.

Leach in the SEC has been long rumored, even before he landed at Washington State, and it finally happened Thursday. The dynamics of Mississippi State will change completely as Leach shifts from Joe Moorhead's power run game to an Air Raid offense.

Fireworks should be expected. On and off the field.

6. The Jan. 20 deadline for underclassmen to submit their names for the NFL draft feels far away, but players are already announcing their intentions on Twitter and Instagram.

Here's an unofficial list of the players who have announced they intend to enter the draft:

It's offensive line week here at Bleacher Report as our NFL Draft 400 team gets ready for the Senior Bowl. Because of this, players are moving up and down the board. And to be honest, as a guy who played wide receiver and safety before coaching quarterbacks, I put off offensive line study as long as possible. So here we are!

Moving down this week is a player who for much of the year carried a first-round grade based on last year's play, but Wisconsin center Tyler Biadasz didn't look like himself this year. He played stiffer and wasn't as quick out of the gate. That led to poorer blocking at the second level.

Biadasz is still a Day 2 pick, but he's not the top-32 lock he appeared to be last year at this time.

The offensive tackle class has been billed as a three-man group: Jedrick Wills Jr. (Alabama), Andrew Thomas (Georgia) and Tristan Wirfs (Iowa). That might not be the case, though.

After I looked at the group of Senior Bowl attendees and recent underclassmen to declare, several tackles are moving up my board. Louisville's Mekhi Becton, Houston's Josh Jones and USC's Austin Jackson are all early Round 2 players who could shoot into the top 32 picks with a good predraft process. The same goes for mid-second-rounders Isaiah Wilson (Georgia), Prince Tega Wanogho (Auburn), Matt Peart (UConn) and Lucas Niang (TCU).

There are three legit first-rounders, but the 2020 offensive tackle class looks really strong on Day 2.

3. Sleeper of the Week

LSU is so loaded with draft prospects that it's hard to imagine anyone could fall below the radar, but junior center Lloyd Cushenberry III has done just that.

An athletic mover in the run game and a heady, smart pass protector, Cushenberry has the look of a rookie starter who would fit in both zone and power schemes. That's hard to find and could push him to the top of the center class if he decides to declare for the 2020 draft.

Come hang out with Mello, Connor and me on Tailgate Tour throughout the 2020 draft process. Here are the details:

1. Stick to Football is back in-house this week, with our podcast episodes also available on YouTube as a video series. Check out the podcast and subscribe if you haven't already. We will also post a ton of behind-the-scenes content on our Instagram page.