NEW YORK — In the past year, the New York Knicks have been ripped for trading Kristaps Porzingis and getting an underwhelming return. Months later, they were ripped for missing out on Kevin Durant and Kyrie Irving. They were ripped for spending $77 million on free agents, including forwards Julius Randle, Marcus Morris, Bobby Portis and Taj Gibson. Knicks management believed the team would have a good mix of veteran leadership, competition at each position and an improved record from the year before.

Knicks players hear criticism all the time. Playing at MSG means they even get ripped by the execs who brought them together. Following a 21-point home loss to the Cleveland Cavaliers on Nov. 10 that dropped New York's record to 2-8, Knicks president Steve Mills and general manager Scott Perry unexpectedly addressed the media.

"Obviously, Scott and I are not happy with where we are right now," Mills said. "We think the team's not performing to the level that we anticipated or expected [it] to perform at, and that's something that we think we have to collectively do a better job of delivering the product on the floor that we said we would do at the start of this season."

Knicks veterans have preached blocking "outside noise," which isn't easy to do when owning the league's worst record. When a player logs onto social media, watches TV, reads the paper, takes an Uber or cab ride home from a game, greets his doorman or goes shopping, the team is the topic.

The noise can be deafening. The day after the infamous presser, ESPN's Stephen A. Smith blasted the Knicks on his national radio show, saying the team stunk so badly sanitation workers wouldn't have wanted to enter Madison Square Garden. 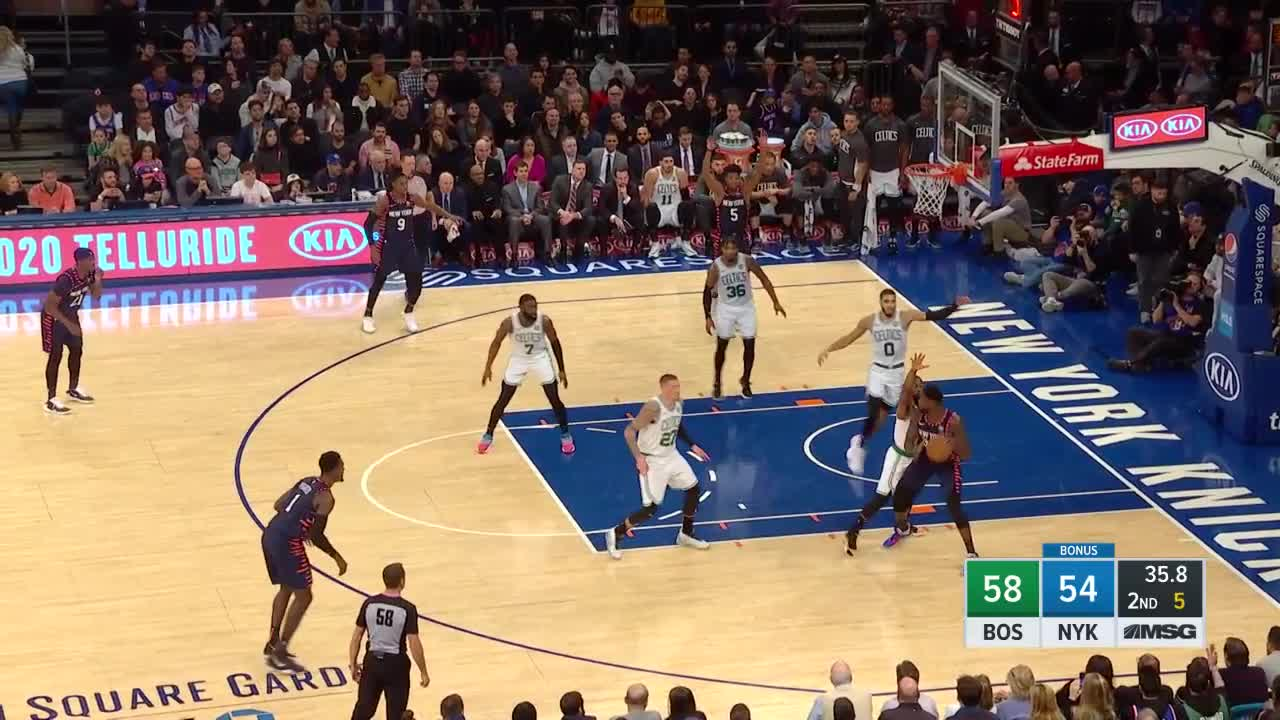 "To have an impromptu press conference in the immediate aftermath of a game, a loss against the hapless Cleveland Cavaliers, you expected to be better?" Smith said. "I believe Steve Mills should be drug-tested immediately for that statement. What the hell you mean you thought you were going to be better? We all knew y'all wasn't going to be. Who didn't know that?"

Following a home loss earlier this season, Dennis Smith Jr. thought he was done answering questions about the game and could begin to reset his mind for practice the next day on a quiet ride home. Instead, he got into an Uber with a driver who didn't realize Smith played for the Knicks, and the driver began ranting about the team's struggles for the entire trip.

"It's just funny hearing it because that's when you realize they really don't know s--t," Smith told Bleacher Report. "They just be talking. That's why it's good to let them ramble. They don't know s--t."

Bobby Portis, the Knicks' 6'10" forward, was strolling through his local grocery store when Knicks fans stopped him earlier this season.

I remember years ago Julius Randle blocked me after I tweeted him to practice free throws He just missed a potential game-tying free throw with 0.1secs left to lose Knicks the game lol 💀 https://t.co/OsSpZ7ZCNe

Julius Randle from the foul line with the game in the balance https://t.co/HDx5HEMSJw

Smith, who was mentioned in one of the tweets, has stayed off social media as much as possible. Last season, he implored teammate Kevin Knox to join him amid a rookie shooting slump.

"I just told him to delete all that [social media]," Smith told Bleacher Report. "Sometimes it's good for you basketball-wise, but I do it a lot for personal life because it's fake. The attention is fake. The love is fake. I think spending too much time being concerned with what other people in the world [think] instead of worrying about what's immediate and what's present right now [isn't healthy]. I'll delete mine just for life reasons, not even basketball, just for my normal life. To be on it is a distraction."

Amid a 1-10 stretch and the dismissal of Fizdale, now would seem like the ideal time for Knicks players take Smith's advice to heart and log off social media to help block out the noise.

You could hear a pin drop in the locker room and see Gibson shaking his head in disbelief following a 44-point loss to Milwaukee on Dec. 2 and a 37-point loss to Denver last Thursday. After Mike Miller's first game as interim head coach and a one-point loss to Indiana, the locker room was in better spirits as players chatted back and forth. Smith says Knicks players eat and watch football together, which helps.

Portis, who is now playing for his fifth head coach in the past 12 months (Fred Hoiberg, Jim Boylen, Scott Brooks, Fizdale and Miller), believes the interactions with fans and criticism from the media are simply part of the territory as an NBA player.

"It's what we signed up for," Portis explained. "It's what we wanted our whole life, so we can't really worry about outside noise. I've been through the same situation last year when there was a coaching change and blocked it out. I've been suspended before and blocked it out. It really doesn't matter. You have to just block it out and move forward and just do your job."

Former Knicks forward Doug McDermott knows these conversations well. After a 17-14 start during the 2017-18 season, New York went 6-18 before the organization traded McDermott to Dallas. Uber drivers wanted an explanation for several close losses during that stretch.

"I'd be like, ‘I don't know. I wasn't in the game,' to just mess with them and stuff like that," McDermott told Bleacher Report. "When it's an Uber driver or a cab driver that doesn't know it's me, I just let it go. I don't participate really. I just laugh it off and say I'm a Nets fan or something just to mess with them."

Knicks players get it just about everywhere.

"I know people always view the Knicks as the laughingstock of the league, but the fans are so passionate, and I think it's just the world we live in," McDermott said. "People are going to be negative about the team. I definitely felt it with my doorman and guys like that who love the game and love watching it."

Michael Scotto is an NBA writer for Bleacher Report and the Associated Press. Seen on NBA TV and YES Network. Heard on ESPN Radio, Sirius XM NBA Radio and WFAN. This is his ninth season covering the NBA. Follow him on Twitter: @MikeAScotto.