The rest of the NBA has been warned.

The Los Angeles Clippers defeated the Boston Celtics 107-104 in overtime on Wednesday at Staples Center in the first game of the season that Kawhi Leonard and Paul George played together. Los Angeles is 10-5 and hitting its stride with three wins in a row just as its two primary playmakers are set to combine forces and compete for positioning in the Western Conference race.

Leonard and George made the headlines, but Patrick Beverley drilled a clutch three-pointer to extend the lead to five with less than a minute in the extra period after Jayson Tatum forced overtime with a long-range shot of his own in the waning seconds of regulation.

Tatum couldn't hit another tying three in the final seconds of overtime, and Leonard blocked Kemba Walker's attempt at the buzzer.

While Boston is still an impressive 11-3 on the season, it has now lost two of its last three games. 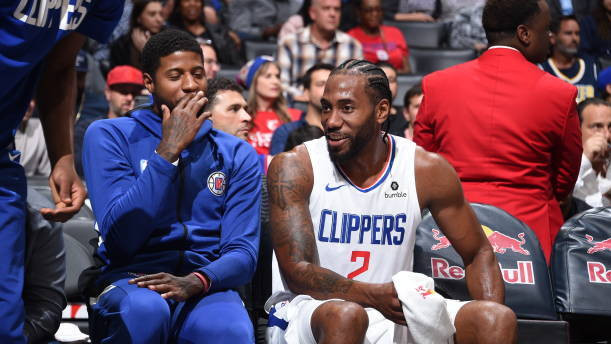 Clippers Hint at What's to Come with New Lineup

The biggest storyline from Wednesday's game, regardless of the outcome, was the debut of a Clippers lineup featuring George and Leonard.

George didn't make his season debut until Nov. 14 as he recovered from shoulder surgery, and Leonard missed his teammate's first three games because of a knee injury. Now that they are together, it doesn't get any better in terms of two-way playmakers who can stretch the floor, attack the basket and guard the opponent's biggest offensive threats.

It's crazy that Kawhi had the ball on the last possession, and I'm sitting here wanting him to pass the ball to Lou Williams. The Clippers are blessed with so many options.

The pairing has a combined eight All-NBA selections, nine All-Defensive selections and nine All-Star nods in addition to Leonard's two Defensive Player of the Year awards and two championships.

Some of the things that could help him win a third were on full display against Boston.

The first two baskets of the game were threes by Leonard and George, underscoring the fact defenses cannot fully commit to one without worrying about the other taking advantage of the open space via jump shots and slashes to the rim.

Kawhi to PG for 3 The first of many (via @NBA) https://t.co/sqe5ZGjdQh

Man, PG's passes to Beverley in the corner have been beautiful

George also hit Beverley in the corner when the defense collapsed multiple times in overtime, while Williams capitalized on the extra space as his own creator.

What's more, the defensive lineups featuring the length of Leonard and George on the wing with Beverley hounding ball-handlers helped hold the Celtics to 1-of-18 shooting from three-point range in the first half.

The scariest part for the rest of the league is the fact there were plenty of growing pains, as evidenced by 23 turnovers—10 of which came from George and Leonard. Once the pairing grows further accustomed to playing alongside one another, this team will have the talent to defeat anyone.

Celtics Prove They Can Compete with League's Best

Boston has clearly made strides since last season's version was plagued with chemistry questions that centered around Kyrie Irving.

Tatum and Jaylen Brown have both taken on significant roles, and Walker has seamlessly fit in at point guard. The result is a head-turning record, even if the visitors lost in heartbreaking fashion Wednesday.

What I like most about these Celtics is Jayson Tatum &amp; Jaylen Brown were always viewed as the assets to get a true superstar, then Anthony Davis spurned them, Danny Ainge was like, “F-it, might as well ride it out with the kids now,” &amp; BOS is hella good with them leading the way

Celtics and Clippers are both throwing haymakers but they both have such resiliency bouncing back. This game has it all. Clutch plays. Wild plays. A poster dunk. Subtle schematic adjustments with Boston doubling Kawhi. And overtime. One of the best games of this young season.

If there was any question about this team, it was that it hadn't played the Los Angeles Lakers, Houston Rockets, Clippers, Denver Nuggets or Utah Jazz before this game. While the Celtics have wins over the Toronto Raptors, Milwaukee Bucks and Dallas Mavericks, they hadn't faced any of the elites in the Western Conference prior to Wednesday night.

Boston answered those questions by overcoming a slow shooting start to build a double-digit lead, weathering Los Angeles' late charge as Marcus Smart and Tatum hit key shots and competing with a loaded Clippers squad until the final shot.

If the Celtics can do that on the road against the Clippers, they can compete against anyone in the Eastern Conference.

It is far from a sure thing that the Bucks and Philadelphia 76ers will be the ones battling for an NBA Finals spot come May.

Both teams are in action again Friday. The Clippers host the Rockets, while the Celtics are at the Nuggets.