California Governor Gavin Newsom announced the signing of the Fair Play to Pay Act on Monday, a bill that will allow a college athlete to profit off their name, image and likeness.

Newsom filmed the signing of the bill on LeBron James' UNINTERRUPTED platform:

"It's going to change college sports for the better by having the interest of the athletes on par with the interest of the institutions." Full conversation with @KingJames, @mavcarter, @ed_obannon, @katelyn_ohashi, @dianataurasi, and @richpaul4 as @GavinNewsom signs #SB206. https://t.co/aIVA2b4bUq

"[The NCAA is] a little panicked because they recognize they're vulnerable. People are hitting this, not just in California, but all across the country because the gig's up. Billions and billions of dollars—$14-plus billion—goes to these universities, goes to these colleges. Billion-plus revenue to the NCAA themselves. And the actual product, the folks that are putting their lives on the line, putting everything on the line, are getting nothing.

"You can only imagine how we're responding to this notion of name, image, likeness and the opportunity now to do what every other student in the university can legally do. And it's the interesting fact: The only people that sign away their right—the only group—are athletes."

The law would go into effect in 2023, barring any holdups in court. The NCAA could file a lawsuit seeking to delay the law or have a higher court overrule it entirely.

The NCAA released a statement following Newsom's announcement, saying the law is "creating confusion for current and future student-athletes": 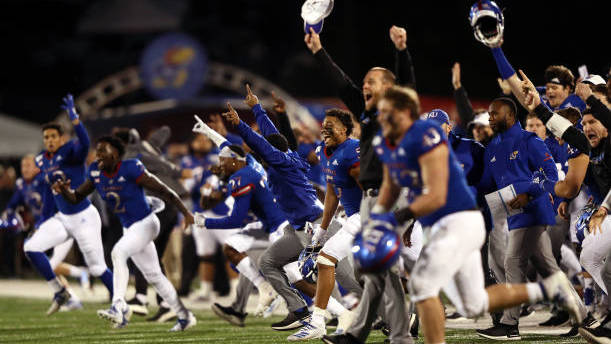 "As a membership organization, the NCAA agrees changes are needed to continue to support student-athletes, but improvement needs to happen on a national level through the NCAA's rules-making process. Unfortunately, this new law already is creating confusion for current and future student-athletes, coaches, administrators and campuses, and not just in California.

"We will consider next steps in California while our members move forward with ongoing efforts to make adjustments to NCAA name, image and likeness rules that are both realistic in modern society and tied to higher education.

"As more states consider their own specific legislation related to this topic, it is clear that a patchwork of different laws from different states will make unattainable the goal of providing a fair and level playing field for 1,100 campuses and nearly half a million student-athletes nationwide."

The Pac-12 also issued a statement (h/t Nicole Auerbach of The Athletic), saying it was "disappointed" in the passage of the bill, adding it believes the legislation will "have very significant consequences for our student-athletes and broader universities in California."

"We will work with our universities to determine next steps and ensure continuing support for our student-athletes," the conference added.

Bills have also been introduced in New York and South Carolina. As momentum crests in the direction of allowing players to profit from their likeness, it's possible these state bills will create pressure for a national law to go into effect. A nationwide law would avoid the potential for certain states to write legislation that give some student-athletes an advantage over others.

Players currently considering where to attend college—particularly star athletes—are theoretically more likely to attend a California university where they could make money off their likeness in addition to attending on a scholarship.

James said the main reason he chose to declare for the NBA out of high school was in order to provide for his mother. He added it would have been "fun" to play collegiately and that a law like this could have had an impact on his decision.

"To every one of you who have been in this fight (and there are a lot of you)- take a bow and be proud!!!! NCAA, you got the next move. We can solve this for everyone!" LeBron said in an Instagram post Monday.

Former UCLA gymnast Katelyn Ohashi, whose floor-exercise routine went viral earlier this year, spoke of the difference between perception and reality in her fame.

"It's so crazy. People are like 'Oh, you must be so rich.' And I'm like, 'You must not know the NCAA, right? Like...what?'" Ohashi said. "But no one pays attention to that. No one understands it. When my routine went viral, [NCAA President] Mark Emmert called me to congratulate me, and I'm like, 'You should be thanking me.'"

Dream clashes we're hoping for in the playoffs 🤞