Restricted free-agent forward Kelly Oubre Jr. has agreed to re-sign with the Phoenix Suns for two years and $30 million.

Oubre Jr., gets financial security now with an opportunity to return to the marketplace as a 25-year-old unrestricted free agent in 2021. https://t.co/NPL1fT1iHr

The Suns previously extended a qualifying offer to Oubre on June 26.

Oubre, 23, averaged 20.2 points, 5.7 rebounds and 2.1 steals in 12 games after the Suns named him a starter after the All-Star break. Phoenix went 6-6 in that span, which included wins over the 60-22 Milwaukee Bucks and the defending NBA champion Golden State Warriors.

The Suns went 13-57 otherwise, so putting the forward in the starting lineup clearly rejuvenated Phoenix. However, he suffered a left thumb injury and was forced to miss the season's final 11 games.

For the year, Oubre averaged 15.2 points, 4.7 rebounds and 1.2 steals on 44.5 percent shooting for the Washington Wizards and Suns. 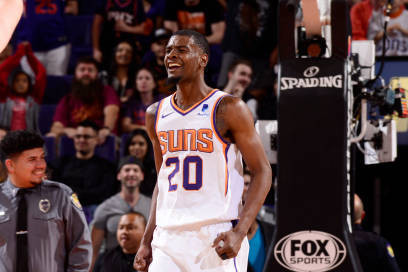 Oubre's second-half performance could foreshadow a significant breakthrough for the 15th overall pick in the 2015 NBA draft, though the question is whether he'll continue his torrid pace. If so, the Suns would be getting a steal.