PORTLAND, Ore. — The phrase "point-nine" needs no introduction in Portland.

Damian Lillard's series-winning buzzer-beater to lift the Trail Blazers over the Houston Rockets in 2014—a broken-play three over Chandler Parsons with nine-tenths of a second remaining—is immortalized in the back hallway of the Moda Center and has become part of the fabric of the team and the city. It was, without question, the single biggest shot in Blazers franchise history.

As time expired in Game 5 of the Blazers' first-round series against the Oklahoma City Thunder, with the score tied at 115, Lillard dribbled past half court and found himself isolated against Paul George. As has become routine for him, he calmly took a step back—37 feet from the basket—and drained the biggest shot of his life, sending the Thunder home for the summer and the Blazers to the second round of the playoffs for the first time in three years.

Lillard didn't celebrate after the shot went in. He turned around, stone-faced, and gave a little wave to the Thunder bench that had been talking so loudly the entire series and then allowed himself to be engulfed by teammates and team staffers.

"It's been a lot of back-and-forth," Lillard said afterward. "A lot of talk and all this stuff, and that was the last word. That was having the last word." 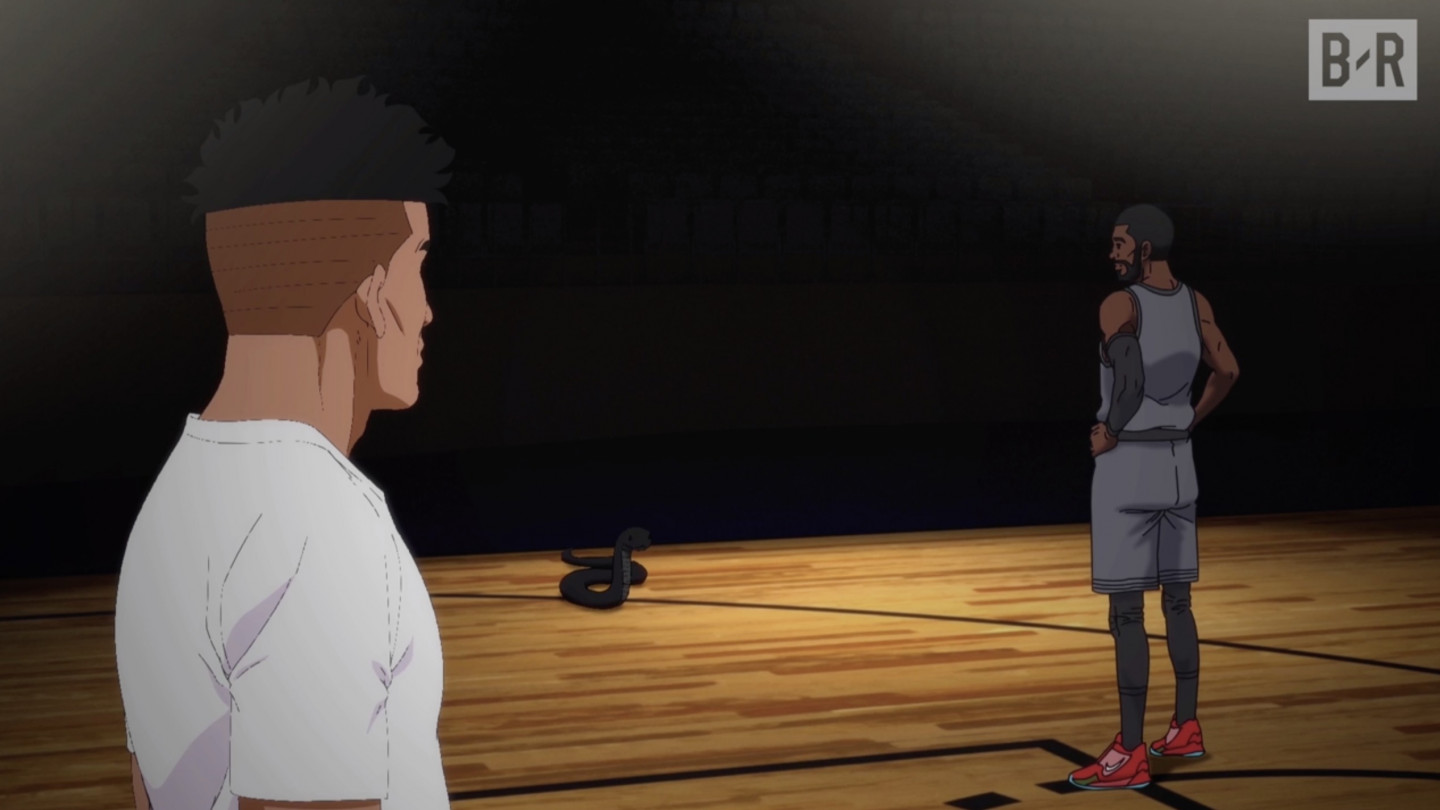 George called it a "bad shot," and for anyone else, it would have been. But don't get it twisted: the entire arena knew from the moment the ball left Lillard's hand how this would go. No one in the NBA other than Stephen Curry has a reputation to rival Lillard's when it comes to making these kinds of shots.

"With about eight [seconds] on the clock, I said out loud, 'We've seen this too many times before,'" Blazers center Meyers Leonard said. "'This is going to be unbelievable. He's going to make this shot, and we're going to move on to the second round.' And sure enough."

The series-winner gave Lillard 50 points, a new playoff franchise record, and Portland needed every last one of them. At halftime, he had 34 of the Blazers' 61 points. Foul trouble limited CJ McCollum to just nine first-half minutes, forcing Lillard to play every second of the first three quarters.

As Lillard's teammates struggled early to make shots, he took it upon himself to keep pace with the Thunder. And he just kept delivering, right up until the end.

"Once the Blazers got the stop on the last possession, I stood up," Blazers television color analyst Lamar Hurd told Bleacher Report, standing amid the frenzy of onlookers and hangers-on surrounding Lillard as he left the arena with his one-year-old son, Damian Jr., draped over his shoulder.

He added: "I knew somebody was going to take the last shot. I figured it would be Dame. When it first left his hand, I wasn't sure if it was going in, just from the nature of it being a 40-foot stepback shot. But then as it gets closer, you're tracking as it gets to the rim, and you're thinking, 'This has a chance.' You know nobody can rebound it. He'll either make it or we'll go to overtime. And the moment it went in was the most incredible basketball moment I've ever witnessed."

Hurd wasn't on the Blazers' broadcast team yet in 2014, when the "point-nine" shot happened. But longtime team employees, coaches and media members who saw both were in agreement: Tuesday night was bigger. 2014 was Lillard's first career playoff appearance, and he didn't know enough at the time to understand what a shot like that meant. He delivered the Blazers' first playoff series win in 14 years and put himself on the map nationally.

This one matters more because it completely rewrites the story of Lillard's career. Since "point-nine," his postseason record has been filled with disappointments and early exits. Even their last series win, against the Los Angeles Clippers in the first round in 2016, comes with the caveat that the Clippers were without Chris Paul and Blake Griffin for most of the series.

Rock bottom was last year's humiliating sweep at the hands of a lower-seeded New Orleans Pelicans team that the Blazers still feel shouldn't have happened. It wasn't just a disappointing result for the team, it was Lillard's worst individual playoff performance. Over the four games, he averaged just 18.5 points per game and shot 35.2 percent from the field and 30 percent from three.

Losing in four games to the eventual champion Golden State Warriors in 2017 was one thing; Lillard's poor showing in the Pelicans series didn't sit well with anyone, least of all him. It led to just the sort of widespread skepticism that always finds players like Lillard and teams like the Blazers when they fall short.

Will the Blazers ever be more than a solid regular-season team without the star power to contend?

Can Lillard really be considered among the greats of today's game if he can't get past the first round consistently?

If Lillard doesn't win in Portland soon, should he think about trying to maneuver his way to a bigger market with bigger-name teammates?

Tuesday night, Lillard sent the message that he doesn't care about any of that stuff, that he's ready to rise above it. Really, he's been sending messages all series. He certainly sent a message to Russell Westbrook that he wasn't here for the trash talk and would rather shut the Thunder up with his play.

The Blazers had every reason to go in a different direction after a few disappointing playoff exits in a row. General manager Neil Olshey could have traded McCollum for younger players and draft picks, setting the team up for the future but breaking up the dynamic backcourt that had seemingly reached its ceiling. That's what many fans had been calling for for months.

They could have fired head coach Terry Stotts, the only coach Lillard has ever known in the NBA, with two consecutive first-round sweeps as plenty of justification, ignoring Stotts' stellar reputation among his players and consistent track record of staying competitive in a tough Western Conference. They could have even looked to move Lillard for a king's ransom of rebuilding assets, blow it up and start over.

But Olshey chose to stay the course, in large part because of the organization's trust in Lillard to be the catalyst for this group to remain in the fight.

The Blazers have faced no shortage of adversity this season, beginning with the tragic death of owner Paul Allen shortly before the start of the season and ending with starting center Jusuf Nurkic's gruesome, season-ending leg injury in March.

Allen's courtside seat has been empty all season in tribute, but Nurkic put in a surprise appearance Tuesday that may have been just the boost the Blazers needed. He drove to the Moda Center during the game and joined the team on the bench with just over three minutes remaining, with the Blazers trailing by eight points and staring at a return trip to Oklahoma City.

The atmosphere changed when Nurkic's face was shown on the video board. His absence had already become a rallying point for the fanbase, which crowd-funded a billboard near the arena to show their support after his injury. Seeing him on the bench proved to be just the push the Blazers needed, and they went on a 13-2 run to close the game and the series.

"I'd love to see what his plus-minus was tonight," Lillard joked.

The Blazers' ability to get past all of this uncertainty starts with Lillard. He would have had every right to ask for a trade if he felt like this group had maxed out its potential, but he didn't.

If he had wanted a change in the head coach's chair, well, it wouldn't have been the first time a star player had agitated for that. But he's believed in Stotts from the beginning. His effect on this organization has been Tim Duncan-like: When the best player on the team is also the hardest worker and believes in the coach and the culture, what choice does everyone else have but to fall in line behind him?

"My message has been the same from the moment we got swept," Lillard said. "I just kept saying when you go through stuff like that, in our locker room, we've got good people. We've got a great environment every day. We do things the right way, and we work hard. We do everything to give ourselves the best chance.

"To go into the playoffs last year and have that type of experience, in my mind, I didn't feel bad for myself. I was like, 'I'm going to accept responsibility that we didn't play well.' … In my mind, I was just like, something down the road is going to work out for us if we just stay with it and keep our minds right. I think this is the beginning of that."

The final shot will be replayed forever when Lillard's name comes up, but it was only the culmination of a career-defining night. By now, he has everything else—All-Star and All-NBA accolades, a high-profile shoe deal, a surprisingly respectable rap career, the respect of his peers and love from the city of Portland (not to mention a growing leaguewide spotlight).

But Tuesday, he showed that, yes, he does have enough to win on a meaningful level in Portland with this group. "Point-nine" was just an appetizer. This one, with these stakes for him and the team, matters so much more.

Sean Highkin covers the NBA for Bleacher Report. He is currently based in Portland. Follow him on Twitter, @highkin.