Kliff Kingsbury left the job of USC offensive coordinator long before getting a chance to coach in a single game in 2019, so the Trojans are turning to another former NFL and Texas Tech quarterback to fill the position.

The position was open after Kingsbury accepted the head coaching job with the Arizona Cardinals, and Harrell has a similar background. He played quarterback for the Red Raiders and made the NFL, although he played in just four games as a member of the Green Bay Packers.

Mac Engel of the Star-Telegram noted North Texas planned on offering Harrell a raise in an effort to convince him to stay after he turned down an offer to join North Carolina's staff, passed on interviewing at Florida State and drew the interest of USC.

That raise would have brought his annual salary to around $300,000, although Engel noted USC reportedly offered Kingsbury more than $1 million per season. The money and notoriety with the Trojans simply trumps what North Texas can offer.

North Texas won nine games in each of the last two seasons with Harrell helping operate the offense. It was a drastic turnaround after the program dealt with losing seasons in 11 of the prior 12 campaigns.

The Mean Green were 20th in the country in total yards per game in 2018 and 24th in 2017, employing an Air Raid attack with Harrell that found consistent success. USC clearly had that type of approach in mind when it hired Kingsbury, so this hiring follows.

The Trojans were just 5-7 last season and were 84th in the country in yards per game, so they will need to make significant strides under Harrell to return to national prominence.

Another grad transfer headed to USC 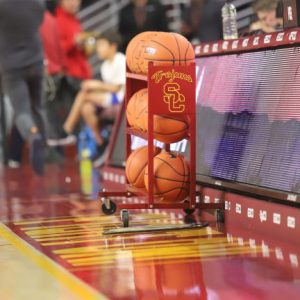 Another grad transfer headed to USC