The New York Knicks made it clear over the summer: This season would not be about chasing wins or selling out to end their five-year playoff drought. The goal would be to lay a foundation, evaluate the team's crop of young players and—although it's never quite been officially stated—clear enough cap space to sign a certain All-Star free agent away from Golden State.

On the court this season, the Knicks have been a disaster. At 10-36, they own the second-worst record in the NBA. Opponents have outscored them by 7.9 points per 100 possessions, the fourth-worst mark. Most troubling, though, is how the losses have piled up, and that number has gotten worse as the season has inched along.

Publicly, the Knicks say they're fine. They're rebuilding. They're resetting the culture. At night they sometimes just dim the lights, hold hands and sing Kumbaya.

"All of our kids are getting better," is how head coach David Fizdale phrased it Wednesday night following the Knicks' 114-110 home loss to the Houston Rockets.

Is he right? And are the Knicks in a better position today than they were a year ago? 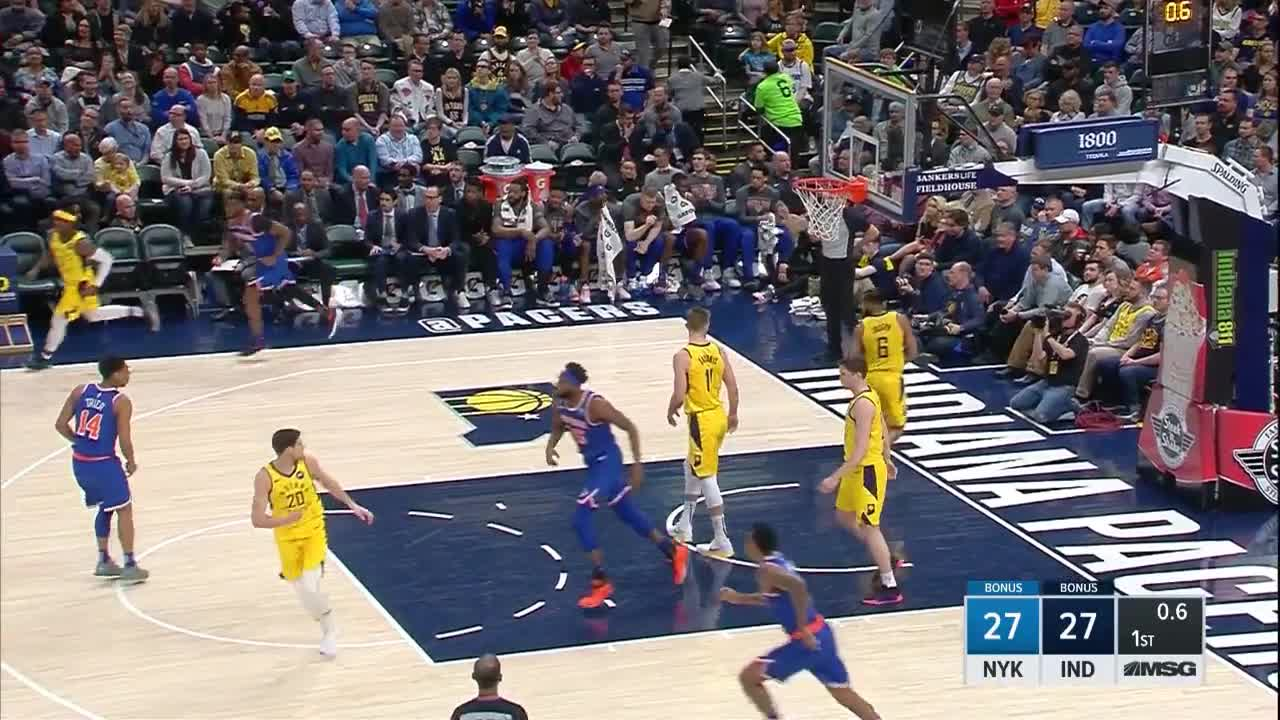 Again, ask the Knicks, and they'll adamantly assure you they are. They'll point to the improvements of former lottery picks Emmanuel Mudiay and Noah Vonleh, the emergence of rookies Allonzo Trier and Mitchell Robinson, and the continued development of rookie Kevin Knox.

When it comes to Vonleh, they deserve credit.

He was drafted ninth overall in 2014, and had been dumped by three teams before the Knicks scooped him up on a one-year deal in free agency. In New York, Vonleh has rebranded himself as a versatile 4, perfectly suited for the modern age. He's 6'9", can handle the ball and can effectively guard multiple positions. He's even drilled 40.9 percent of his deep balls this season, a 10 percent uptick from last season.

Which is all great. It's just unclear how this helps the Knicks' long-term plans.

As currently constructed, they don't have enough cap room to ink a max-level free agent. To get there, they'll have to renounce the rights to all their free agents over the summer and shed the contracts of either Tim Hardaway Jr. or Courtney Lee, which they're having difficulty doing. It might take a sweetener, such as a young player or a future draft pick, to get a deal done.

They'll have to renounce Vonleh, whose Bird rights (meaning the ability to go over the salary cap to re-sign him) they don't own. His improvement has impressed opposing coaches and scouts, and he'll garner interest over the summer and likely receive offers the Knicks won't be able to match if they're successful in their chase for stars.

The good news is they won't have the same issues with Mudiay, but that's because other teams aren't buying into his rejuvenation the way the Knicks have.

Mudiay is putting up the best numbers of his career. He's trimmed his turnovers despite handling the ball more frequently and is scoring at a more efficient rate. There's a reason the Knicks have been 1.7 points per 100 possessions better with him on the floor, according to NBA.com.

Forty-one percent of his shots have come at the rim this season, a mark that places him in the 85th percentile among point guards, according to Cleaning the Glass. He has an uncanny ability to knife his way into the paint.

The problem is what he does upon getting there. He's finished just 55 percent of his looks at the rim, a way-below-average mark. There's an argument to be made that the frequency with which Mudiay gets to the basket makes up for his struggles finishing in the paint. It can create better looks for others, keep a defense honest, and the math can start to tilt in the Knicks' favor as the number of attempts increase.

He hasn't reached that point. Mudiay hasn't quite figured out the nuances of attacking the hoop. Too many of his drives end with sloppy turnovers or off-balance heaves, which kills New York on the other end. The Knicks have surrendered 13.9 fast-break points per 100 possessions when he plays compared to 10.6 when he sits, per NBA.com. That's the largest drop-off on the team.

There's a belief around the league that Mudiay's numbers are mostly inflated. Empty numbers on a bad team. Like Vonleh, Mudiay will also be a free agent this summer. His cap hold is $12.9 million, a ridiculous number the Knicks will certainly renounce.

The good news is they might be able to get him back on another cheap deal next season. When asked what they thought his market would be this summer, multiple personnel men from opposing teams brought up Elfrid Payton, a 2014 lottery pick who was forced to settle for a one-year, $3 million deal this summer.

Still, it's been strange seeing the Knicks pump up Mudiay compared to how they've yanked Frank Ntilikina in and out of the rotation. Ntilikina, last year's first-round pick and just 20 years old, is already the Knicks' best perimeter defender. Yeah, he remains too timid on offense. His jumper remains flat. His 30.2 percent rate on three-pointers is a problem.

But solid 6'6" defenders aren't easy to find, and every roster needs players willing and comfortable in not being the No. 1 option, especially ones building around two scorers in Kristaps Porzingis and Kevin Knox and hoping to lure a third.

Because as much as the Knicks like to tout their player-development program—and again, they do deserve credit here—and as much as we like to analyze the performances of surprise rookies like Trier or reclamation projects like Mudiay, NBA success is determined by the top of the roster.

For the Knicks, that means nurturing Porzingis back to the floor. It means putting in the time to keep Knox from developing into a scorer who gives back even more points on defense (according to the metric defensive plus-minus, Knox is the fourth-worst defender in the NBA). It means making sure they remain in a position where they can nab a top pick in this year's draft.

It means Fizdale figuring out how to coach defense in a way that keeps the Knicks from continuing to operate as the league's second-worst unit. The talent might not be there, but the Knicks also rank toward the bottom of the league in surrendering both looks at the rim and from the corners. Those are the two shots every defense should be aiming to take away and two shots that can be limited with simple tweaks to a scheme.

There are a ton of rebuilding teams that would trade everything they have for a core of Porzingis, Knox and a 2019 lottery pick. The Knicks are on the right path. They deserve credit for that, no matter how much luck played into it. And goals like building a program are great. But it's also the sort of thing that usually follows winning—rare does it precipitate a turnaround.

So are the Knicks better off now than they were this time last year?

They're younger. There's less drama. Coaches and management appear to be on the same page. The answer is yes.

Does that mean they're on the path to being a contender?

That's a question for July.