LOS ANGELES — If coach Luke Walton's position is in any sort of trouble, the Los Angeles Lakers' Tuesday signing of Tyson Chandler should give Walton both job security and the missing piece of his rotation.

Chandler, who hasn't averaged double-digit points since 2014-15 (10.3 PPG), is the exact kind of role player LeBron James and company need to compete in the Western Conference.

Starting center JaVale McGee has been tremendous through 10 games, averaging career highs with 14.4 points and 3.4 blocks. But McGee can only give Walton so many minutes; he's currently at 26.2 a game, a sizable jump for the 30-year-old, who averaged roughly 10 minutes per contest over the previous four years.

Behind McGee, the Lakers have tried to develop small-ball options with Kyle Kuzma, James and, briefly, Michael Beasley. Ivica Zubac, who is a true center, hasn't developed enough to give Walton a reliable option. He gave good minutes against the Portland Trail Blazers but collected five fouls in five minutes against LaMarcus Aldridge and the San Antonio Spurs.

Walton was forced to turn to 6'9" undrafted rookie Johnathan Williams on a two-way contract to staunch the bleeding. Williams showed some flashes, but the Lakers were desperate for an experienced center to spell McGee. 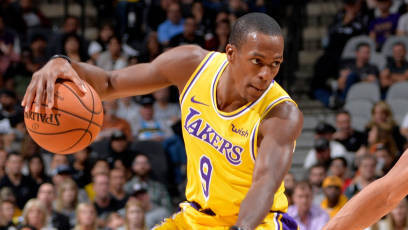 "Having observed our roster for the first 10 games of this young season, one of the areas that Earvin ['Magic' Johnson] and I discussed with Luke that we desired to upgrade is interior defense and rebounding," general manager Rob Pelinka said in a more-detailed-than-usual statement.

That L.A. was so thin on paper at the center position was a puzzle before the season began. Chandler, who was waived by the rebuilding Phoenix Suns, is a tremendous pivot by the Lakers.

Chandler, who won the NBA's Defensive Player of the Year award in 2011-12 and a title with the Dallas Mavericks in 2010-11, has been killing time in recent years with the Suns. At 36 years old, Chandler isn't as springy as McGee, but he plays a similar style offensively as a willing screener who rolls hard to the basket. He's also a lob threat and rim runner.

But the Lakers didn't get Chandler for his offense.

Los Angeles is scoring 118.9 points a game this season, among the best in the league. The bigger issue is the 120.0 it gives up.

Chandler hasn't forgotten how to play at a high level defensively. He may not be as mobile as he was in his younger years, but he will certainly be as effective (likely more so) as Brook Lopez was last year defensively.

Additionally, Chandler is a prolific rebounder, averaging 9.1 rebounds a game in just 25.0 minutes last season and 11.5 in 27.6 the year before.

The Lakers only need Chandler to provide 10 to 20 minutes a game. Along with McGee, Walton can run out true centers defensively for most of the game. For the remaining minutes, Walton can use small-ball lineups when the Lakers have the advantage.

Dating back to July, the Lakers were eager to see their version of the "Death Lineup" with Brandon Ingram, Lonzo Ball, Josh Hart, James and Kuzma sooner rather than later. Ingram's four-game suspension after tussling with the Houston Rockets hasn't given Walton much of a chance to experiment, but without true impactful size behind McGee, the Lakers have been forced to go small.

What should have been a situational advantage turned into a liability as small ball became the only answer. Now, Walton has options and James has enough veteran help defensively that the Lakers should be able to hold on to leads.

Outside of the blowout loss Sunday to the Toronto Raptors (the 121-107 final score barely reflects how badly the Lakers were beaten), the team has been in every game it's played. Five of their six losses slipped away late.

Despite their 4-6 start, the Lakers are on par with the Rockets (4-5) and New Orleans Pelicans (4-6) and just slightly behind the Oklahoma City Thunder (5-4) and Los Angeles Clippers (6-4). The Lakers have faced a heavy schedule early in the 2018-19 season, which will balance out over the coming weeks.

The addition of Chandler will pay immediate dividends. Walton will get his team to thrive with roster balance for a full 48 minutes. With Chandler alongside a talented and powerful player like James, it won't take a lot for the Lakers to improve significantly. Chandler represents the missing ingredient as a defender and rebounder who will help the team climb up the standings.