Duke continued its preseason tour of Canada with a 96-60 win over the University of Toronto Varsity Blues at the Paramount Fine Foods Centre in Mississauga, Ontario, on Friday night.

As was the case Wednesday against Ryerson, freshmen Zion Williamson and R.J. Barrett paced the Blue Devils offense in a big way.

Barrett led all Duke scorers with 35 points, while Williamson added 24 points and eight rebounds as the pair connected for countless highlights in the open floor.

In 2 games, Duke scored 162 points with R.J. Barrett and/or Zion Williamson on the floor. The freshman duo scored 122 of them (75%). That, without the injured Cam Reddish (3rd-ranked prospect) and Tre Jones (17th). This Blue Devils team is going to be scary.

Those two got the party started when Barrett fed Williamson for a transition lob in the first quarter:

Get used to seeing this. R.J. ➡️ Zion! #DukeCanadaTour https://t.co/vo6yRfIS8Z

As it turns out, the early aerial acrobatics foreshadowed how things would play out the rest of the way.

Not even a quarter in I'm nearly sold on Zion Williamson. Man. Some horrible team that doesn't draw any fans needs to draft him. He's not only good, but also a show stopper.

It’s very, very early but given the spacing of the NBA game, Zion Williamson has a chance to be a monster. As explosive an athlete as we’ve seen in sometime. Passing &amp; handling skills very good for an M1A1 Tank.

Williamson punished the rim (and smaller defenders) throughout the wire-to-wire blowout, and his array of dunks was a sight to behold:

Zion Williamson throws it down!! https://t.co/i1Gv327ADk

Zion Williamson is putting on a show! https://t.co/yy4LCY7mrz

Not to be outdone, Barrett blitzed Toronto from all angles.

Beyond his own flurry of slams and smooth finishes in traffic, the nation's No. 1 recruit looked sharp on the defensive end.

Barrett flashed active hands and disrupted passing lanes on several occasions to create easy opportunities on the break, and he showed encouraging awareness down low when he rotated over from the weak side for a ferocious second-quarter block:

🇨🇦 RJ Barrett (@RjBarrett6) getting the job done on both ends of the court! 👀 https://t.co/MAyR4RSL18

Williamson and Barrett will undoubtedly find buckets a bit harder to come by once college defenses have time to game-plan and poke holes in their games this fall, but at this point, it's clear their athleticism will be overwhelming for long stretches.

And with a supporting cast that includes fellow 5-star commits Tre Jones and Cameron Reddish along with vets like Javin DeLaurier and Marques Bolden, it's safe to say the Blue Devils will field one of the most talented and entertaining squads in recent memory.

Williamson, Barrett and Co. will play their final exhibition game in Canada on Sunday when the Blue Devils square off against McGill University in Montreal. 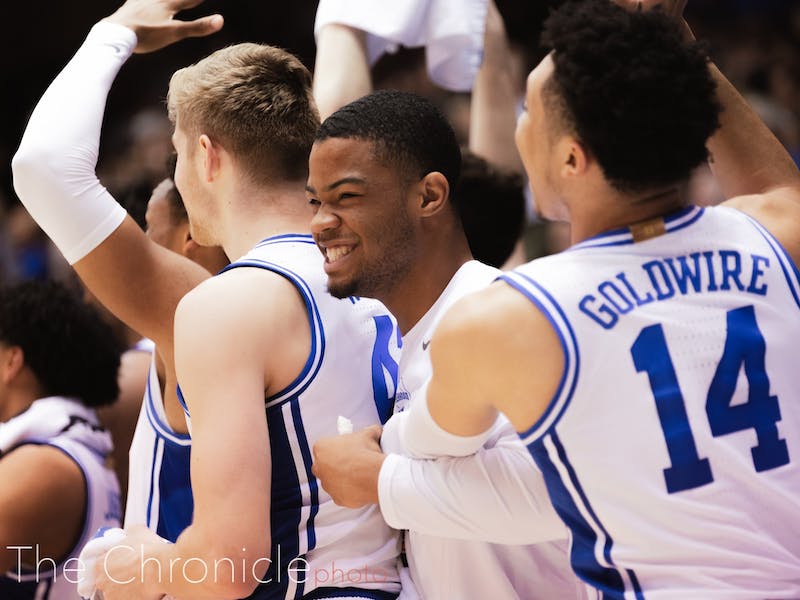