From the moment the Baltimore Ravens traded up into the first round of the 2018 NFL draft to select Louisville quarterback Lamar Jackson, the pick was hailed as a savvy move by general manager Ozzie Newsome. The wildly athletic 2016 Heisman Trophy winner was viewed as the future under center.

Some even started the countdown clock for the end of the Joe Flacco era. It was just a matter of time before Jackson was handed the reins.

For his part, head coach John Harbaugh has steadfastly maintained that Flacco is the starter for the foreseeable future. That's a good thing, even if Flacco's name and the word "good" haven't occupied space in the same sentences much over the past couple of seasons.

While Jackson has shown flashes of the electric talent that made him must-see TV while in college, he has also demonstrated something else.

He isn't close to starting in the NFL.

After Flacco led the Ravens on a long touchdown drive in last Thursday's blowout exhibition win over the Los Angeles Rams, it was Jackson's turn to see his second game action of 2018.

To be fair, there were some highs. After tailback Alex Collins peeled off a long run, Jackson connected with wide receiver Chris Moore on a 36-yard strike where he dropped the ball into a tight window:

And it was what happened a few plays later that got everyone talking. After dropping back to pass on 3rd-and-5 from the Rams' 9-yard line, Jackson broke ankles and evaded would-be tacklers on a touchdown scamper:

Flacco cannot do that.

Jackson told reporters after the game he was just doing what he does best: "I dropped back, everyone was covered on that play, and the line had a little...I'd say a little...ah, they tried to get to me, I'm just gonna say that. I made a guy miss and tried to do what I do best. Tried to get into the end zone."

The run made an impression on Harbaugh, who said: "I thought he was tackled twice, and then he wasn't. So that was good. You always appreciate that if he's on your team."

That was Jackson's lone touchdown, but he did guide the Ravens to three field goals. He appeared more comfortable leading the offense than in the Hall of Fame Game and finished the evening with 140 total yards.

That was the good news. And it was good news—Jackson improved. That's the name of the game with young players.

The bad news is that Jackson's highlight-reel run overshadowed another shaky performance throwing the ball. For the game, he hit on just seven of 18 pass attempts for 119 yards. Just as in his preseason debut, his accuracy was as much miss as hit, with more than one throw sailing on him. He's now connected on under 40 percent of his passes through two games, and his passer rating sits at 54.5.

Jackson also held the ball too long on occasion (he was sacked twice, bringing his total in the preseason to an eyebrow-raising five) and had to burn timeouts on successive drives because of communication issues and/or confusion at the line of scrimmage.

There were signs of optimism. And reasons to temper it...just as there were in the Hall of Fame Game. Jackson connected on his first passing touchdown in that outing, but going 4-of-10 for 33 yards in a half isn't an impressive stat line, especially when that includes an interception:

In fairness, it can be argued the receiver should have come back harder for that pass. But NFL quarterbacks have to know the defensive back is going to try to jump that route. They can't hesitate to let the pass go or put it too far to the inside.

As Aaron Kasinitz reported for Penn Live, Jackson knows that in hindsight.

"Just getting back, hesitating a little bit on the throw," Jackson said. "In the league, you can't do that. Everyone's a lot faster. It's not college."

To say Jackson isn't ready to start in a game that counts isn't an indictment. It's just a reminder of something we already knew. But it's also something that needs to be repeated every time he flashes his prodigious athletic ability and makes a defender look silly.

It's hardly a state secret that Jackson is the most dangerous running quarterback in some time. Runs like the one Thursday have evoked comparisons to a young Michael Vick, and with good reason.

But it's equally well-known that Jackson is a long way from being a finished product throwing the ball. Accuracy as a passer wasn't his strong suit in college, as his career completion rate was just 57 percent.

There are glimpses. Plays here and there that show off Jackson's arm talent and ability to improvise in the pocket:

But touch passes, reading defenses and even taking snaps under center are all relatively new concepts for Jackson. As such, it's not surprising there have been areas in which he's struggled—and even less surprising that consistency is one of them. That for each throw that hits the mark there's one that's high or skips in.

Consistency is one of the most important qualities a quarterback can have. It's far more useful to be able to make routine 15-yard throws 10 times out of 10 than to be able to whip it 75 yards.

The Buffalo Bills may be about to find that out the hard way.

It's helpful that Harbaugh has insisted from the get-go that Flacco will be the team's starter. It's even better that Flacco and the first-team offense looked so polished in limited action against L.A.

That's not because a sharp Flacco makes the Ravens a Super Bowl contender. Baltimore's ceiling in 2018 is around 10 wins, and while the Ravens might be strong enough to make the playoffs for the first time since 2014, it's hard to imagine them making a deep postseason run.

But as long as Flacco plays at least relatively well, Harbaugh and the Ravens won't be tempted to throw Jackson to the wolves. Baltimore talk radio won't be dominated by caller after caller imploring the team to roll Jackson out there.

As it is, there will be enough of that every time Jackson makes a "wow" play in the preseason. Or if the Ravens follow through with plans to devise special packages for Jackson—perhaps with both he and Flacco on the field.

That last one is as bad an idea as rushing Jackson into action under center. Maybe worse. Either Jackson is ready to be Flacco's understudy and Robert Griffin III's expendable, or he isn't and he should begin his NFL career as an emergency quarterback who isn't even active on Sundays. Adding more plays to his plate (plays that could cost him valuable practice reps at quarterback) will work out just about as well as every other "gimmick" quarterback has.

Jackson may be the future in Baltimore, and it's possible his shake-and-bake on Thursday was a sneak preview of the league's next great dual-threat QB. And that all the teams that passed on him for another quarterback in April will one day kick themselves.

But as great as that run was, in order to succeed in the NFL as a dual-threat QB, you have to be a dual-threat. Opponents have to fear a quarterback as much for his arm as his legs.

Where the former's concerned, Jackson made some progress against the Rams. But he also still has a significant way to go. 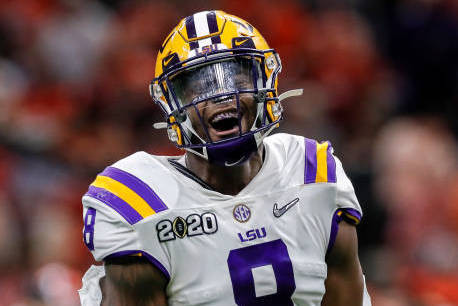 Calais Campbell opted to play for Ravens despite underlying condition

Calais Campbell opted to play for Ravens despite underlying condition