When Cristiano Ronaldo bagged his fourth Ballon d'Or trophy on Monday, it hardly came as a surprise. After winning the UEFA Champions League with Real Madrid and Euro 2016 with Portugal, his win was a foregone conclusion.

In more of a surprise, Borussia Dortmund's Pierre-Emerick Aubameyang came in 11th, per Eurosport.com's Dan Quarrell, making the 27-year-old the highest-ranked Bundesliga player on the list.

Given his Black and Yellows failed to win any silverware in the 2015/16 season and the Gabon international had no summer tournament to make an impression on voters—unlike Bayern Munich's Robert Lewandowski and Arturo Vidal, who came in 16th and 14th, respectively—Aubameyang's ranking seems somewhat curious.

It was only the second time a Dortmund player received any votes in the Ballon d'Or ranking since 2010, with Lewandowski coming in 13th in 2013, when his four goals against Los Blancos in the semi-finals paved the way for the Ruhr side's reaching the Champions League final against Bayern in Wembley.

It is hardly shocking BVB players have not received many votes over the last few years, seeing as Dortmund are a comparatively small club in the global context and they have not won a major trophy since the DFB-Pokal in 2012.

Winning the most prestigious individual award was out of the question over those years anyway, with the incredible Lionel Messi and Ronaldo splitting the spoils since 2008.

However, the duopoly of the two all-time greats will have to come to an end at some point in the not-too-distant future, as Sam Pilger detailed for Bleacher Report. The Argentine will be 30 at the end of the season, and Ronaldo turns 32 in February.

Neither shows too many signs of slowing down, but, eventually, father time catches up to everyone. It will open up the Ballon d'Or to a wider range of players, and Dortmund have one man in their ranks who could benefit.

Ousmane Dembele has been tipped to win the award at some point during his career before, and he certainly fits the bill as a potential laureate down the road, as B/R's Dean Jones suggested in the video below: 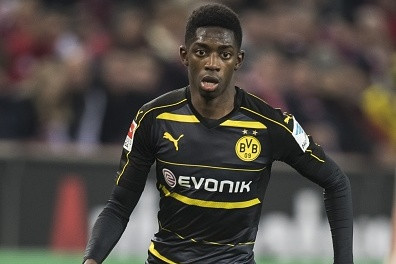 Former Premier League defender Mikael Silvestre put the Ballon d'Or into play for Dembele in January 2016, telling French paper France Football (h/t Andrew Gibney of FourFourTwo.com): "I'm going to go out on a limb here and say that he can win the Ballon d'Or. I saw Cristiano Ronaldo at the same age at Manchester United, and Ousmane has the characteristics that remind me of a young Cristiano."

At the time, Dembele was an 18-year-old with only a handful of Ligue 1 matches for Stade Rennes under his belt, but his career trajectory over the last 11 months lends credence to Silvestre, Rennes' sporting director.

Capturing his signature was a massive success for Dortmund, who beat out interest from Chelsea, Arsenal, Manchester City, Leicester City, Liverpool, Barcelona and Bayern, per Ed Aarons of the Guardian.

Dembele signing for Dortmund a coup for the Bundesliga. Shows BVB's determination, and the appeal league has to players beyond Bayern.

The 19-year-old has largely made good on his incredibly promising talent during his first few months at the Westfalenstadion, a few natural hiccups and up and downs notwithstanding.

He has been fairly productive with four goals and a team-leading 10 assists across all competitions, while playing more minutes than all but four team-mates, per Transfermarkt.com. Only defensive leader Sokratis Papastathopoulos, Aubameyang, midfield metronome Julian Weigl and utility man Matthias Ginter have played more than Dembele.

Those numbers are impressive for such a young player, especially considering the circumstances of a move to a different country, culture and league—and a much bigger club. Even more impressive, though, is the manner in which the Frenchman has developed during his short time with the Black and Yellows.

He has made important strides as a team-player, contributing more and more to the side when the opponent is on the ball and improving his decision-making as the season has gone on.

Whereas he was at times infuriating to watch earlier in the campaign, when he would take on a fifth defender after going past four instead of passing to a team-mate in an excellent position, he has become much more effective in recent weeks.

That learning aptitude is perhaps the biggest reason why he has developed into a regular starter for Thomas Tuchel earlier than many expected.

More than anything, though, Dembele is incredibly fun to watch. His loose hips, effortless acceleration and creative thinking make him a devastating dribbler who provides highlight-reel fodder in almost every match, as the video below shows:

Looking ahead to a potential Ballon d'Or campaign in the future, his spectacular playing style should serve Dembele well with voters who naturally will remember highlights better than understated efficiency. After all, there is a reason attacking players have won it every year since Italian centre-back Fabio Cannavaro bagged the 2006 Ballon d'Or.

Dembele has all the tools to fill a potential post-Messi-and-Ronaldo vacuum.

In this year's Top 10, only Leicester's Riyad Mahrez, Barcelona's Neymar and Atletico Madrid's Antoine Griezmann are younger than 26. Assuming Messi and Ronaldo hold the fort for another three or four years, it stands to reason a player just starting his international career will be entering his prime when the award is up for grabs.

With that, Dembele has all the time in the world to become more consistent in his performances. Lest one forgets, the France international was only 10 years old the last time someone other than Messi and Ronaldo won the Ballon d'Or.

It would not be overly shocking to see Dembele don Los Blancos' jersey before too long.Martin Meissner/Associated Press

Of course, it is highly unlikely he can win the award while playing for Dortmund. The Black and Yellows will never be able to compete with Europe's elite for a sustained period of time; the financial gap between genuine superpowers and the Ruhr side will remain insurmountable.

Then again, it seems equally improbable Dembele will spend too many years at the Westfalenstadion. As a generational talent with superstar potential, Dortmund presumably are more stepping stone than final destination for Dembele.

While he signed a contract until 2021 in the summer, it seems inevitable he will move to one of European football's giant clubs before too long. Every big club will be after his signature whenever he is ready to leave Dortmund, who have showed before they are ready to cash in on players they have developed successfully.

Playing for, say, Real or Barca, who have provided the winners 12 times since the turn of the millennium, would leave the door to the Ballon d'Or wide open for Dembele, who has looked destined for greatness ever since debuting in Ligue 1 in November 2015.

Dortmund fans should consider themselves lucky they are along for the ride for the time being.