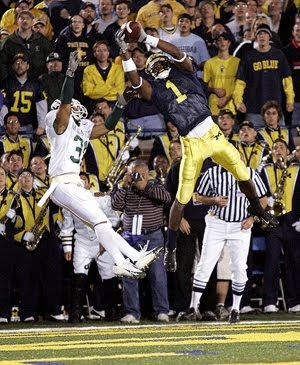 The Tale of Two Teams:
One team was ready for the BCS the other rebuilding after a 3-9 season.
One team had found the perfect coach, the other was still rebuilding with a ton of transfers, another freshman QB and a ridiculous Free Press article with allegations of over working his players.
One team was recruiting Michigan very well, while the other one was taking the top players from the state but recruiting the south heavy.
One team was ready to grab the reigns as the best team in the state, the other was going to have to give up it's title belt.
Funny how things change when it's time to lace them up and play football. Well, in the case of Denard Robinson it's "not lacing them up" and playing football.
The team that was supposed to have a big year is 1-3, the one that is still rebuilding is ranked 22 in the country and 4-0. Are these teams so different? The answer is no.
Both teams have the following:

So how do you call this one?

Sparty hasn't won back to back games in this series in 42 years. They have lost three in a row at Spartan Stadium to the Wolverines, but did win last year at the Big House.

The team that has the most yards running the ball usually wins this inter-state battle and Michigan has the number eighth ranked rushing attack in the nation.

This is the first road game for Tate and Denard and they have Iowa at Iowa next week.

One Team has it's back against the wall, the other is thinking New Year's Day Bowl.

You better go get your armour!

The keys for the game:

Have the Advil ready if:

I look for a wet track, a lot of points, trick plays, and one team standing at the end. I expect Michigan to block a punt and for Denard to be something special outside the QB position.

Michigan State is favored by three at home and can't drop four games in a row, can they? (When I started writing this post, I had MSU winning a close game like 42-38, now I have changed my mind.) Michigan is the better team and if they don't play tentative, (and play some defense) can win this game.

Tate doesn't get nervous so why should any of us? Michigan needs to go one and one on this road trip and this is the best place for a win.

OBJ Posts on His Comeback 🙏

'I couldn't tell u why this happened...just takin some ME time, some time to heal. Thank u all for the Luv'

OBJ Posts on His Comeback 🙏