Need a break from the 2016 NBA playoffs?

Let's talk about the NBA draft.

After all, June 23 is creeping closer and closer. Before long, the NBA will crown a champion, and some college (or international) star will be shaking NBA Commissioner Adam Silver's hand as the No. 1 pick.

Plus, keep in mind the lottery will take place May 17—which is nearly two weeks away.

Below is what you need to know before then.

After watching what Oklahoma's Buddy Hield did in the NCAA tournament, how could he not go in the top five?

Think of the teams that are drafting there—they need stability. Potential is great, but how many swings and misses can the likes of the Phoenix Suns afford? Sure, the 22-year-old senior is older than most projected lottery picks, but that can also be a plus.

He's more mature. He knows how to carry a team. He's a winner.

As of Sunday, DraftExpress had Hield going seventh overall to the Denver Nuggets, but NBADraft.net had him going at No. 3 to the Boston Celtics.

While the Philadelphia 76ers are likely to land either the No. 1 or No. 2 pick and take Duke's Brandon Ingram or LSU's Ben Simmons, Tom Moore of Calkins Media touched on an interesting point:

Not that high. Simmons or Ingram. RT @Tombo808080: @tmoore76ers Tom: would u pick Buddy Hield if the Sixers wind up with 2nd pick in draft?

Hield is a marksman, so a playoff team such as Boston could immediately plug him in and use his strengths while the rest of his game grows.

The postseason won't intimidate him: 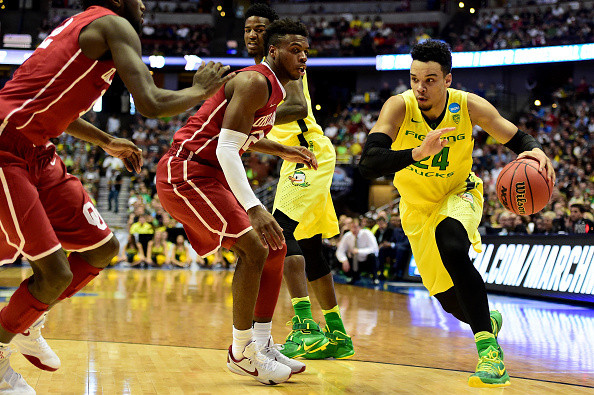 This kid did all he could to launch up the boards, so expect to hear his name not long after the calling of Ingram and Simmons.

The Lakers will land Ben Simmons

Ingram has surpassed Simmons as the top pick in many mock drafts, but if the Los Angeles Lakers strike gold in the lottery, that won't matter.

"We're real close friends," Russell told Bleacher Report's Kevin Ding. "[When we talk] it's obvious: 'Oh, man, I hope you come here.' It's obvious. But we talk about a lot of other things."

Their chemistry would be instant. Plus, Simmons would be significantly more engaged than when he was down in Louisiana, where he often came across as disinterested at times.

There are few stages in the world that can match Los Angeles.

"He's going to be happy and appreciative of anywhere he goes," Liam Simmons, Ben's older brother, told Mark Medina of the Los Angeles Daily News. "The Lakers franchise is a juggernaut. Along with that comes the responsibility of carrying the franchise's name and the legends before him. I think he'll enjoy that."

Per ESPN.com, the Lakers have a 19.9 percent chance of winning the lottery. Their pick is top-three protected, which means it will go to the 76ers if the pingpong balls are unkind to the Lakers.

Should luck be on Los Angeles' side, don't be surprised if the franchise passes on Ingram and takes Russell's buddy.