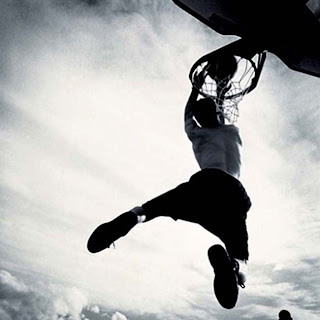 1) No stupid park effects. Picking the right players for your starting lineup is difficult enough without worrying about rain or snow in football, or some wind or bandbox killing your pitchers in baseball. Basketball, it's the same everywhere. Just like they say in "Hoosiers."

2) Everybody can do everything. Need a save? You better have the single guy on the pitching staff that's getting them. Didn't get #1 WOs? You're boned.

But the NBA offers a million ways to get to a win. There are guards that block shots. Centers shoot three-pointers. Power forwards get assists.

It's very liberating, and a lot of fun. When your point guard blocks a shot, you geek hard, kind of like when a catcher steals a base, or your RB throws a TD.

3) It rewards knowledge of the league. In baseball and football, the won-loss record of the team doesn't matter very much for the value of any particular player. Sure, maybe a RB from a bad team gets pinched a little as his team throws a ton in catch-up situations.

A QB from a team that gets a lot of leads might sit out some fourth quarters, or your starting pitcher might not win as many games. But for the most part, you can pretty much draft players and forget about the overall records of the teams.

In the NBA, knowing which teams are going to suck matters, because those are the ones where the star players are much more likely to "get hurt" and ease off on the minutes when their teams are eliminated in March and April.

You also have to ease off the guys from the very best teams, since they wind up losing minutes, and minutes drive everything. Lose enough games, and a lineup shuffle will happen. If you don't watch wins and losses, it costs you in the long run.

4) Overtime. In baseball, extra innings mean extra at bats from offensive players that never do enough with them. In football, overtime almost never happens, and even when they do, the extra numbers never add up to much.

But in the NBA, overtime—and even double and triple overtime—happens just enough to occasionally give you a Big Stiffie of oversized numerical goodness. Fantasy sports goodness is all about the outliers, and when your point guard pulls off 20+ assists in a double-overtime barn-burner, you're loving life. A lot.

5) It's niche-y. Fantasy football has become the old Yogi Berra joke—it's so popular, no one goes there anymore. Every ticker tells you the stats you need, you can talk about your team with people in the office who just auto-drafted for fun, and they are kicking your ass. It's maddening.

With pro hoop, it's still kind of underground, and just a lot more fun. Trust me on this. Fantasy sports fist pumps are best served in private.

6) It totally saves the winter. January and February is pure misery for fantasy players, unless you do a basketball or hockey league. If you are the kind of fantasy football player that mopes his way through December onward because you've got no more juice in the games, the Association will save you.

I will either run a live auction (preferred) or a serpentine draft. Either way, it will be a roto league. There's a dorky trophy involved, and if we do an auction, a big board, a room full of guys ragging on each other, and all of the pure fun that is a live draft.

The draft will be at my place in Central New Jersey (about halfway between New York and Philly, and close to trains), and if you aren't local, it's no problem; we'll be doing a conference call and web meeting to keep you involved.

Anyway, I need to fill the league the last slots. If you're interested, email me at dmtshooter@gmail.com. If you know anyone who's an NBA fan and can forward this along, I'd also appreciate it. If you can link this post and spread the word about the openings, that's also a big help. They'll be glad you did.

http://fivetooltool.blogspot.com - The Sports Blog That Loves You Back!