If you like what you read here, check out my blog Ballin' is a Habit.

Buzz Williams' Marquette squad suffered another setback on Friday as freshman point guard Junior Cadougan ruptured his achilles' tendon in a conditioning drill and will be out for the season.

With the Golden Eagles' losing their entire back court to graduation, Cadougan, a top 100 recruit, was expected to at least contribute significant minutes, if not start. With JuCo transfer Darius Johnson-Odom currently sidelined with a sprained ligament in his foot, Marquette's back court depth is severely depleted. 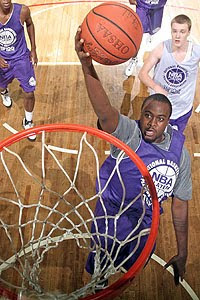 Junior Cadougan could miss the season with an Achilles injury.
(photo credit: ESPN)

How important is Mo Acker's decision to return to school now? Seniors Acker, who had originally decided to focus on his studies during his last year at Marquette, and David Cubillan will now be expected to handle the majority of the back court minutes, with junior Dwight Buycks coming off the bench.

Down in Morgantown, Mountaineer fans got some great news today as sophomore Truck Bryant has been reinstated by head coach Bob Huggins. Back in July, Bryant was arrested for leaving the scene of an accident after crashing into a car driven by a fellow WVU student.

In early September, he pleaded no contest to the charges, racking up some court fees and fines, but avoided jail time. 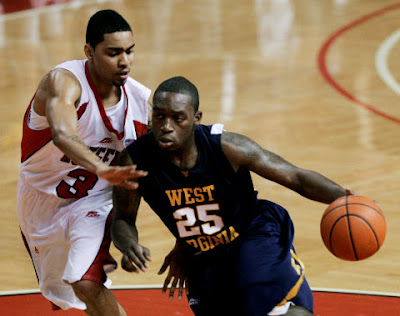 This news comes three weeks after fellow point Joe Mazzulla, who missed most of last season with a shoulder injury, was also reinstated.

West Virginia sorely needed these two point guards. Last year, the Mountaineers were as good as anyone in the conference in terms of toughness, defense, and hitting the glass (especially on the offensive end). But they struggled offensively at times. Outside of Da'Sean Butler and Alex Ruoff, they did not really have a player that could create offensively.

With Ruoff gone, the 'Neers needed options on the offensive end. Both Mazzulla and Bryant are both solid playmakers - Bryant is probably a better scorer, but Mazzulla is more of a true point guard—and should be effective playing alongside each other.

With these two on the roster, expect the Mountaineers to compete for the Big East title with Villanova.

2021 prospects being overlooked by various media and scouts