Be sure to check out all my work here

Utah went undefeated last year and still got left out of the national championship game. This is obviously because they are not a big name team from a big name conference. Utah fans certainly have reason to be angry.

Utah has a lot of work to do to get back to where they were last year. They lost their QB, and top wide outs. And they still don't know who is going to start at QB this season, although Jordan Wynn is the lead man right now.

The defense is looking better as they return eight starters.

Let's take a look at who needs to step up on offense, and who is back on defense:

Like I said, it looks like Jordan Wynn will be leading the offense this year. He is a true freshman and will need to at least control the offense. If he, or whoever is QB, can limit mistakes, the defense is good enough to take over.

Matt Asiata will be a welcomed returnee for the Utes at RB. He ran for 707 yards and found the endzone 12 times. He will be the key to the Utes' offense. If he can be effective, it will help the QB and WR's. Look for Asiata to get his fair share of touches as Utah looks to establish an offense. 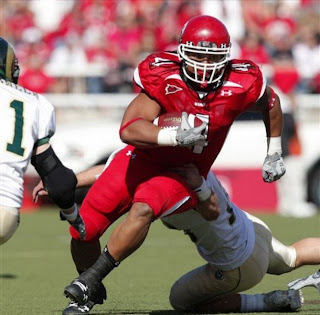 Asiata will be crucial for the Utes
(credit daylife.com)

The defense has key players in the middle and back in the secondary.

Starting with the LB's, Stevenson Sylvester and Mike Wright are back for Utah. These guys will have to step up to the plate and continue to lead the defense this season. Sylvester was a second-team all-conference player last season and won the team top LB award. It will be crucial that he does that again.

Wright was the squads' leading tackler and has great communication skills. Between him and Sylvester, Utah has two great players to lead this team.

Gotta give props for this...