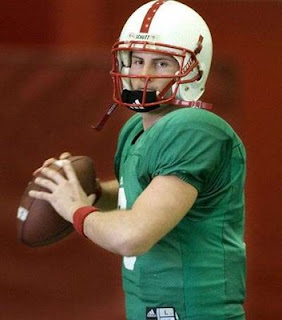 Patrick Witt: Do they grow corn in New Haven?


It looks pretty official that University of Nebraska transfer Patrick Witt will be playing for the Elis at quarterback this fall.

This is a potential game-changer for Yale, which looked like it was going to face some serious problems in 2009.

If Witt turns out to be an All-Ivy caliber player, I think Yale can make a run at the first division, but I STILL don't think the Bulldogs would be championship material. The losses throughout the defense and on the offensive line are too serious in New Haven.

Yale and Harvard tend to try to copy and one-up each other, so I wonder if this news will somehow push the Crimson's efforts to get Andrew Hatch into the lineup somehow. We'll keep watching.

All this transfer news has me thinking about how big news can sometimes have the totally opposite effect than what you'd expect.

In this case, I think a lot of you were as fooled as I was when the NBA started allowing college basketball players to enter the draft en masse about 15 years ago.

I thought the growing number of NCAA tournament teams with no seniors would lead to more March Madness wins for the more-experienced Ivy teams in the draw. What we lacked in super talent, we'd make up for in experience as no Ivy players would be coming out early.

But the result has been kind of the opposite. Faced with the certainty that 2-3 players will leave school early every year, top-level college basketball coaches are stockpiling every recruiting class more than ever before. There are no more stars slipping through the cracks these days.

The situation in football, where fewer players come out early, is also counterintuitive. You'd think the rarer cases of players leaving would lead to less stockpiling, but the opposite has happened. BCS college coaches are hoarding talented players, especially at running back and on the defensive line. The recent dearth of 1,000-yard rushers in the Ivies is directly attributable to this.

But maybe the worm is about to turn once again, and this time in our favor. Maybe, just maybe, some of these "stockpiled" players will begin to realize that they are simply emergency backups at the big schools and could do a lot better for themselves before and after graduation by playing for an Ivy school.

It may be time, or past time, for every Ivy school to aggressively go after transfers with even a hint of the academic credentials they'll need to get admitted.

Perhaps this is happening already, but I'd like to see it happen more. Talented athletes who have the smarts and the grades shouldn't ride the pine in favor of other kids who are just using college as a stepping stone to the pros.