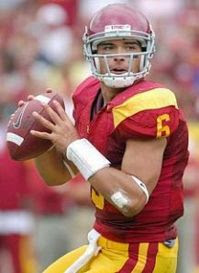 This is not our new quarterback for 2009

OK, OK, USC star quarterback and New York Jet first pick Mark Sanchez was on the CU campus yesterday for a little workout for the news cameras. He was not here to transfer to Columbia. (But he does have another year of eligibility, no?).

Sanchez shouldn't be too uncomfortable on Ivy campuses, his brother was a Yale quarterback and now serves as his agent. I wonder if visiting Columbia was his brother's idea?


Scouting the Enemy, Part 1 of Many

The summary of Fordham's annual spring game offers a few hints of what Columbia should expect to see when the teams square off in 144 days. It looks like we'll see more of the same—a lot of quarterback John Skelton throwing short passes, and even more of Xavier Martin running the ball as fast as he can.

This figures to be an interesting year for the Rams as they reportedly are moving to a scholarship program for football beginning in 2010. That means all the non-seniors may be auditioning to keep their jobs all season long as they feel the cold stares of scholarship high school stars creeping up on them.

Fordham remains a very hard team to figure out. They stumbled out of the gate in 2006 under new head coach Tom Masella, turned into a power in their 2007 Patriot League championship season, and then fell apart in 2008 with the same players and without major injury issues.

Will the real Fordham Rams please stand up?

Perhaps former Fordham offensive coordinator and current Columbia offensive line coach Ed Argast will help the Lions figure the Rams out on the field where it counts on the field on Sept. 19.

St. Francis Prep was the first school to report cases of the flu, as it appears some of the students went on a spring break trip to Cancun.

It occurs to me that we are very fortunate that this outbreak is not taking place during football or basketball seasons. If so, some games could have been canceled, especially if there were any cases reported at Columbia or on any of the campuses where the Lions play.

With the hot summer months coming up, my medical sources tell me the chances this virus survives through June are minimal. We should be worrying about something else by the time September rolls around.