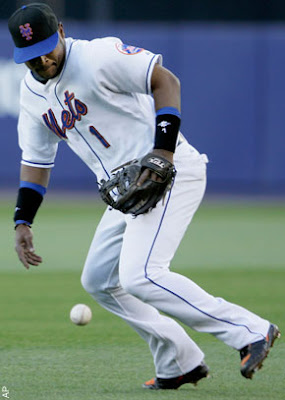 Sure, the Mets can't hit in scoring position to save their lives, but wow, these guys can hit .300!

I know it's only 13 games into the season, but this is still very, very impressive. And somewhat weird.

When you consider that each of the seven guys hitting over .300 has at least 40 at bats, this feat seems somewhat astonishing.

(Note: Has this ever happened before? Seven starters, all hitting above .300 this "late" into the season). *It seems as though the odds would be astronomical.*

What's not impressive is the Mets record: 6-7. It's incredible to think that this team has not gotten off to a better start considering how hot their bats are.

In the end, hitting .300 doesn't matter when the team doesn't win. The Mets have to perform better with runners in scoring position if they are going to make a serious push in the NL East.

NYY GM says team won't overreact to the rough start, but 'It's 15 games [he'd] like to forget'