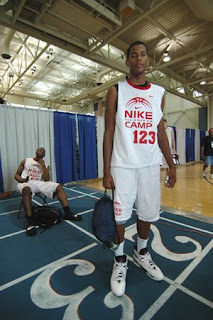 In an interesting bit of news coming out of the New York Times, high school junior Jeremy Tyler, the 6'11" basketball stud is electing to forgo his senior year of high school to move overseas to Europe and take up a professional career. Tyler's move would make him the first United States born high school player ever to leave school early for the pros.

"Nowadays people look to college for more off-the-court stuff versus being in the gym and getting better," Tyler told the newspaper. "If you're really focused on getting better, you go play pro somewhere. Pro guys will get you way better than playing against college guys."

Tyler is currently 17 years old and he has verbal commitment to play for Rick Pitino and Louisville. One can expect the Cardinals wanted Tyler to be a major part of their program in the near future.

Jeremy Tyler, considered one of the top big men in the Class of 2010, will follow in the path of Brandon Jennings, who opted to play in Italy this past season. After passing on his commitment to Arizona. It has yet to be seen if Jennings' move will pan out with success in the NBA.

The real kicker to all of this is Tyler has yet to finish his junior year of high school at this point, and for all intents and purposes, he has simply dropped out of high school right now.

"You know what? It's just a job," Jeremy's father, James, was quoted by The New York Times, "He gets a chance to work the job of his dreams and have fun doing it. There's kids leaving to go to Iraq at age 18. They took a job to serve their country. He's going to play ball."

Jeremy's father has since denied making such a statement, saying someone else must have made that comment.

Granted, I think this entire situation is, frankly, disastrous because I always support a kid getting an education, especially a high school education. But his last statement of being tired of being triple-teamed also concerns me from a competitive standpoint.

If you are a great player you expect to get double and triple-teamed and you should thrive under that pressure. No one heard Jordan or LeBron or Kobe complain about the triple-teams. They see them as challenges and do whatever they can to step up and beat them.

Jeremy Tyler is an over sized boy who is now going into the jungle that is international professional basketball. The chances of him coming out on the other side unscathed are slim and few. And that is a shame because the kid is good and he can play. But he is setting himself up for failure.

The NBA needs to institute a two year minimum rule to get kids into college with no exception. No work around's no trips to Europe. If David Stern cares about the players and the game like he claims, he would make that a priority on his to-do list.