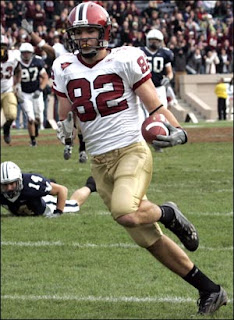 They don't get much better than wide receiver Matt Luft


Any Ivy champ facing the graduation losses of a Bushnell Cup winning quarterback, three first-team and second-team All-Ivy defensive linemen, and three of the league's top offensive linemen would have a tough time making its case for repeating as champs.

Except for maybe the 2009 Harvard Crimson.

The Harvard football recruiting factory created by head coach Tim Murphy is hardly finding the cupboard bare for this coming season. But truth be told, this is looking very much like the weakest Crimson team we've seen in six or seven years.


1) Who's going to play quarterback?

Chris Pizzotti is looking at his chances in the NFL right about now—so that's the big question in Cambridge as the Ivy football world awaits any news on re-transfer Andrew Hatch, who left Harvard for LSU and now is back on campus.

The status of his playing eligibility appears to be a closely held secret. (I know I'm not the only guy who goes onto the Harvard roster Web page daily looking for Hatch's name).

While I don't think Hatch is an all-world passing quarterback, if he does join the team he will make the Crimson a definite title contender as he would eliminate any disadvantages Harvard will face by having to start a totally new quarterback.

It would be totally unwise to think that the quarterbacks currently on the Crimson roster aren't going to be ready to play, but we do know that none of them saw any varsity action at all in 2008.


2) Who are the best returning players?

Quarterback aside, there is some real strong offensive firepower returning to Harvard Stadium. First-team All-Ivy Matt Luft was arguably the best wide receiver in the Ivies last year and he returns.

Fellow WR Adam Chrisis wasn't one of the league honorees, but the rising sophomore sure did a number on Columbia last season and he impressed me. Rising junior Chris Lorditch, who grabbed a 76-yard toucdown pass against the Lions, is also back in the fold. So, the core of the wide receiver corps is basically all returning to help Mr. New QB get settled.

Three of the five starting 2008 offensive linemen, including first-team All-Ivy James Williams and second-team All-Ivy Alex Spisak are returning. Tight end Jason Miller is gone, but he's replaced by rising junior Nicolai Schwarzkopf, who was the No. 1-rated Ivy recruit in 2007.

The running game in Cambridge hasn't exactly been stellar since Clifton Dawson graduated after the 2006 season, but it didn't need to be with Pizzotti throwing like a Hall of Famer. Nevertheless, experience and hard-working veterans Cheung Ho and Gino Gordon, (Gordon made second-team All-Ivy), are back at the running back positions.

On defense there is more attrition, primarily on the stellar defensive line that has been som dominant for what seems like seven or eight years now. Matt Curtis, Peter Ajayi, and Desmond Bryant have graduated. But 2009 team captain Carl Ehrlich is back and I don't expect the front four to be a huge weakness for Harvard in 2009, just not dominant.

The majority of the starting secondary returns, including 2008 Ivy Rookie of the Year Matthew Hanson. But the big star, at least as far as media attention, Adam Berry is graduating.

Definitely. A lot depends on the quarterback, and as usual, we'll probably learn all we need to know about the Crimson from their week two game against Brown. Harvard lost the game against the Bears by a mere two points in Providence in 2008 and that cost them sole possession of the Ivy title in the end.

Both the Brown game and the matchup against Penn this year will be at Harvard Stadium, giving the Crimson a distinct advantage against the other two teams that look like real contenders at this point of the spring.

But I can't help noticing that Harvard was truly not as strong in 2008 as they were in 2007. And it's hard to argue that the 2009 team will really be better than last year's squad. There's a good argument to be made that the Crimson may fall back into the middle of the pack for just a year or two beginning now.

NFL informs Tennessee it may receive a fine for COVID-19 violations, but no forfeit of draft picks (Schefter)