Jamie Varner retained his WEC Lightweight title in a controversial split decision and Urijah Faber moved a step closer to a rematch for the Featherweight title at World Extreme Cagefighting 38 Sunday in San Diego, CA.

Varner couldn't continue midway through the fifth round of his match with Donald Cerrone after Cerrone connected with a knee while Varner was on the ground. The fight (entertaining to that point), was tilted in favor of Varner, but Cerrone's conditioning gave him a chance in the final frame.

The judges gave two rounds to Varner and one to Cerrone for a split decision, yet another WEC match that ended in a strange fashion.

Urijah Faber made quick work in defeating Jens Pulver in their little-hyped rematch with an easy first-round submission victory and has his eyes set on the winner of March's Mike Brown/Leonard Garcia Featherweight title match.

Here are your detailed as-they-happened results from World Extreme Cagefighting 38, courtesy of Ropes, Ring and Cage:

Aldo looked good early, hitting a reverse spinning kick. He seemed much more relaxed. Perez was holding his own, but as he went in for a low jab, Aldo hit a knee that knocked Perez on the mat. Aldo ended it with a few unanswered punches and the fight was called at the 4:15 mark. Aldo immediately ran out from the cage and into the crowd to celebrate. Great character and he could be looking at a featherweight title shot in 2009.

Campbell hit a big slam early on with plenty of build before the blow to get the crowd into it. He wanted to keep it standing, while Villefort wanted to get it to the ground. Villefort was looking for any type of submission he could (heel hooks, triangles, kimuras). Eventually, he got on Campbell's back and flattened him, throwing punches to the point Campbell wasn't defending and the fight was stopped at 3:53 in the first round. Entertaining fight with a lackluster ending. Crowd didn't like the decision and let Villefort hear it.

This was a quick bantamweight bout that Jorgenson won by locking on a guillotine from top position that Gomez couldn't escape from. The fight ended just 1:09 into the first round. 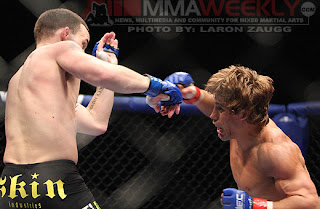 This one was over quick. Pulver was aggressive early in forcing the action, but Faber connected with a left hook body shot that made him wince. Faber pounced and grounded Pulver within seconds, corralling him in a top guillotine choke that ended the fight at the 1:34 mark. This was convincing enough that Pulver has earned a shot at Mike Brown if he can successfully defend his gold against Leonard Garcia in March.

Pulver wanted this fight in March, so he's got an excuse if he wants it. Post-fight, play-by-play guy Craig Hummer asked Pulver if he was still relevant in the division after losing three straight fights. Pulver began to tear up and said he was asking that same question himself. He said he's going to keep going, but they panned to a grinning and applauding Faber that made the situation seem sad as if he was taking pity on him. I hope Pulver goes out the right way and doesn't become an "Aw, shucks" fighter that people don't take seriously. He certainly is a major face, but he definitely needs a win and soon.

This is the first televised fight that actually went more than one round. Varner got Cerrone down and was unloading downward punches, raising a huge egg on his forehead. Cerrone was going for submissions out of the rubber guard but Varner had no problem with getting punches through. Cerrone did get up at the end of the round and was swinging, which the crowd got into.

Varner opened up a cut over Cerrone's left eye in the third round and he was bleeding around both eyes and giving him problems, especially as he was heavily squinting in the fourth round. Cerrone was willing to stand up, but Varner had the advantage everytime it went to the ground. Cerrone has terrific conditioning as he kept pressing while Varner was looking gassed.

With 3:12 to go in the fifth round and with both men getting up from the ground, Cerrone threw a knee that grazed Varner in the right temple. Varner was claiming he couldn't see and the fight was stopped on an unintentional foul, meaning the judges' scorecards would decide. Varner was nearly in tears and apologetic for having to stop. Two judges scored the bout 49-46 for Varner, while one had it 48-47 for Cerrone. While the knee didn't connect square, Varner was having issues even putting a sweatshirt on post-fight.

The fans booed Varner and of course, both men said they want to do it again ...something the fans that paid money to see the fight Sunday couldn't have cared less about. Craig Hummer was awkward in trying to somehow spin this situation in his post-fight interviews.

- Hummer took over as play-by-play guy with Frank Mir. Not sure if this is permanent, but he did a decent job. Mir seemed distant at times, almost like his mind was focused on a 265-pound UFC Heavyweight Champion or something.

- The censors must have been stuck in Canada for the NHL All-Star Game as there were several unedited F-bombs in the post-fight interviews.

- Miguel Torres vs. Yoshihiro Maeda was named WEC's 2008 Fight of the Year.

- Next event is March 1st on Versus.

(Thanks to MMAWeekly.com for the photos)

Josh Nason - josh [at] ropesringandcage [dot com] - has published MMA, wrestling and boxing blog Ropes, Ring and Cage.com since 2007. If you are using any content or recapping from this site, please include a link to www.ropesringandcage.com. Thank you for your support!