Speed TV's show NASCAR Now spent a great deal of time in the wake of Dan Wheldon's tragic crash in Las Vegas analyzing the relative safety of racing. The four analysts came to the basic conclusion that it will never be completely safe.

One of the analysts, former NASCAR driver Ricky Craven, shared a quote that he had heard in the past:

"Boxing and racing are the only true sports because the threat of fatality exists. Everything else is just a game."

That may be a slightly biased stance, but the entire sporting world was reminded of the prevalent dangers that can leap upon a driver, any driver, at a moment's notice.

NASCAR is far safer than IndyCar, but only in a relative context. Both are extremely dangerous in their own right.

Perhaps the gravest danger posed to an IndyCar driver is the open cockpit. The head, even when helmeted, is exposed to greater force during a collision or flip.  NASCAR drivers are afforded the safety of a top, supported by a roll cage, which prevents exposure of the head to increased blunt force trauma.

Indy cars are also much lighter. Current specifications mandate they weigh 1525 pounds, not including driver and fuel.

NASCAR rides can weigh 3200 pounds and up to 3400 pounds, including fuel and driver. It takes longer for them to get to top speed and, even when this occurs, there is more mass to absorb the collision. 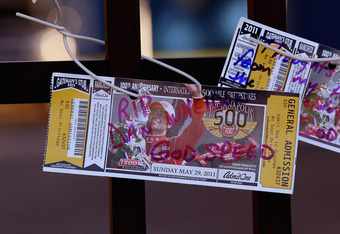 Indy cars travel at a much higher rate of speed. At this year's first race in Talladega, one of the fastest and most dangerous tracks in all of NASCAR, the average speed was 156 miles per hour. Granted, the drivers traveled much faster at certain points, but that was the overall average.

Vehicles on the IndyCar circuit routinely travel in excess of 200 miles per hour at oval speedways such as Las Vegas. Estimates are that Dan Wheldon was traveling around 220-225 miles per hour when the tragic accident occurred.

His reaction time was diminished by about 75 miles per hour of the average speed of NASCAR drivers at its most dangerous track. The damage caused was increased by the same ratio. Bottom line: decreased reaction time plus increased speed equals grave hazard.

Recently built oval tracks were designed for stock cars. When NASCAR drivers travel to a road course two times per year, their performances decrease. They have to go slower, otherwise face completely spinning off of the road. When IndyCars go to ovals, their performance increases with the steeper banks. They go faster and have a much smaller margin for error, especially when racing in a pack.

Although IndyCar was the first division to implement the SAFER (Steel and Foam Energy Reduction Barrier) as a safety measure for wall collisions, that does not truly protect a driver when he/she gets airborne. IndyCars seem much more aerodynamic than their NASCAR counterparts and get off of the ground much easier than Sprint Cup stock cars.

Racing is an extremely dangerous passion and profession. Death and serious bodily harm will never be fully eradicated. However, the current NASCAR model is much, much safer to the driver than is stepping into the open cockpit of an Indy car.