Less than two weeks after seeing significant playing time against the Bills and Broncos, right guard Evan Mathis has been released from the team. Taking his place will be guard Matt McChesney, who was elevated from the practice squad.

An All-SEC performer at Alabama, Mathis was drafted by the Panthers in the third round of the 2005 NFL Draft. After playing only in a reserve role as a rookie, Mathis started 15 games for the Panthers in 2006.

Mathis failed to hold onto the starting job beyond that season and was relegated to a backup role in 2007. He was released by the Panthers during final cuts in 2008.

Mathis was signed by the Dolphins on Sept. 9th after rookie Donald Thomas, who had earned the starting right guard spot in the preseason, was knocked out for the season with foot injury. Recently, Mathis had been sharing time at right guard with Ike Ndukwe.

Originally a defensive tackle, McChesney played college football at Colorado and was signed by the St. Louis Rams as an undrafted free agent in 2005.

After being released by the Rams in July, McChesney was signed to the practice squad of the New York Jets mid-season. He was signed to the active roster late in the season and appeared in three games, recording three tackles.

In 2006, McChesney was moved to the offensive line and spent the entire season honing his new craft on the practice squad.

The following offseason, McChesney was an All-NFL Europa performer for the Frankfurt Galaxy. He spent the entire NFL season on the Reserve/NFL Europa Non-Football Injury list.

After being re-signed in the 2008 offseason, McChesney was released by the Jets during final cuts. He began the season on the practice squad before being release on Sept. 15. He was signed to the Dolphins' practice squad on Sept. 24 when the team released tight end Drew Atchison.

McChesney will wear No. 60, which was worn by undrafted rookie Mike Byrne (my boy) in training camp.

Despite being a former third-round pick, Mathis has failed to hold onto starting opportunities with two different franchises over the past three seasons. He was unimpressive in his time in Miami and was unable to beat out a journeyman in Ike Ndukwe, leading one to believe Mathis is likely bound for a career as a backup.

As for the Dolphins, the right guard position has been a season-long question to which the Dolphins don't have the answer. Rookie phenom Donald Thomas was supposed to run away with the job, but an unfortunate injury in the season opener and a lack of depth on the offensive line has haunted the team.

With the exception of the two first Wildcat appearances (New England and San Diego), the Dolphins' running backs have been unable to find consistent room with which to work. Their struggles are due in large part to the talent hole at right guard.

As the Dolphins push for the playoffs in a tight AFC East race, the team is trying all sorts of options at right guard this season. Ndukwe held the role at first, then Mathis was given a shot. Next up might be Andy Alleman—a third-rounder by the Saints in 2007 who hasn't seen much action this season. Beyond that could be McChesney, and eventually recent-signing Brandon Frye after he learns the offense a little better.

None of these players can be counted on as saviors, even the former high draft picks like Mathis and Alleman. However, If I had to pick a few with the best potential, I would probably go with Alleman and Frye. Alleman has versatility along the interior line while Frye has a lot of tackle experience, though obviously neither has earned a significant NFL role to date.

One thing is for sure: if the Dolphins don't patch up this hole on the line and get some kind of productive running game going, a playoff push is going to be difficult and a run in the playoffs might be near-impossible.

One more thing: the mere fact that Shawn Murphy's name has not even been mentioned lately (or all season, as he hasn't yet even dressed for a game) does not bode well for the rookie fourth-rounder. He might stick around through next preseason as the front office might like to give him one more chance to prove himself, but right now I'd say he's a long shot to be with the team once the 2009 season roles around.

Chris Nelson is a journalism major at Georgia State University. He operates his own Miami Dolphins blog which can be found here.

Pros and Cons of Jets Trading for Odell Beckham Jr. 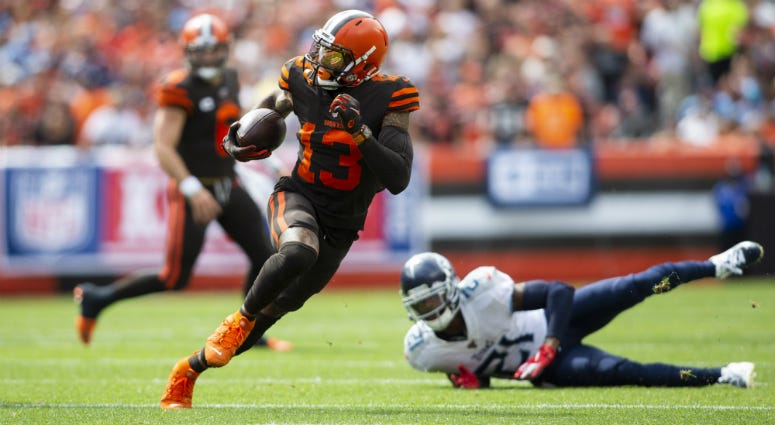 Pros and Cons of Jets Trading for Odell Beckham Jr.