John Daly and the 13 Worst Putters on the PGA Tour 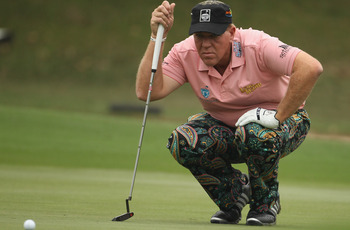 If there's one element of a golf game that is the biggest difference-maker, it's putting.

A golfer can be the best ball-striker, have an incredible short game and drive the ball a mile, but if they can't putt, they will struggle.

For how important putting is, though, there are plenty of big names on the PGA Tour who have been consistently bad putters.

One of those players is John Daly. If Daly has a trademark its his peculiar wardrobe, but for golf fans just as "in-your-face" is his terrible putting.

Here are the 13 worst putters in the PGA Tour. 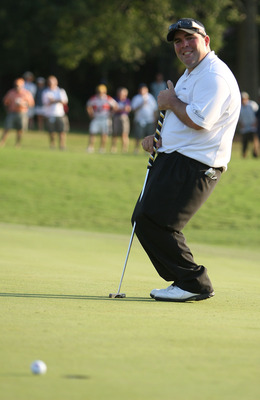 At 5'10" and 250 pounds, Kevin Stadler is anything but the prototypical golfer.

However, Stadler's size isn't the only thing that is out of the ordinary. He is ahead of the PGA Tour average in driving distance (289.8 yards), driving accuracy (61.48 percent) and greens in regulation (66.7 percent), but Stadler's continual downfall in his golfing career has been his putting.

One of the PGA Tour's fairly new statistical categories is "strokes gained-putting." In this category, Stadler ranks 171st, which is close to dead last.

In fact, since the PGA Tour began keeping this statistic in 2004, Stadler has a strokes gained-putting average of .350, which is good (or bad) enough for one of the 12 worst in this category. 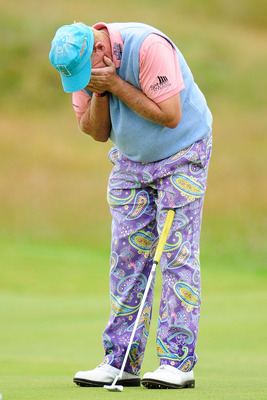 If putting has ruined any one golfer's career, it's ruined John Daly's.

Daly is one of the fan's favorite golfers on the PGA Tour, but his success has been limited because of his inability to putt consistently.

Daly ranks in the top 30 in driving distance, averaging over 296 yards per drive, and in greens in regulation from fairway bunkers at 59.7 percent.

Unfortunately for Daly, all those good statistics are overshadowed by his .463 strokes gained-putting average which ranks him 164th on the PGA Tour.

This year hasn't been out of the ordinary for Daly either. Daily's average since 2004 is .352. 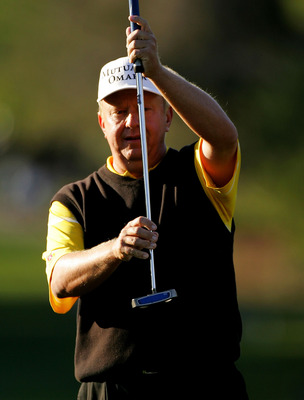 Another "Burly" golfer, Billy Mayfair has been a notoriously bad putter. As a result, no one seems to notice the positive aspects of his game.

As a member of the PGA Tour in 2011, Mayfair has donned the 175th ranked strokes gained from putting average at .762.

Mayfair is one of the most accurate drivers on the PGA Tour, ranking in the top 20 in driving accuracy at 67.12 percent, but as long as his putting continues to be abysmal, no one will notice. 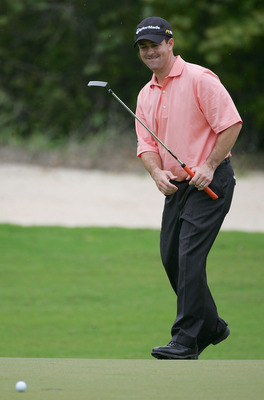 One of the longest hitting players on the PGA Tour, Charles Warren is known to bomb it off the tee. Thus far in the 2011 PGA Tour season, Warren is 11th in Driving Distance on the tour averaging just under 300 yards per drive.

He's not terrible in his iron play either and he actually ranks 9th among players on the PGA Tour from 150-175 yards, hitting the ball an average of 25 feet away from the pin. 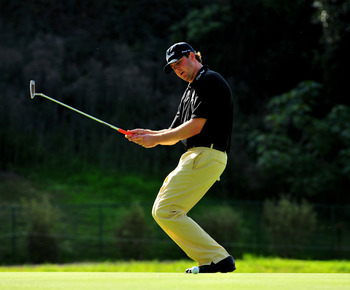 D.J. Trahan is one of the most miserable putters on the PGA Tour.

Trahan's top 30 ranking in driving distance (296 yards), top three ranking in greens in regulation from fairway bunkers (69.9 percent) and his top 10 ranking in holes per eagle (108) are the only things keeping him on the PGA Tour.

With a strokes gained-putting average of 1.082, which ranks 184th on the PGA Tour, Trahan negates any positive statistics that his game has to offer. 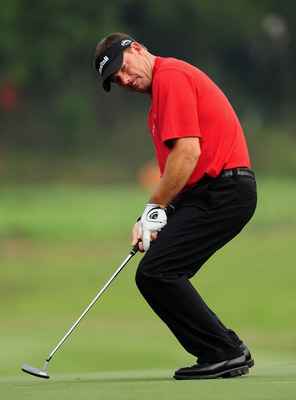 Alex Cejka is another solid golfer that has a career marred and characterized by bad putting.

Outside of his putting game, Cejka scores below the tour average (71.1) and is above the PGA Tour average in driving accuracy (67.29 percent), greens in regulation (66.36 percent) and in sand save percentage (53.4 percent).

This year, Cejka has played pretty well despite his putting finishing in the top 36 five times including two top 12 finishes. To think that Cejka may have had a chance to win some of those tournaments if he could put.

Instead, Cejka is lucky to be in the running in every event he plays in because of his .668 strokes gained-putting average this year and his .459 average since 2004. 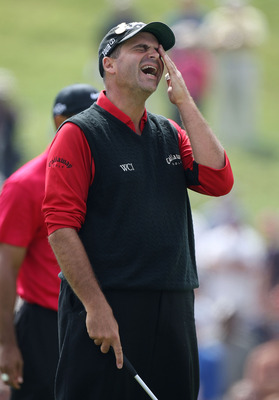 Rocco Mediate came out of nowhere in 2008 to push Tiger Woods to a playoff in the U.S. Open Championship. It was the highest finish Mediate had ever had in a major championship, and it may be the last chance he'll ever get if he continues to putt this terribly.

When Mediate's career is over, he will be know for two things: driving Accuracy and terrible putting. 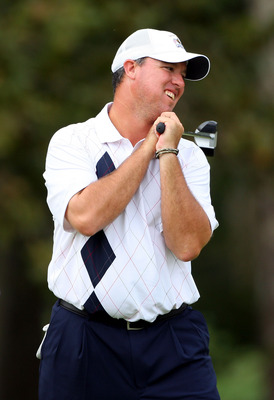 You would think that one of the most accurate strikers in all of golf would also have accurate putting—but not so with Boo Weekley.

Without these horrid putting numbers, Weekley's driving accuracy (63.18 percent) and Greens in Regulation average (71.32) percent would make him competitive in any event. 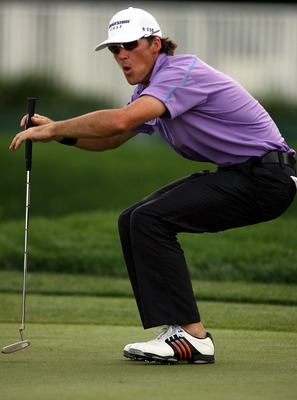 Most of the players on this list have redeeming qualities that allow them to remain competitive on the PGA Tour despite their terrible putting, but in Will Mackenzie's case, it's pretty much all bad.

Will Mackenzie probably belongs on the 13 worst players on the PGA Tour list as well. 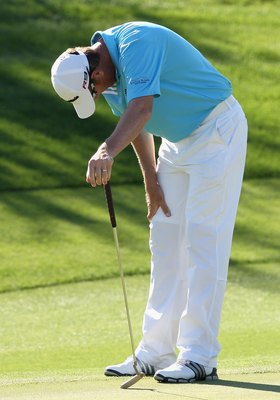 Unlike Mackenzie, there were plenty of bright spots in Greg Owen's game.

He was one of the longest players on the PGA Tour, hitting the ball over 305 yards per drive and unlike many of the long ball hitters, Owen was also accurate, hitting 65.45 percent of the fairways of the tee.

However, to say he has struggled with the putter would be an understatement.

Owen is one of four players since 2004 to average more than .500 strokes gained putting, and his inability to putt the ball has led to his switchover to the Nationwide Tour. 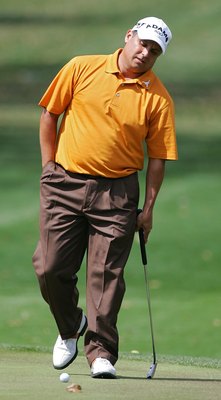 Omar Uresti is another player who's bad putting lead to his demise in the PGA Tour and caused his subsequent switch over to the Nationwide Tour.

When on the PGA Tour, Uresti was among the leaders in driving accuracy hitting over 71 percent of all fairways with the driver. Unfortunately, there weren't many other statistics that Uresti could be proud of.

In his career, Uresti averaged an appalling .583 strokes gained with the putter, which is good for second-worst since they started keeping track of the statistic. 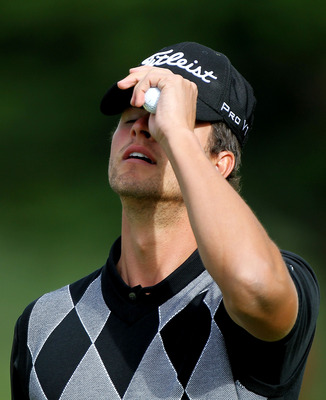 It seems odd that a player once ranked No. 3 in the world would be on this list, but Scott is deserving of a spot.

In 2008, Scott ranked dead last out of the 185 players on the PGA Tour, averaging over 31 putts per round, which was four strokes worse than the best putter on the tour.

Scott has cost himself countless PGA Tour wins because of his putting and may be costing himself a career.

This year on the PGA Tour, Scott averages .925 strokes gained-putting. 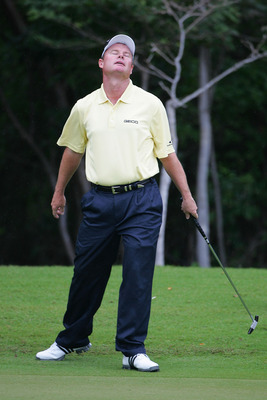 And the worst putter in the PGA Tour is...(drum roll) Joe Durant.

Few golfers have been worse with the putter over the last 10 years than Durant.

Since 2004, Durant has putted worse than any other player on the PGA Tour, averaging .644 strokes gained putting.

It really doesn't matter how well Durant plays in other areas because his putting has been so bad that he never has a legitimate chance to win.

Durant has only made three cuts so far this year despite putting the best he has ever putted, which just goes to show you that even Durant's best years putting aren't good enough.