Shaquille O'Neal Retires: The Most Ridiculous Quotes of His Career 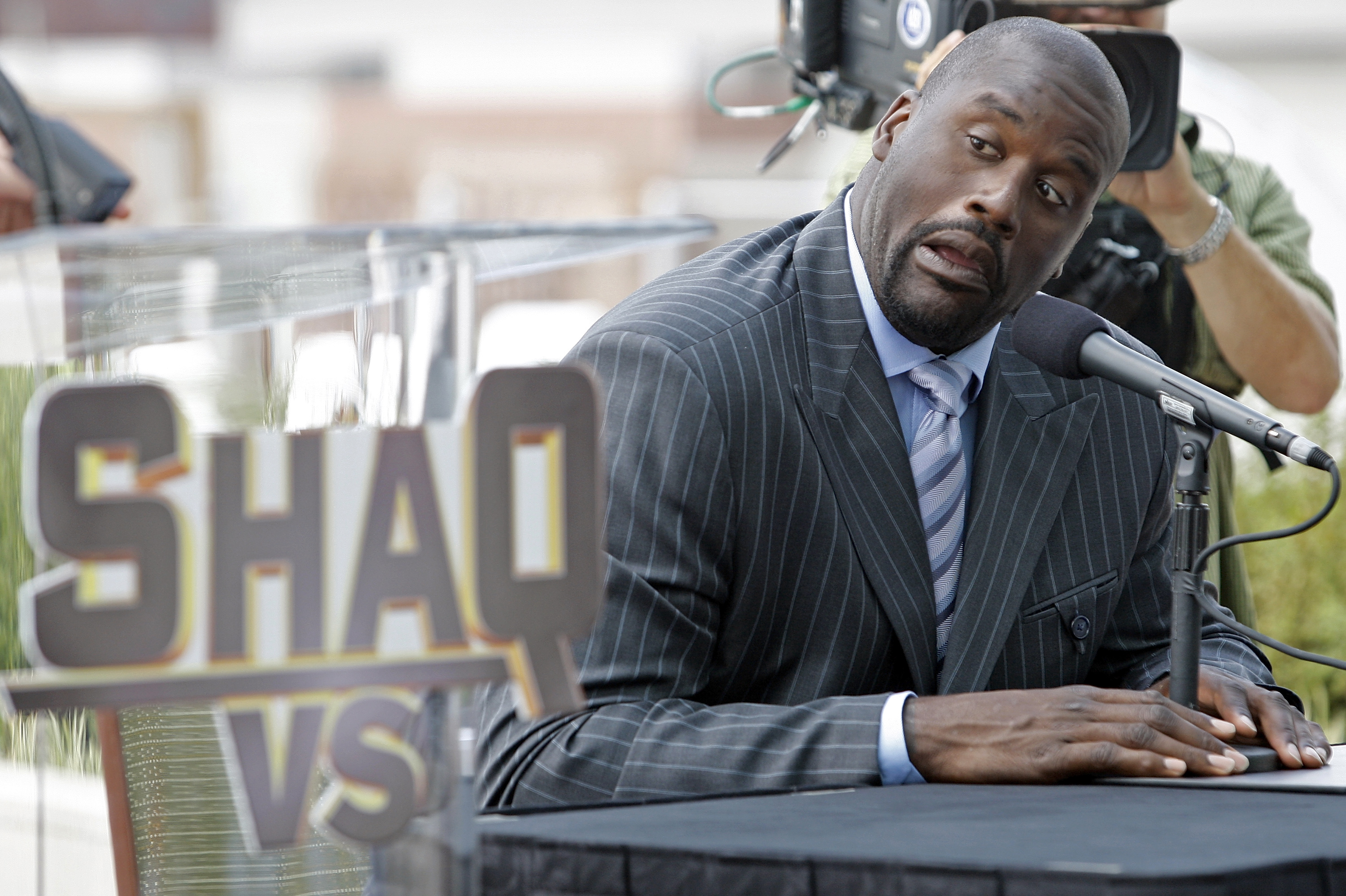 Shaquille O'Neal, one of the greatest centers in NBA history and four-time champion, has announced his retirement via Twitter.

Shaq leaves behind not only a statistical legacy, but a "quotatious" one, as well.  He is the Yogi Berra of the NBA.

I searched the web for the best Shaquille O'Neal quotes over the years and landed on shaqquotes.com, a site that covers them all.

Here's the cream of the crop. 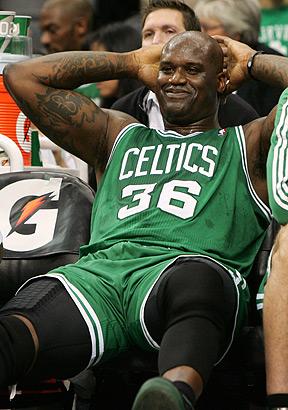 Few people can pull off self-aggrandization with such charm.

And it started early: After his high school team won the championship, he was asked what the victory was attributed to.  Shaq replied: "I attribute it to me."

He justified his poor performance at the foul line by attributing it to God's fairness, evening out the field for the rest of the basketball mortals: "So me shooting 40 percent at the foul line is just God’s way of saying that nobody’s perfect. If I shot 90 percent from the line, it just wouldn’t be right.”

How would Shaq defend against himself? “I wouldn’t.  I would just go home.  I’d fake an injury or something.”

When a reporter asked which four traits would Shaq combine to create the perfect basketball player, he replied: "Me. And all of my traits.”

Shaq's human interest segment might be rather brief.  Searching his memory for a humbling experience, he finally realized: “I’ve never had one.” 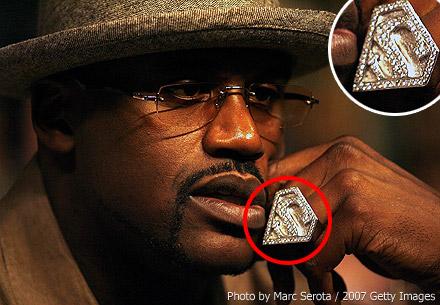 With regard to contract negotiations, Shaq held a draconian line: “I’m like tax. You’re going to pay one way or the other.” 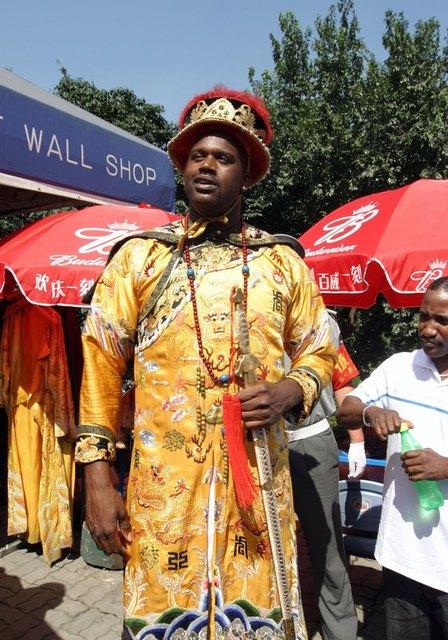 Here's a cringe-inducing Shaq quote: “Tell Yao Ming, ‘ching-chong-yang-wah-ah-soh.’” Shaq also performed Bruce Lee maneuvers while saying this.  There's something about O'Neal's well-intentioned personality, though, that let's this fly, and even Yao himself was cool with it.

Did Shaq party at the Parthenon when he went to Greece? “I can’t really remember the names of the clubs that we went to.”

Shaq showed his deep knowledge of cultural lineage when talking about his Heat coach, Pat Riley: “He’s the Italian version of my father. I don’t know if he’s Italian or not.” Riley is Irish.

Shaq Takes You to School 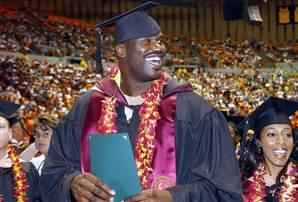 “There is no answer to the Pythagorean theorem. Well, there is an answer, but by the time you figure it out, I got 40 points, 10 rebounds and then we’re planning for the parade.”

“He awokened a sleeping giant.  I know that’s not a word.”

“Nietzsche was so intelligent and advanced.  And that’s how I am. I’m the black, basketball-playing Nietzsche.”

“For all my friends in the media who like quotes, mark this quote down.  From this day on I’d like to be known as ‘The Big Aristotle’ because Aristotle once said, ‘Excellence is not a singular act; it’s a habit. You are what you repeatedly do.’” 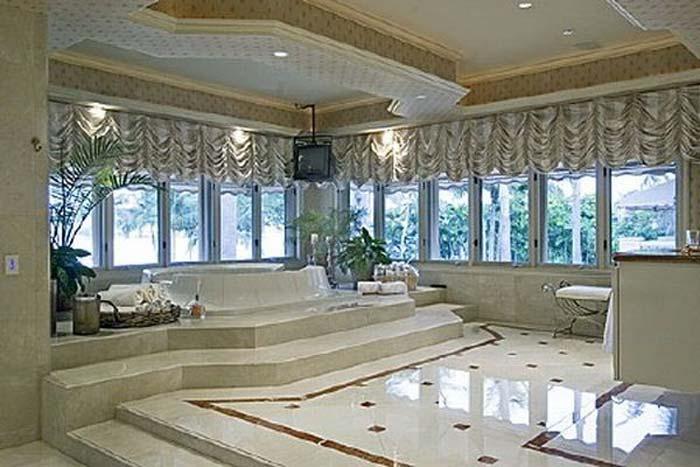 Reaching for the ultimate in humor, Shaquille O'Neal often played the poop card.

“But can’t nobody [****] with me. I’m like toilet paper, Pampers and toothpaste. I’m definitely proven to be effective.”

After injuring his thumb, Shaq was asked if it was a dirty play: "I don’t think so.  I don’t know. Just glad I got my thumbs back. You know, for six weeks, I couldn’t even wipe my furniture."

How Shaquille O'Neal deals with life's little problems: “I’m going to be on a mission. I’ve handled my personal vendettas and handled them well. Every challenge you put in front of me, I’ve handled it, dismantled it—ate them, dropped them off in the bathroom and flushed them away.”

After Shaq had drained 12 free throws one night, Sacramento Kings' coach Rick Adelman complained that O'Neal was stepping over the foul line.  Shaq's response: “That game was dedicated to Rick Adelman. I’m at home, in the bathroom, trying to take a dump, flipping through the channels and he’s complaining [on TV] about how I’m stepping over the line. I can’t even do a No. 2 in peace. I’m sitting there grunting at 12:30 at night. Can I go one day without somebody saying something negative about me?”

Photo: Shaquille O'Neal's bathroom is bigger than my apartment at flavahome.com 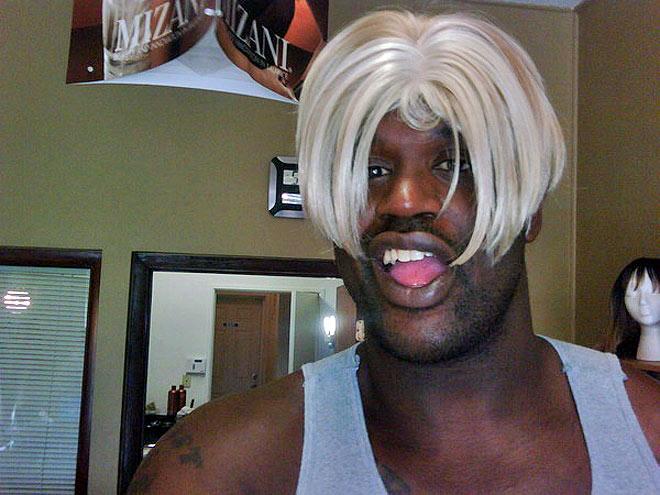 Shaquille O'Neal loved trash-talking, especially calling out fellow players and coaches as, well, ladies.  Some of these quotes might incur a fine today.  Shaq probably saved himself some money by retiring.

“I’m not worried about facing the Sacramento Queens."

“I don’t think anything of Laura Frank. You heard me—Laura Frank. Not Lawrence. Laura…It’s not that I blame him, I just wish he’d go to a manly tactic and just fight me. Don’t whine. When he whines, that’s when I change his name of Lawrence Frank.”

“He looks like a woman coach sometimes. I guess he’s just trying to get into certain people’s heads, but it won’t work with me. Like a woman who coaches and cries all the time. He can’t get in my head. He’s a crybaby.”

After Jerry Stackhouse was called for the flagrant, Shaq said: “My impression was my daughters tackle me harder when I come home...It actually felt pretty good to get hit like that. Thank you, Jerry, I appreciate it.”

“He could be dominant—if he played in the WNBA.”

“The Spurs are a great WNBA team.”

Shaq and Yo Mama

Shaquille O'Neal is the best "Yo Mama" disser in the NBA, as this video shows.  He takes it well too. You have to love the big man's sense of humor here.

I counted six good Shaq Mama jokes in there. 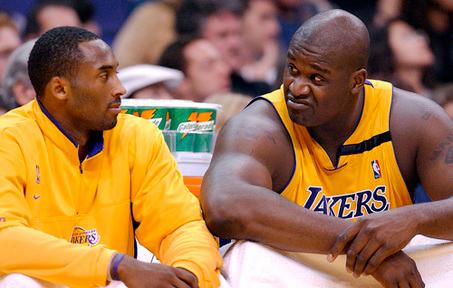 Shaq always brought on the ugly when talking about ex-teammate Kobe Bryant:

O'Neal (big dog) was always complaining that Bryant (little) was a ball hog.

“Why did it happen?  The big dog got fed.  And when the big dog was fed, the little dog even got some meat in there, too.  Big dog owns the domain, but the little dog can go wherever he wants.”

They had completely different personalities:

“He’s just intelligent—sort of a nerd, actually.  He’s the only brother I know who made a 1420 on the SAT.  I don’t think Chris Dudley did that, and Mr. Smarty Pants went to Yale.  Kobe doesn’t hang out.  He doesn’t go to the clubs.  He doesn’t ride around.  He doesn’t put rims on his car.  He’s just him.  He’s a sophisticated kid.  Damn mature for his age.”

ESPN: Do you ever see the day where it would be possible for you to sit down, have a talk with Kobe Bryant?

“Kobe always tried to be a hero.  But you know, as the saying goes, a hero ain’t nothing but a sandwich.”

The Shaq Rap on Kobe

Hysterical, especially starting around one minute.  The crowd gets into it, singing the chorus: "OK. Kobe...tell me how my a** tastes." 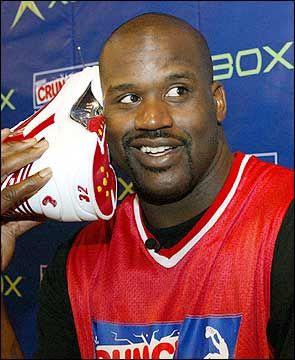 Finally, these quotes were too good to let go:

Here’s a guy who only played one or two seasons injury-free, and now he’s talking about me being injured....Like I said, Mr. Walton has broken the Big Man Ordinance Code, 225.27.  No big man under should talk about a big man above.  It’s just not right, and that’s just disrespectful.  And I earn my respect.”

On why Shaq never played for the Knicks:

“I think it’s a great city. I think it’s a fabulous city. But in my young juvenile days, I was an idiot, and I bought 30 cars. And I need to drive those cars, and New York isn’t really the place you can do that.”

I think we can all agree with Shaq on this one:

CRAIG SAGER: What do you plan to do after the All-Star game to get better?

SHAQ: Buy you a new jacket.

CRAIG SAGER: What’s wrong with this one?

Finally, after the NBA's first outdoor game (a preseason one in 2008 between Shaq's Phoenix Suns and the Denver Nuggets), O'Neal said:

Thanks Shaq, for the play and the say!

See you in the Hall of Fame.