NASCAR: 7 Bold Predictions for the Aaron's 499 at Talladega 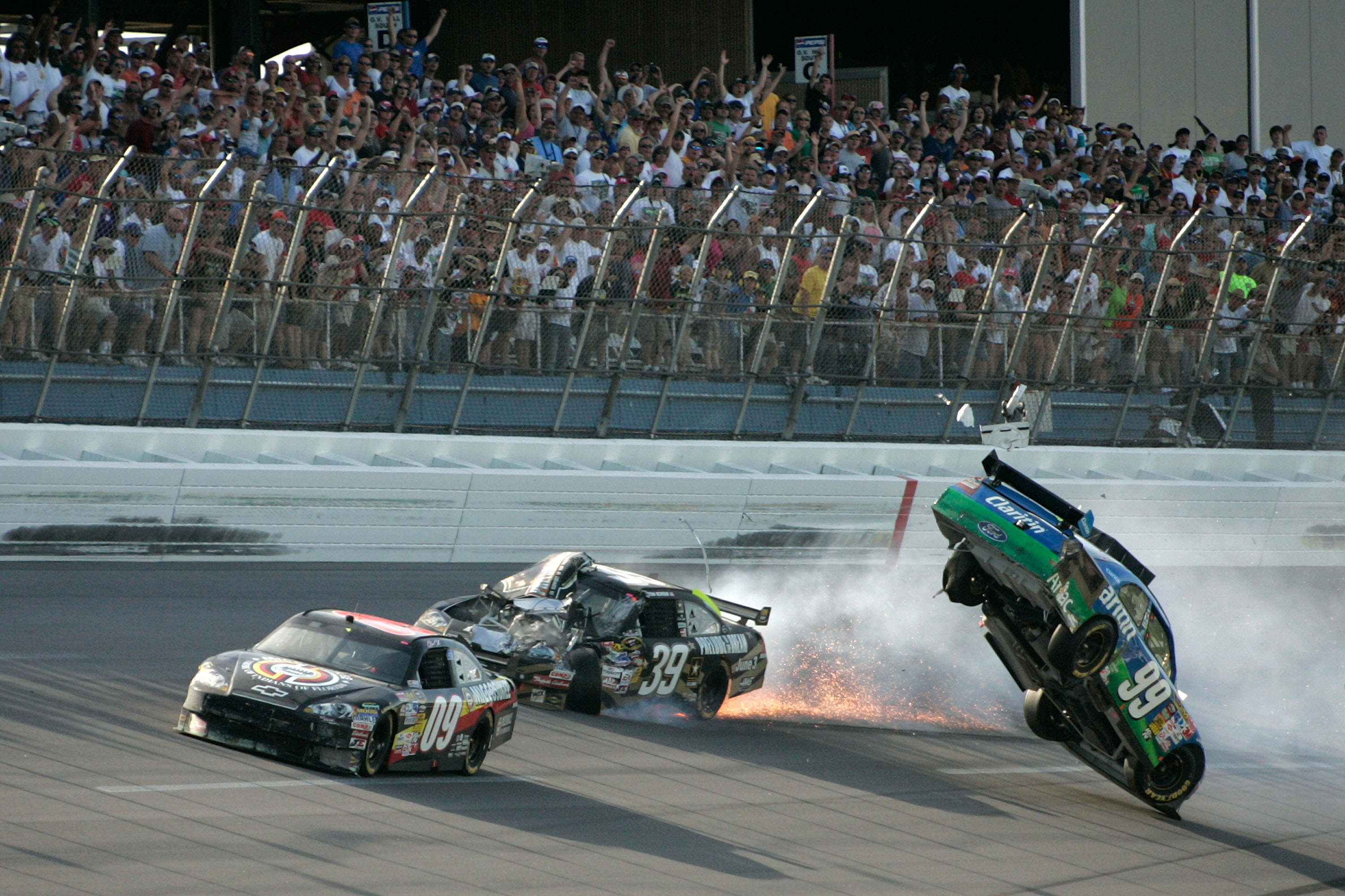 This Sunday, the Sprint Cup series heads to Talladega Superspeedway, the longest track on the circuit.

Frightening wrecks, airborne cars and even a few fatalities over the years have resulted from restrictor-plate racing and the high speeds at Talladega. The excitement and the unpredictability of the racing keep fans coming back for more every year.

What can we expect to see at Talladega on Sunday? Read on to find out.

Paul Menard Will Have Another Strong Run 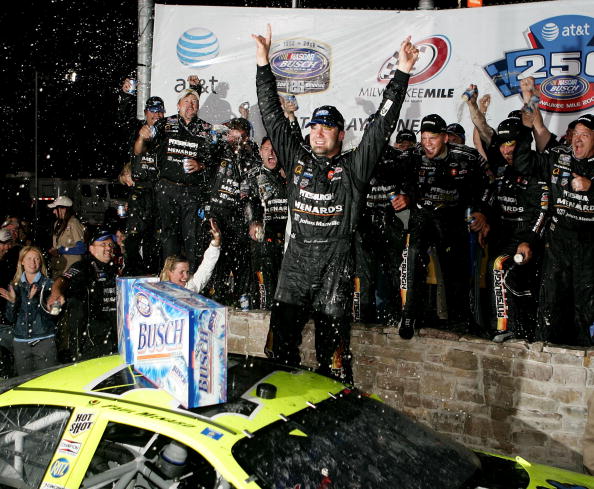 Paul Menard won at Milwaukee in the Busch Series in 2006.Jonathan Daniel/Getty Images

Menard has scored his best finishes of his career at six of the seven tracks the Sprint Cup series has visited so far in 2011. Last week, I predicted that he would score a top five, and Menard did not disappoint. With a fifth-place run, the No. 27 team bounced back after a rough race the previous week at Martinsville.

I don't think Menard will score a career-best finish at Talladega on Sunday. Menard's all-time best Sprint Cup finish was at Talladega in 2008, when he finished runner-up to Tony Stewart. However, I do think he'll have another strong run and continue to make his case for a spot in the 2011 Chase.

Menard has four top-14 finishes in his last six Talladega races—about as consistent as any driver can hope for with the randomness that ensues with the infamous Big Ones and the recent two-car drafting.

Now that Menard has RCR power under the hood (RCR drivers have won the last two Talladega races), he can legitimately challenge for the win with a strong run. Menard ran well at Daytona in the first restrictor-plate race of 2011. If he can avoid trouble, Menard will be near the front when the checkered flag waves on Sunday.

Dale Jr. Will Lead Laps and Finish in the Top 5 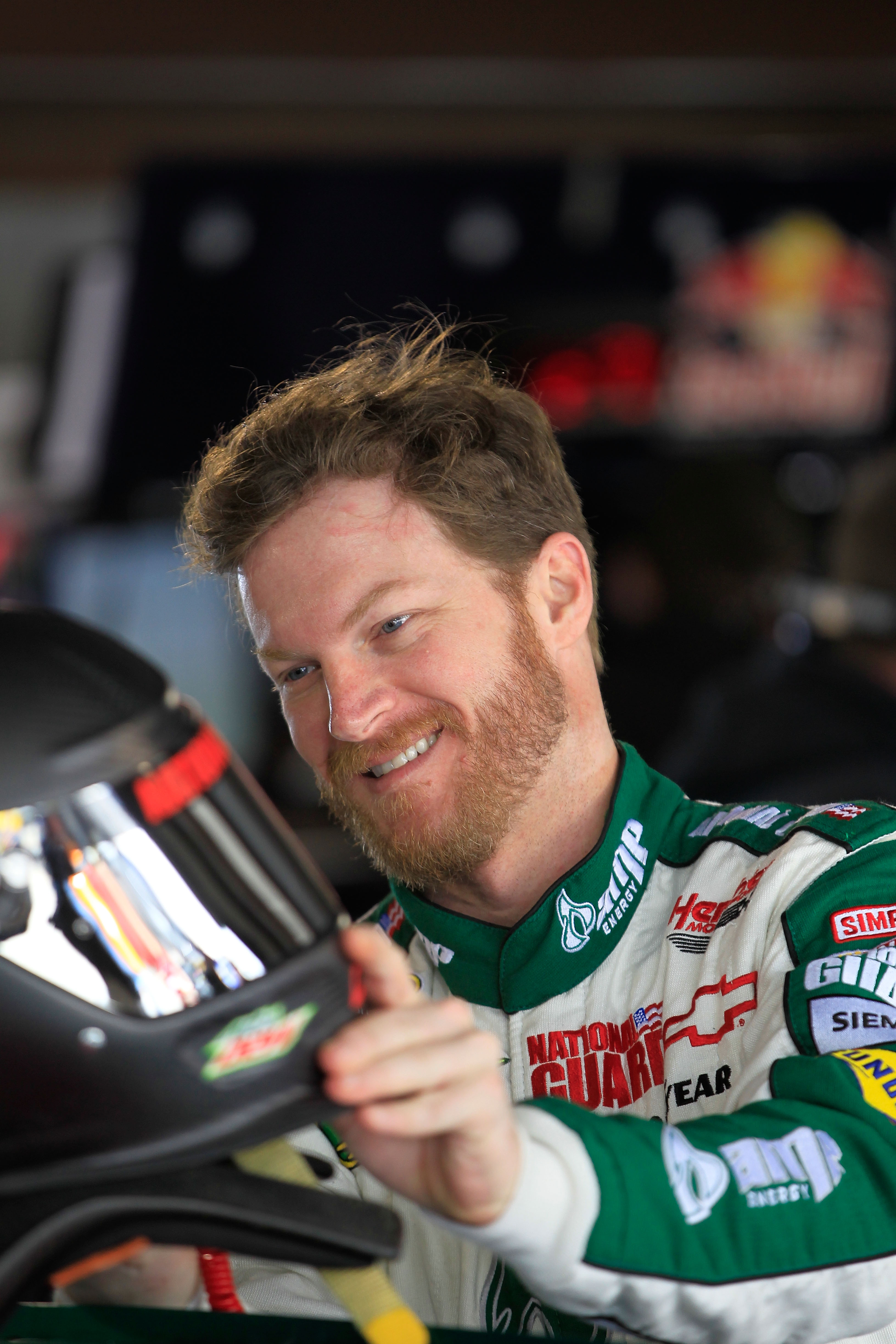 This doesn't seem like a bold prediction until you realize that Junior has just one top five in the last 12 races at Talladega. But it is still obviously one of Junior's best tracks.

Dale Jr. has five Talladega wins with nearly 700 laps led. Although he hasn't won at Talladega since 2004, Junior has led laps in the last 10 races at the track. So he's still a threat to win any time the series come to Alabama.

Recently, Junior has managed to find trouble near the end of most Talladega races. But his luck is due to change sooner or later. Two-car breakaways could prove to be the winning ticket on Sunday, as they were at Daytona earlier this year, and Junior has always had success at finding good drafting partners.

If he can avoid trouble, Junior has as good a shot as any driver to be the one celebrating at the end of the race. 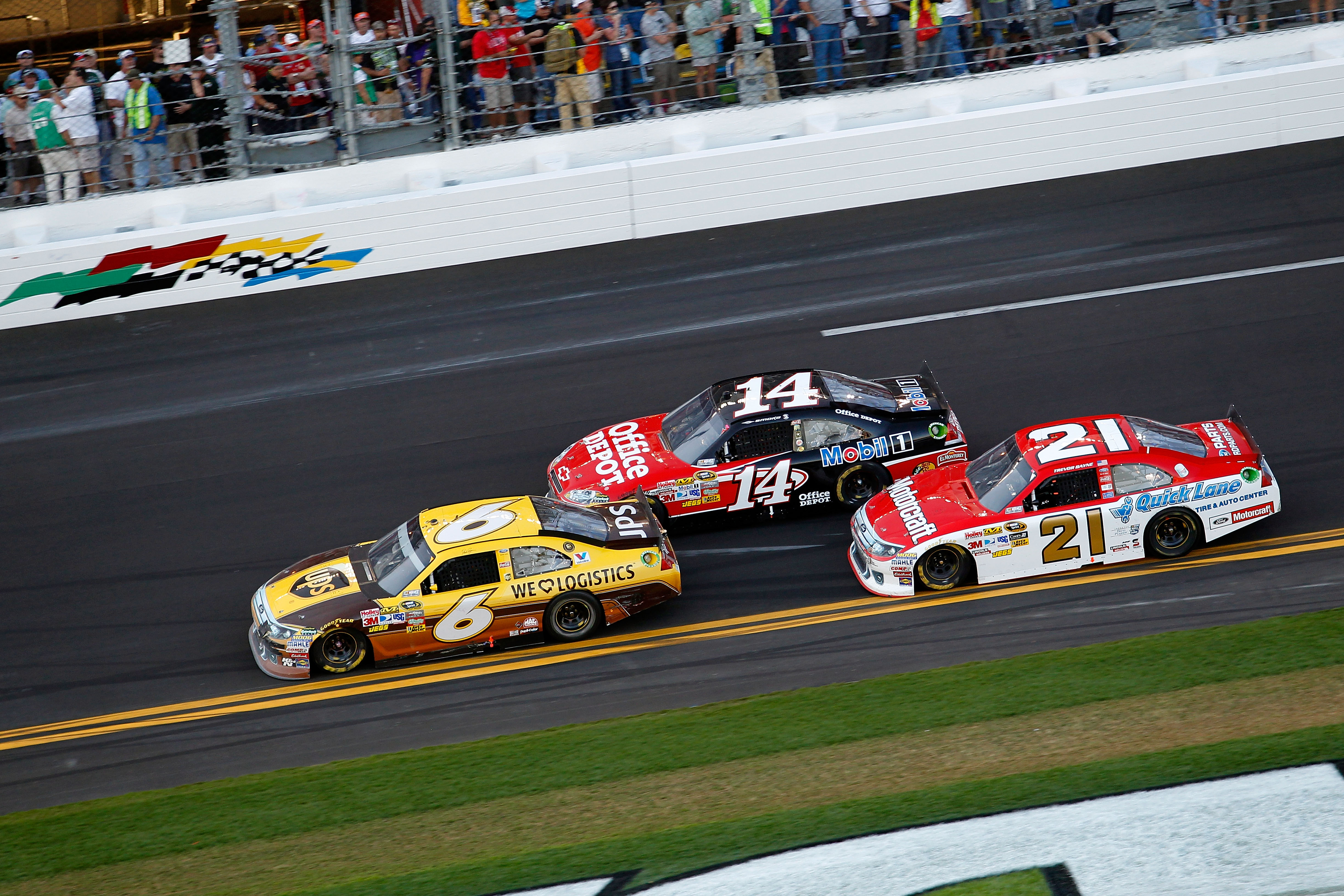 David Ragan has finished on the lead lap in the last six races at Talladega. He has three finishes of sixth or better during that span, and should be considered a dark-horse candidate for the win.

Ragan had one of the strongest cars at the Daytona 500. He appeared to have the car to beat until he was black flagged for changing his lane before reaching the start-finish line on a late restart.

With another restrictor-plate race this Sunday, Ragan will be looking for revenge at Talladega. He has momentum on his side with consecutive top 10 finishes at Martinsville and Texas.

In contrast, his Roush Fenway teammates are spotty at Talladega at best. Greg Biffle has only two top 10s in 16 Talladega starts, Carl Edwards has three in 13 races and Matt Kenseth has just three top 10s in 23 Talladega events.

With another strong restrictor-plate run, Ragan will top his three teammates this Sunday.

The Strongest Car Will Not Win the Race 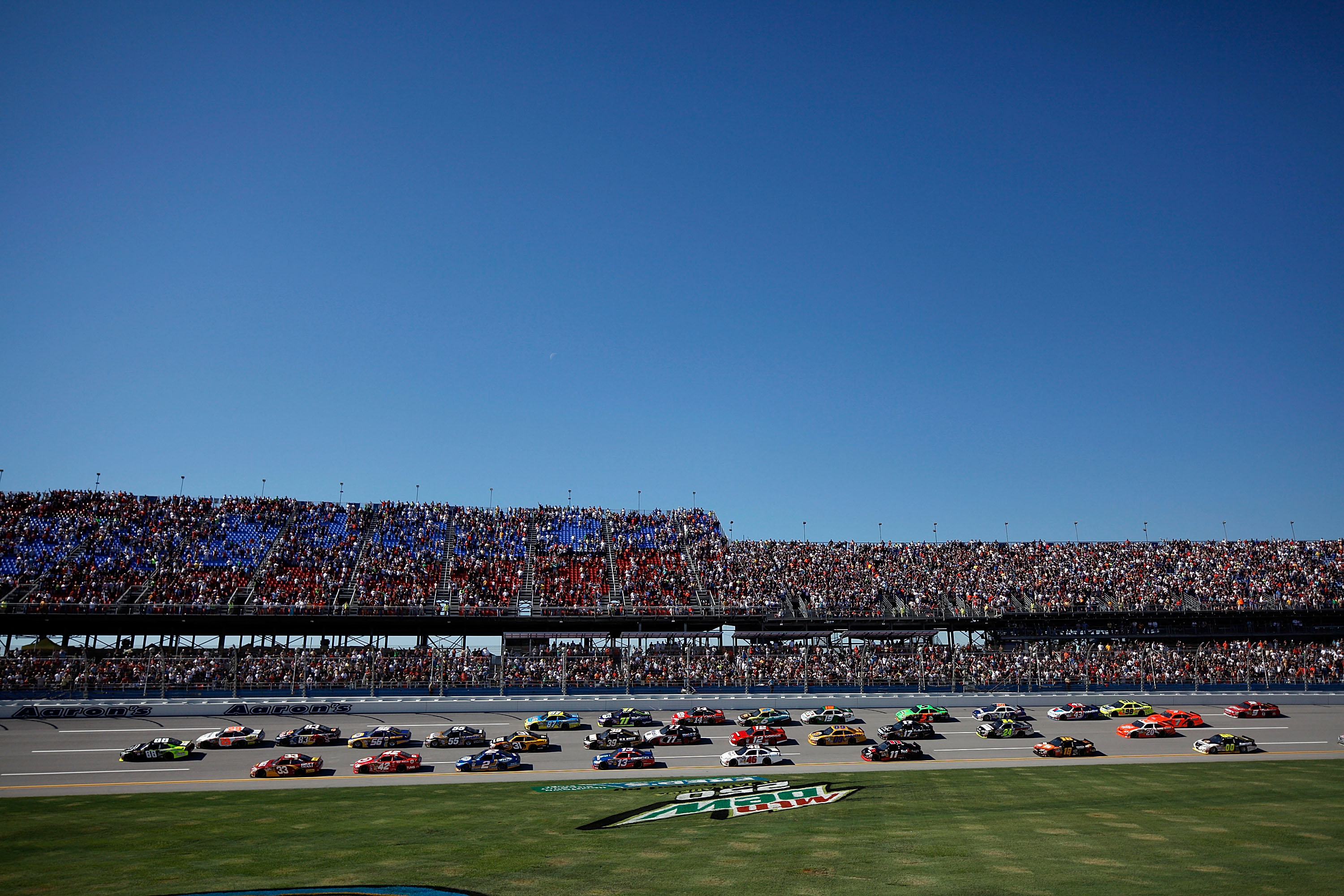 This wouldn't really be all that surprising at Talladega. There are so many variables out of one's control during restrictor-plate racing that uncertainty is the only thing drivers can count on.

The final top 10 is often a crap shoot of who happens to be in the right place at the right time. 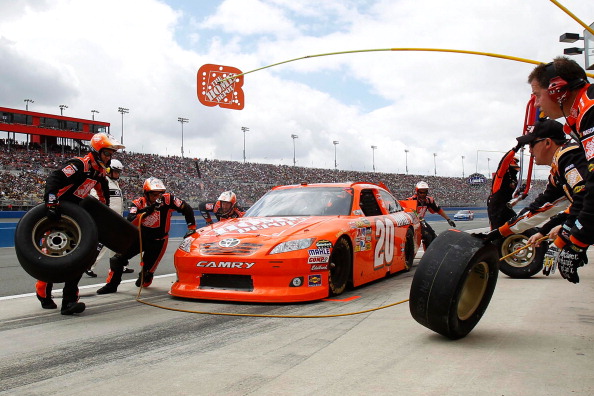 Logano has also led laps in each of his four races at the track, although never more than nine in a single race.

If Logano can continue to stay out of trouble, odds are he'll be the highest-finishing JGR driver on Sunday. 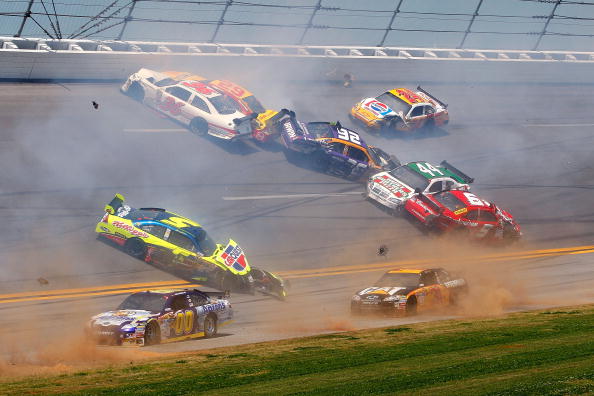 Fans may not like it, but playing it safe is often the best strategy at Talladega.

Drivers realize this is a long race. So many will adopt the strategy taken by drivers like Jimmie Johnson and Jeff Gordon in recent years—riding around the back of the pack until the last 20 laps or so.

It's not possible to win the race until the end, but it sure is easy to end your day early with an ill-timed move, overly aggressive driving or simply being in the wrong place at the wrong time.

I expect there to be at least one Big One, but not until the final 10 percent of the race, and the total number of cautions will be surprisingly low.

The last several restrictor-plate races have seen record numbers of lead changes, but I expect that to change this Sunday. With fewer cautions to bunch up the field, the racing will get strung out and the day may be dominated by a small number of drivers.

There will be action from time to time and exciting runs by two-car packs carrying momentum for several laps at a time—especially at the end of the race. But for the most part, drivers will elect to play it safe and avoid putting themselves in dangerous situations, leading to a low number of cautions and fewer lead changes than in recent years. 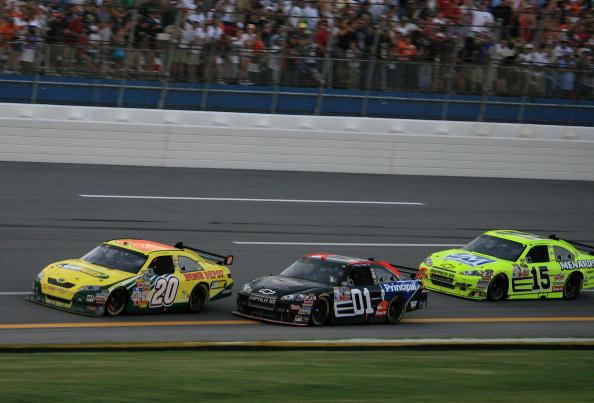 Restrictor-plate racing has long been known for producing exciting and unpredictable results.

Remember when Brad Keselowski won the 2009 April Talladega race as a virtual unknown?

Or when Regan Smith crossed the finish line fist in 2008, but was disqualified for infamously passing Tony Stewart beneath the yellow line?

Possible underdogs for the win include David Gilliland (who finished third in the Daytona 500 this year), A.J. Allmendinger, Regan Smith, Paul Menard (who was pushing Smith and finished second in 2008 to Stewart) and David Ragan.

No one knows who will surprise at Talladega, but history tells us that anything can happen.