Arsenal vs. Blackpool: Five Things We Learned from Arsenal's Win 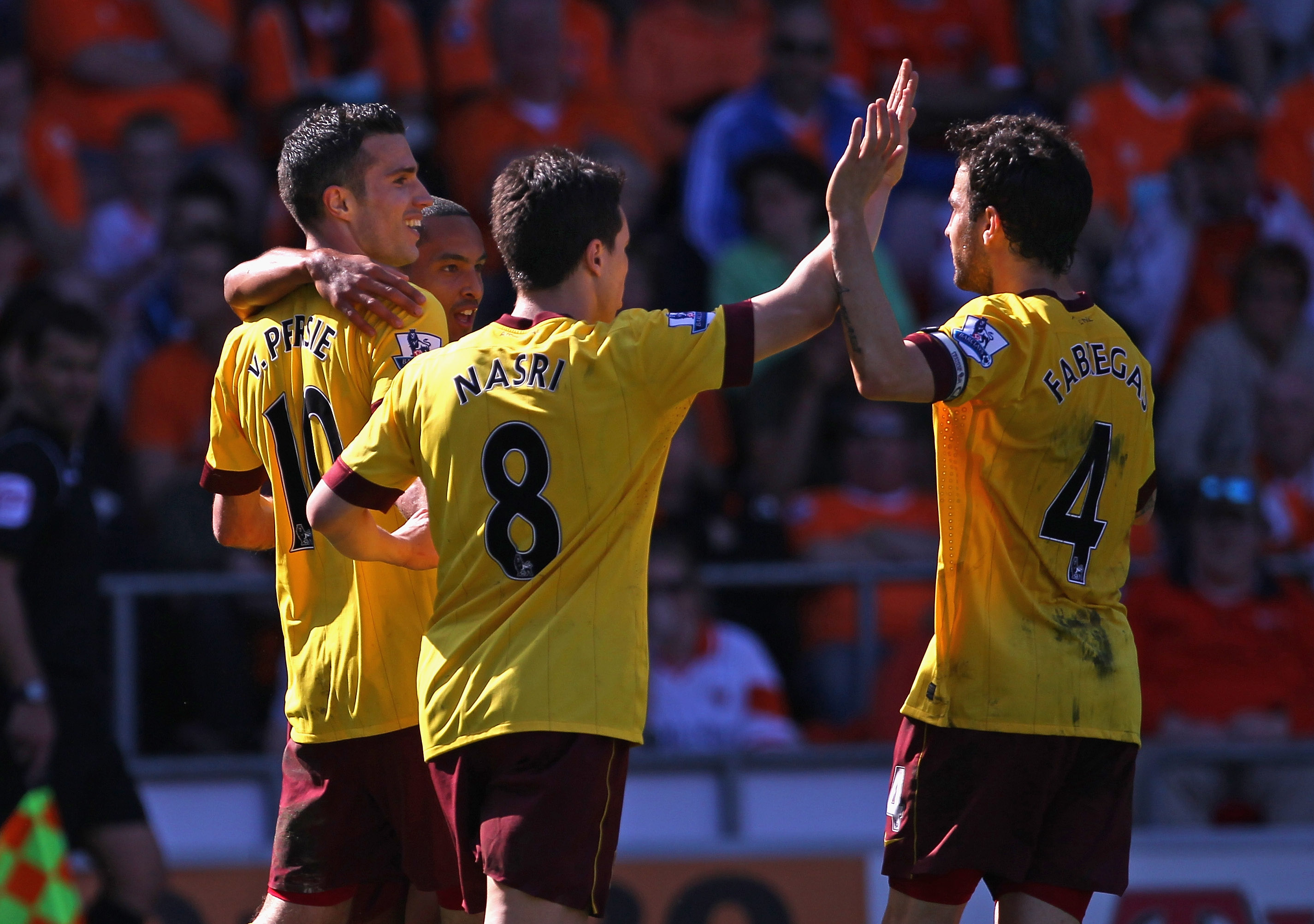 Arsenal finally ended a streak of three consecutive draws with a 3-1 win over relegation threatened Blackpool. Arsenal’s last three games in the League included goalless draws against Sunderland and Blackburn at home, and a 2-2 draw with West Brom at the Hawthorns.

The string of draws, combined with Manchester United’s win on Saturday, had extended the lead of the Red Devils to 10 points on the top of the table. Thanks to Sunday’s win, Arsenal are now seven points behind the leader with a game in hand.

While Manchester United are still clear favorites to lift an historic 19th domestic crown, this win gives Arsenal an outside chance to end their trophy drought and has lifted the pressure on them from Chelsea and Manchester City.

Jens Lehmann made his much awaited return after Manuel Almunia picked up an injury right before the game. The goals for the Gunners came from Diaby, Eboue and Robin van Persie. Arsenal’s captain Cesc Fabregas made his return to the starting lineup while Diaby and Eboue came in for the injured Song and Sagna respectively.

While this win was expected and nothing less than a win would have helped the Gunners, it was an important victory considering their recent form. One can hope that this will help bring back the confidence to the team after a string of disappointing results.

Here is a look at the things we learned from this fixture.

Abou Diaby May Have a Future at the Emirates 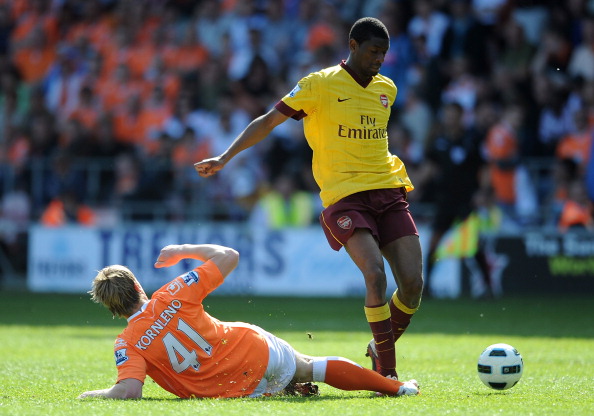 After the Sunderland match, I had stated that both Denilson and Abou Diaby had to be sold in the summer and, while I still believe that keeping Denilson will do more harm than good, my opinion on Abou Diaby has changed a bit following his impressive performance against Blackpool.

Not only did he score the first goal for the Gunners with a simple tap in, his overall performance was much improved, as he used his strength well and brought the ball out from the back well. He was surprisingly good with his tackling as he won several tackles and shielded the defense well in the absence of Alex Song.

Diaby once again showed that he has the ability to go from being frustratingly inconsistent in his decision making to world class in the very next game.

In the game against Blackpool, he dawdled on the ball too often, choosing to dribble with the ball when a more viable pass was open.

Arsenal’s first and third were started by Diaby with the first one being finished by the Frenchman. The first one started when he won the ball in midfield. He then played a pass to Fabregas, who unleashed a flowing pass to van Persie, who then unselfishly squared the ball for Diaby to finish.

The third had him show good strength and bring the ball out of the midfield and pass to Fabregas.

Diaby’s usually nonexistent decision-making was spot on against the Seasiders and he was surprisingly assured and comfortable in possession.

Diaby has some qualities that can make him a world class player but his constant injuries and inconsistent form means that most times he ends up making a mockery of himself with some truly ridiculous performances.

While he may not be an exact like replacement for Song, considering his positional indiscipline and inclination to go forward, he does possess talent and capability that could see him continue at the Emirates next season.

Arsenal's Lack of Ruthlessness in Front of Goal Is Worrying 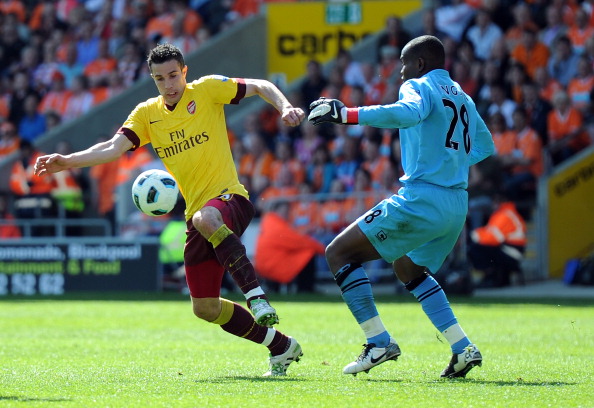 While a 3-1 scoreline may be a relatively comfortable scoreline, the truth was that Arsenal should have wrapped up the game going into halftime. One could not help but feel that had the Gunners been a bit more ruthless and clinical in front of goal, they could have cruised home relatively easy, and instead of facing Blackpool’s pressure in the second half.

In almost every Arsenal match it is usual to see them dominate possession, create plenty of chances and yet manage to score not more than two or three.

Blackpool undoubtedly have the worst defense in the entire league. The marking is virtually nonexistent and they always attempt to play the offside trap with much futility. Arsenal’s center forward, Robin van Persie, constantly managed to evade the offside trap and Fabregas put in one of his best performances in an Arsenal jersey in quite some time. Yet the Gunners managed only three goals.

Despite getting into some good positions, the Gunners time and time again failed to take their opportunities and the match that at one point looked like it was heading towards a route ended up being a fairly close match.

Blackpool even got a lifeline and had Lee Mason rightfully awarded them a penalty, then they might have gone away with at least a point.

But in almost every Arsenal match you can see, the Gunners throw away chances that should be finished at this level. Poor finishing was evident in the Blackburn fixture and we have seen it countless times in the last few seasons, Arsenal will dominate possession, create a wave of chances and yet score only one or two only to pegged back by a resilient opposition.

The title race is really heating up with Arsenal having plenty of catching up to do, and in such a situation, the last thing they can afford is missed chances.

This week, Arsenal might have played Blackpool, but they have tough matches against Manchester United, Liverpool, Tottenham and Bolton coming up, and such profligacy and shoddiness in front of goal will definitely be punished by these sides.

Jens Lehmann Can Make an Impact 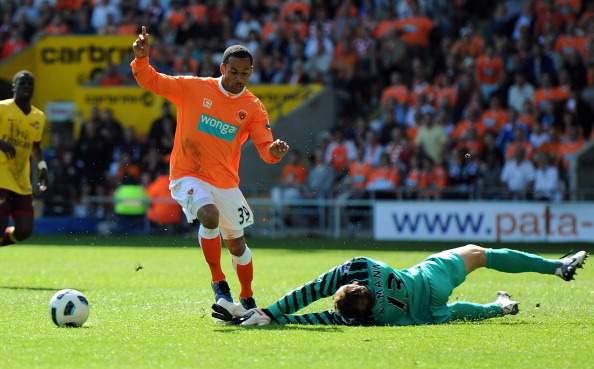 The last time Jens Lehmann rushed out to meet an attacker, it got him sent off and cost the Gunners the UEFA Champions League. Five years later, he once again brought down D.J. Campbell in the Arsenal box and luckily for the Gunners, the referee chose to play advantage which allowed Blackpool to score, and ironically for the Gunners that was the best thing that could have happened to them.

Had the referee awarded a penalty, then he would have sent off Jens Lehmann and with no replacement keeper Arsenal would have been doomed.

Jens Lehmann might be the oldest player to represent the Gunners in the Premier League, but he still showed that despite aging, there hasn’t been any change in him. From rushing out madly to his icy cold stare and, not to mention, a good stop to keep the score line 3-1, Lehmann was still the man who left Arsenal three years back.

And if the words of young Jack Wilshere are taken into account, then he was of great assistance to the side. Many doubted if he still had it after spending close to a year in retirement. That, combined with his age, made many doubt him and while this performance doesn’t guarantee anything, it does show that Lehmann isn’t as bad as some doubted him to be and promoting him as first choice keeper may do the squad a world of good.

It not only adds a decent keeper to the side, it also adds a bit of leadership to the side that has been missing in recent weeks. 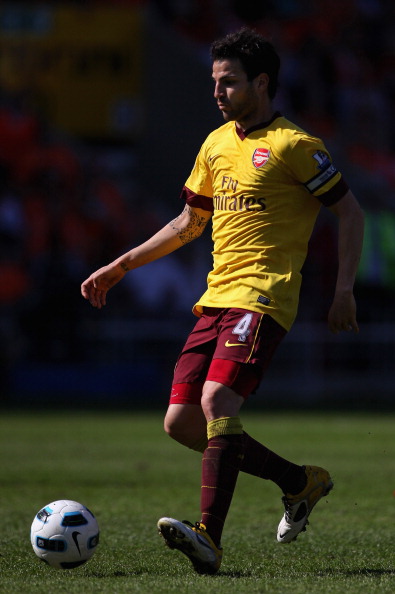 The Fabregas to Barcelona saga is turning out to be one of the most protracted transfer sagas in long time and it is all set to resume this summer. Now Fabregas has always expressed his intentions of going to his boyhood club, Barcelona, but La Blaugrana have never met Arsenal’s evaluation, offering an amount that is too less for one of the best midfielders in world football right now.

This season, he has been plagued by injuries and way too often Wenger has used him much too quickly which has resulted in him struggling and putting up below-par performances. But this time, Wenger eased him back slowly and it was evident how devastating he can be when firing.

His combination with van Persie was pure class as he and the Dutchman continuously carved open the Blackpool defense. Fabregas has always formed an extremely potent partnership with van Persie, and on Saturday it was all too evident.

Blackpool’s defense was carved open on multiple occasions and the only reason they didn’t score was some poor finishing.

Arsenal’s dependency on Fabregas has reduced this season with the rise of Jack Wilshere and Samir Nasri. But Arsenal’s passing game has another dimension with the Spaniard on their team. Van Persie and Fabregas link up beautifully, a partnership that becomes even better with Walcott on the team, which was epitomized by Arsenal’s third goal.

If Fabregas’s long awaited move to Barcelona does indeed materialize, then Arsene Wenger may just be prompted to use the likes of Wilshere, Nasri or Ramsey in his role. There is no doubt that all these three players are hugely talented and could replace Fabregas, but the former two are a bit too young and inexperienced at the moment, while Nasri lacks the vision and creativity that Fabregas has.

Arsene Wenger should either convince him to stay or, if he goes, sign a proper replacement, a player who can immediately fill the shoes of Fabregas. An experienced player will fit the bill perfectly.

Not signing a proper replacement would be a step backwards for the club and Arsenal have to keep progressing at the moment. 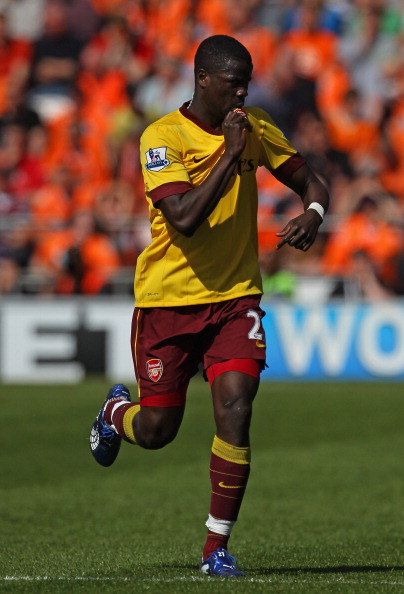 Last season, Emmanuel Eboue made a total of 36 appearances. While this season, he has only made 24 appearances with just 10 in the league. Out of those ten appearances, he has had just five starts.

Since he was booed off against Wigan Athletic; he has put in some exciting performances that has seen him win the fans over. Arsene Wenger prefers Sagna to Eboue, due to Sagna’s defensive discipline. Eboue does have a habit of being run over by quick and tricky wingers.  But he did perform fairly well in the matches against Blackpool and in Arsenal’s victory over Barcelona in February.

But Eboue is an extremely versatile player who can dribble extremely well and when going forward, he has the ability to be deadly down the right flank. His versatility means that he can play as a right winger and he has the ability to be more successful than Rosicky and maybe Arshavin. While Arshavin has more talent than him, the Russian’s indifferent form and laziness in tracking back means that Eboue too could be an extremely viable option for Wenger.

Against Blackpool, he took most of the opportunity given to him thanks to the injury to Bacary Sagna as he scored his first goal this season with a powerful strike into the top corner.

Eboue is extremely popular in the dressing room and is one of the most hard-working and energetic performers on the team and his energy could come in handy in the title race.