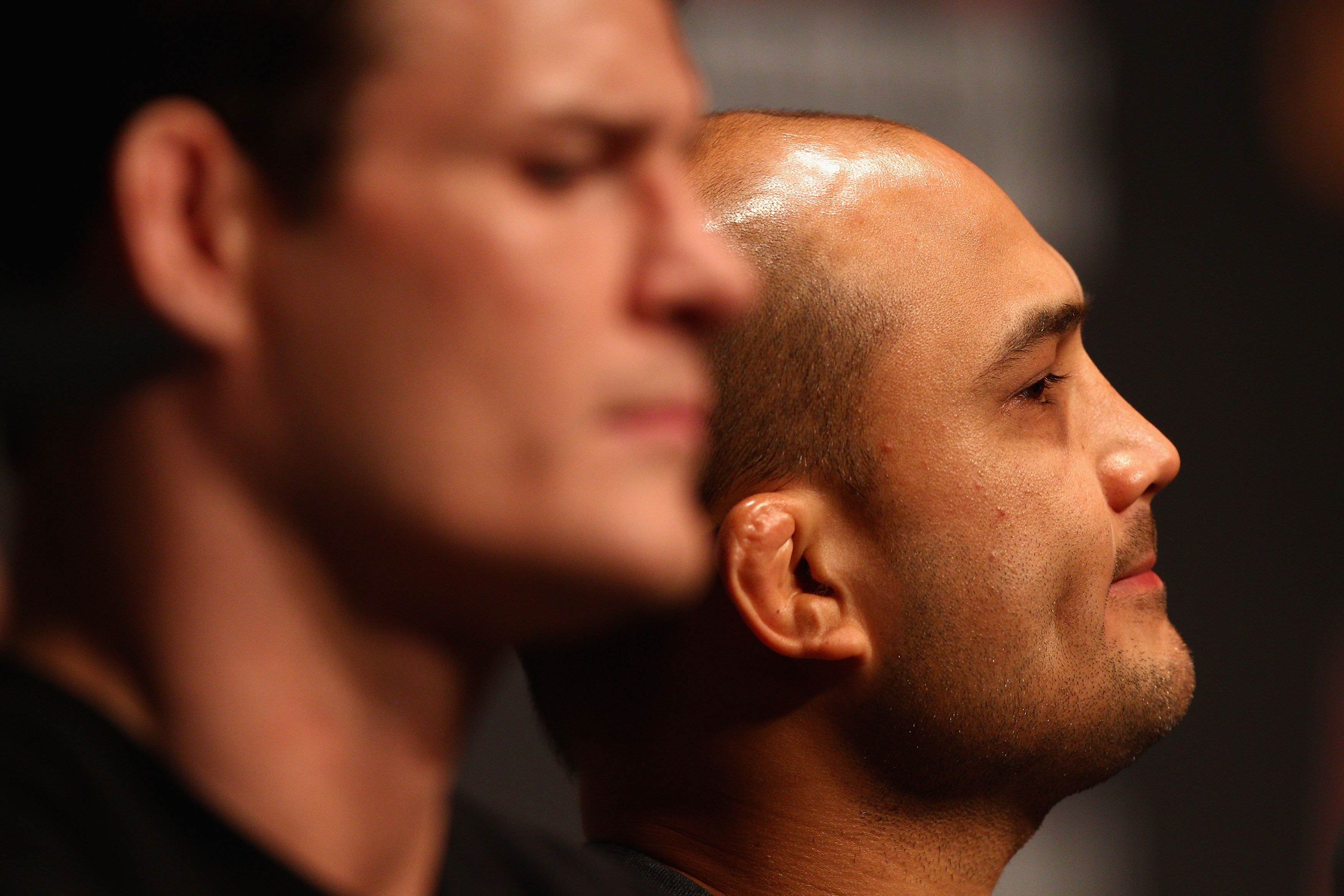 When Carlos Condit was forced out of his UFC 127 fight with Chris Lytle, UFC newcomer Brian Ebersole was named as a replacement. Because he has never fought in the Octagon, Ebersole is far from a household name, but his record speaks for itself.

Ebersole has won 46 fights during his eleven year MMA career, which has included wins over multiple former UFC fighters. Currently, Ebersole has won eleven of his last twelve fights, and that one loss came against Hector Lombard, who is widely considered one of the best middleweights outside of the UFC.

Ebersole holds a win over a former UFC Welterweight Champion in Carlos Newton. Additionally, Ebersole has fought many more current and former UFC fighters such as Stephan Bonnar, Ed Herman, and Kyle Noke.

Defeating a UFC veteran like Lytle on short notice will be no easy task, but Ebersole's experience makes him a fighter that should never be overlooked. Here are ten videos that should help fans familiarize themselves with Ebersole...and if you missed it, check out the UFC 127: Lytle vs. Ebersole Pre-Fight Interview featuring both men, courtesy of UFC.com.

As you can see, Brian Ebersole has had experience against much larger opponents than Chris Lytle. Despite Josh Mueller answering his request to touch gloves with a flying knee, Ebersole was able to quickly dispose of his opponent with a rear naked choke in 37 seconds.

Of course, Lytle will be in much better shape than Mueller, but Ebersole had to start his climb to better competition somewhere. This win marked the beginning of a run in which Ebersole won 12 of 13 fights.

While Ebersole will have to cut some weight to make 170 pounds, the 6'1" fighter could still have significant size advantage over Lytle come fight time.

Like many fighters cutting their teeth in smaller promotions, Brian Ebersole was forced to fight twice in one night on multiple occasions. After his aforementioned win over Josh Mueller, Ebersole took on another larger opponent in Jamie Schell.

After weathering the storm on the ground in the first round, Ebersole knocked Schell out early in the second round. The patience that Ebersole showed in this fight will be a valuable tool against another experienced fighter like Chris Lytle.

Before his fights with Josh Mueller and Jamie Schell, Brian Ebersole competed in another two-fight event with Ultimate Wrestling Minnesota. This time, Ebersole was giving up a whopping 60 pounds to Mark Lowry.

Early in the fight, Ebersole's chin was tested and it passed with flying colors. After taking Lowry's best shot, Ebersole slammed his much heavier opponent and proceeded to finish Lowry with an arm triangle.

Ebersole has the strength and chin to potentially cause Chris Lytle problems at UFC 127.

In the fight, Ebersole once again used powerful takedowns and slams en route to victory. Fans should expect Ebersole to attempt a similar game plan against Chris Lytle, who is a former professional boxer.

Brian Ebersole met current Strikeforce and former WEC fighter Bret Bergmark in September 2002. In what was an extremely closely contested fight, Bergmark was named the winner by split decision.

Although Ebersole lost the fight, he once again put on a show for the fans in the process. While his strength is in his wrestling, Ebersole is not afraid to stand and trade blows with any opponent.

Bergmark's only MMA loss came against Mike Pyle, who recently defeated John Hathaway at UFC 120 and is scheduled to fight Ricardo Almeida in March 2011.

Brian Ebersole's UFC 127 fight with Chris Lytle will not mark the first time that he has stepped up to take a fight on short notice. While trying to improve his striking skills at Tiger Muay Thai in Thailand, one of Ebersole's training partners was injured and unable to compete. Just hours before the fight, Ebersole stepped in and went to win the muay thai fight in devastating fashion.

Ebersole's background is in wrestling, but this fight in 2009 showed that he has become a capable striker as well. More importantly, it showed that Ebersole is focused on becoming a well-rounded mixed martial artist.

Although Brian Ebersole came out on the losing end of his championship fight against Hector Lombard, this fight showed his toughness and interesting personality.

As he made his entrance, Ebersole's confidence was on full display. Then, Ebersole removed his shirt and revealed that he had shaved his body hair into the shape of an arrow pointing toward his own chin.

Before losing in the fourth round of the fight, Ebersole threw everything he had at Lombard. Ebersole cut Lombard with and elbow and even landed a cartwheel kick late in the first round.

Win or lose, Ebersole always puts on a show for the fans. Fighting four-time Fight of the Night winner Chris Lytle, this is a fight that no fan will want to miss.

In October 2006, Brian Ebersole went all five rounds of a championship fight with The Ultimate Fighter participant Kyle Noke. In the end, Ebersole came out on the wrong end of a split decision.

Noke, a middleweight who will also be fighting at UFC 127, is undefeated in two fights with the UFC, so a close loss to him is nothing that Ebersole should be overly discouraged about.

Having fought some excellent middleweight fighters, it will be interesting to see if Ebersole's size and experience against larger fighters will play any factor in his fight with Chris Lytle.

In a special rules fight designed to favor his opponent, Otto Merling, Brian Ebersole won in spectacular fashion. You may have noticed Ebersole's cartwheel kick attempts in some of the earlier videos, but he was able to actually end a fight with one against Merling.

It would be an almost fairytale entrance to the UFC if Ebersole is able to finish Chris Lytle with a cartwheel kick, but don't be surprised if he at least attempts the technique in his debut.

Ebersole has remained extremely active throughout his entire career. In fact, Ebersole just fought in Australia less than one month before UFC 127. Also, Ebersole already had another fight scheduled before accepting the fight with Lylte, so he will be in excellent shape on February 26, 2011.

Brian Ebersole appears to understand the opportunity he is being given with a fight against Chris Lytle. Ebersole traveled to Australia early to begin training for his fight at UFC 127. It won't be easy, but a win over Lytle would bring instant recognition to Ebersole from fight fans worldwide.

Sean Smith has been a Featured Columnist for Bleacher Report MMA since October 2010. For the latest insight and updates on everything MMA, you can follow Sean on Twitter @BR_Sean_Smith.