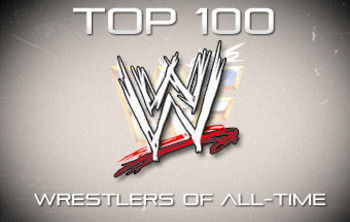 Time spent with other organizations, even if they were an affiliate of WWE, is not being considered on my list. 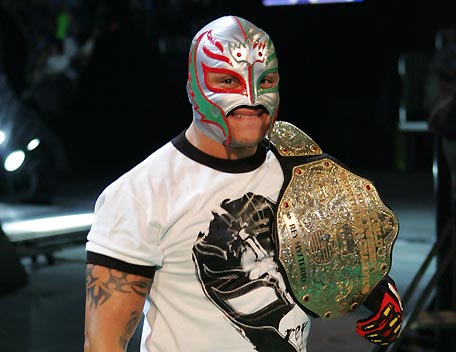 Most WWE fans are taller then the next wrestler on my Top 100; coming in at 40 is Rey Mysterio Jr.

The underdog Mysterio came to the WWE in 2002, and won the Royal Rumble four years later. 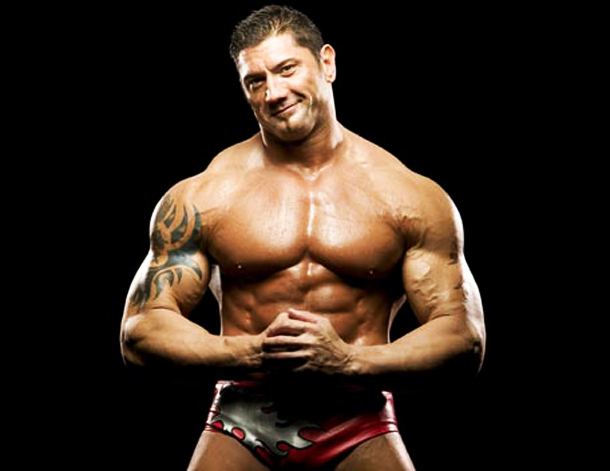 Getting a late start in the wrestling business, Batista made it to the big leagues in the WWE at the age of 33.

Batista's stock really took a rise when he joined Evolution, with members Triple H, Ric Flair, and Randy Orton.  In my opinion, it is still one of the greatest stables of all-time, just wish it lasted longer.

Batista's first big win came at WrestleMania 21, when he defeated Triple H for the title.  On that same night, another wrestler that came up around the same time as him, John Cena, won the WWE Championship, defeating JBL.

Batista left WWE in early 2010 with no plans to return, but he has left a nice legacy behind and is Hall Of Fame-bound if he doesn't burn any bridges; just ask Bruno Sammartino about that. 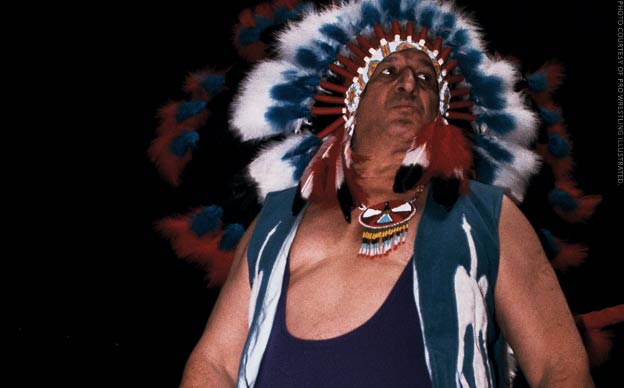 WWE Legend Chief Jay Strongbow was inducted into the WWE Hall Of Fame in 1994.

Strongbow was a four-time Tag Team Champion, but never won any singles titles within the company.

He came close on a few occasions of winning the big one, but wasn't successful.  However, he wrestled in many main events and always put on a great show.

Strongbow had many memorable rivalries within the company, with the likes of Spiros Arion, Jimmy Valiant and Superstar Billy Graham. 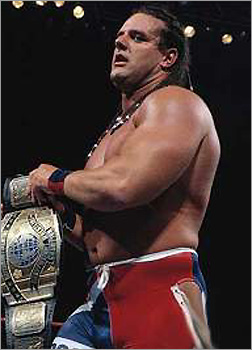 The late British Bulldog Davey Boy Smith comes in at number 37 on the Top 100.

Along with his partner, Dynamite Kid, they would win the Tag Team Championships in 1986, defeating The Dream Team at WrestleMania 2.

His WWE Intercontinental Championship Match with Bret Hart at Summerslam 1992 at Wembley Stadium, in which he defeated Bret Hart for the title, is one of the greatest matches in WWE history.

In his return to WWE in 1994, he would never reach the level he was at earlier in his career. 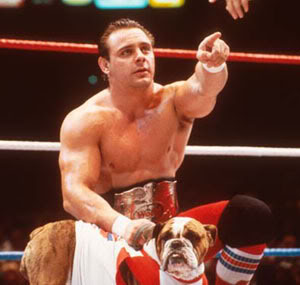 Dynamite Kid will be remembered for his Tag Team Championship victory with Davey Boy Smith at WrestleMania 2 against The Dream Team.

However, I will always think of Dynamite Kid as one of the most underrated/misused wrestlers in WWE history.

His toughness and willingness to stay on his feet during a match was amazing to witness.

Chris Benoit was close to a splitting image of Dynamite Kid in the ring, and it looks as if Benoit built his entire in-ring career of that of Kid. 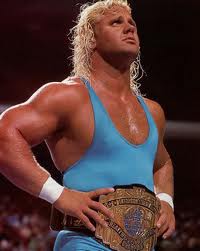 The next wrestler on the list is nearly perfect, and is perfect if you asked him.

Mr. Perfect, Curt Hennig, was undefeated in the WWE for nearly a year on WWE television, with his first loss eventually coming to Brutus "The Barber" Beefcake at WrestleMania VI.

Hennig nearly won the 1990 Royal Rumble, and was part of the final two wrestlers in the ring, only to have the great Hulk Hogan eliminate him.

Despite being a two-time Intercontinental Champion and his induction into the WWE Hall Of Fame in 2007, Hennig could never quite get out of the mid-card status that he was held inside of in his WWE career.

He was just a victim of WWE letting only a few guys have the spotlight during those years, and everyone else was hung out to dry. 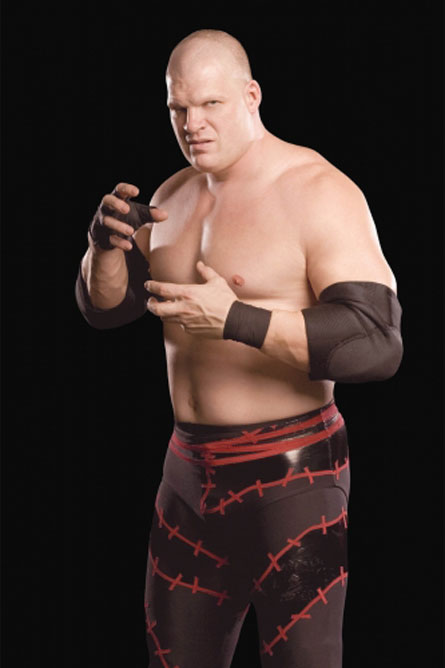 I will be the first person to admit that I never thought Glenn Jacobs' Kane character would last this long.

After the horrible Issac Yankem DDS, and Fake Diesel gimmicks, you would figure all was lost for Jacobs in WWE.

However, in 1997, the big guy became The Undertaker's long lost half-brother and when you get paired with a name like The Undertaker, things can happen for you, fast.

Fast forward to 2010, Kane's character is still going strong and just recently dropped the World Heavyweight Championship to Edge after a long feud with the Rated R Superstar.

These accomplishments have him officially listed as only the third Grand Slam Champion in WWE history, which consists of only 10 wrestlers. 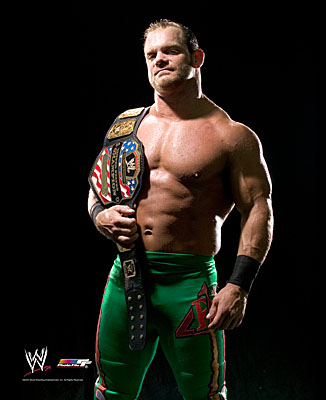 Chris Benoit will forever be linked to the tragedy outside of the squared circle and will never be in the WWE Hall Of Fame, nor mentioned on WWE televison again.

I would like to look past that, out of respect of his wrestling career and what happened outside the ring, shouldn't factor into it.

Benoit was also a four-time WWE Intercontinental Champion, as well as the winner of the 2004 WWE Royal Rumble.

It was that victory at the Royal Rumble that took him to the main event at WrestleMania XX, where he shocked the world and defeated Triple H and Shawn Michaels in a Triple Threat Match, and was embraced by long time friend Eddie Guerrero after the match, who retained the WWE Championship a few matches prior against Kurt Angle.

That moment, as eerie as it seems now, is one of, if not, the greatest moment in WWE history.

Well scripted, but felt so real at the same time, since both men worked so hard to get to the top, and Guerrero had just won the WWE Championship prior to WrestleMania at No Way Out, allowing both men to reach the spotlight and the top of the mountain at the same time. 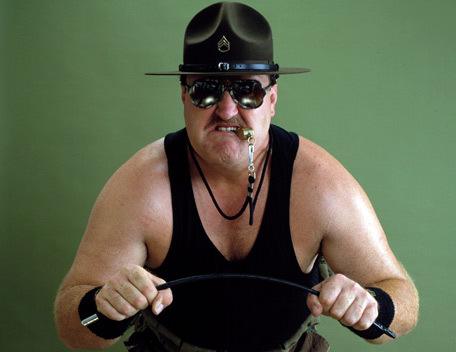 Slaughter only won the WWE Championship once, defeating The Ultimate Warrior at the 1991 Royal Rumble.

However, his memorable feud with Hulk Hogan at WrestleMania VII, during a time when the US was fresh off of the Gulf War against Iraq, ranks among the top feuds of all-time.

Slaughter, of course, lost the WWE Championship to Hulk Hogan, did you expect any different?

Slaughter was one of the greatest heels of all-time, but now is a beloved legend among the WWE Universe. 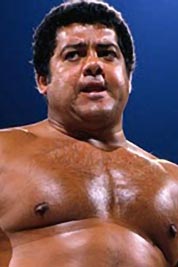 WWE Hall Of Famer Pedro Morales is one of the greatest Intercontinental Champions of all-time.

Morales was the third person to ever win the IC belt, by defeating Ken Patera at a house show in 1980.

He would hold the belt for half a year, before dropping the title to Don Muraco.

Muraco and Morales would exchange the belts one more time, this time, Morales would keep the belt for over a year, before losing it a final time to Muraco in 1983.

However, before all of that occurred, Morales would also be only the fourth wrestler to win the WWE Championship, defeating Ivan Koloff in 1971.

He would keep the belt for nearly three years before dropping it to Stan Stasiak, which was used as a buffer between him and Bruno Sammartino, as Sammartino would just win it nine days after Stasiak won it.

It was obvious Morales didn't want to drop the belt to Sammartino.