2011 NFL Playoffs: The 10 Best NFC Championship Games of All Time 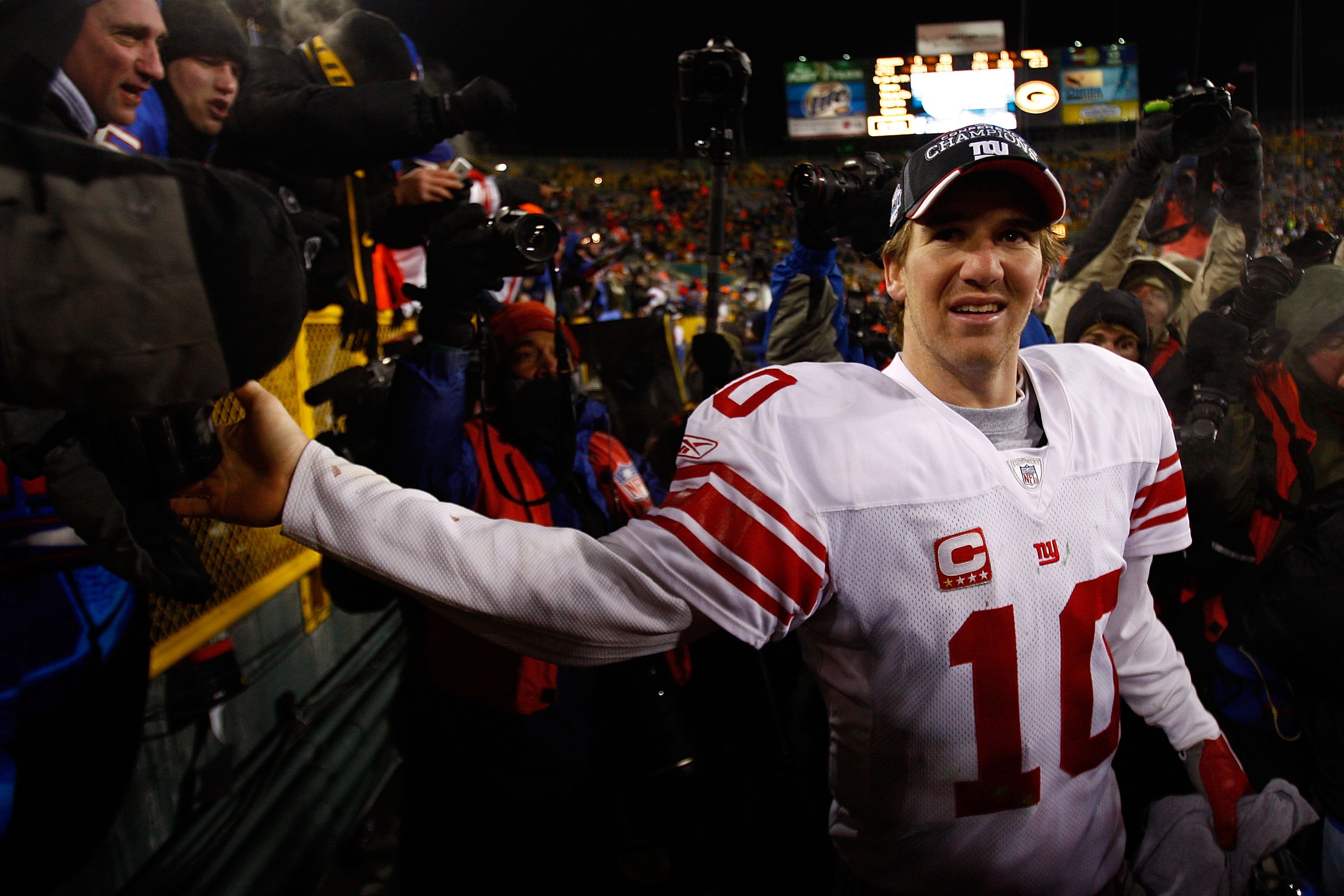 We have seen some amazing games over the years in the playoffs, especially in the AFC and NFC Championship games. 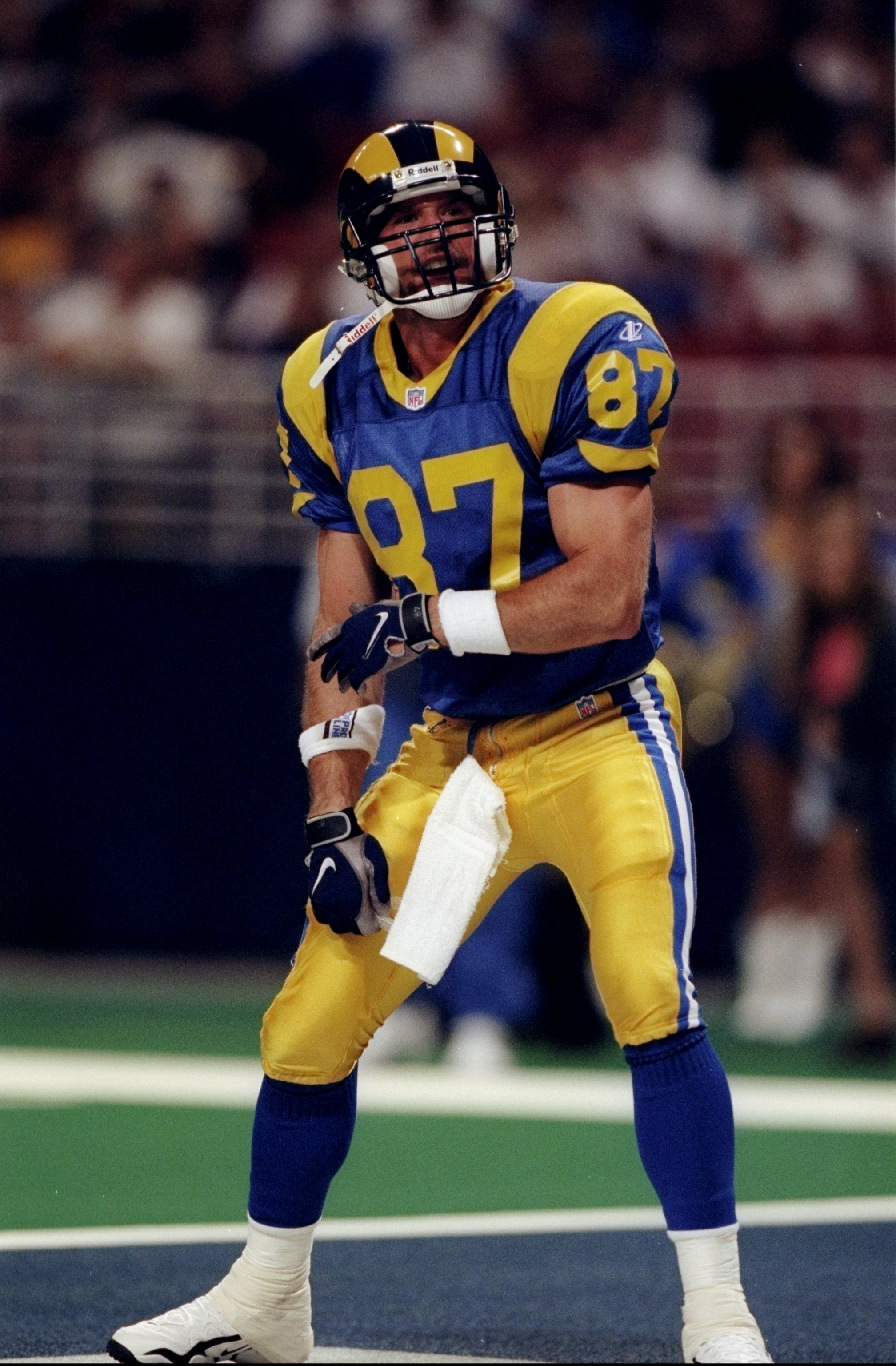 In the 1999 season, Kurt Warner and the St. Louis Rams earned themselves the name, "The Greatest Show On Turf."

However, that show was not so great against the Tampa Bay Buccaneers in the NFC Championship game.

Leading 6-5 late in the fourth quarter, the Buccaneers gave up the lead on a touchdown pass from Kurt Warner to Ricky Proehl with 4:44 remaining.

The Rams would go on and win a surprising defensive battle to move on to the Super Bowl and defeat the Tennessee Titans. 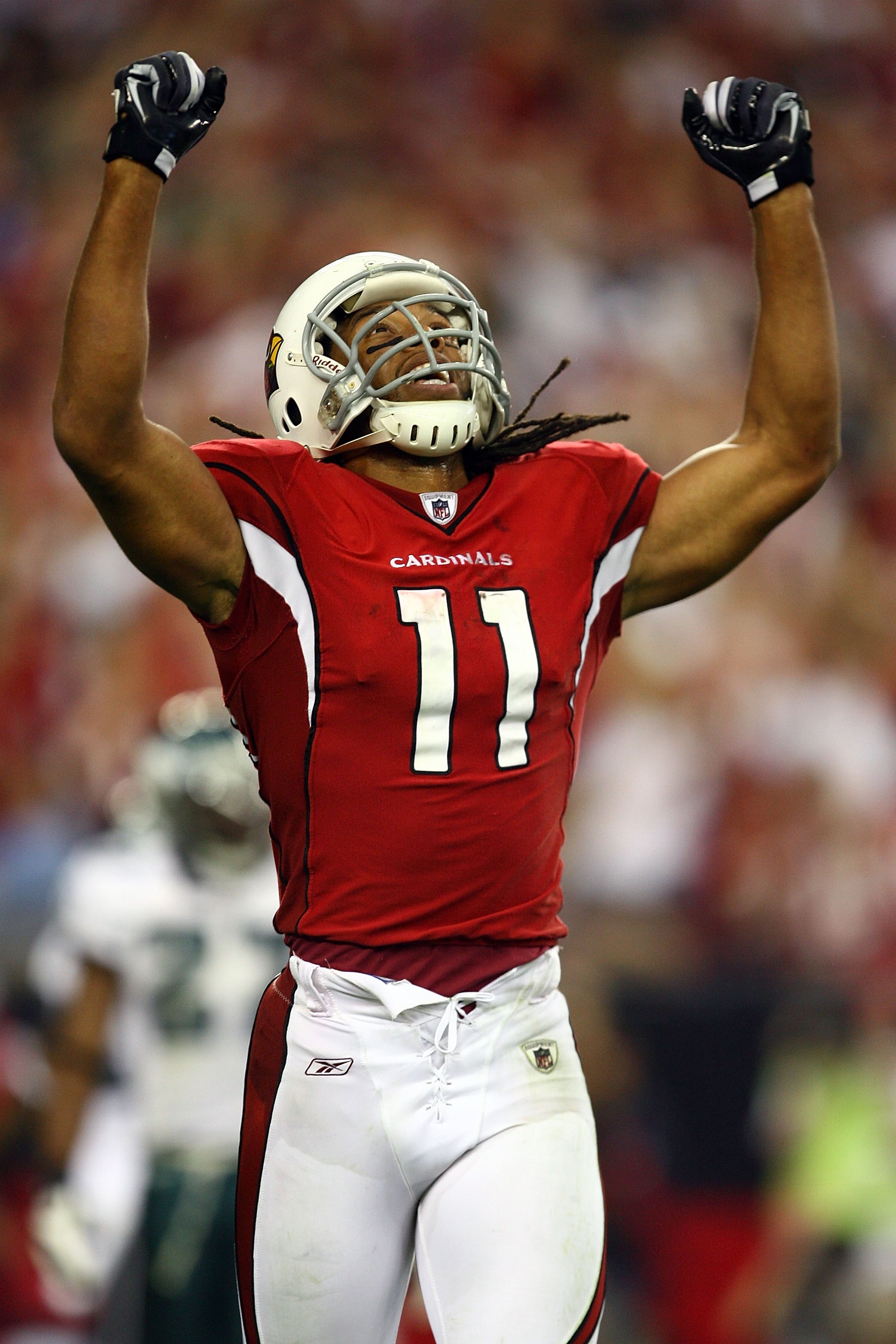 Kurt Warner and the Arizona Cardinals shocked the world by reaching the NFC Championship Game.

The Cardinals came out firing by going into halftime with a 24-6 lead.

The Eagle defense made some adjustments at halftime, giving up no first downs in the third quarter. After two Brent Celek touchdown catches, the Eagles were suddenly back in the game down 24-19.

Early in the fourth quarter, Donovan McNabb hooked up with DeSean Jackson on a 62-yard touchdown pass to give the Eagles a one-point lead, after a failed two-point conversion attempt.

Down 25-24, Warner hit Tim Hightower on an eight-yard touchdown to give the Cardinals the lead. It was 32-25 after the two-point conversion.

The Cardinals would hold on and go to the Super Bowl.

Larry Fitzgerald finished the game with nine catches for 152 yards and three touchdowns. 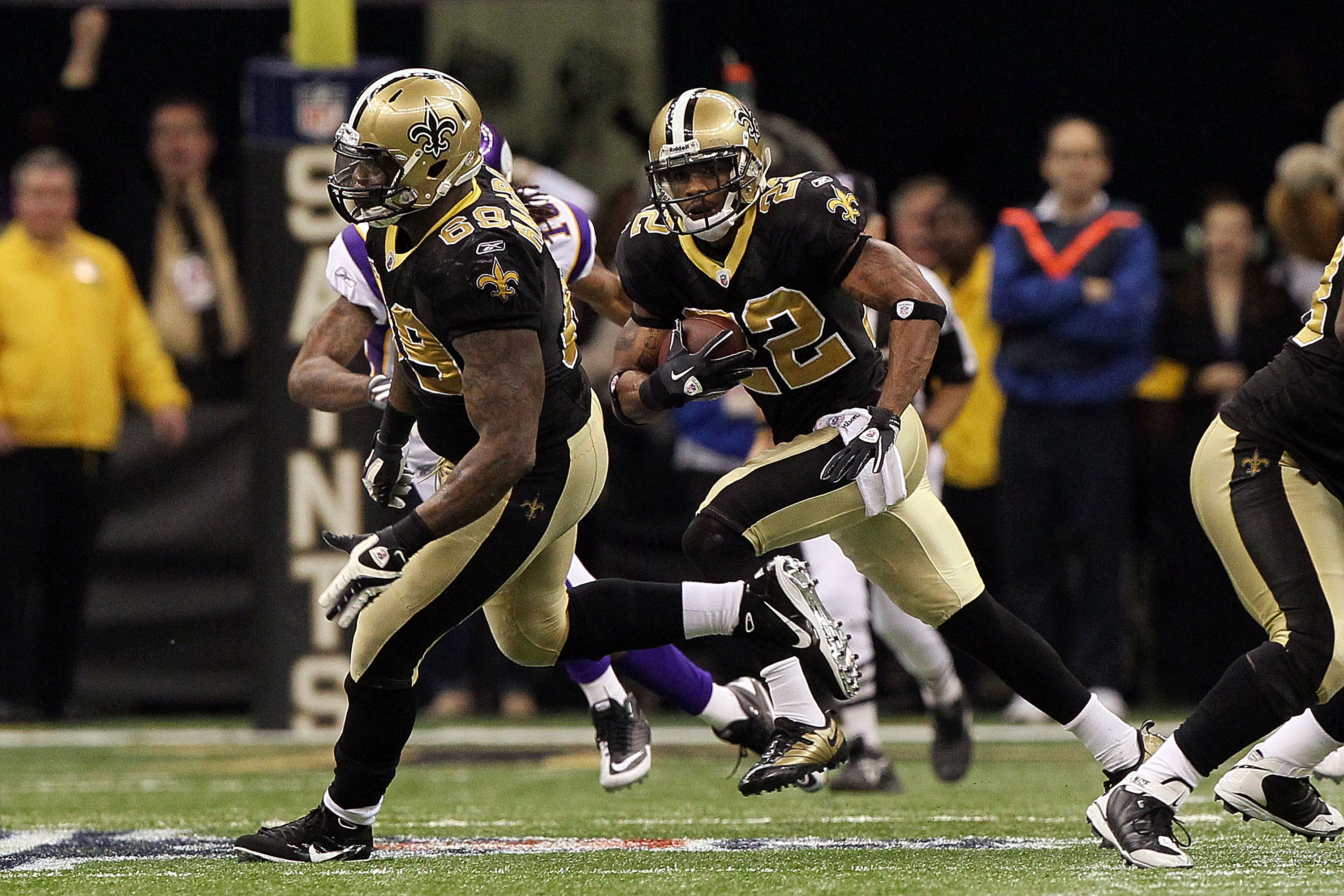 In a game where the Vikings out-gained the Saints by over 200 yards, the Saints took advantage of a key mistake made by Brett Favre.

With the game tied at 28 in the fourth quarter, the Vikings were close to field goal range, and then it happened. Brett Favre threw across his body and the ball was intercepted by Saints cornerback Tracy Porter.

The Saints won the toss and Drew Brees led them downfield to set up a game-winning 40-yard field goal by Garrett Hartley.

The Saints won 31-28 in overtime and went on to defeat the Colts in the Super Bowl. 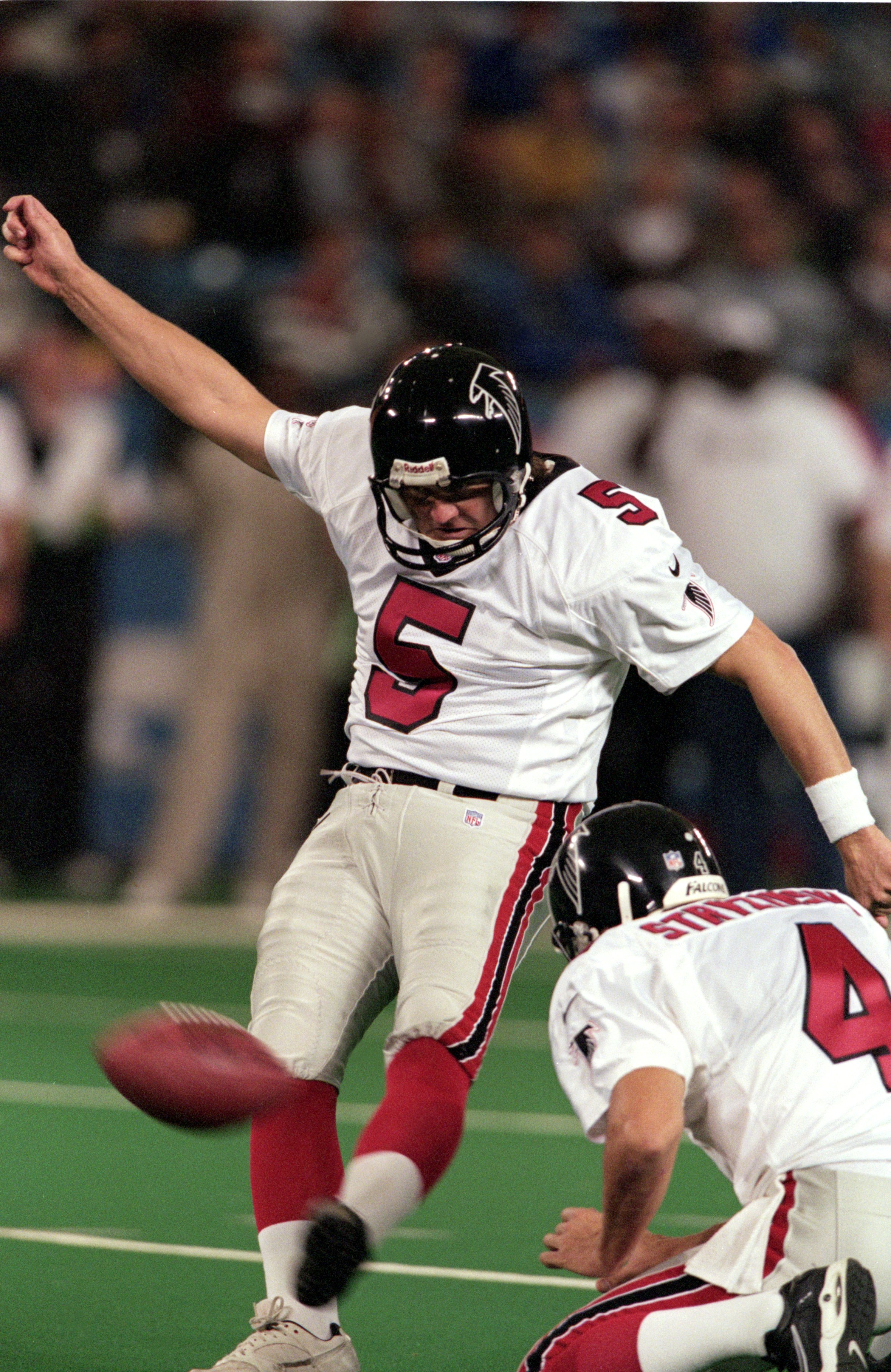 In Randy Moss' rookie season in 1998, the Minnesota Vikings scored an then-NFL record 556 points only to lose to the Atlanta Falcons in the NFC Championship.

Led by Randall Cunningham, Chris Carter and Randy Moss, the Vikings could not get passed the Falcons.

The Vikings became the first 15-1 team to fail to reach the Super Bowl.

Vikings'kicker Gary Anderson had to chance to give the Vikings a 10-point lead, but missed a 38-yard field goal after being perfect all season.

Falcons quarterback Chris Chandler then led his team downfield and hit Terrence Mathis on a game-tying touchdown to send it into overtime tied at 27. 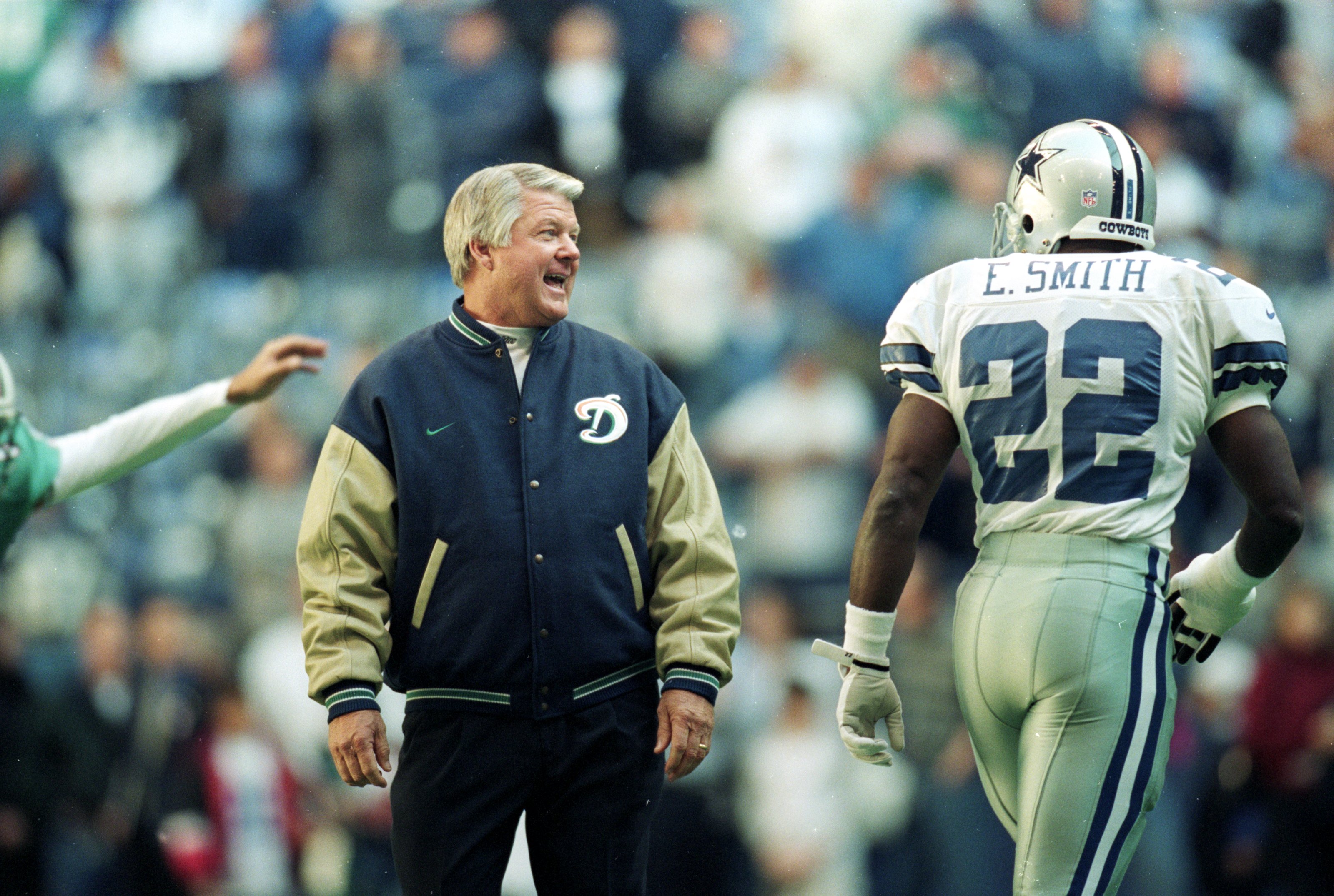 "How 'Bout Them Cowboys!"

This NFC Championship Game is not so much remembered for the game itself, but for Dallas Cowboys coach Jimmy Johnson's postgame speech.

However, Troy Aikman responded with a touchdown of his own, which was set up by a 70-yard reception by Alvin Harper on the previous play. 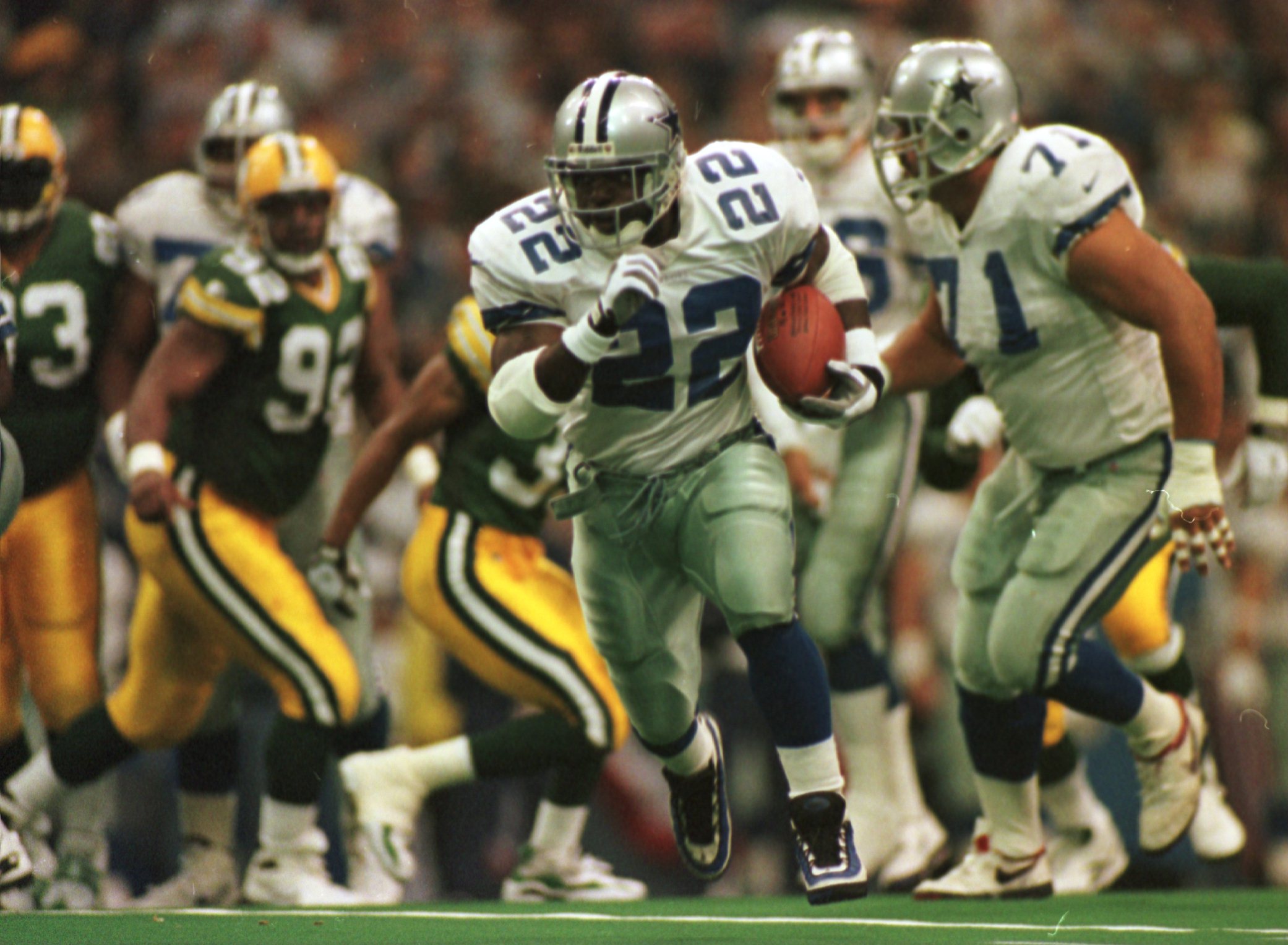 The Cowboys and Packers fought in a back-and-forth battle in this NFC Championship Game.

In a game of two great quarterbacks in Troy Aikman and Brett Favre, the Cowboys got the best of Favre in this one.

Down 27-24 in the fourth quarter, the Cowboys drove 90 yards to take the lead on a five-yard Emmitt Smith touchdown, his second of the game.

The Cowboys then intercepted a Brett Favre pass to set up a 16-yard Smith touchdown, his third of the game.

Smith's touchdown would clinch a trip to the Super Bowl with a 38-27 victory. 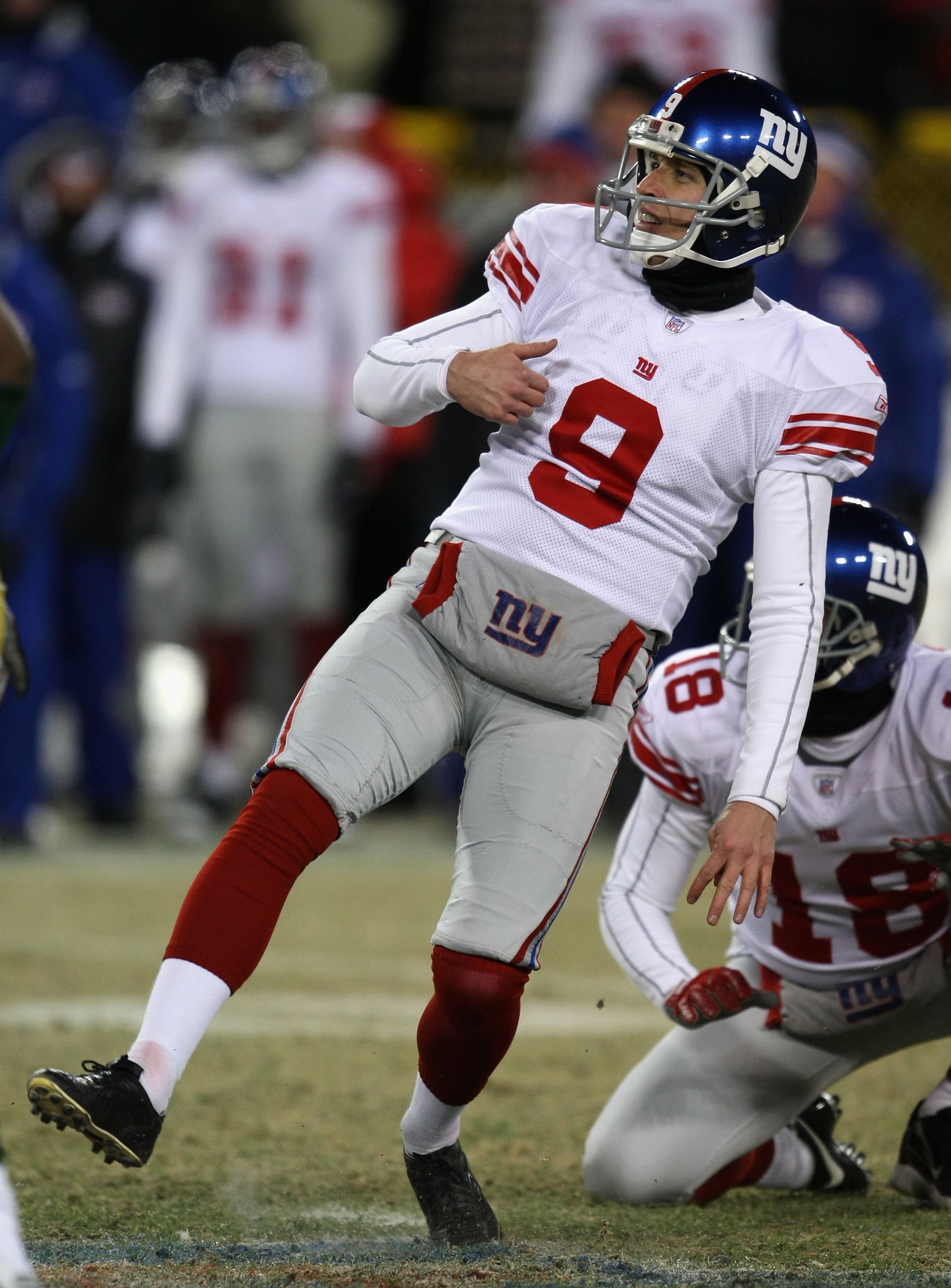 The New York Giants were in Lambeau Field to take on the Green Bay Packers in the NFC Championship.

Eli Manning and the Giants had to win all their games on the road to get to the Super Bowl, and that is exactly what they did, including their 23-20 overtime win against the Packers.

Giants kicker Lawrence Tynes missed a 36-yard field goal in regulation to give the Giants the win, so the game was sent into overtime tied at 20.

Brett Favre and the Packers had the ball in overtime, only to give it back to the Giants after cornerback Corey Webster picked off Favre for perhaps the biggest play of the game.

Tynes redeemed himself by hitting a 47-yard field goal to send the Giants to the Super Bowl, where they beat the 18-0 Patriots, 17-14. 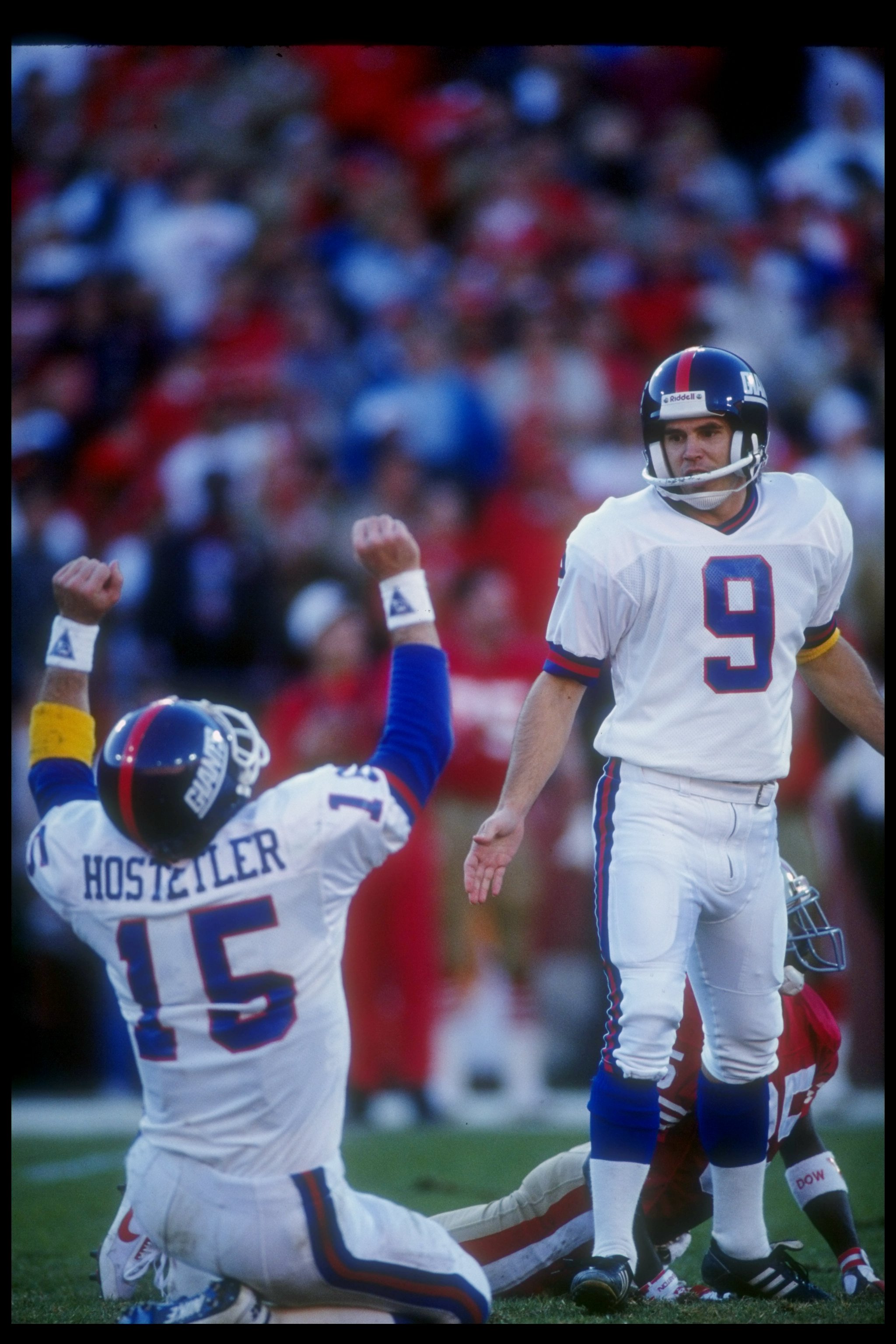 Both the Giants and 49ers began their regular seasons with 10-0 records, but the 49ers were the ones who earned home-field advantage due to a 7-3 Monday night win over the Giants.

In their second meeting, the 49ers were the favorites to win the Super Bowl until Joe Montana was knocked out of the game by Giants defensive end Leonard Marshall.

Giants kicker Matt Bahr hit a 42-yard game winning field goal to give the Giants a 15-13 win and send them to the Super Bowl. 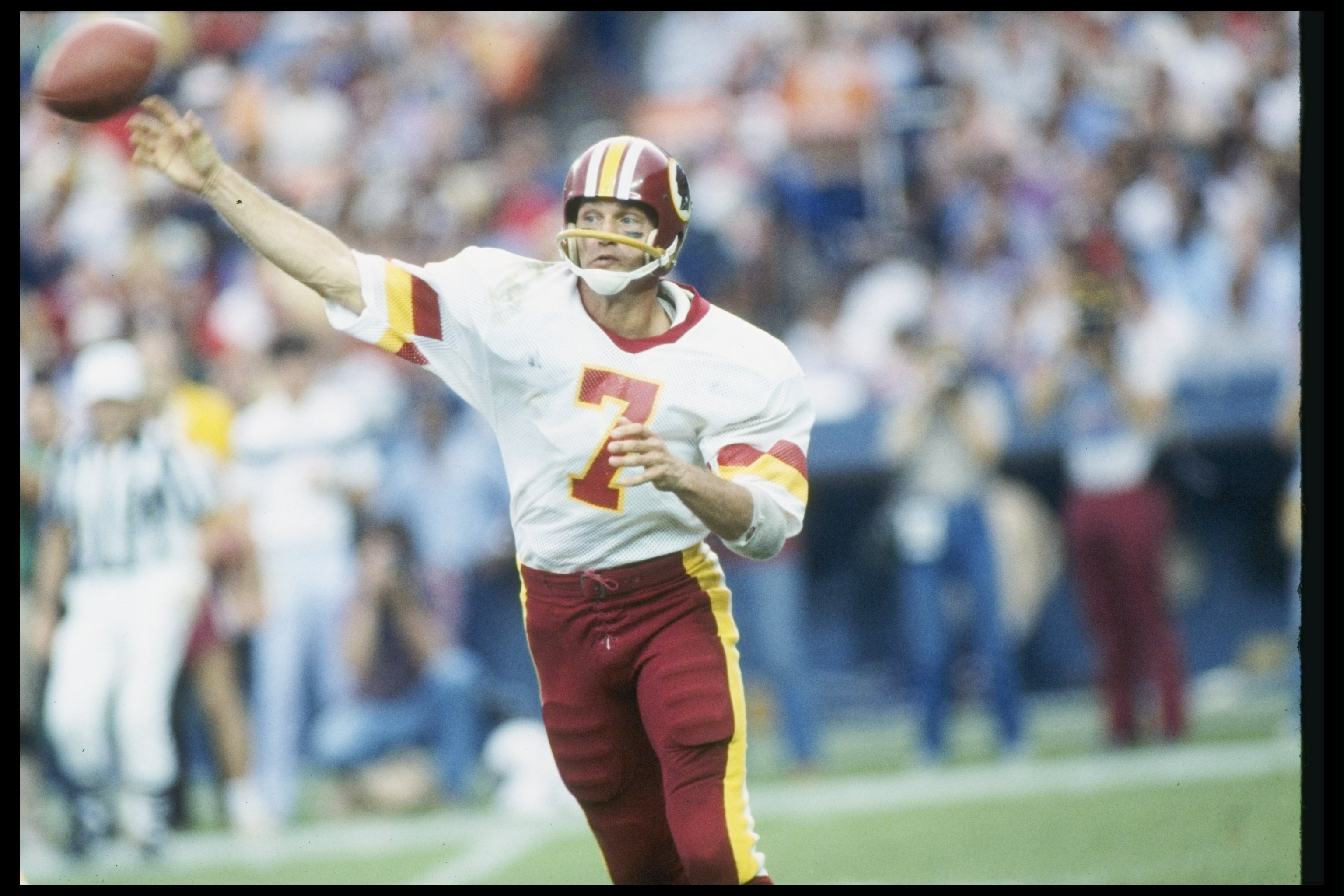 The San Francisco 49ers capitalized on the Washington Redskins' four missed field goals by scoring 21 points in the fourth quarter to tie the game.

After Joe Montana's three touchdown passes to tie the game, the Redskins were left with over six minutes to win the game and get to the Super Bowl.

Redskins kicker Mark Moseley got another opportunity to redeem himself, and he delivered with a 25-yard game-winning field goal to give the Redskins a 24-21 victory.

The field goal was set up after a pass interference call following an incompletion from Joe Theismann. 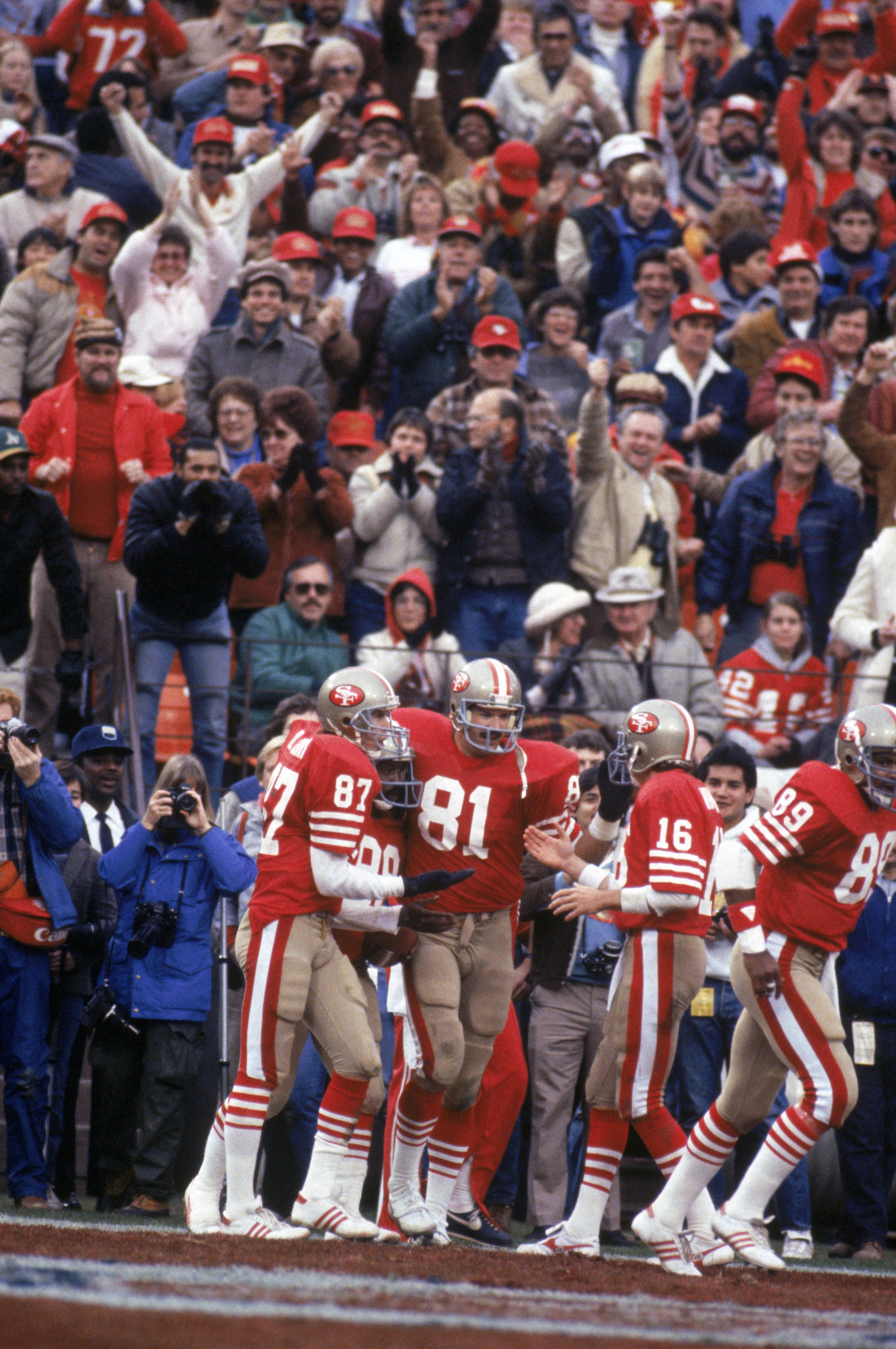 Down 17-14 at halftime, the 49ers took the lead in the third quarter on a Johnny Davis touchdown run.

The Cowboys then cut the lead to 21-20 after a Rafael Septien field goal. After the Cowboys recovered a 49ers fumble, tight end Doug Cosbie caught a touchdown to give the Cowboys a 27-21 lead with just under five minutes left to play in regulation.

The 49ers started their drive on their own 11-yard line and had to march 89 yards down the field to win the game.

From the Cowboys' six-yard line, Joe Montana hit Dwight Clark for a touchdown that we all know as "The Catch."

The Cowboys had time left, but 49ers cornerback Eric Wright made a key tackle to help the Niners win the game 28-27.