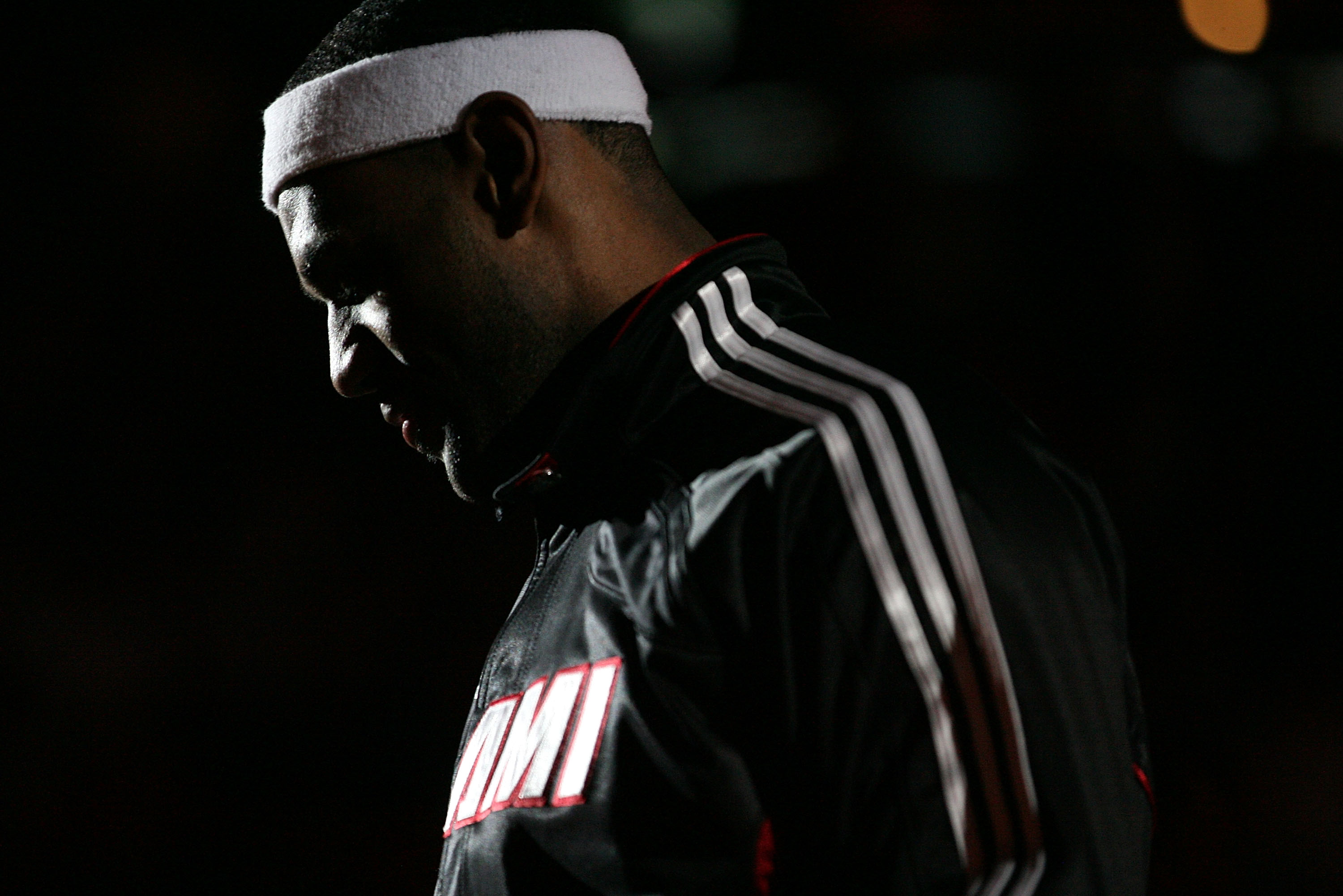 LeBron James can tell you God only gives with one hand. The one the King received put incredible basketball talent into a phenomenal physical specimen.

The one he didn't receive must have had his manners.

If the media didn't exist, James would be the perfect athlete. He'd hit the gym, practice hard, dominate the game, and go to sleep, leaving him with the respect of all. Sadly, he just can't seem to get this whole talking thing down.

Do I hear a sequel? The King's Speech 2?

James has turned into a dial-a-quote: Call him up, and he'll say something worth a spot on every front page. It's hard to imagine a player averaging close to a triple-double being out-shined by his own words, but that's exactly what's happening in South Beach.

As a King, he's addressed some of the most poignant issues facing himself, the NBA, and society at large. But which of his comments has caused the biggest stir? Which will he regret most down the road?

All rise for his highness! 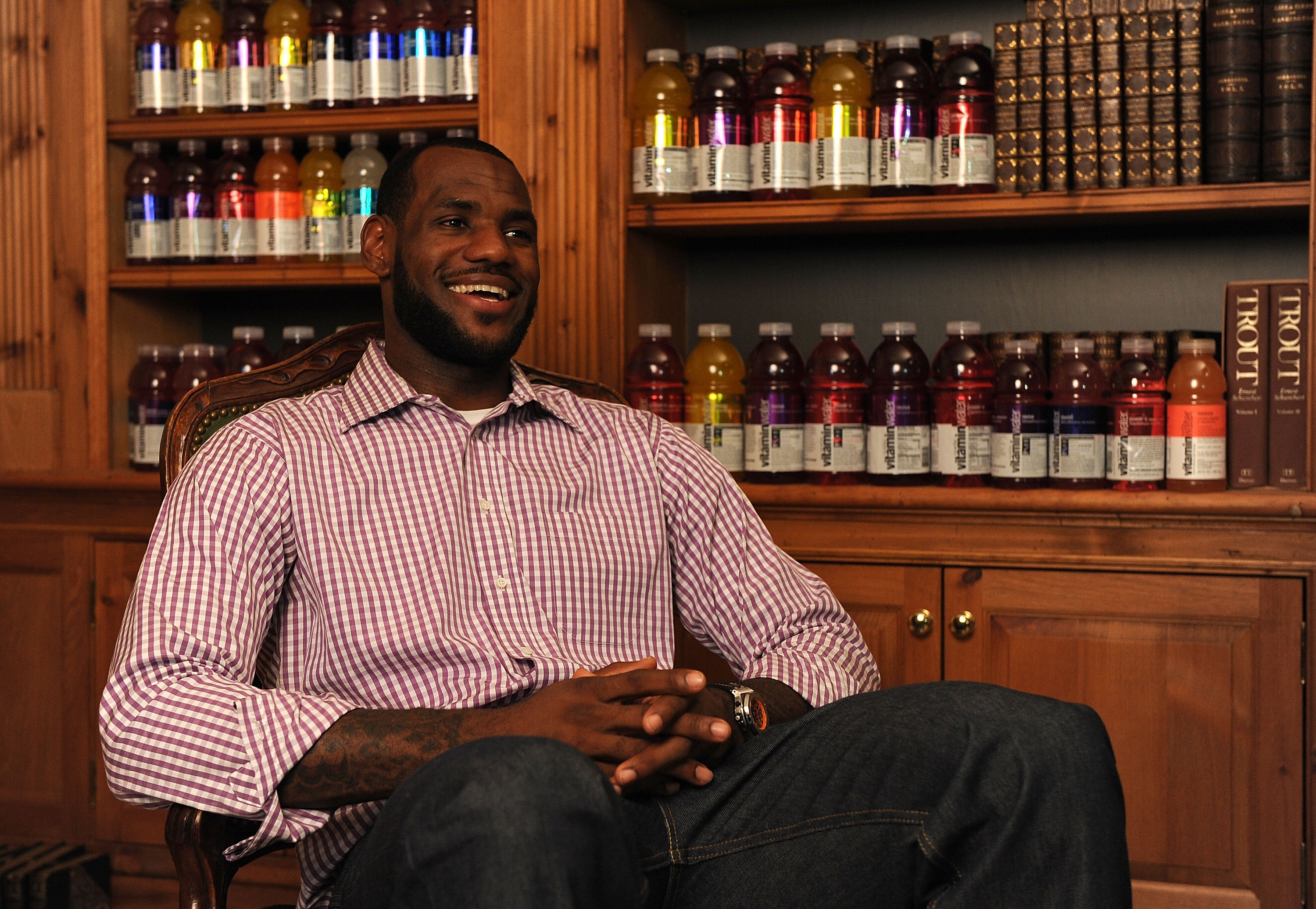 "In this fall — this is very tough — in this fall I am taking my talents to South Beach and play with the Miami Heat."

It's really the quote that started it all. Without these words, Cleveland would still have a semblance of an economy, James wouldn't be booed louder than Michael Vick at a PETA rally, and Chris Bosh would be averaging a double-double in Miami.

Okay, maybe not the last one.

James sat back and told Jim Gray, who apparently works once per year, that King James would move his throne to Miami. Gray, who lobbed softballs at the superstar, needed to ask one more question:

"How did you come up with that wording?"

The last half of the sentence sounds like the beginning of a romance novel. For all the influence his buddies had on this endeavor, it's hard to believe no one said "'Bron, just be polite." 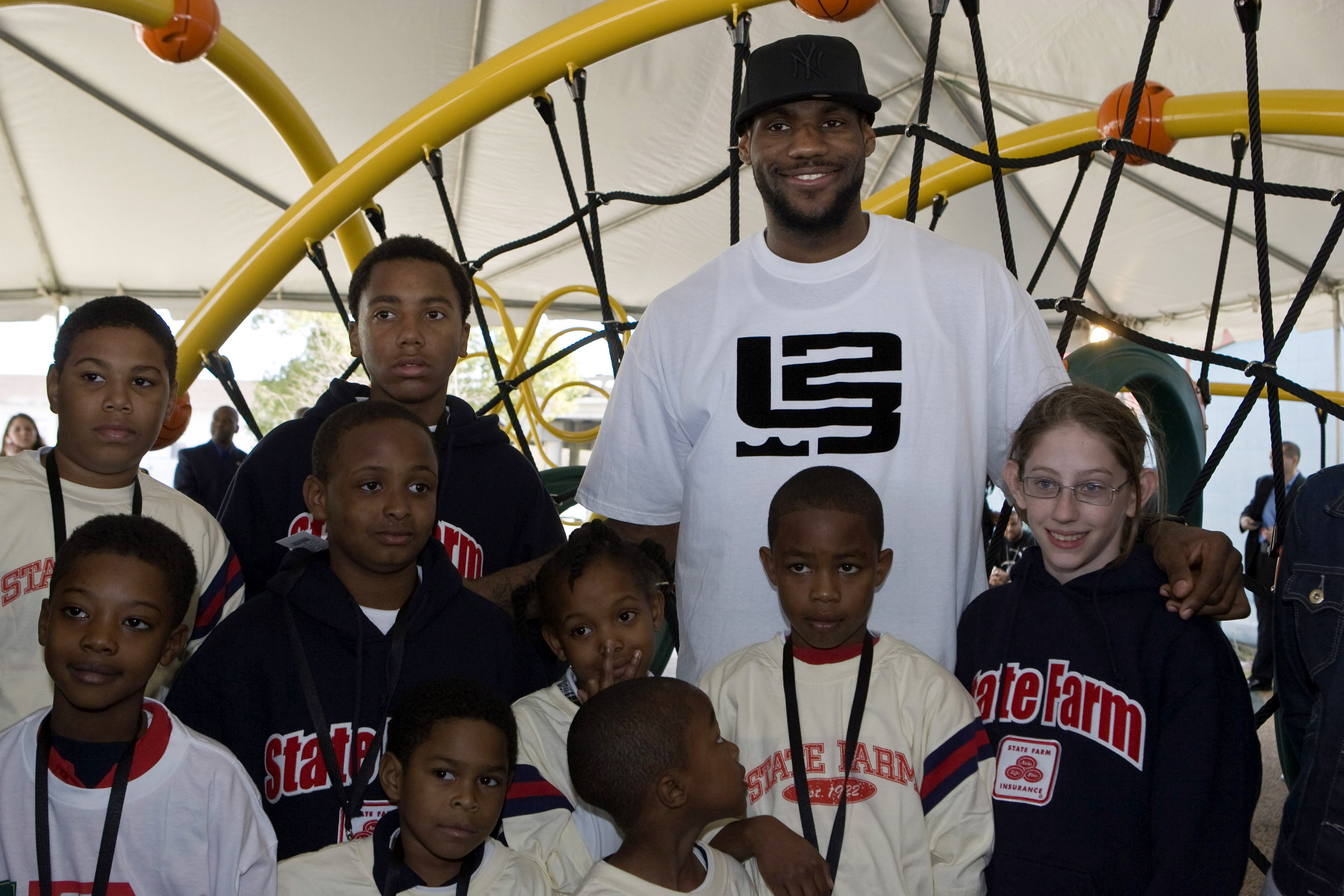 When ESPN aired "The Decision," James made it very clear proceeds from the event would go to the Boys & Girls Clubs of America, which is an incredibly generous move. Donating upwards of $2 million to Clubs in multiple cities probably made some kids' days.

And apparently, it made LeBrons' too.

"This is an unbelievable venture for myself. This is great, also for the kids. The kids are our future..."

Way to once again tarnish President Johnson's initials. Giving money to charity is a selfless act, unless you do it to make yourself look better. The kids' gains seem like such a secondary bonus here, it's like he's just above their level.

Can someone verify the payee is the BGCA and not a stem cell cloning facility? Actually, James knows he can't be duplicated, so don't bother. 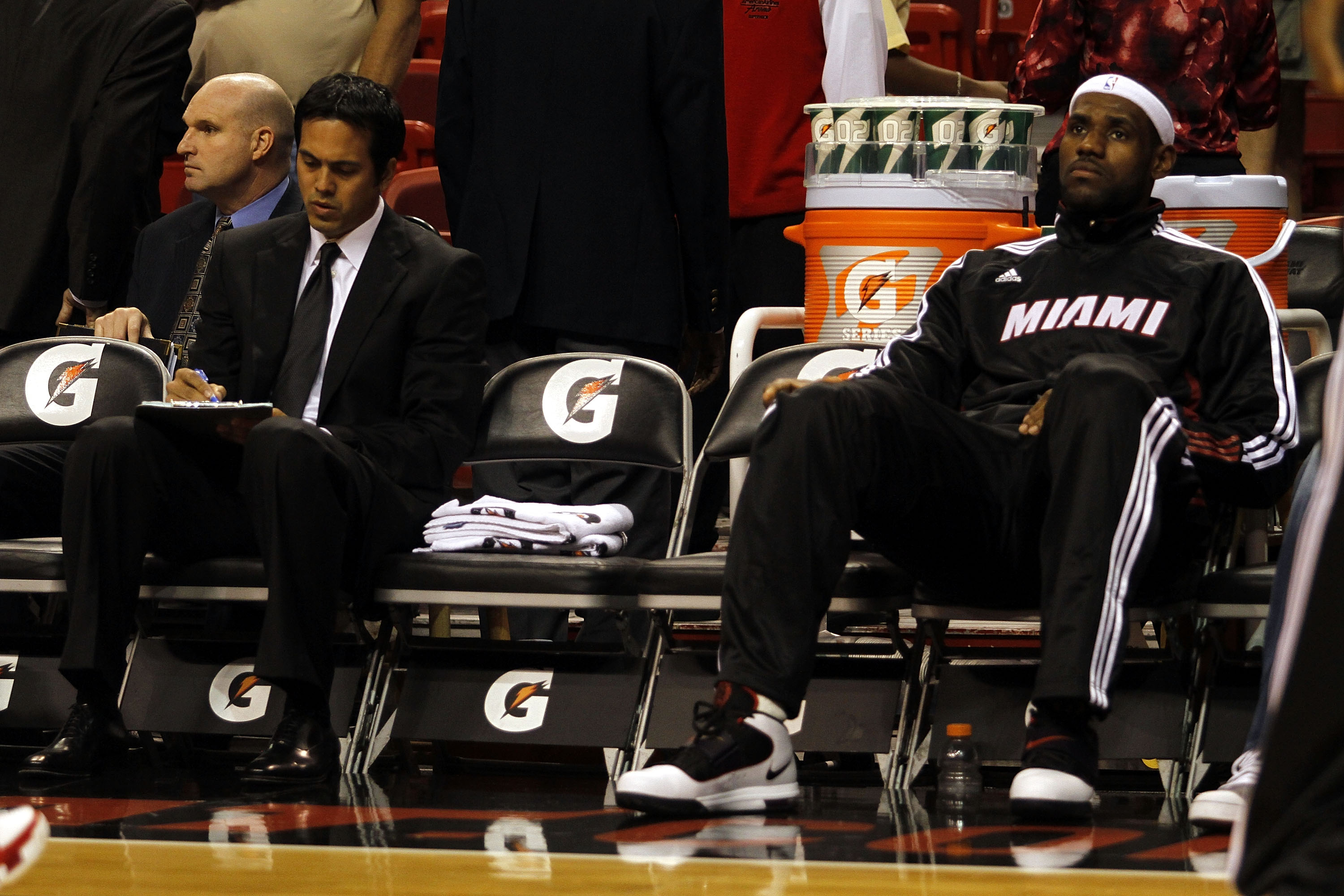 Most coaches dream of having a player like James on their roster. At 6'8", 250 lbs, the King is like nothing the NBA has seen before, and having a skill set to rival the league's greats doesn't hurt either.

When he started this quote, coaches everywhere drooled:

“Ask me to play. I'll play. Ask me to shoot. I'll shoot. Ask me to pass. I'll pass. Ask me to steal, block out, sacrifice, lead, dominate, ANYTHING."

Sounds great, right? A superstar with infinite potential willing to do anything to win, as long as the coach asks...

So much for following the leader. 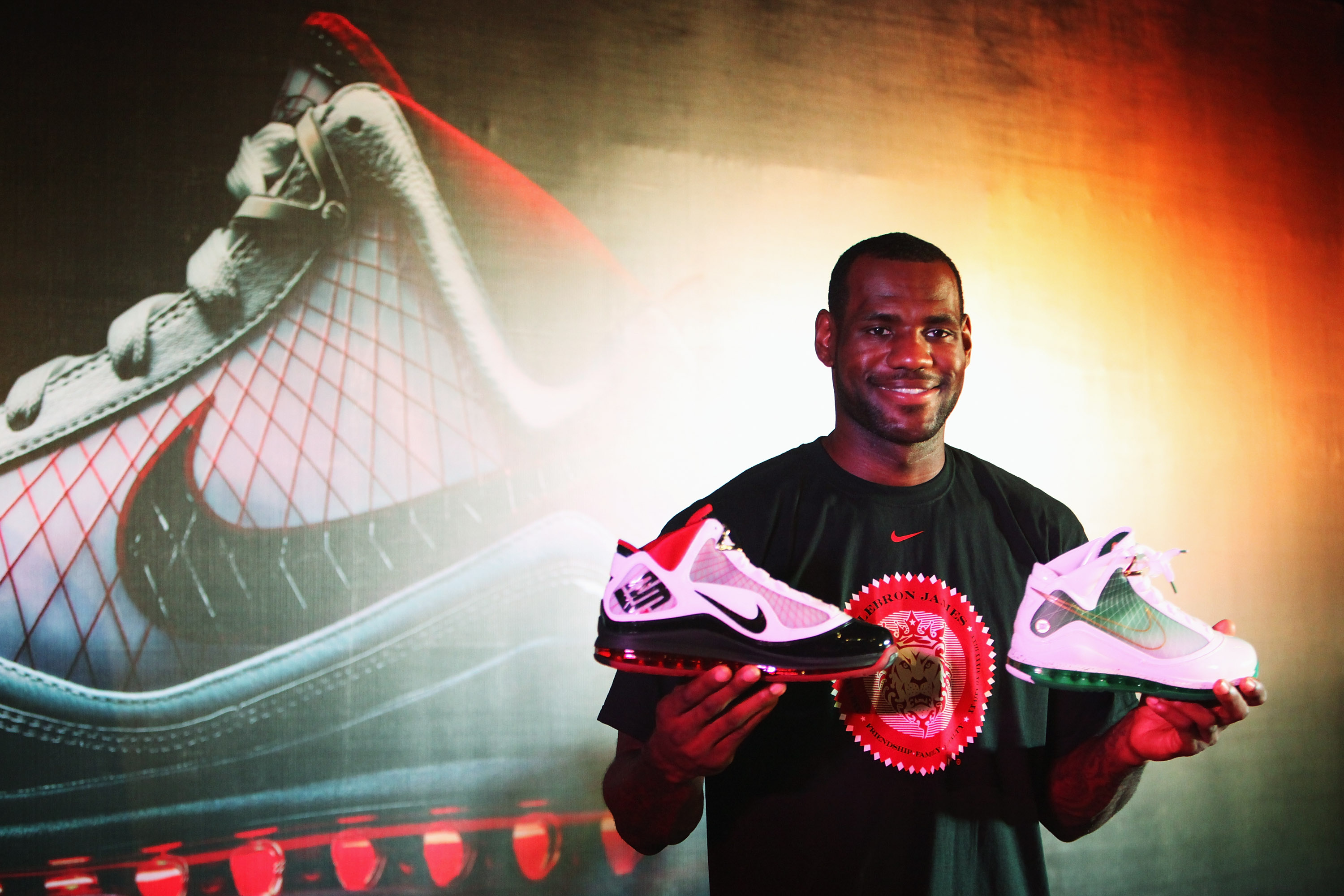 James isn't the only star athlete with a outrageously expensive shoe on the market. According to him, however, it should be the most expensive one for a very simply reason.

When asked before Christmas why his LeBron 8V/2 (which sounds like an electron count) sold for $160, while Kobe Bryant's Zoom Kobe VI sold for $30 less, LeBron made it crystal clear.

"Because it's LeBron's shoe", said James. "It is, it's got my name on it. I take pride in my shoes every year and I've always taken pride in having the best shoe. So they're going to cost a little more if you decide to wear them.''

First, talking in the third person makes you as respectable as Joe Horn. And I don't see too many Joe Horn fan clubs popping up anywhere to support Joe Horn.

Second, does James have any creative or design control over the shoe? Yes, it has to be comfortable for him, but he isn't dropping more dollars on a bunch of lab coats to create the Superman of shoes.

Otherwise, he'd have made one, and stopped. 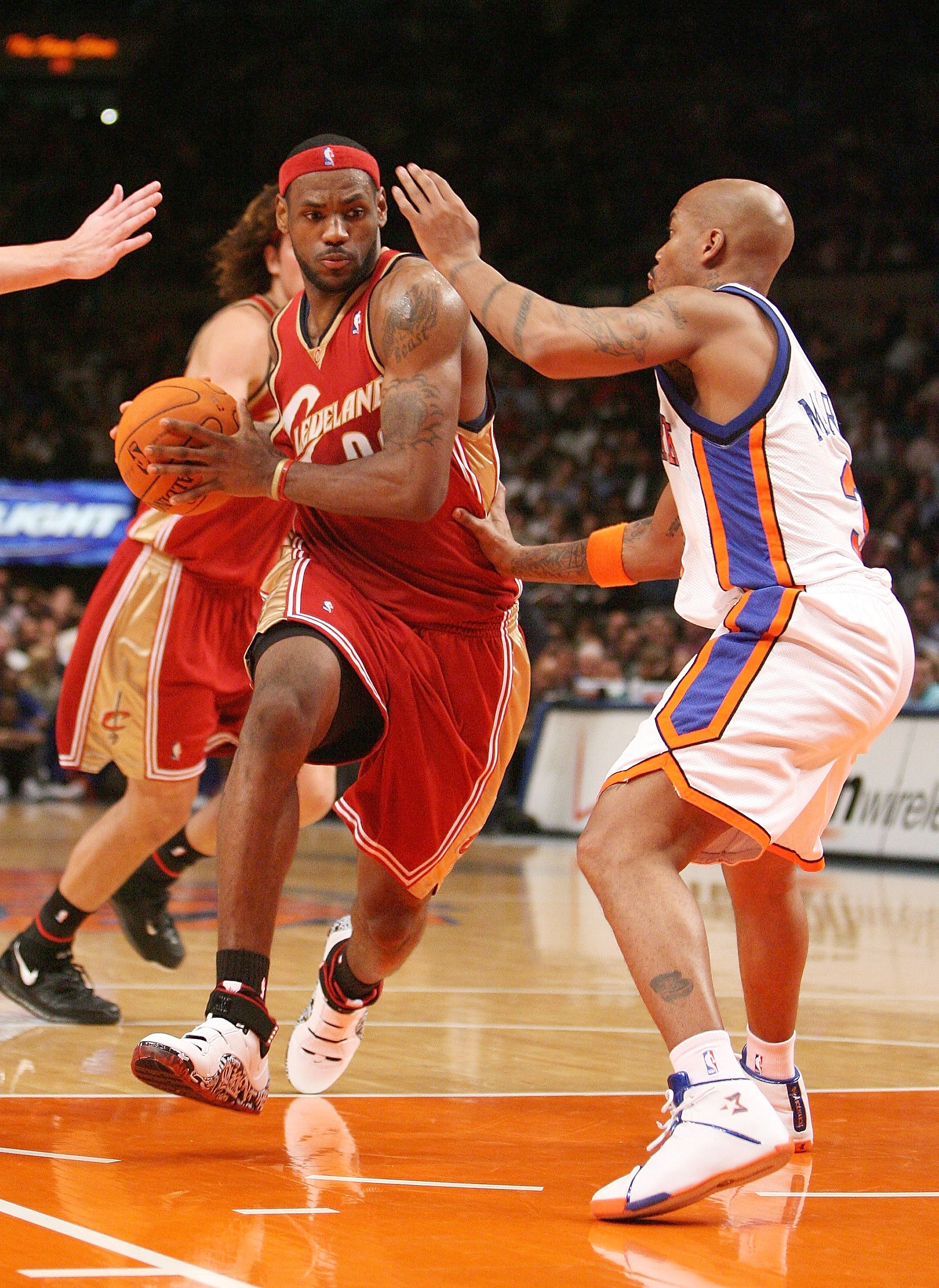 James has stated before that he wants to be a billionaire, allowing his future generations to have zero financial hardship. While that's a very noble goal of him, he apparently can't relate much to the lower classes outside of his words.

Just look at what 'Bron said before a 2007 matchup with the Knicks regarding Stephon Marbury's $15 sneakers for kids.

"Growing up in the inner city, at times families can't afford $120 shoes. It's definitely smart on their part.''

Seems reasonable. So would he wear them to promote them for the less fortunate?

LeBron: "No, I don't think so. Me being with Nike, we hold our standards high."

Ah, sounds more like him. Don't bother him with any shoes without diamond studded aglets. Fortunately, Marbury had a witty comeback to overshadow the faux-lanthropist. 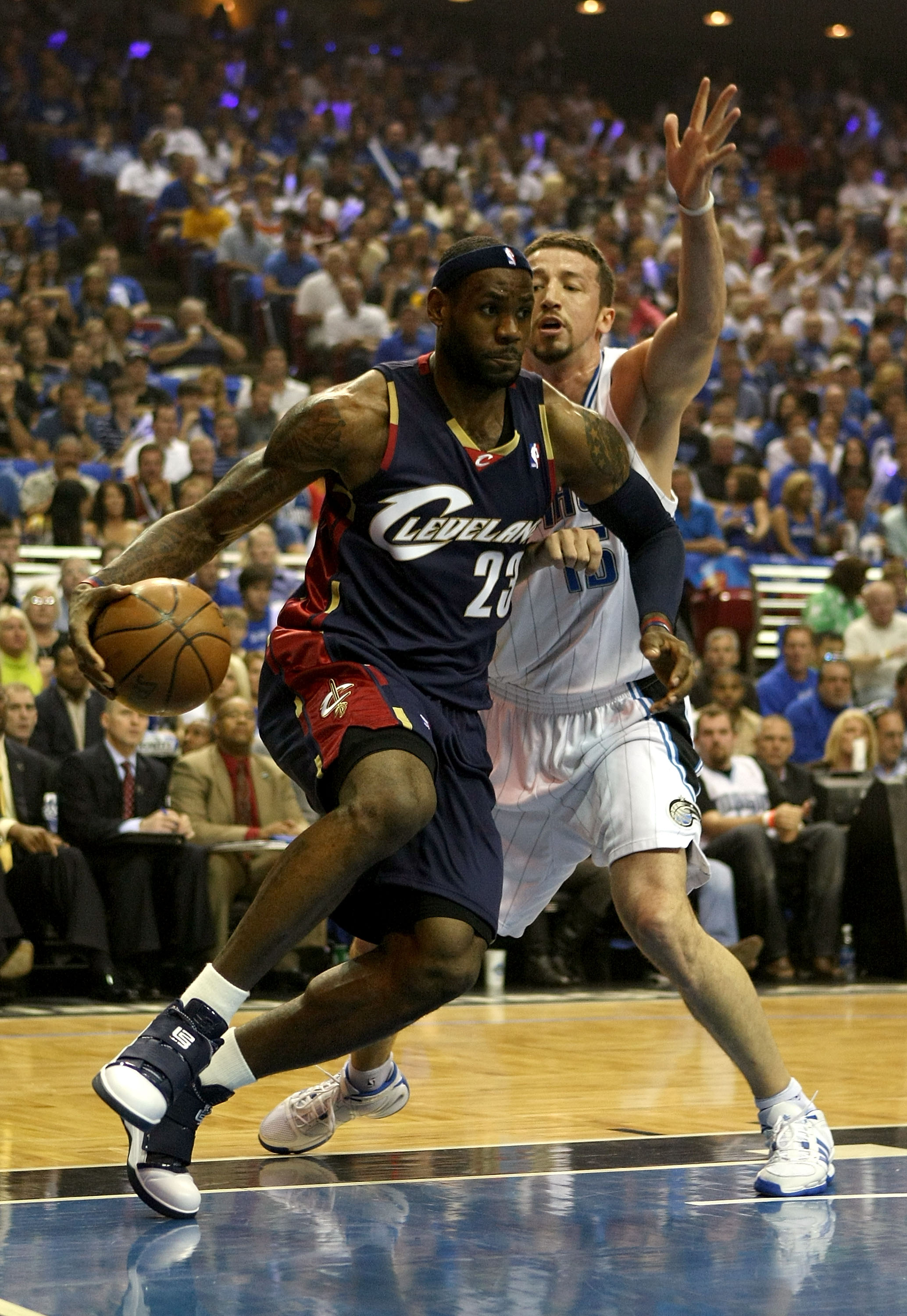 James understands basketball is a team sport. It takes five guys who work together for a common goal every night to have success in the NBA.

And what five guys work better together than five of the same guy?

"I'm only one guy," James said during the 2009 Eastern Conference Finals. "I took Hedo (Turkoglu) in the first game and Rashard (Lewis) hit the winning shot. I took Rashard in the second game and Hedo hit the shot. If I could clone myself, we'd be all right. But I can't."

Of course, anything short of five LeBrons is not acceptable. Got to give James credit though, it's hard to have one thought that simultaneously compliments yourself, insults your teammates and opposition, and promotes cloning.

Seriously, give it a try. It's not easy. If you are able to pull it off, you can call yourself a "winner" too. 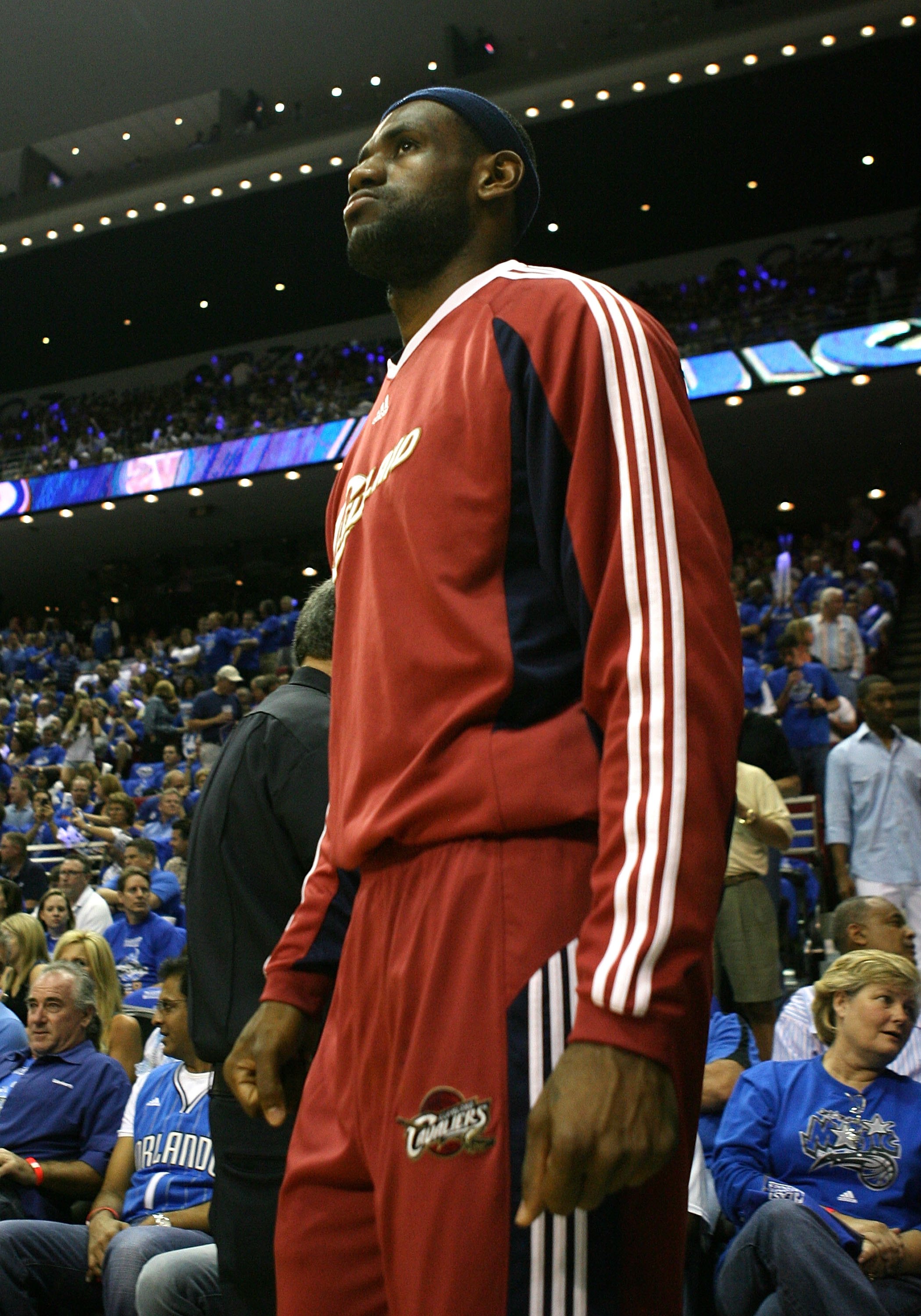 The 2009 Eastern Conference Finals featured what most people saw as an upset: The Orlando Magic taking down the top seeded Cleveland Cavaliers for a trip to the NBA Finals.

"Taking down" means defeating, for those who are unaware. That includes James.

"I’m a winner. I’m a competitor. That’s what I do. It doesn’t make sense for me to go over and shake somebody’s hand."

Hmmm...normally winners have some sort of ring or championship trophy.

Regardless, for a guy who claims to like being a role model, he really did sportsmanship a favor. No one pays attention to the lessons mom and pop taught you until someone newsworthy completely blows them off, as James did by leaving the court with shaking the Magic players' hands.

But hey, he's a winner. So what's respect got to do with it? 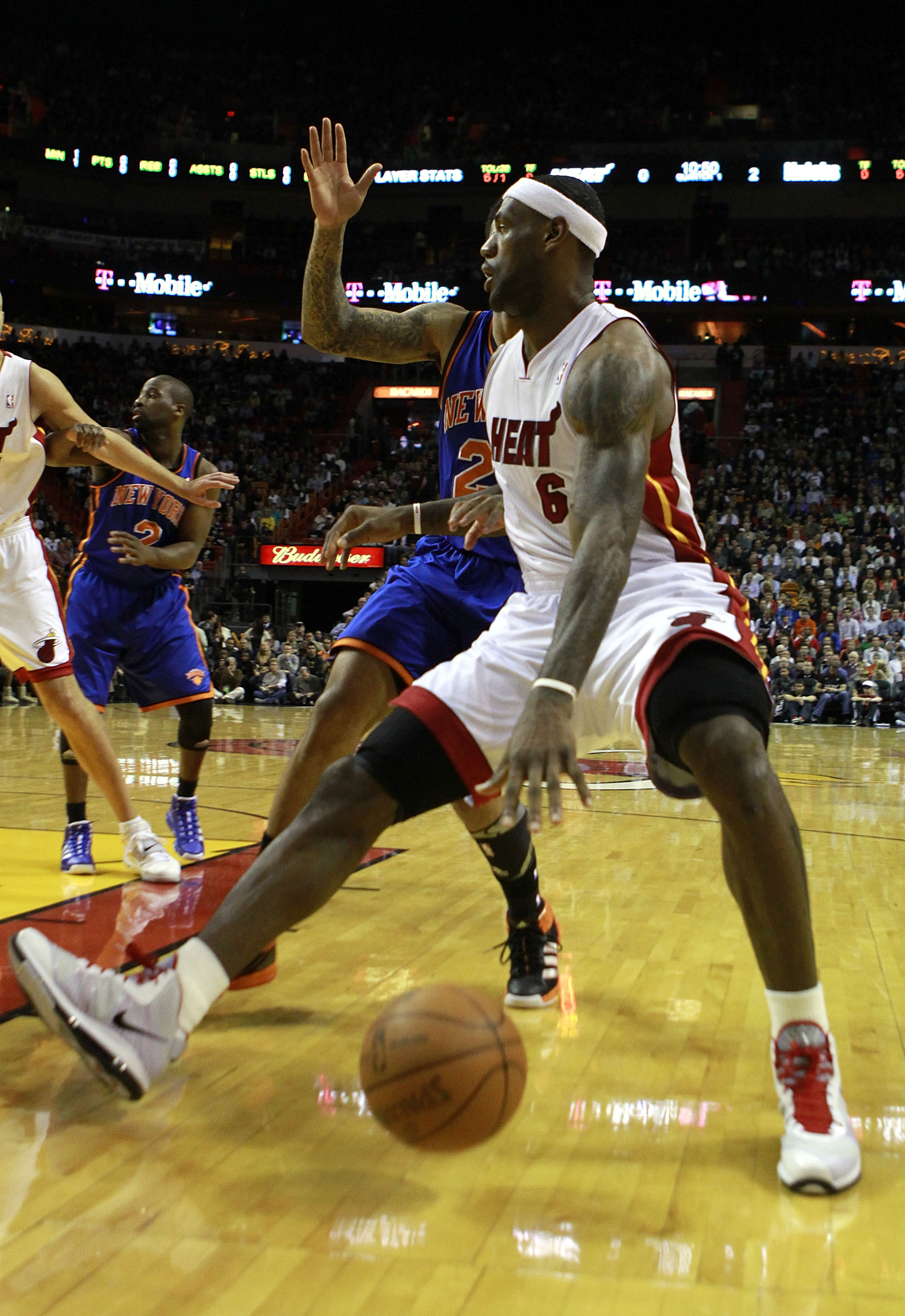 "Imagine if you could take Kevin Love off Minnesota and add him to another team and you shrink the [league]," James said last month. "Looking at some of the teams that aren't that great, you take Brook Lopez or you take Devin Harris off these teams that aren't that good right now and you add him to a team that could be really good. Not saying let's take New Jersey and let's take Minnesota out of the league. But hey, you guys are not stupid, I'm not stupid, it would be great for the league."

No, he doesn't want to remove the Nets or Timberwolves, but he sure implies it heavily. How else does one shrink the league? Replace David Stern with Rick Moranis?

Sadly, it only gets worse, as LeBron backpedals on contraction faster than a Lane Kiffin coaching commitment.

"That's crazy, because I had no idea what the word 'contraction' meant before I saw it on the Internet...I never even mentioned that. That word never even came out of my mouth. I was just saying how the league was back in the '80s and how it could be good again. I never said, 'Let's take some of the teams out.' "

Literally, James wins. He never said "Let's contract." In every other regard, however, he loses the battle. Maybe the league could be good again if players knew seventh grade level vocabulary. 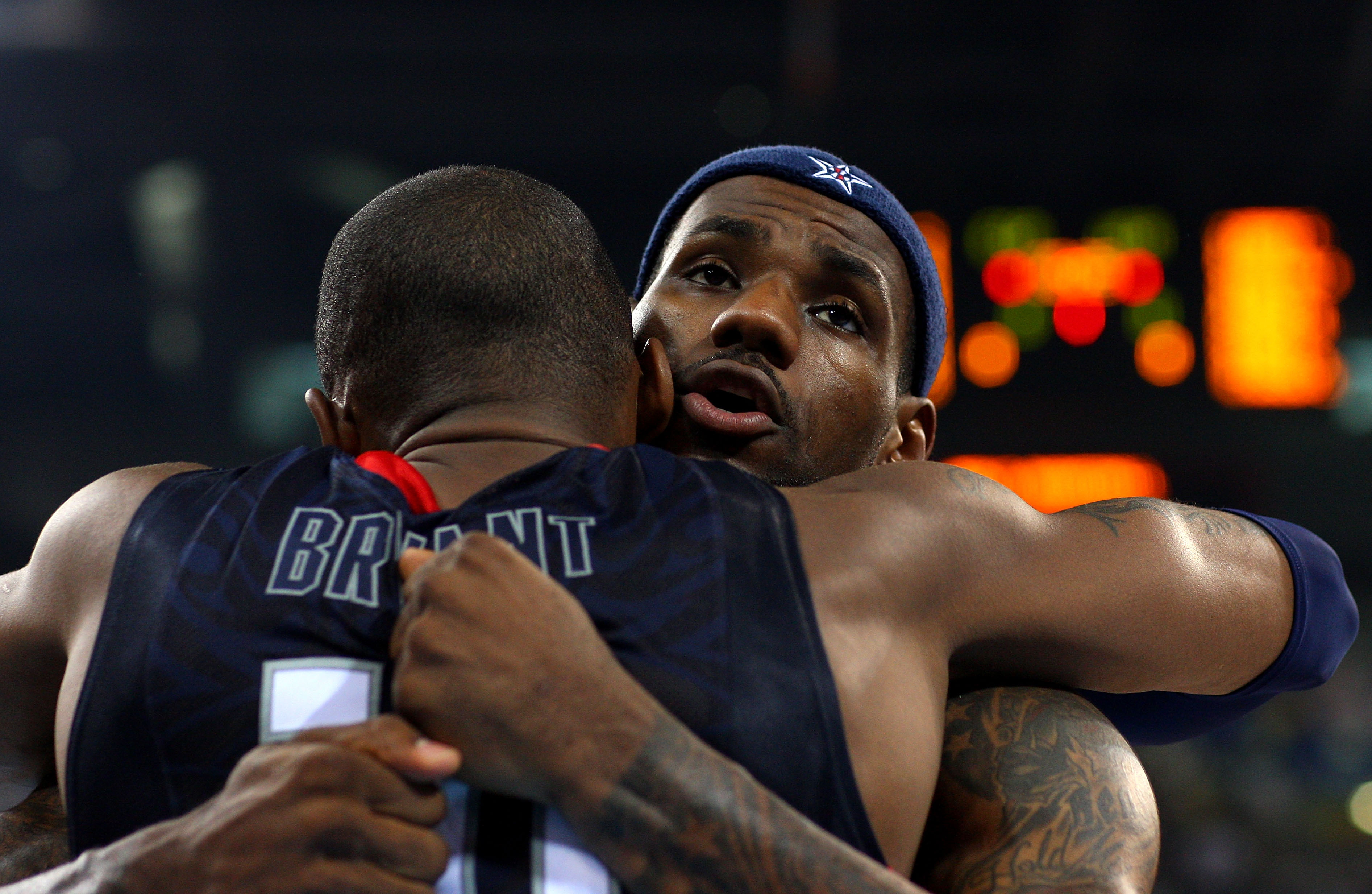 Despite his O-face here, LeBron James doesn't seem to get much pleasure from other men. His humility makes it so the only person that can make him happy is LeBron James.

Professionally, it's the exact same thing.

“We’re like family and you take showers with each other,” James said in 2007. “We’re on the bus together and we talk about a lot of things and if you’re not trustworthy, like admitting you’re gay, you can’t be trusted. It’s a trust factor.”

Even if his point was that he would prefer his teammates not keep secrets from him, this quote sounds like Glenn Beck burning a rainbow flag. Gay athletes often can't come out because the strong religious views of many athletes could cause tension that would negatively affect the team and themselves.

James needs to work on word choice, or else the Miami Gay Pride Parade might trade in their feather boas for pitchforks. 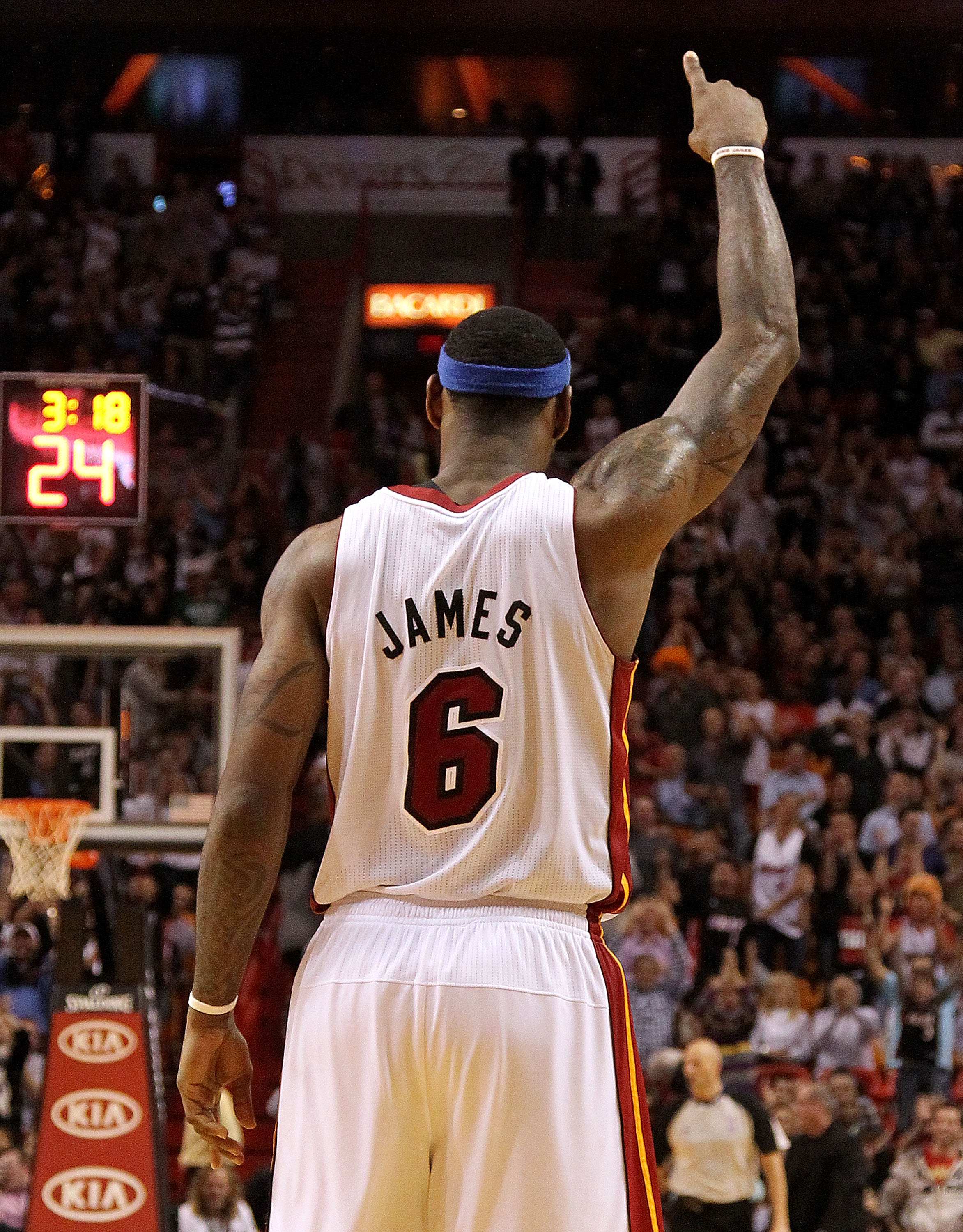 Assuming he's not referring to Mayo or Da Juiceman, this may be one of the more ridiculous comments ever in sports. Yes, Simpson is one of the great running backs in NFL, but did James have to pick the one athlete known more for murder than sports?

What about, "I'm the next Walter Payton"? Much sweeter.

Come to think of it though, the quote makes a lot of sense. Simpson was charged with killing people close to him, and knowing the fanatics in Cleveland, LeBron essentially did the same thing.

Now, if he really wants to match the ex-USC Trojan, he should write a book:

If I Did it: Confessions of a Cavalier