The Top 15 NASCAR Videogames of All Time 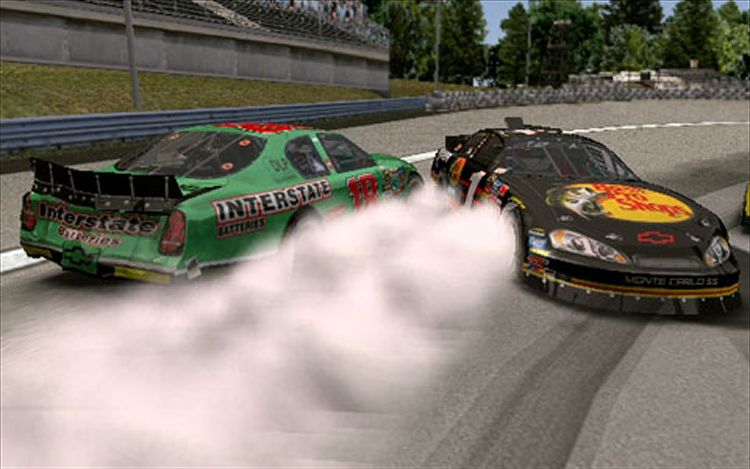 It's Christmas, meaning millions of people are giving each other gifts ranging from the useless to the wonderful.

For me, Christmas always used to mean a new NASCAR video game. From 1998, when I got my first PlayStation and EA's NASCAR 99, all the way to NASCAR 09 on my then-outdated PlayStation 2, there was nary a game I missed. I played almost all of them at least once, even the Papyrus computer games and Hasbro's limited output.

But EA started to go downhill on a major scale with the release of NASCAR '07, and the fact that they held an exclusive license (since expired) didn't inspire them to keep the quality up. Now, NASCAR is relying on the old open-license technique, allowing any developer to create a game, hoping that it will lead to higher-quality product.

Most of the following games come from the heyday of NASCAR video games, between about 1999 and 2005. The rest are either out right now or coming soon, but since they've had less time to stack up against the classics, they come first (with one notable exception). 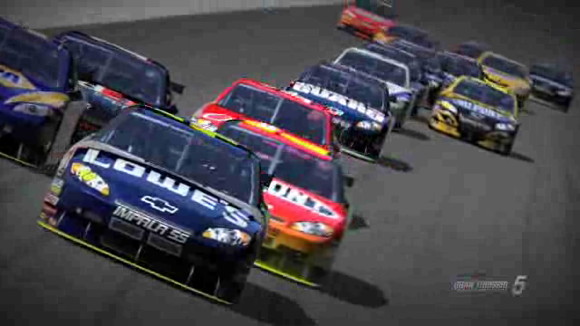 GT5 merits inclusion on this list for the sheer amazingness of the game itself, but as far as a pure NASCAR game goes, it’s nothing special. There are only two tracks–Daytona and Indianapolis and about 11 cars, a far cry from what most other games offer. But if you ever want to put Jeff Gordon head-to-head with Jimmie Johnson on the Circuit de la Sarthe, well, here’s your game. 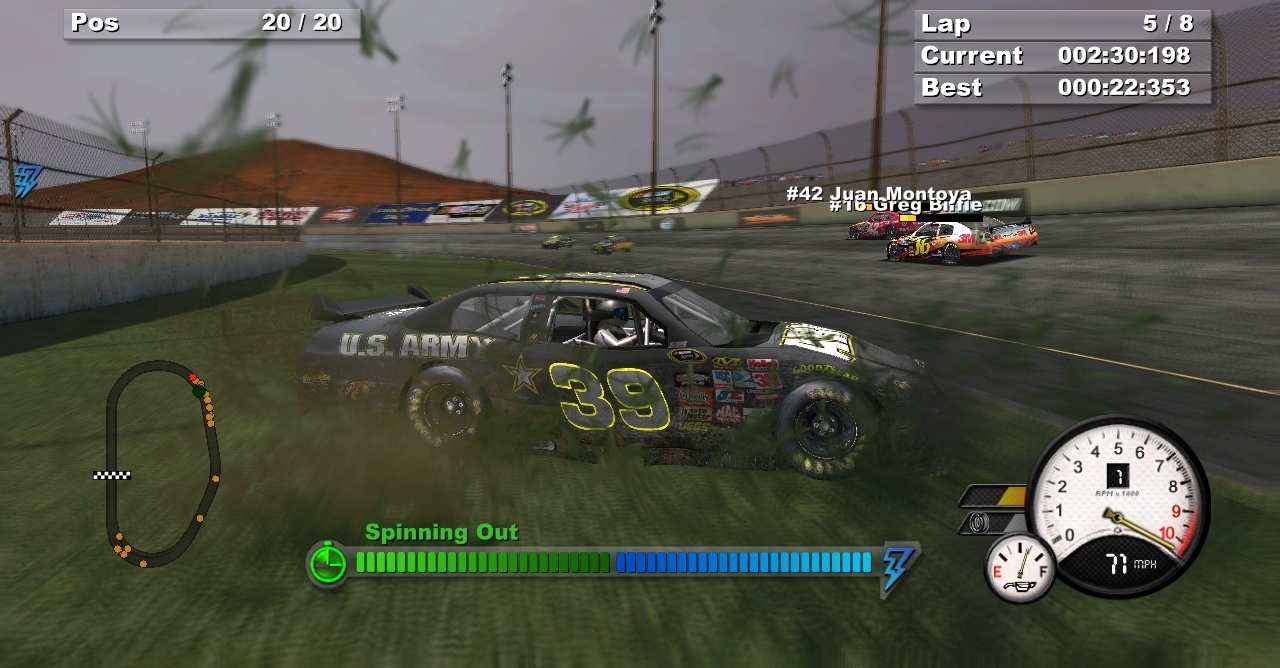 Some of you might think Paramount and Viacom absurd for releasing a game based on a 20-year-old movie in 2010. You might just be right.

The game has experienced some delays in release that have prevented gamers from getting their hands on it, but the concept of getting to race as or against such legends of the film as Cole Trickle, Russ Wheeler, and Rowdy Burns still has some pull for a few of us. 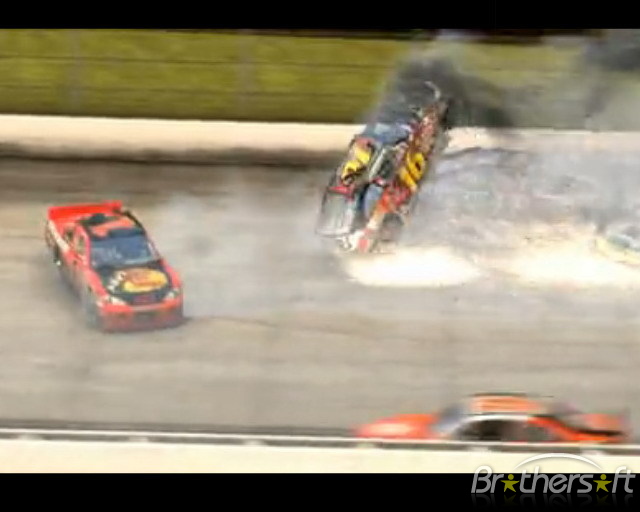 We can’t really rank this video game accurately when it hasn’t yet come out, but this is Activision’s first foray into the NASCAR market. Sports gamers likely know the brand best for the Tony Hawk skateboarding games, but Activision has some NASCAR experience–they were, in fact, briefly a primary sponsor for Mark Martin in the mid-1980s. 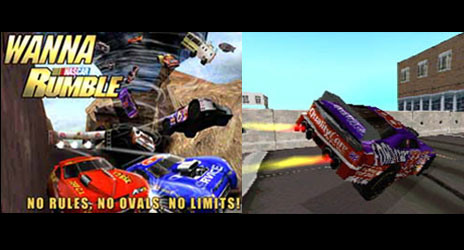 This one was always one of my personal favorites as a kid. Think NASCAR-meets-Mario-Kart, a concept EA later embraced with NASCAR Kart Racing for the Wii. But NASCAR Rumble allowed you to trick out your cars, and even featured six Craftsman Trucks to go along with its Winston Cup teams and hidden vehicles.

Most of the tracks were fantasy tracks, ranging from open highways to a race around a large fountain, and usually they featured shortcuts. 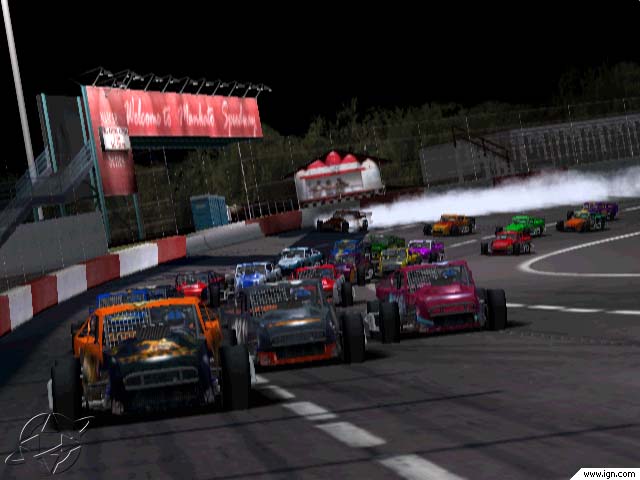 Dirt to Daytona was the first game to really embrace the idea of moving up from the bottom tiers of the sport, the dirt tracks, to the highest level. It was Hasbro Interactive’s third and final NASCAR game, and an impressive entry for its depth, although the game play felt a little less put together than EA’s game did. 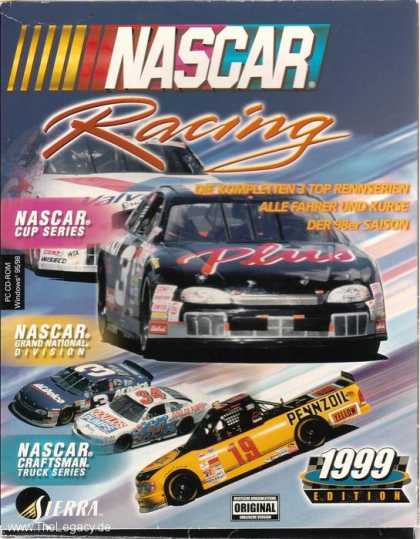 Released in 1999, these games were the standard excellent Papyrus fare. But 1999 Edition was one of the first games to fully embrace the concept of adding Busch Series and Craftsman Truck vehicles, and allowed users to race in fields of up to 39. 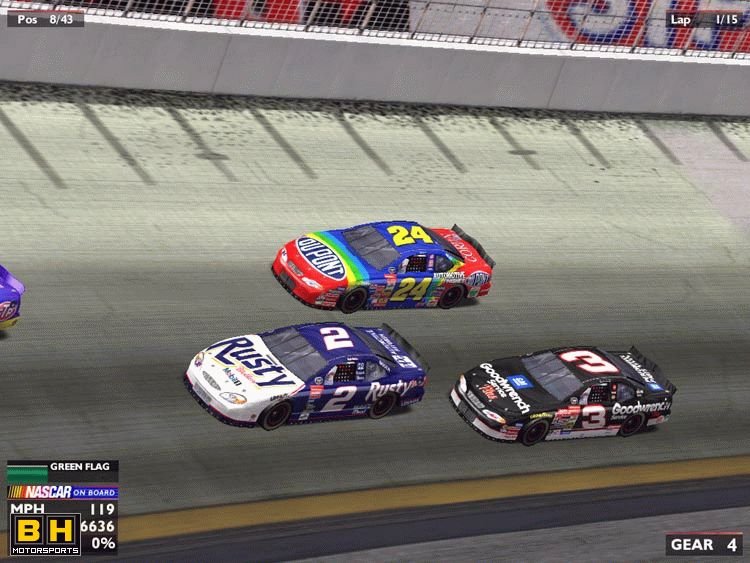 EA hadn’t really seen any competition in console gaming up to this point—only Papyrus was going up against them on the PC, and everybody knew that the Papyrus games were designed more for hardcore simulation than EA’s games were. But then, Hasbro stepped up with this baby, and an all-out war began. 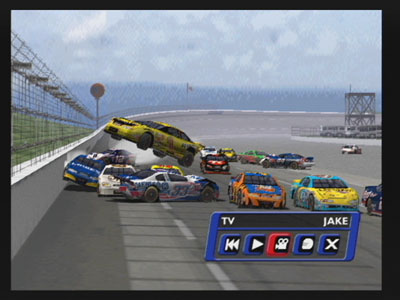 Hasbro stepped up its game for the PlayStation 2 with the second game in its NASCAR Heat series. Competition with EA was at an all-time high, much as EA was competing with Sega Sports in football. And while both competitors lost out in those respective instances, their offerings would have been groundbreaking in any other situation. 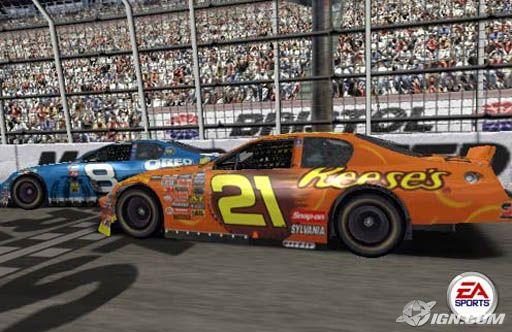 For the first time, EA added lower-tier series to their games, adding Featherlite Modifieds and Craftsman Trucks to the stock cars. The Busch Series vehicles were also separated from those in the NEXTEL Cup Series, giving the player four ranks to progress through, much like in Dirt to Daytona. The addition of a story mode and production car races–through one of which the user earns a Modified ride, by beating Ryan Newman–were pretty cool as well. 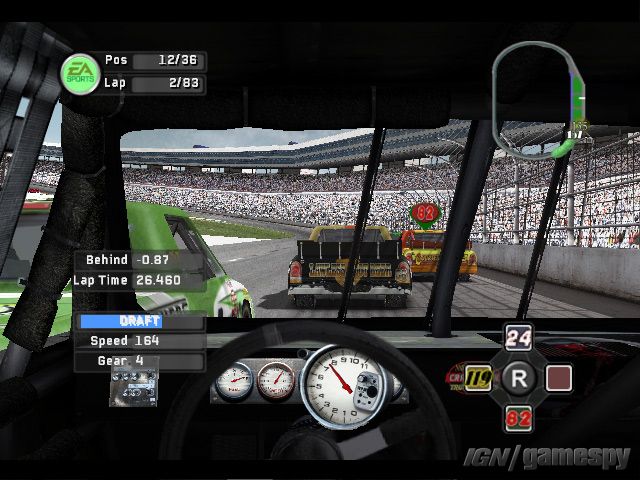 EA was on a roll with almost all of their video game offerings around this time, developing innovative new features for each. For NASCAR, they introduced the ability to radio your teammate for help, ranging from asking him to block for you to being able to switch user control to his car. Unfortunately EA eliminated the car swap for NASCAR '07 and the series was never the same afterwards. 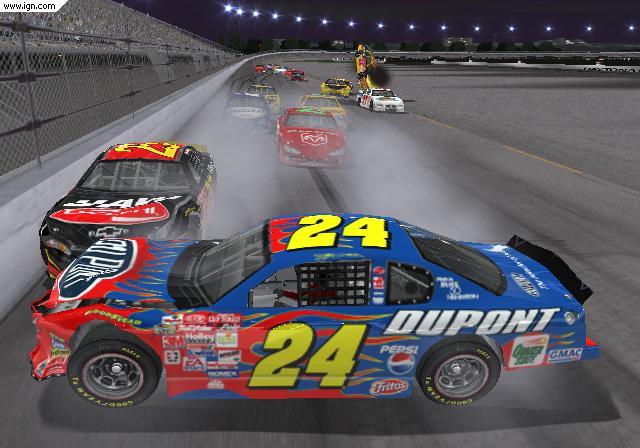 The best of EA’s offerings by far, only because it represented a quantum leap forward for the series. Obviously threatened by Hasbro’s new NASCAR Heat series, and able to add more depth to the game on the then-current generation of console gaming systems, EA jumped from 16-car fields to 43, added a robust career mode, and finally licensed the entire NASCAR schedule. 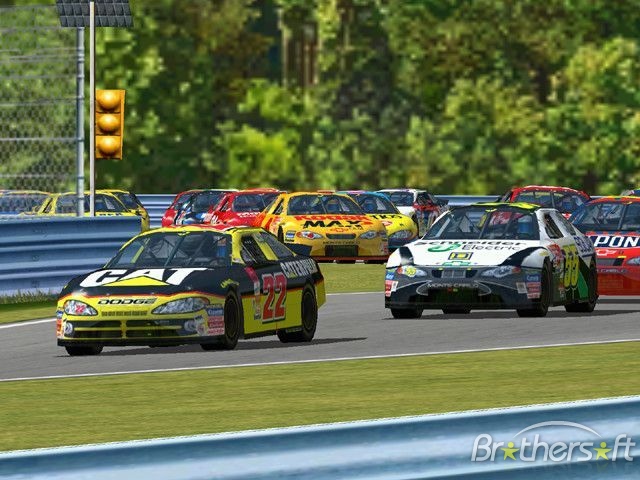 Massive improvement in car models punctuated Papyrus’ fifth and penultimate PC game. The game also included a fictional track, the Coca-Cola Superspeedway, which was basically Daytona and Talladega combined on steroids. Cars were able to reach speeds of 250–at least–and the accidents that users could create soon popped up on YouTube. 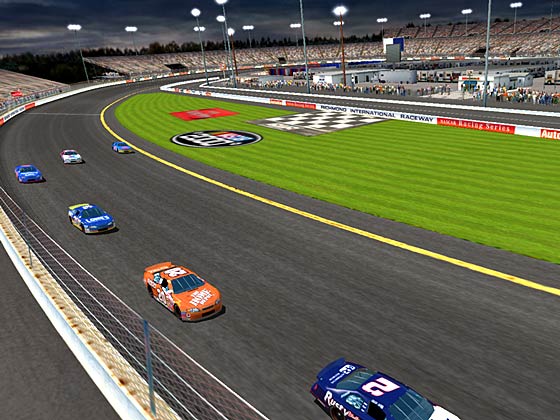 NR4 was the real groundbreaker in the Papyrus series of games–there was a bigger leap from NR3 to this than NR4 to 2002. Cars were able to flip for the first time, the resolution of the game finally jumped to 24k color instead of 256, and for the first time, a full 43-car field appeared in the game–just edging out EA’s first success with that to the market by a few months. 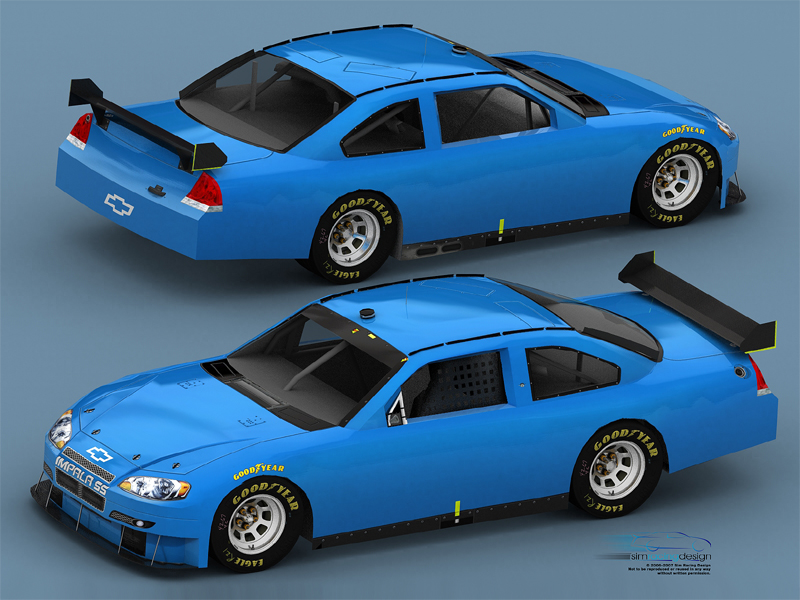 There’s a reason why gamers are releasing modifications for this one to this day, like the Car of Tomorrow template showcased above. By far the most thorough of Papyrus’ critically acclaimed series of games for the PC, it represented the end of an era; not long after its release, NASCAR followed the lead of other major sports like the NFL and MLB and sold exclusive game production rights to EA. In the long run, that proved to be a mistake.

The biggest and baddest out there right now doesn't even need to feature officially licensed vehicles to make it cool. iRacing is primarily designed for online competition. NASCAR even sanctions an official iRacing series, and drivers from the top down, from Dale Earnhardt Jr. to Kyle Krisiloff, engage in the occasional iRace.

Even more impressive is the fact that iRacing keeps up such production standards for many different classes of cars, adding everything from trucks to sports cars to IndyCars.

The game actually retains a lot of code from NR2003, as many former Papyrus developers worked on the game. John Henry, best known as the owner of the Boston Red Sox and part-owner of Roush Fenway Racing, heads the company, which has even found its way onto the real NASCARs of Marcos Ambrose and Todd Bodine.