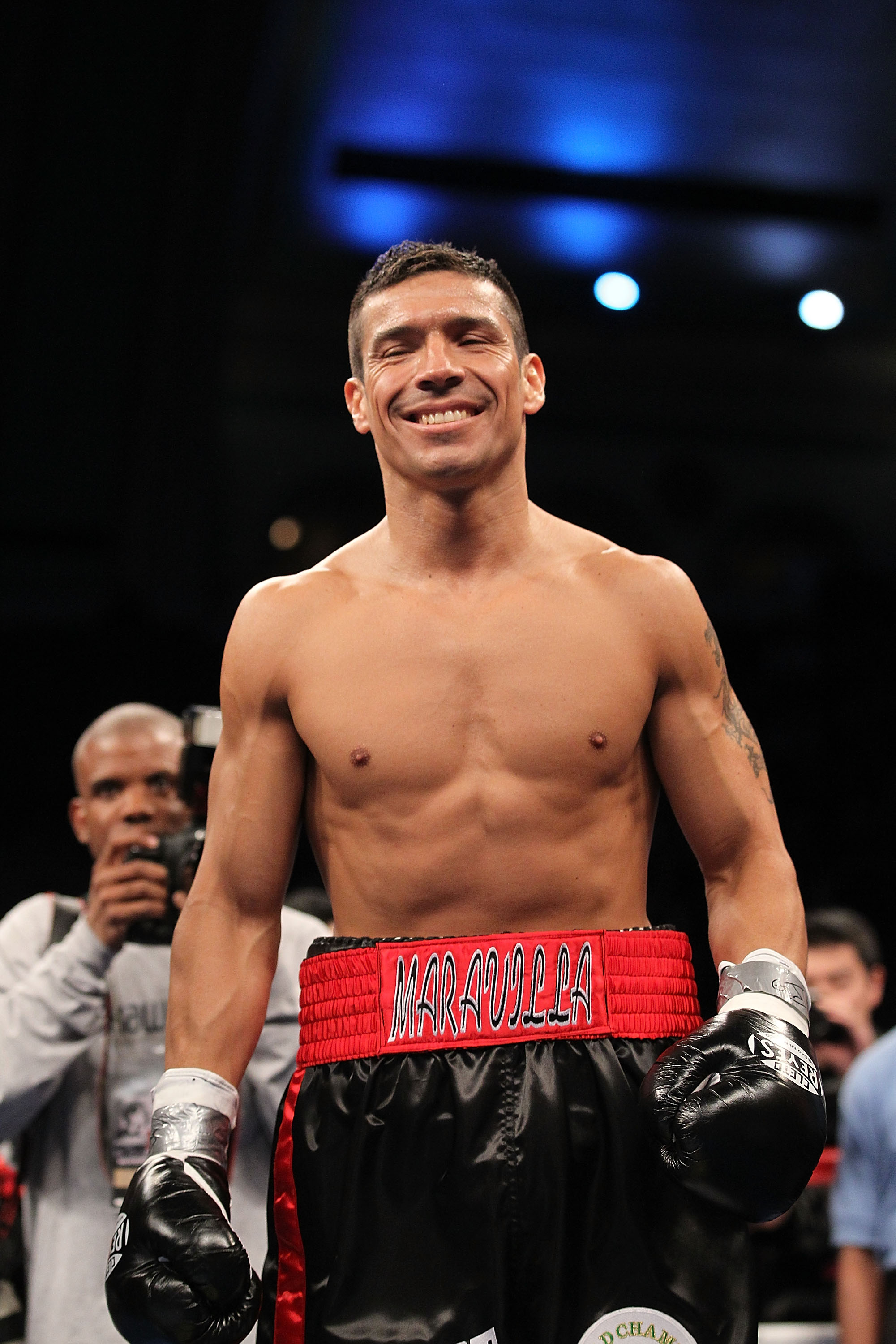 Early on, 2010 was labeled a "down year for boxing."  Sixth months in, as a Pacquiao-Mayweather fight failed to materialize, ring observers were still declaring that, and forecasting the demise of the sport.

But suddenly, things started to turn around.  Big fights were signed, big upsets—such as Jean Pascal's win over Chad Dawson—started happening, and recently, we saw perhaps the most action-packed November in the history of the sport, and quality fights planned well into the new year.

Just to name a few.

As we prepare for a few more big fights to close the books on 2010, we're realizing that it actually became quite an exciting year for boxing, and there is a tight race for fighter of the year, with no runaway favorite.

This is a slideshow of the top 10 candidates for fighter of the year compiled by me, boxing Featured Columnist Dave Carlson.  I'd love to hear your thoughts and feedback in the comments section. 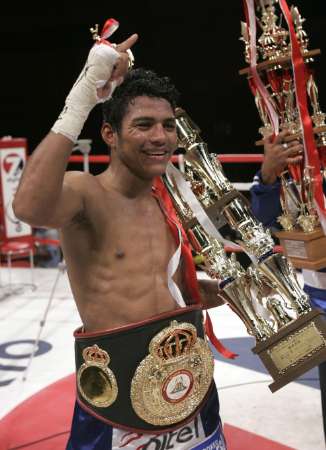 Roman Gonzalez, who I recently ranked 22nd best pound for pound fighter, is a relatively unknown, but very talented, light flyweight.  Usually fighting at around 108 pounds, he is in one of the least-recognized divisions in boxing, but there is no question he is a world-class talent.

Beyond that, he doesn't have much of a chance at becoming fighter of the year.

His record this past year has been impressive: three knockouts within four rounds against quality (but not world-class) opponents.  He is gaining recognition in the sport, and his 2010 resume is worth noticing, but falls short of what we expect from a fighter of the year.

The future is bright, however, for this young Nicaraguan. 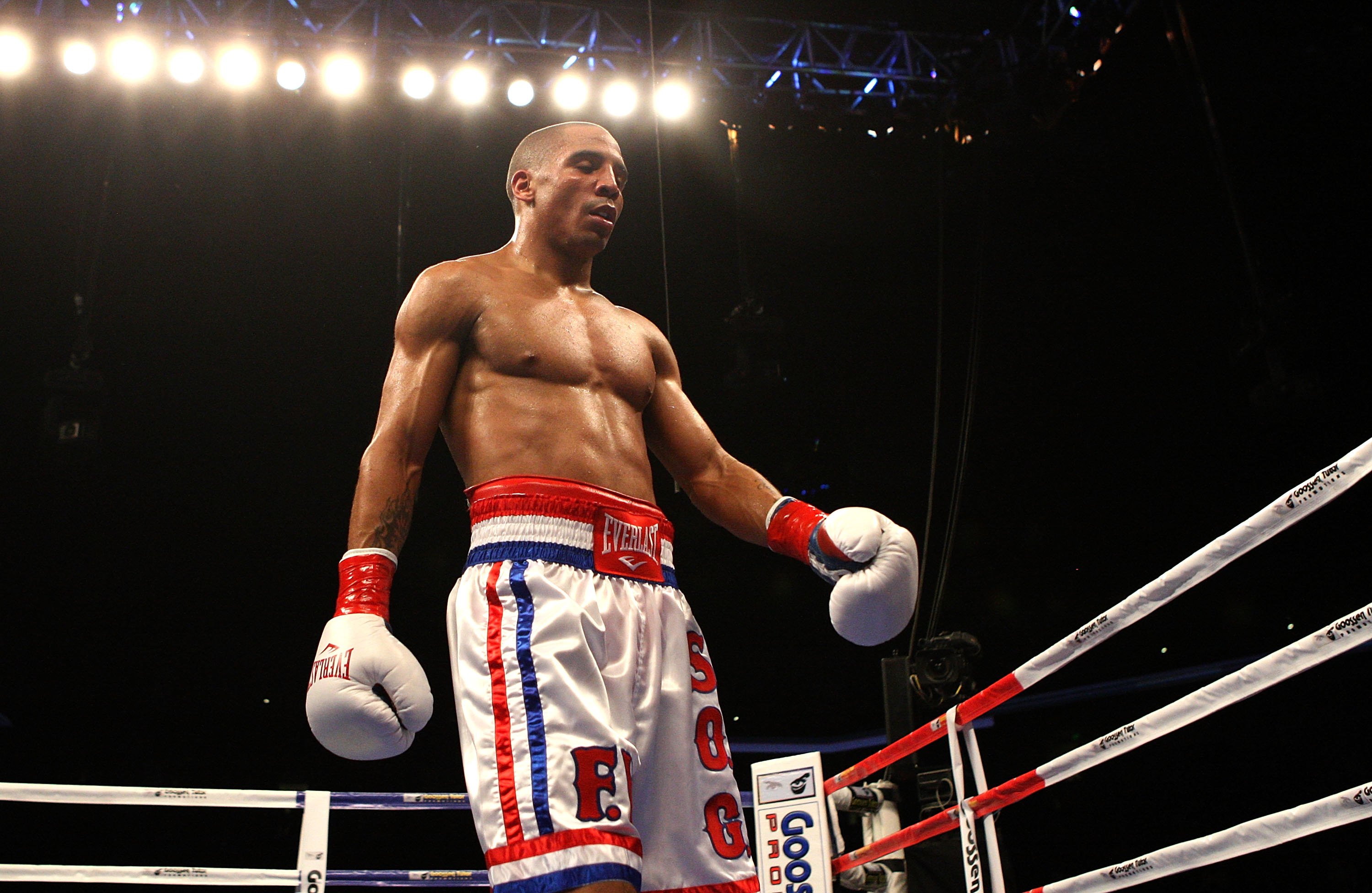 The leader of Showtime's high-profile Super Six tournament, Andre Ward is an undefeated (23-0) 26-year-old champion from Oakland who is one of the brightest young American stars in boxing.

One unfortunate missing piece of Ward's 2010 resume is his big win over 42-1 Danish superstar Mikkel Kessler, which happened in late November 2009.  Nonetheless, Allan Green and Sakio Bika were both top 10 super middleweights, and Ward not only outpointed them, but he did so in dominant fashion.  Of the six scorecards he has had this year, four had him winning by a perfect 120-108 margin, and the other two had him up 118-110.

Still, without a huge, high-profile win over a big-name opponent, Ward probably doesn't have that much of a chance for fighter of the year.

That said, he's definitely someone to watch for the 2011 fighter of the year race, as the Showtime Super Six comes toward its conclusion. 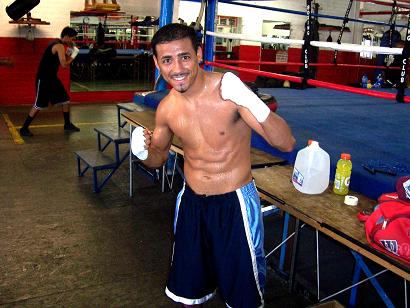 Giovani Segura is a flyweight who has seen his profile rise dramatically in the past year.  He has fought four times—a very high activity rate—and won one of the most significant bouts in recent flyweight history—handing longtime division king Ivan Calderon his first loss in impressive fashion.

Segura's win helped him replace Calderon on the top of the division's rankings, making him one of only five current division champions in Ring Magazine's rankings.

He has had an impressive resume, but the relative obscurity of the division might prevent him from being considered the fighter of the year.

Nonetheless, he definitely belongs in the discussion, with four wins by stoppage, including a major victory against Calderon. 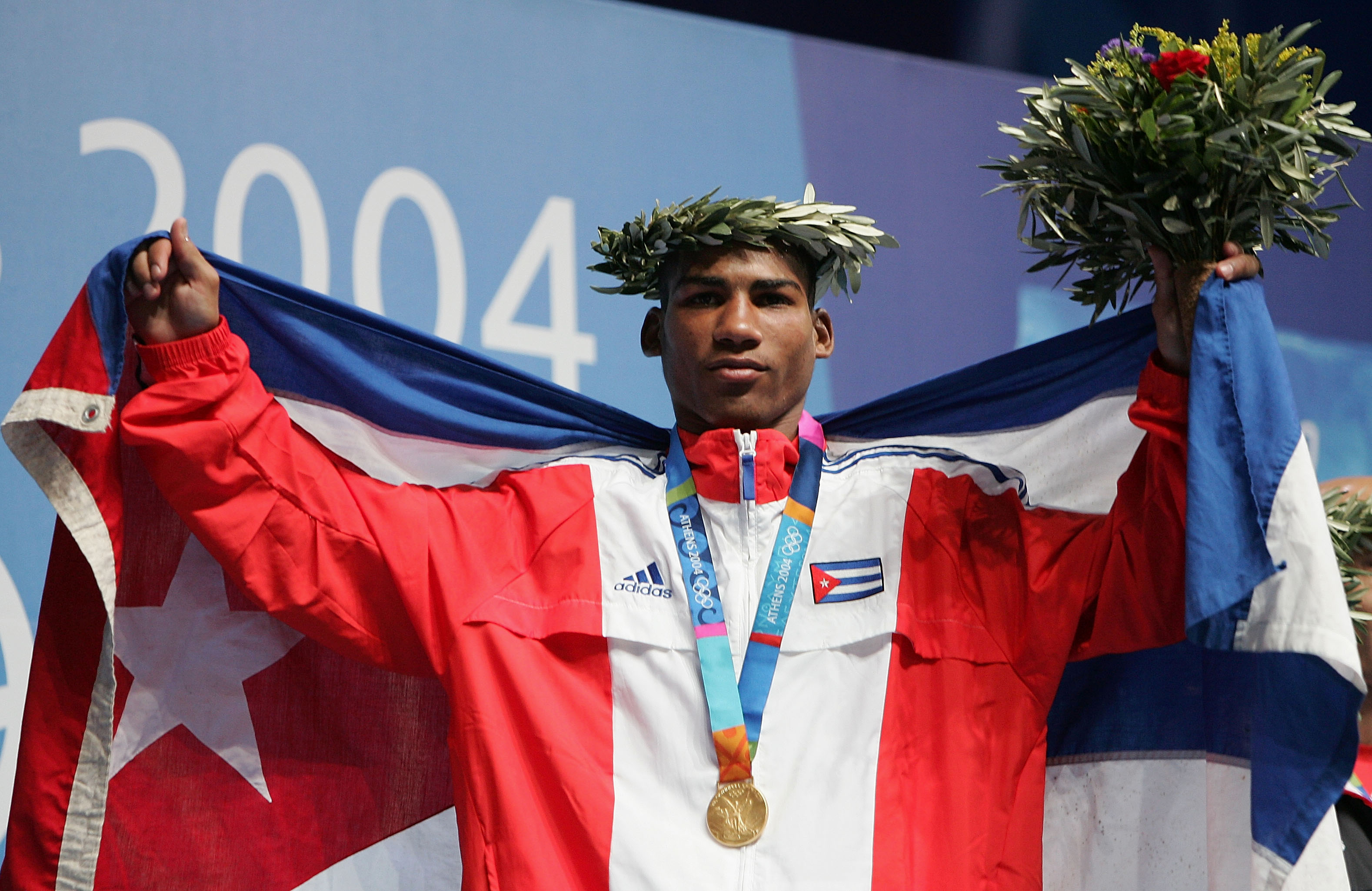 Yuriorkis Gamboa is a 28-year-old featherweight, originally from Cuba but now based in Florida, who has put together an impressive panel of victories against very capable fighters.  Serious boxing fans have probably heard of all three of his opponents, and Mtagwa and Salido are far more dangerous than their loss totals might suggest.  Gamboa dominated all three.

I recently put this 2004 Olympic gold medalist in the top 25 of my pound for pound rankings, and this year, he morphed from a top prospect into a true world champion.

He is another person who definitely belongs in the fighter of the year discussion. 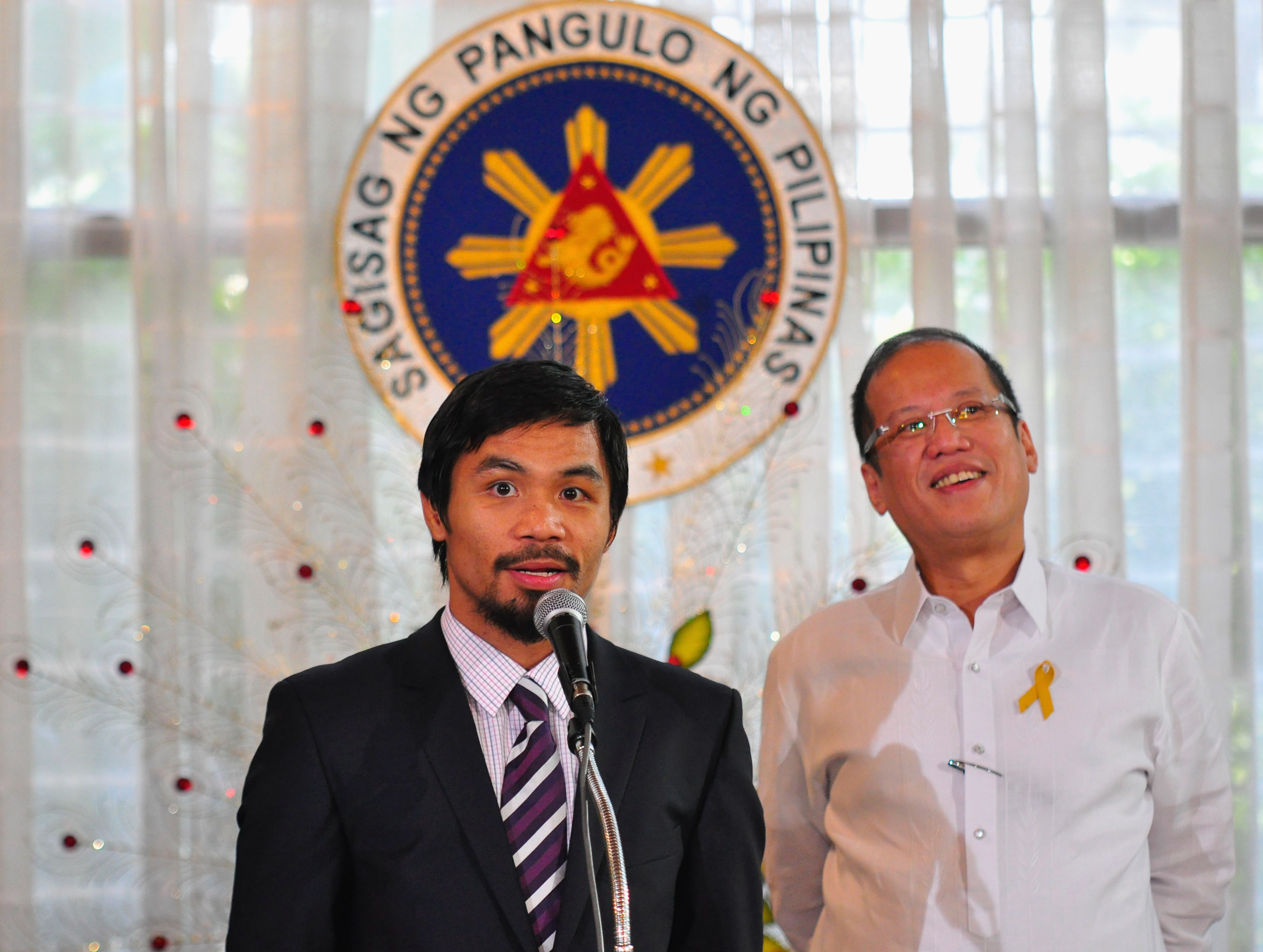 Pacquiao—the two-time defending Ring Magazine fighter of the year (he won the award in 2009, 2008 and 2006)—has looked very good as king of the boxing universe this year, but he hasn't had the kind of resume he did when he won the award the previous three times.

Neither Clottey nor Margarito—while undoubtedly world-class fighters with recognizable names—were ranked in the top three of their divisions by Ring at the time of their fights with Pacquiao.

Pac Man dominated both of these opponents, and belongs in the discussion, but unless boxing writers all simultaneously agree on some huge marketing push, the prognosis isn't looking good for Pacquiao to three-peat as Ring Magazine's fighter of the year.

That said, he's still the top pound-for-pound fighter in boxing. 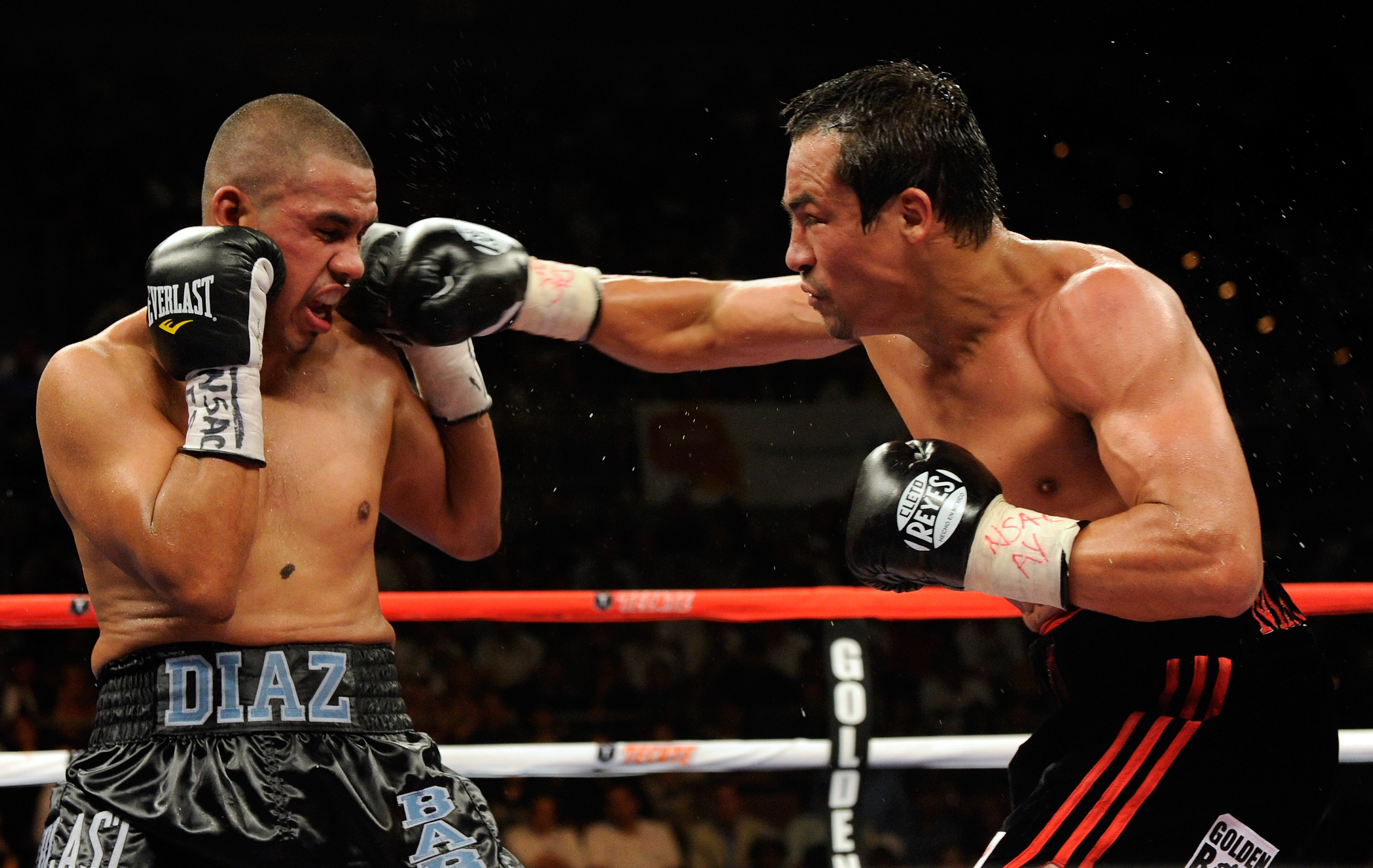 Although it certainly did wonders for his pocketbook, I still think it's somewhat unfortunate that most casual fans are most familiar with Marquez as the undersized, over-matched opponent of Floyd Mayweather, Jr. in his 2009 comeback fight.

For the past 10 years, Marquez has been one of the top ranked fighters in all of boxing, and still falls short of getting the recognition he deserves.

What has he accomplished in 2010?  A second win against skilled Juan Diaz—this time in much more convincing than his win in 2009's fight of the year against the same opponent.  And just this past weekend, he dispatched rugged Australian (and Ring's second-ranked lightweight) Michael Katsidis.

Marquez, who celebrated his 37th birthday in August, is one of the greatest and most intelligent boxers of our time.

His 2010 record is impressive, and it's a testament to the fighters above him on this list that Marquez is only ranked number five for fighter of the year. 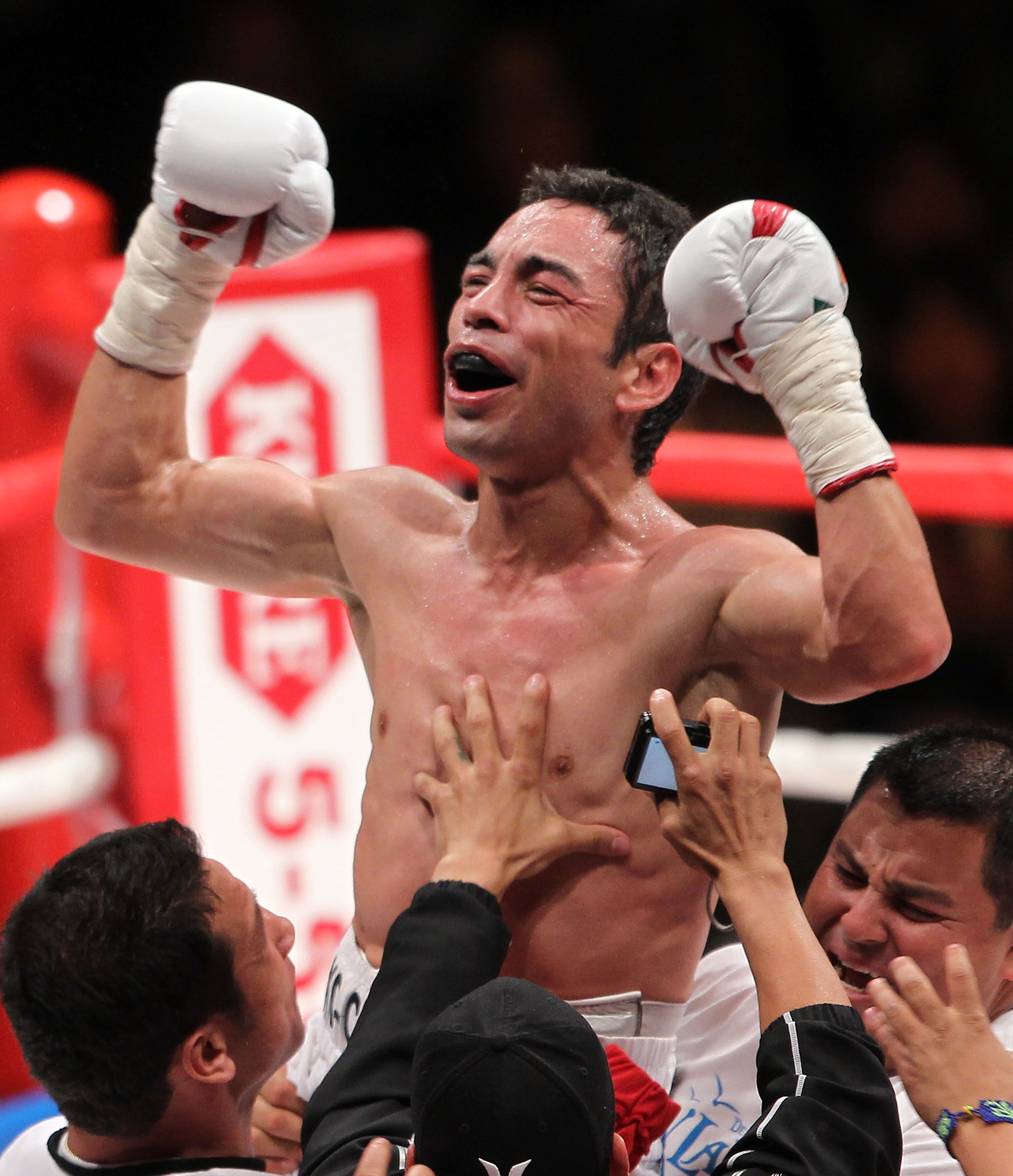 Fernando Montiel is one of the top ten pound-for-pound fighters in boxing today, and his 2010 resume is the reason why.  His win in April over top-ranked Hozumi Hasegawa was stunning and probably the first huge win of 2010.  It immediately vaulted him into contention as one of the frontrunners for 2010's fighter of the year, and he followed it up in good form with a third round TKO of Rafael Concepcion.

However, a dirt bike accident led to a postponement of Montiel's next fight, which was still against an "opponent to be named later."  The fight will still take place in 2010, but 21-5 Eduardo Garcia might not be the guy to push Montiel's resume over the top.

If Montiel can score another knockout within four rounds, though, he certainly has a legitimate shot at being 2010's Fighter of the Year. 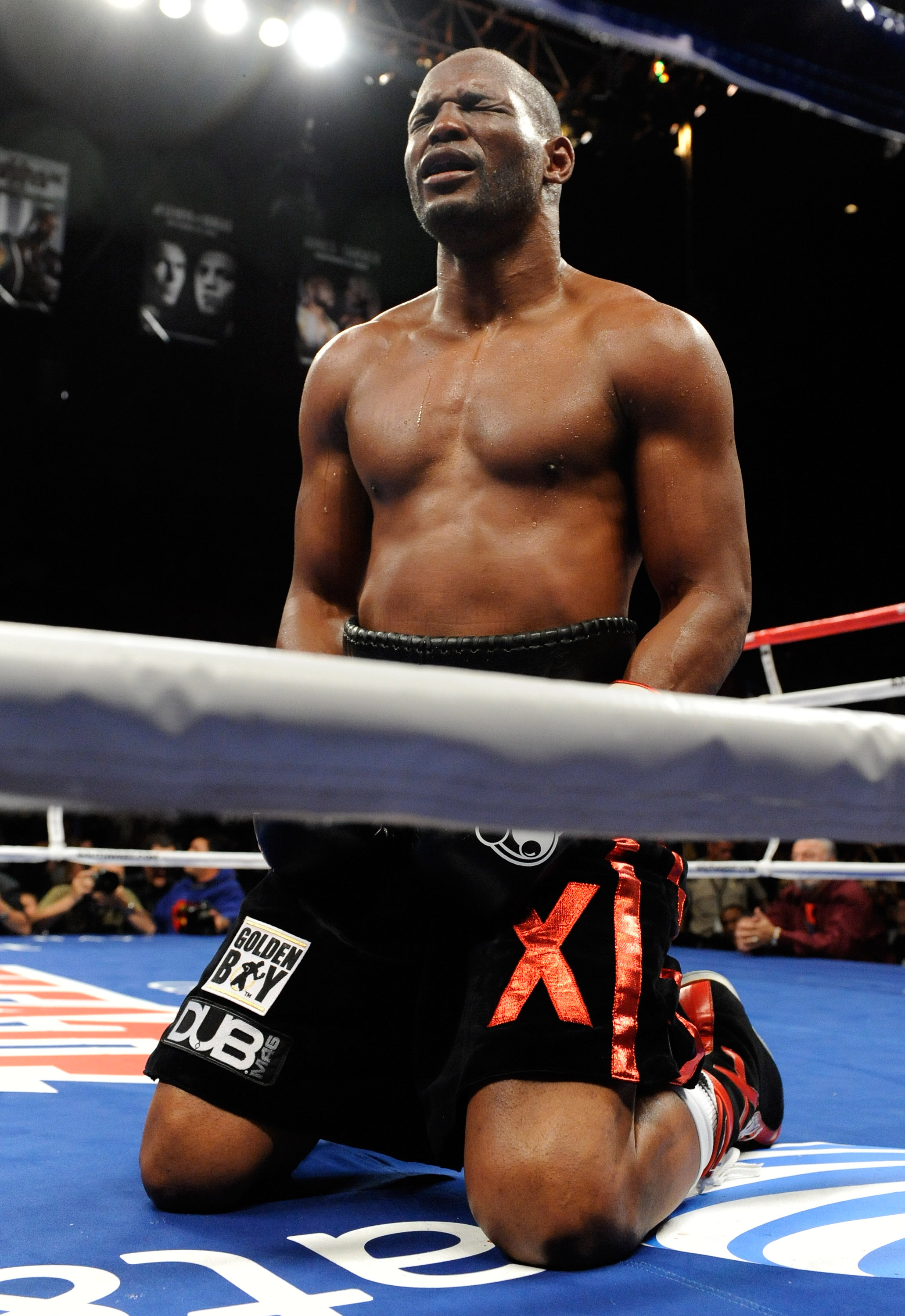 These two fighters face off on December 18th in Quebec City, Quebec, and the winner will be a definite contender for fighter of the year.  Whoever wins that bout will have won a match this year against a living legend and Ring's top-ranked Light Heavyweight (Chad Dawson was Ring's No. 1 prior to Pascal's win over him in August).

For Pascal's part, few predicted he would upset the favored Chad Dawson, and if Pascal can now beat a still-relevant legend in Hopkins, then he definitely belongs on the short list of FOTY candidates. 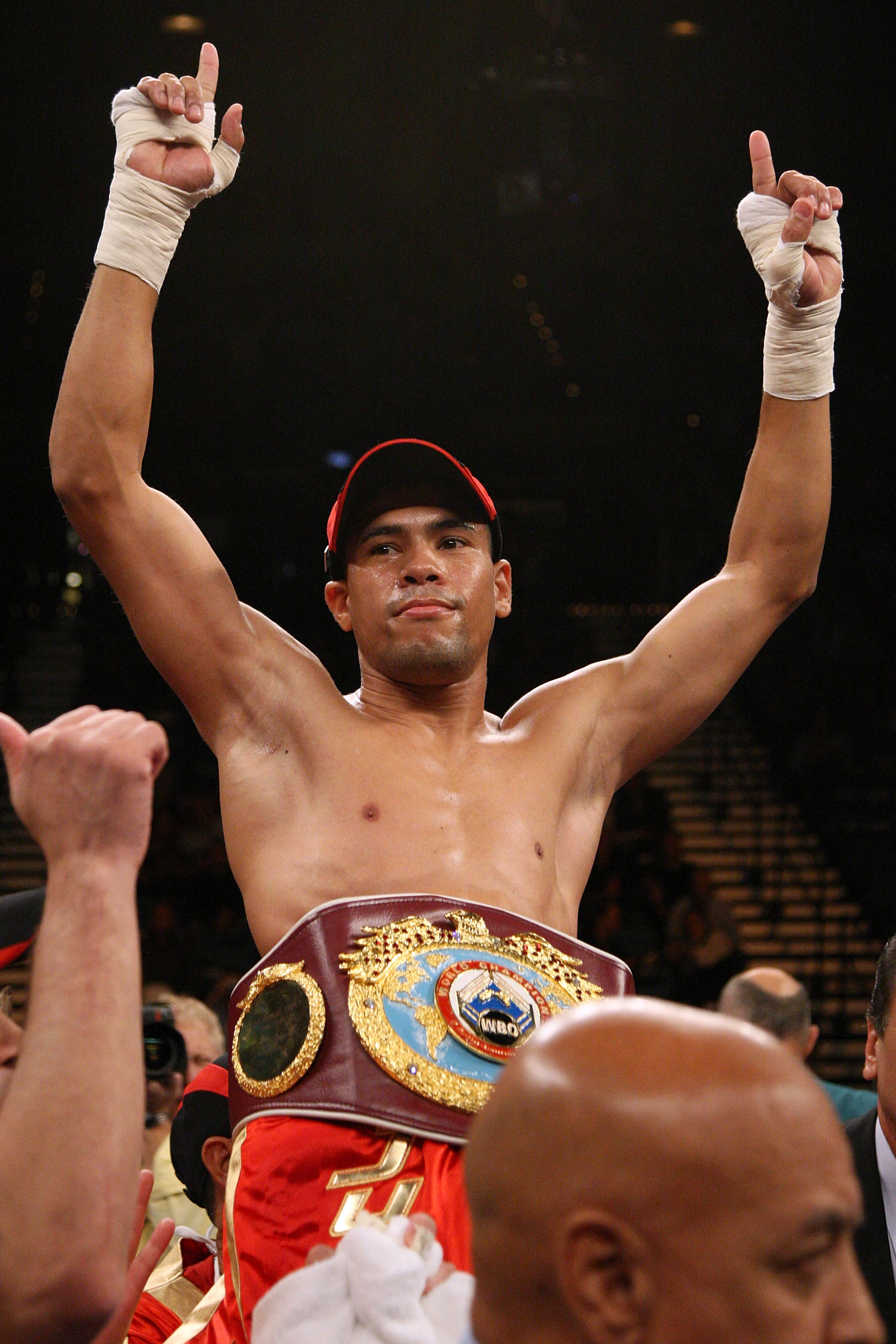 Juan Manuel Lopez, a Puerto Rican who just entered Ring magazine's top 10 pound for pound rankings last week, was the subject of a recent article of mine naming him as Pacquiao's potential successor as the biggest star in boxing.

A look at his 2010 resume reveals why: three stoppage wins over world-class fighters, and a potential fight of the year in his match-up with the legendary Rafael Marquez.  Juanma has a decent chance at taking the fighter of the year award this year. 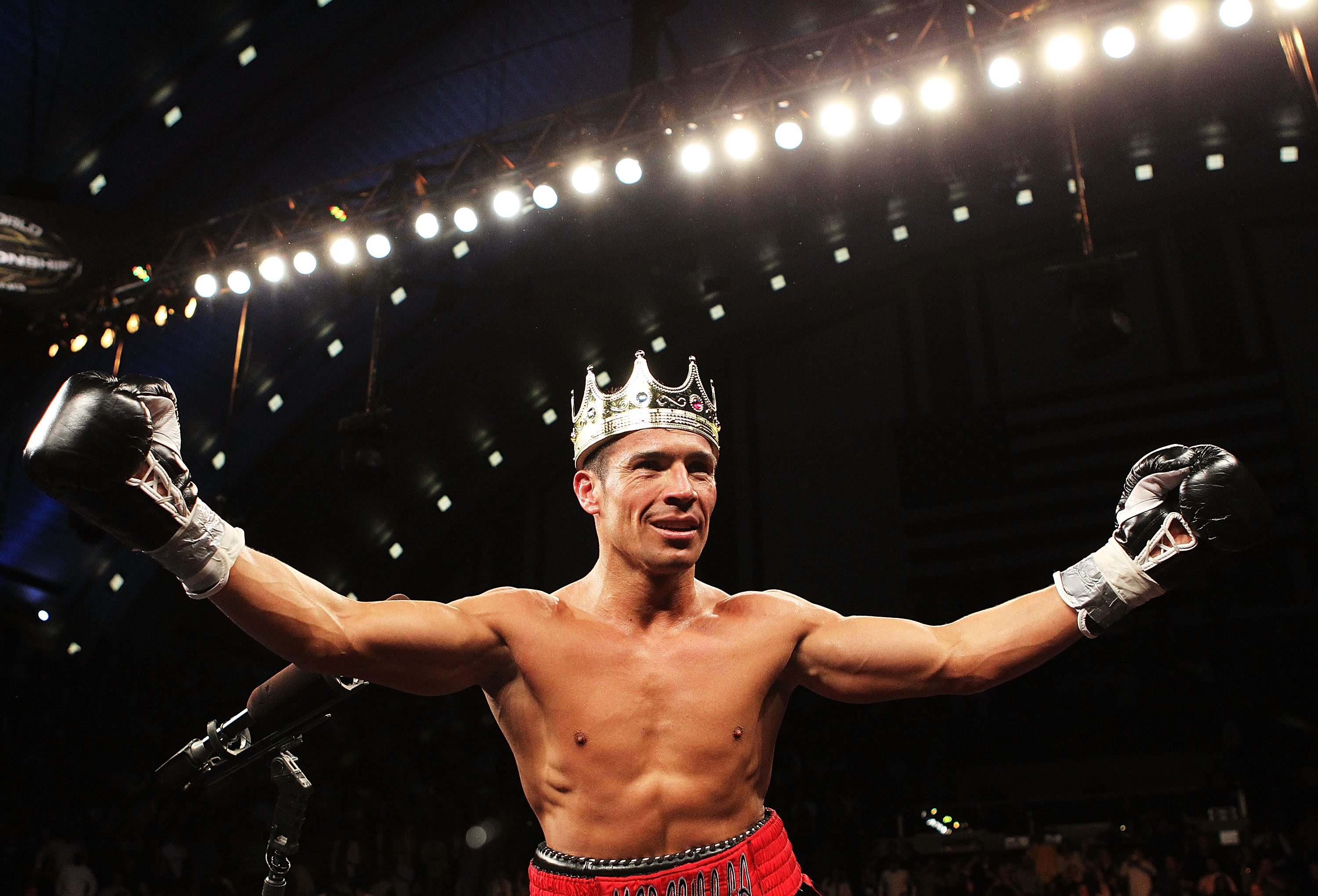 The 35-year-old Argentinean boxer who I have called "the most important man in boxing" had a career year in 2010.  He handed top-ranked and always-dangerous Kelly Pavlik only the second loss of Pavlik's career, and then came into a rematch of one of 2009's finest bouts and stunned the world with a second-round knockout of Paul Williams, who was one of Ring's top five pound for pound fighters.

The knockout of Williams was one of only two fights this year where a Ring Magazine top five fighter was defeated (the other was Floyd Mayweather Jr.'s win over Shane Mosley in May).  That win launched Martinez into the number three spot on Ring's pound for pound rankings, making him the third best fighter in the world behind Mayweather and Pacquiao.

Sergio Martinez had boxing's biggest year in 2010, and seems to be the frontrunner for Fighter of the Year honors. Juan Manuel Lopez, Jean Pascal, Fernando Montiel and the high-profile Pacquiao are the only ones who have any legitimate chance of taking it away from Martinez.

If Sergio Martinez does win, it would be the first time since 2005 that someone not named Pacquiao or Mayweather won the award, and would make Sergio Martinez one of the true kings of boxing.  We eagerly anticipate the awards announcement in late December.