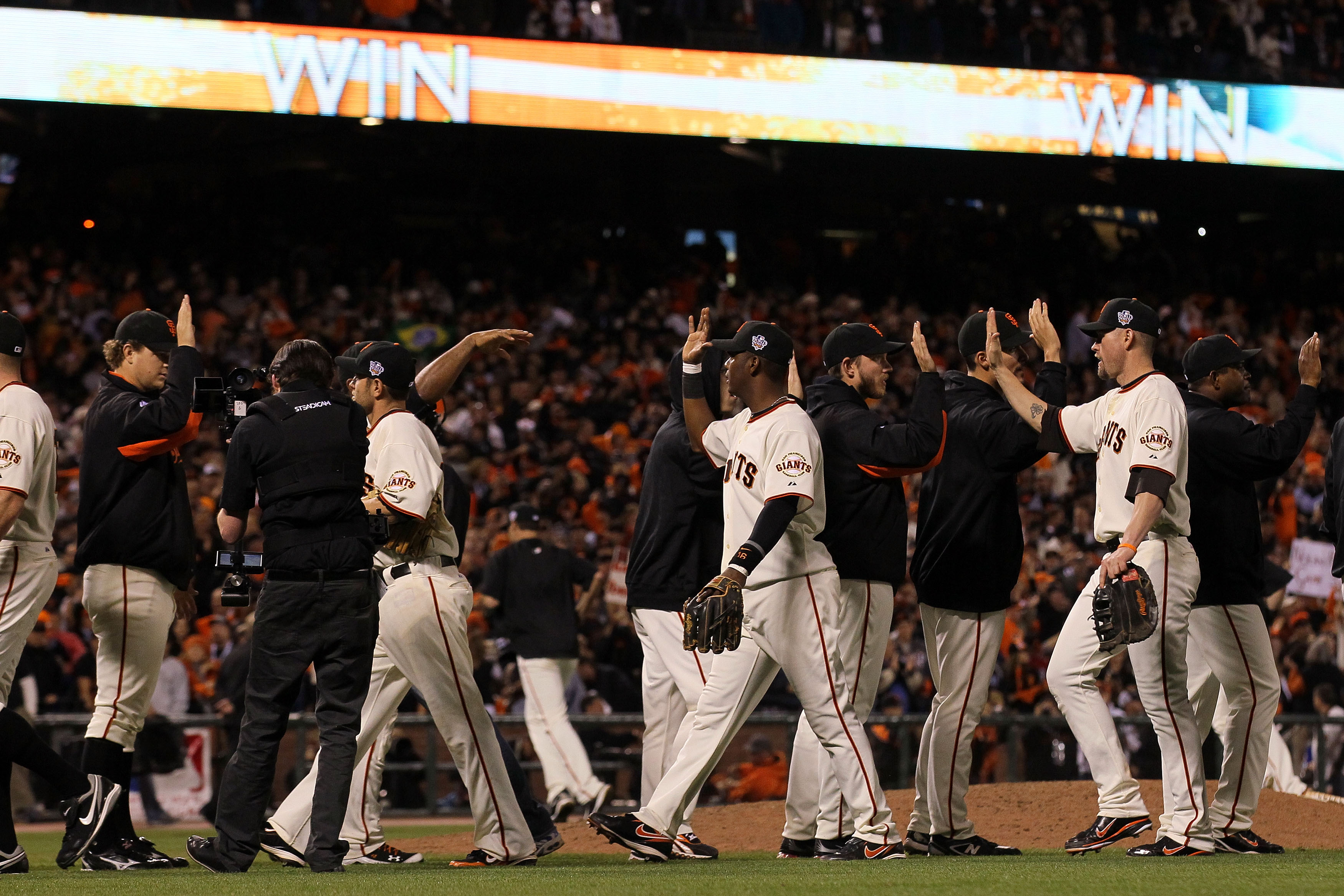 I called my buddy, let's call him Michael, after Game 2 of the World Series. I figured he would be in a bar in San Francisco watching the Giants game.

Upon calling, a random stranger picked up the phone. I heard screaming, I heard joy, and far in the distance, I heard Michael screaming "Ya! Go Giants!"

That epitomized what the first two games in San Francisco have been for Giants fans: a big party.

The Giants beat the Rangers 9-0 Thursday in Game 2, completing a homestand in which they outscored the Rangers 20-7. In two games. Yeah, I didn't see that coming either.

Here is the San Francisco Giants report card for Game 2. 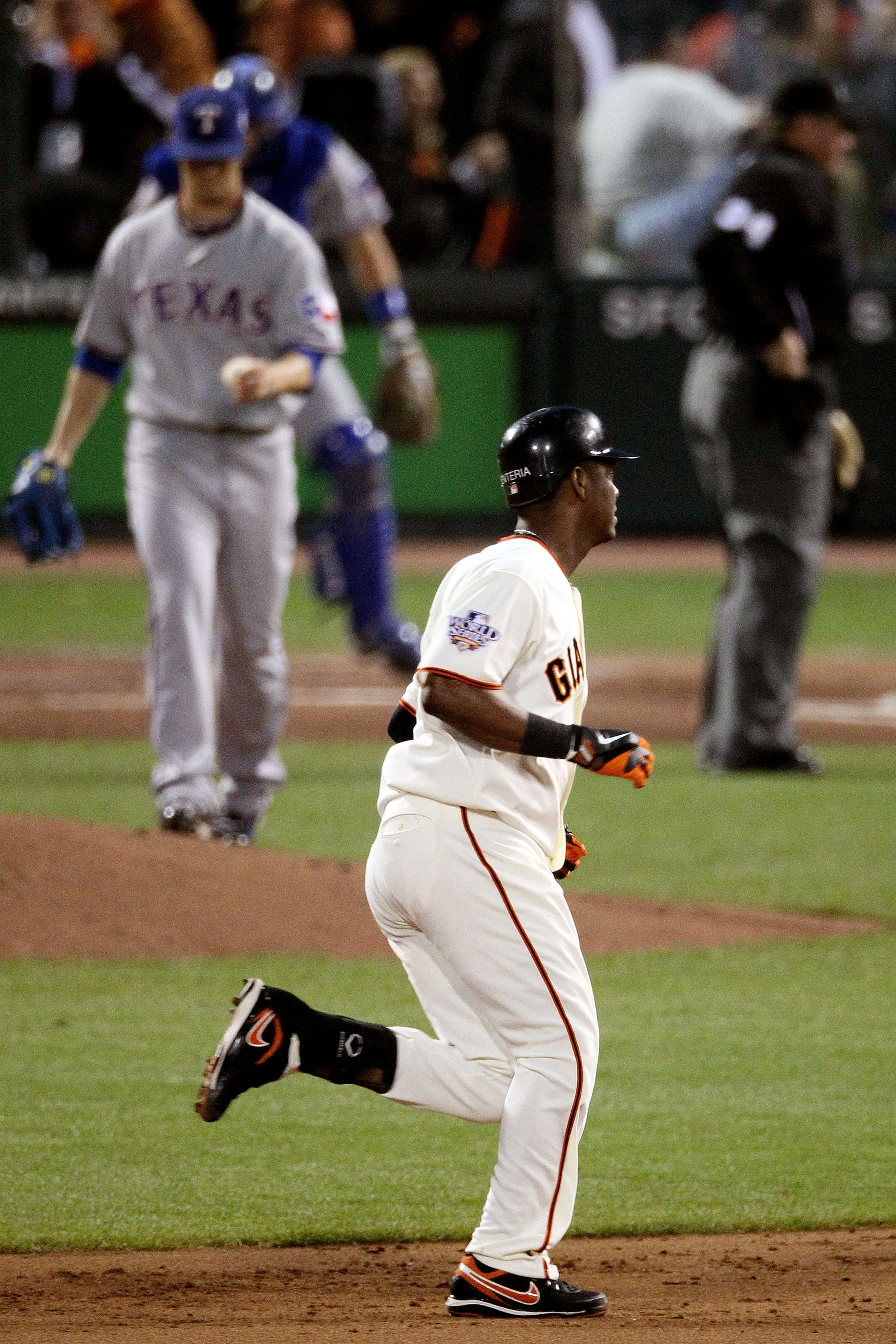 This was supposed to be the game the Giants came back down to Earth. After scoring 11 runs in Game 1, there was no way they could keep this up, right?

Wrong. It was a 1-0 game headed into the seventh inning Thursday night. It figured to be a close affair, but then the Giants offense exploded for the second time in two days, scoring one in the seventh and a whopping seven runs in the eighth.

Edgar Renteria, Juan Uribe and Aaron Rowand were the top performers offensively. Renteria, who had three home runs all season, hit a blast to left in the fifth to put the Giants up 1-0. Uribe singled home Cody Ross in the seventh.

And then came the eighth. Reminiscent of the Giants six-run fifth inning in Game 1, San Francisco stormed through the inning on four hits and four walks (the Texas bullpen didn't exactly have the best day).

The crazy thing is it all came with two outs (Andres Torres and Freddy Sanchez both struck out to start the inning). But after a couple of bases-loaded walks, a Renteria single, a Rowand pinch-hit triple and a Torres double, the Giants found themselves up 9-0 going into the ninth. That was all they needed.

This team scored more runs in these two games than it had in back-to-back games all season. A World Series performance like this deserves nothing else than an "A." 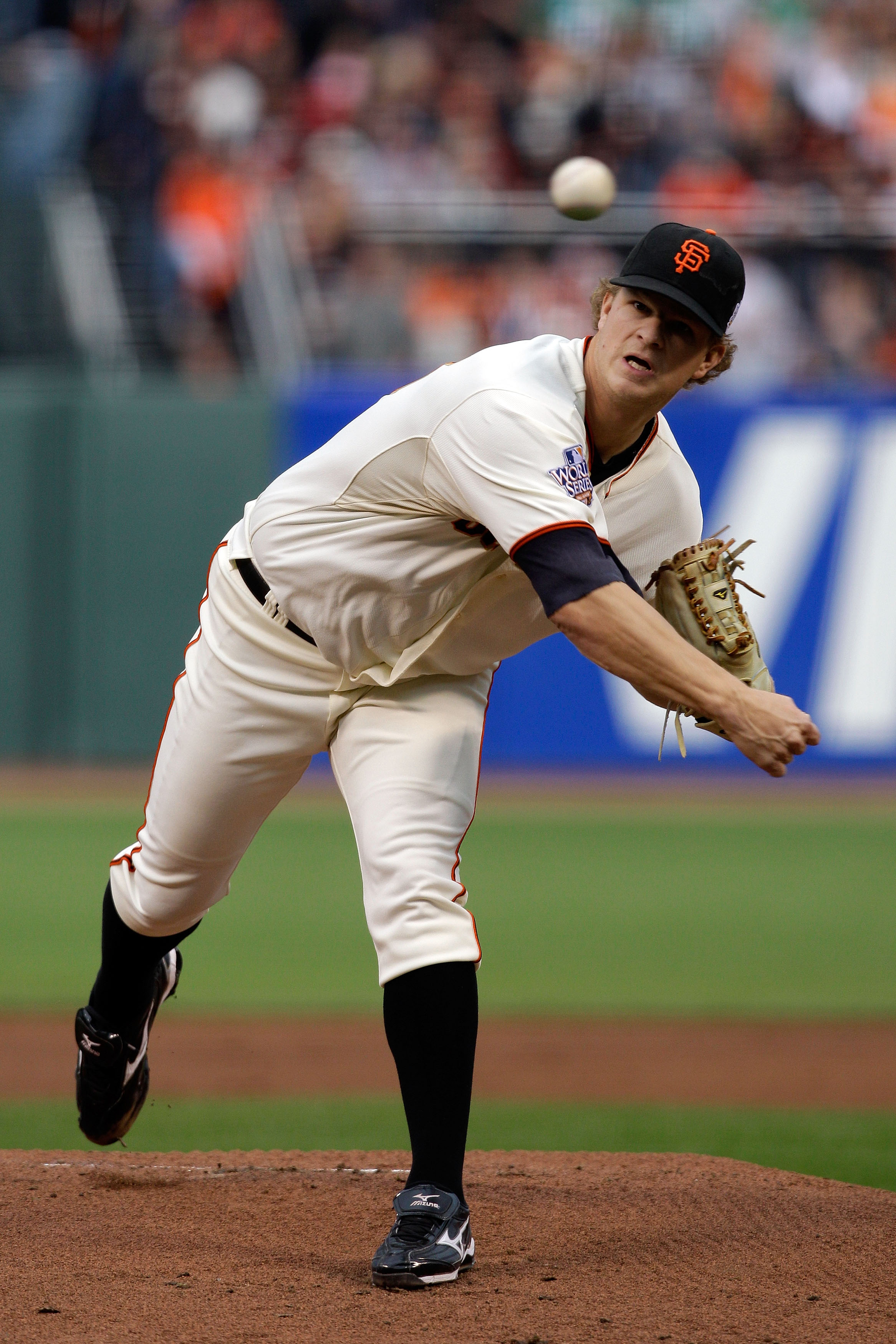 Cain was masterful. He pitched seven and two-thirds innings of shutout ball, giving up four hits and two walks. Rangers power bat Nelson Cruz had a particularly difficult time with Cain, going 0-for-3 with two Ks against the curly haired wizard.

If you pitch like that against the Rangers offense, you get an "A." 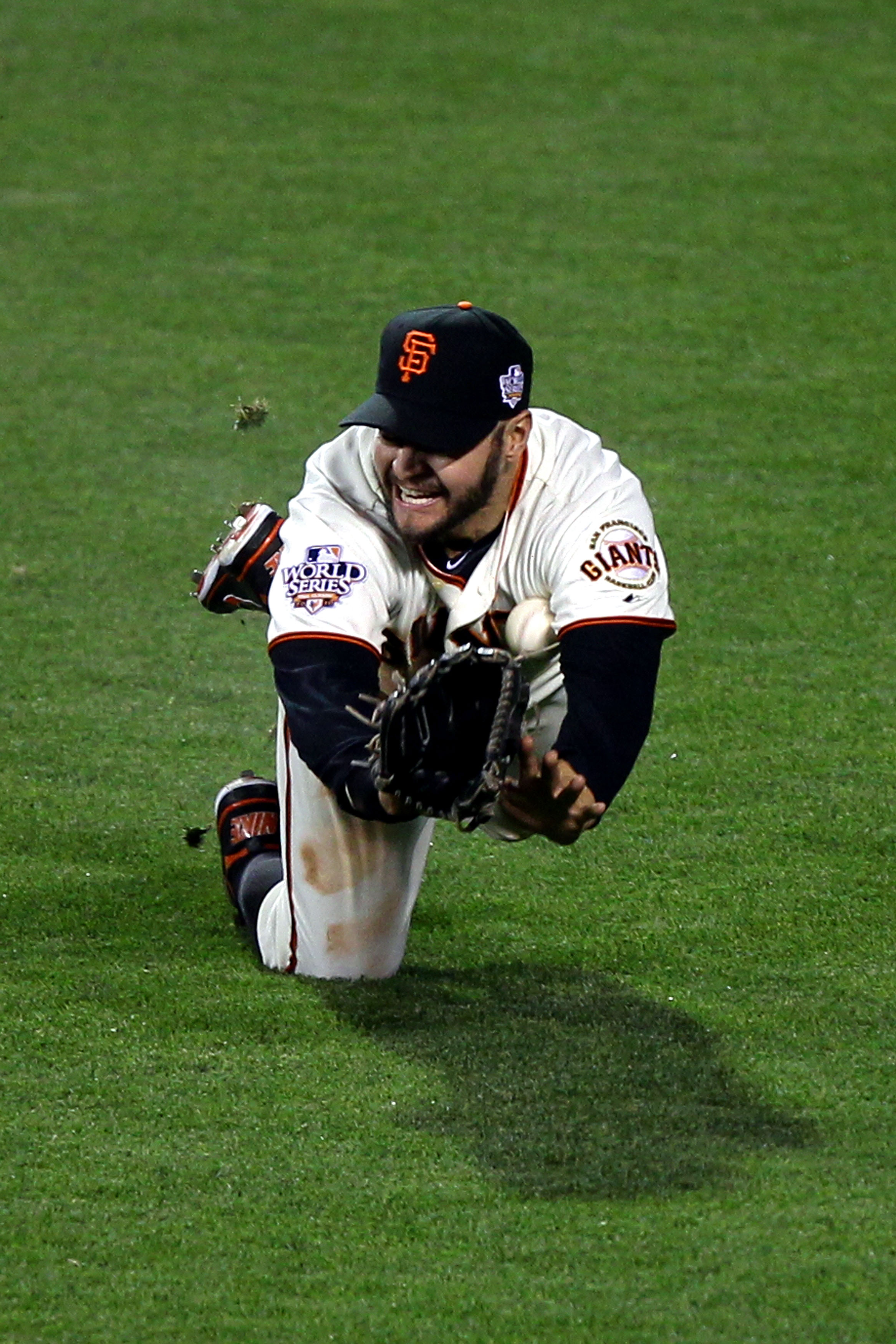 No errors and a great play by Cody Ross—why shouldn't this team get an "A?" The only scare in the game came in the sixth, when Josh Hamilton hit a sinking liner to right field with Michael Young on first. Ross dove and trapped the ball, saving an sure Young score. At the time, the Giants were only up 1-0.

Renteria has been solid at shortstop, gobbling up everything that comes his way, and Nate Schierholtz made a nice running play in right center field to save at least a double in the seventh inning. 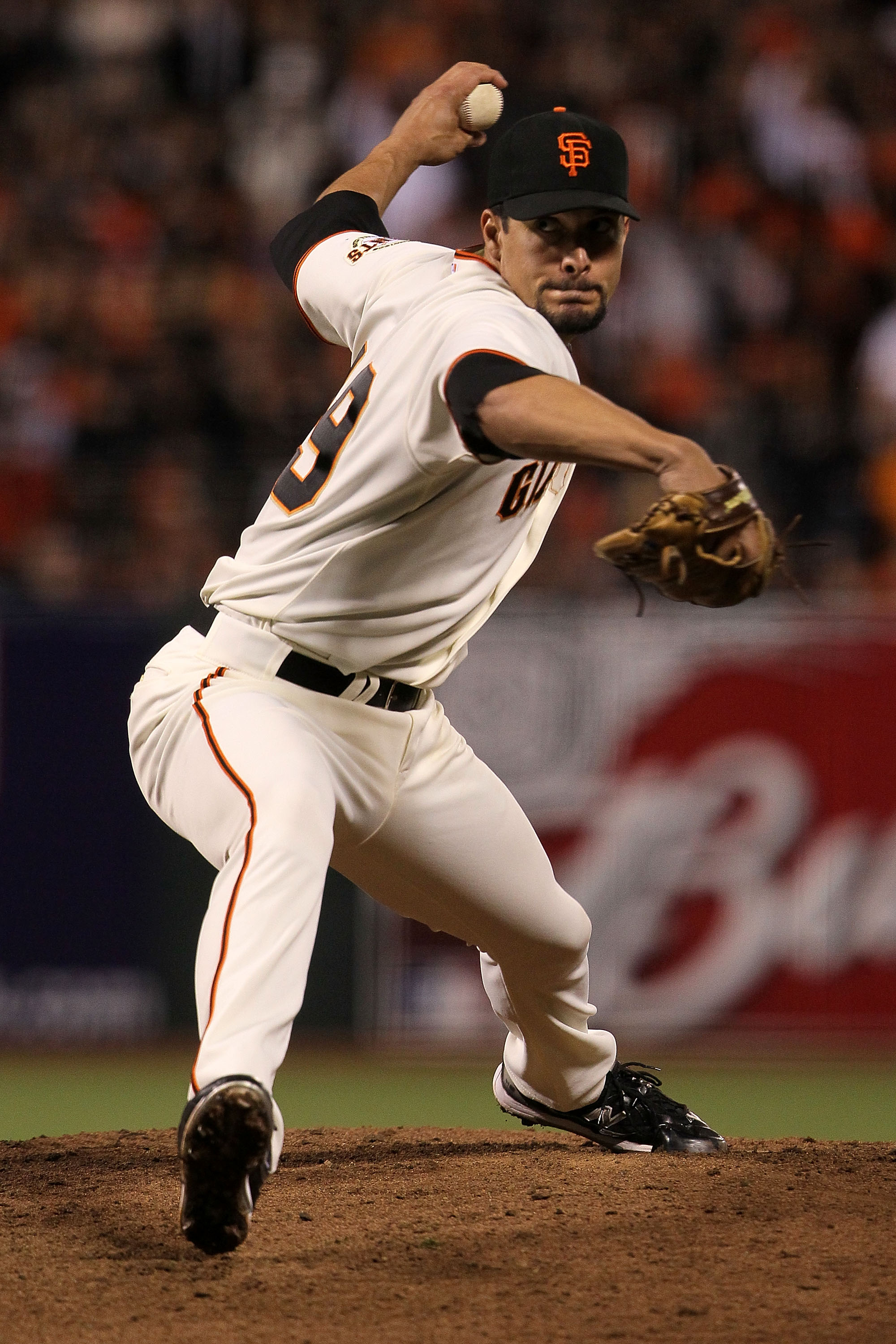 After touching up the Giants bullpen at the end of Game 1, the Texas offense was stymied in Game 2. With Elvis Andrus on second and Josh Hamilton up to the plate in the eighth—when the game was only 2-0—manager Bruce Bochy took Cain out of the game for lefty Javier Lopez, who's been brilliant ever since coming to the Giants midseason.

Lopez calmly got Hamilton to hit an easy fly ball to center field for the third out. Right-hander Guillermo Mota, who hasn't been used all that much this season, worked a scoreless night to finalize the shutout. 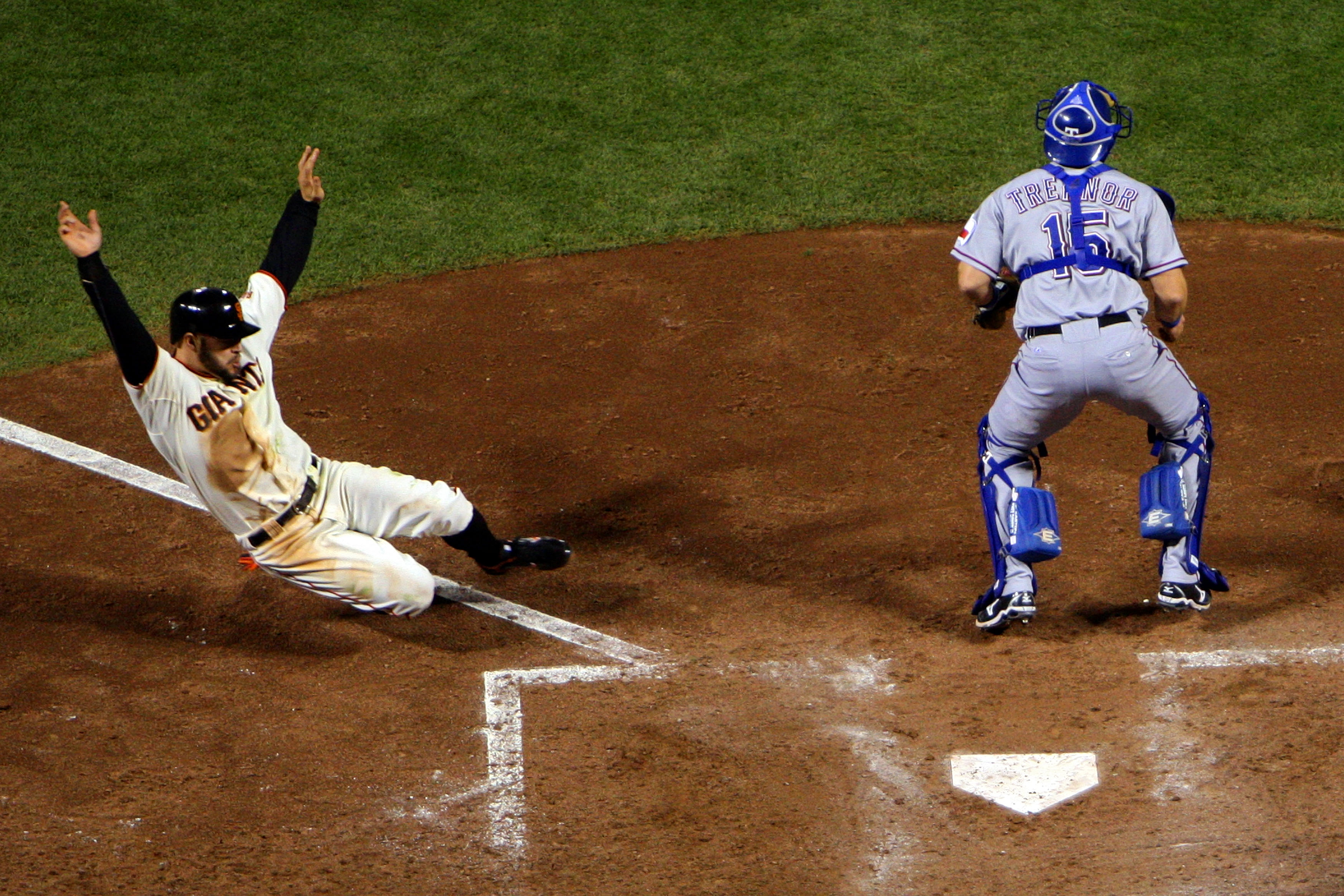 The Giants didn't make a mistake on the basepaths, mostly because all they had to do was either walk home or run home with no real chance of getting thrown out. Pretty la-tee-da—nothing special, but they get a "B" for not making any boneheaded mistakes. 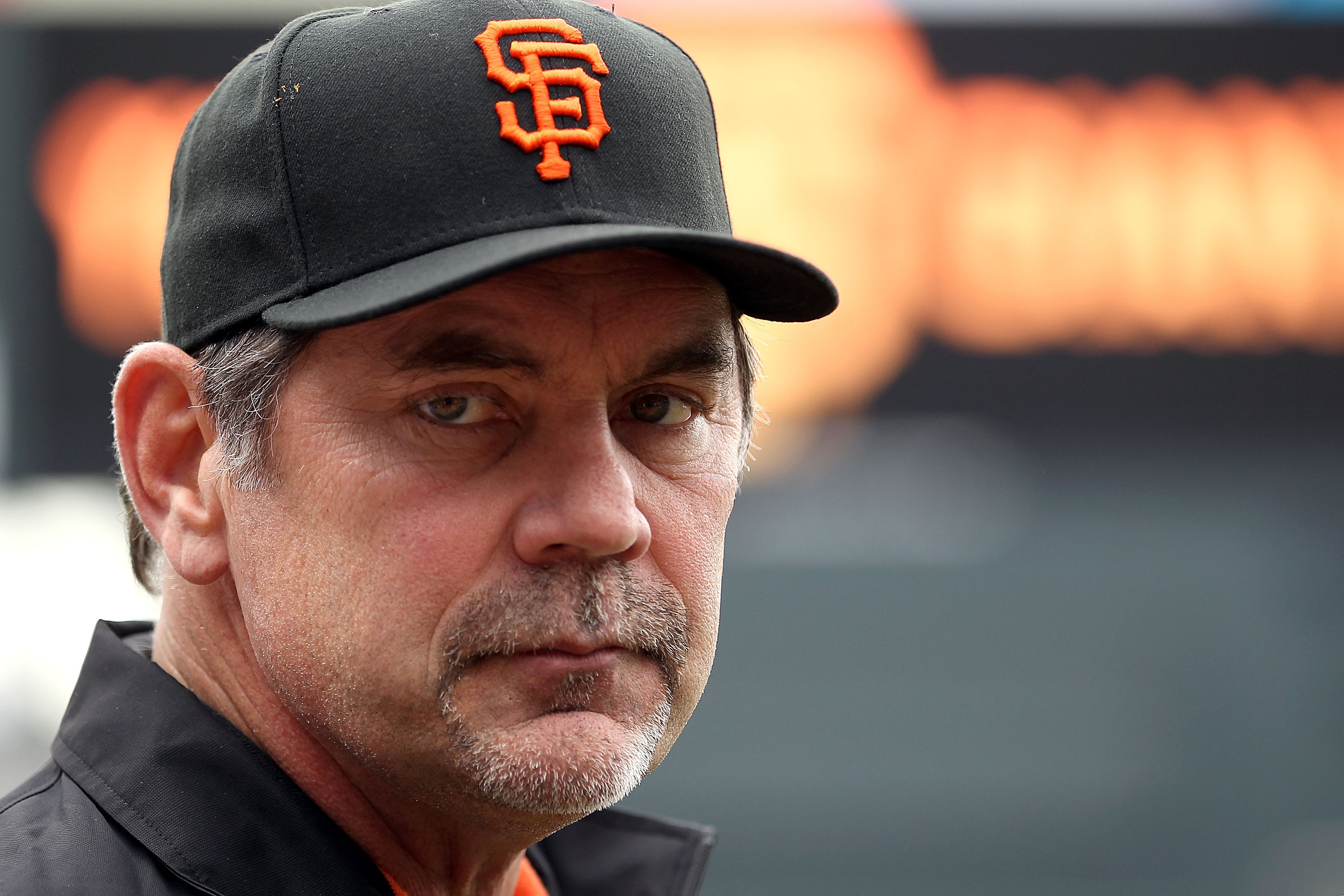 How can you not give Bochy an "A" after how this team has performed in the first two games?

Substituting Lopez for Cain to face Hamilton in the eighth was the right move, despite Cain's great night. Bochy pinch-hit Aaron Rowand in the seven-run eighth after Ron Washington put in a lefty to face Mike Fontenot. Rowand responded by tripling home two runs.

Bochy also took Pat Burrell out and put the speedy Nate Schierholtz in right field in the seventh. In that inning, Schierholtz made a nice running play to snag a ball that would get past most fielders.

Bochy can't make a wrong move now. Look at that intensity in his eyes.