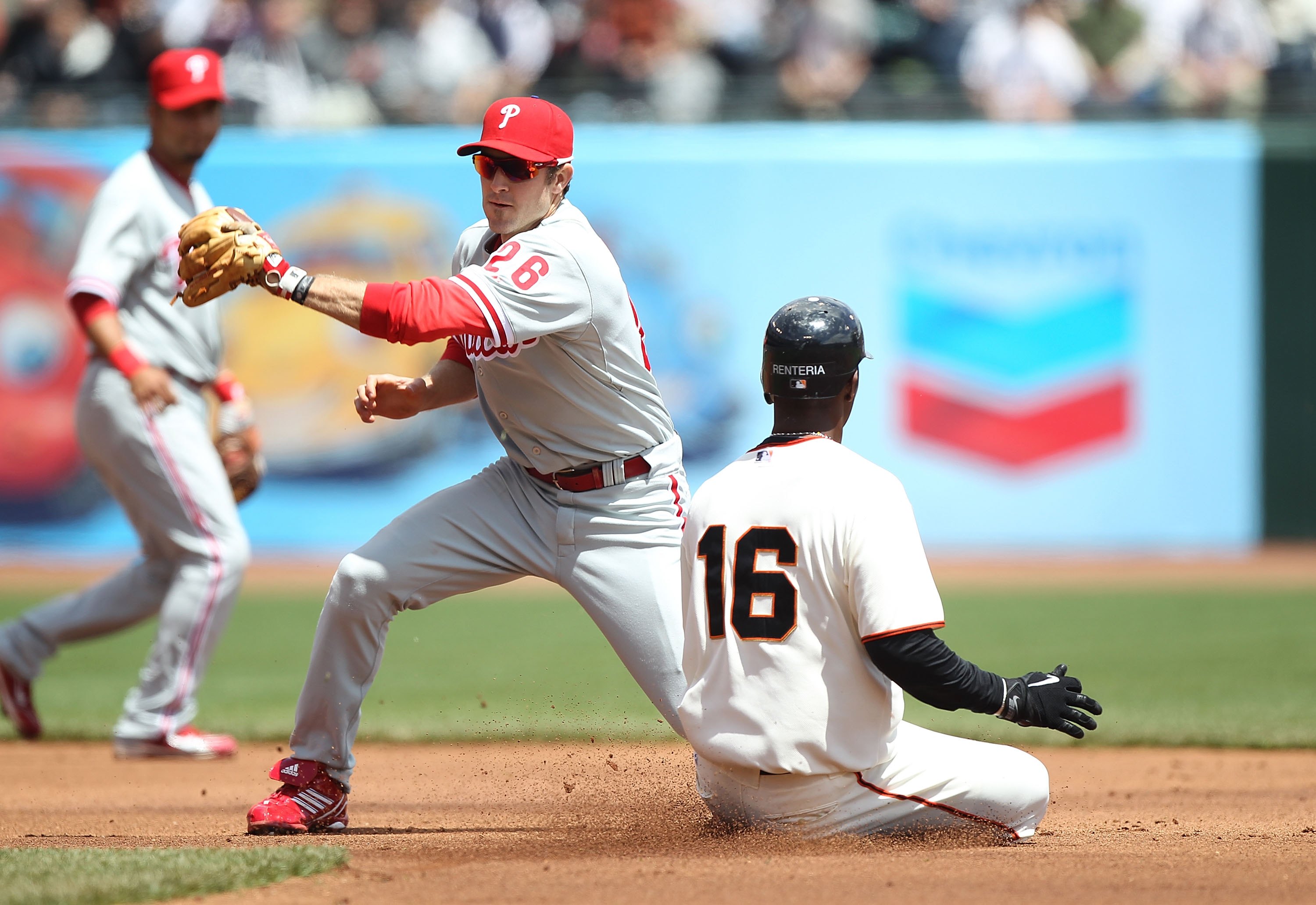 The Giants knocked off the Atlanta Braves in Game 4 of the NLDS on Monday (Bobby Cox, we hardly knew ya) and move on to face the Phillies in the National League Championship Series for a chance to go to the World Series.

The matchup pits one of the best teams in baseball for the last five years against one of the best teams in baseball history. While the Phillies are looking to become the first National League team since the St. Louis Cardinals in the 1940s to make three straight World Series appearances, the Giants haven't been to a World Series since 2002 and are still looking for their first championship since moving to San Francisco.

Here is a look at some of the ins and outs of the upcoming series. 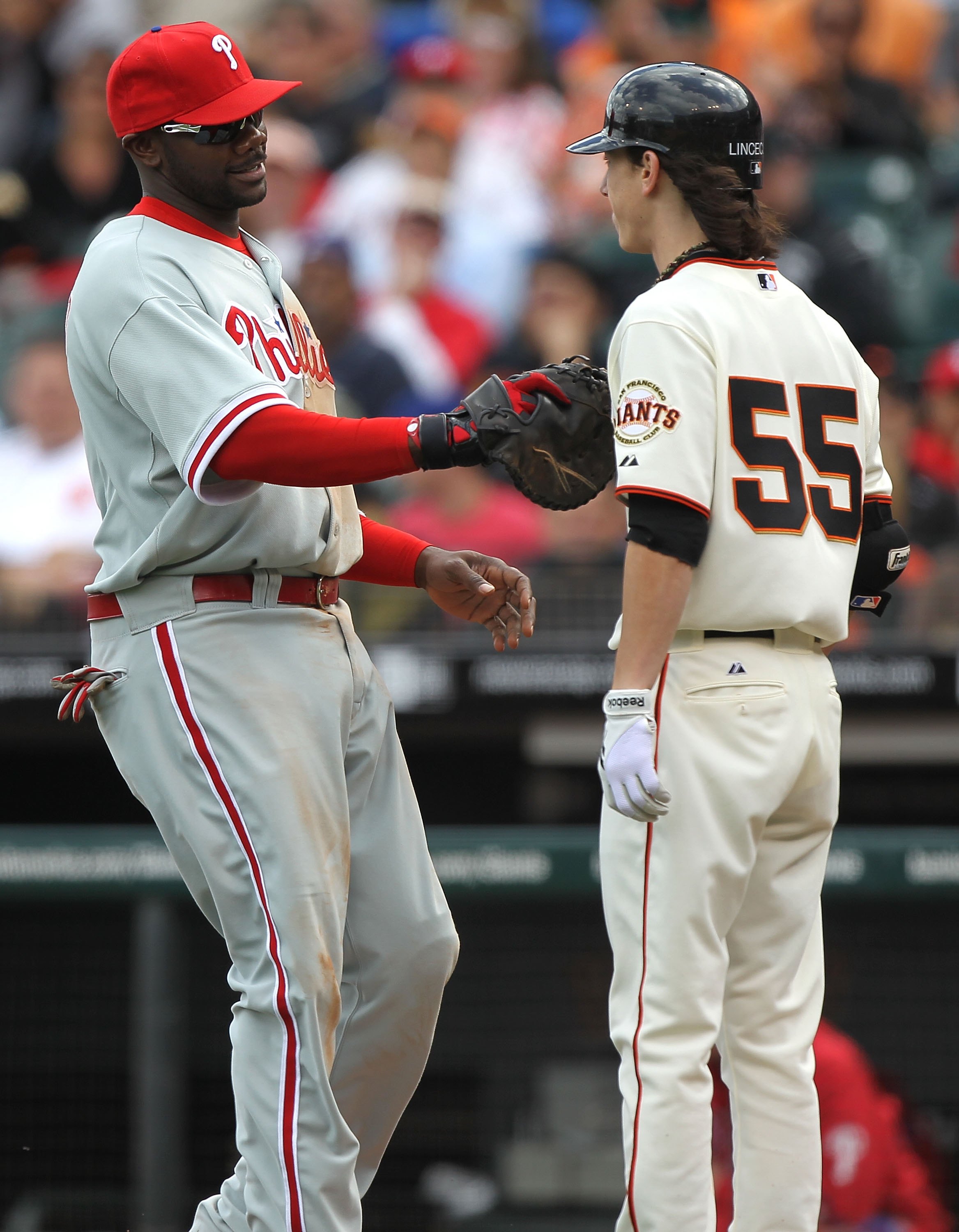 First of all, I decided not to use this photo three different times because I thought it was Ryan Howard talking to a Giants bat boy.  Turns out, it's Tim Lincecum.  Wow.

We've got reigning two-time NL Cy Young Award winner Tim Lincecum and the man who will almost end that reign in 2010 in Roy Halladay.

Perhaps most importantly, or perhaps just most historically, we've got two of the oldest teams in professional baseball, who both began play in 1883 (during the Chester A. Arthur administration) as the New York Gothams and the Philadelphia Quakers. 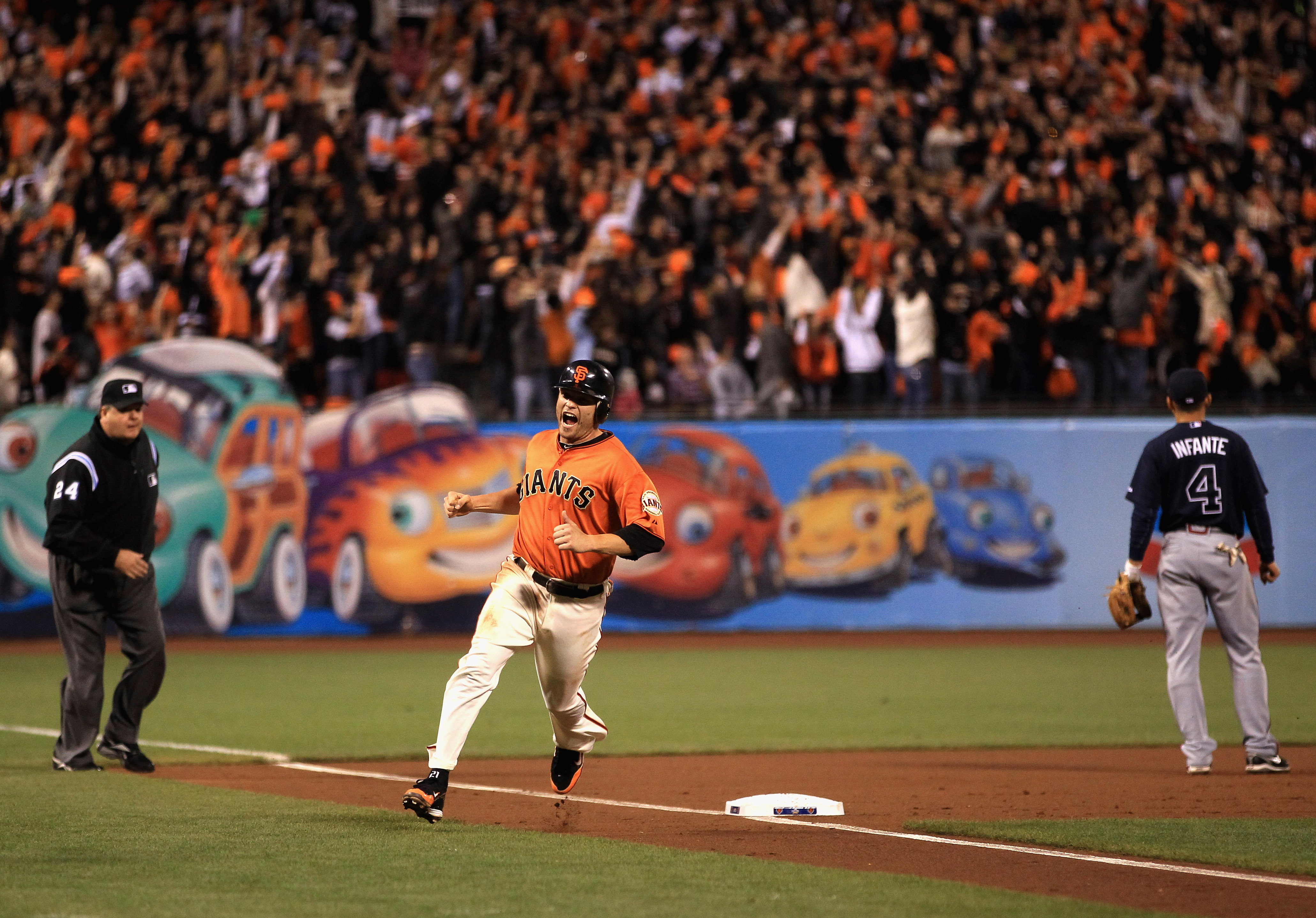 Before we get to the nitty-gritty, here are some odds and ends:

- the San Francisco Giants will be starting two former Phillies in the outfield, Pat Burrell and Aaron Rowand. Ironically, Burrell spent nine years in Philly and won a World Series there, and it is Rowand, who spent two decent seasons there, that Philly fans remember more fondly;

- Aubrey Huff, Roy Oswalt, and Brad Lidge were all teammates on the 2006 Houston Astros;

- the 2010 season series between these two teams played to a 3-3 tie, with the Phillies scoring 29 runs and the Giants scoring 27 runs. Each team took two of three at home;

- the Giants' Edgar Renteria is looking to play in the World Series in a third decade, having been on the 1997 Florida Marlins and the 2004 St. Louis Cardinals

- the youngest player in this NLCS will be Madison Bumgarner, who is 21 and was born on August 1, 1989; the oldest player in the series will be Jose Contreras, who is 38 and was born December 6, 1971. Jamie Moyer, though injured, will be in the dugout for the Phillies, and was in his fourth season in baseball when Bumgarner was born.

- the Giants and Phillies have never met in the playoffs. However, they did lose consecutive World Series in 1950 (Phillies) and 1951 (Giants) to the New York Yankees. 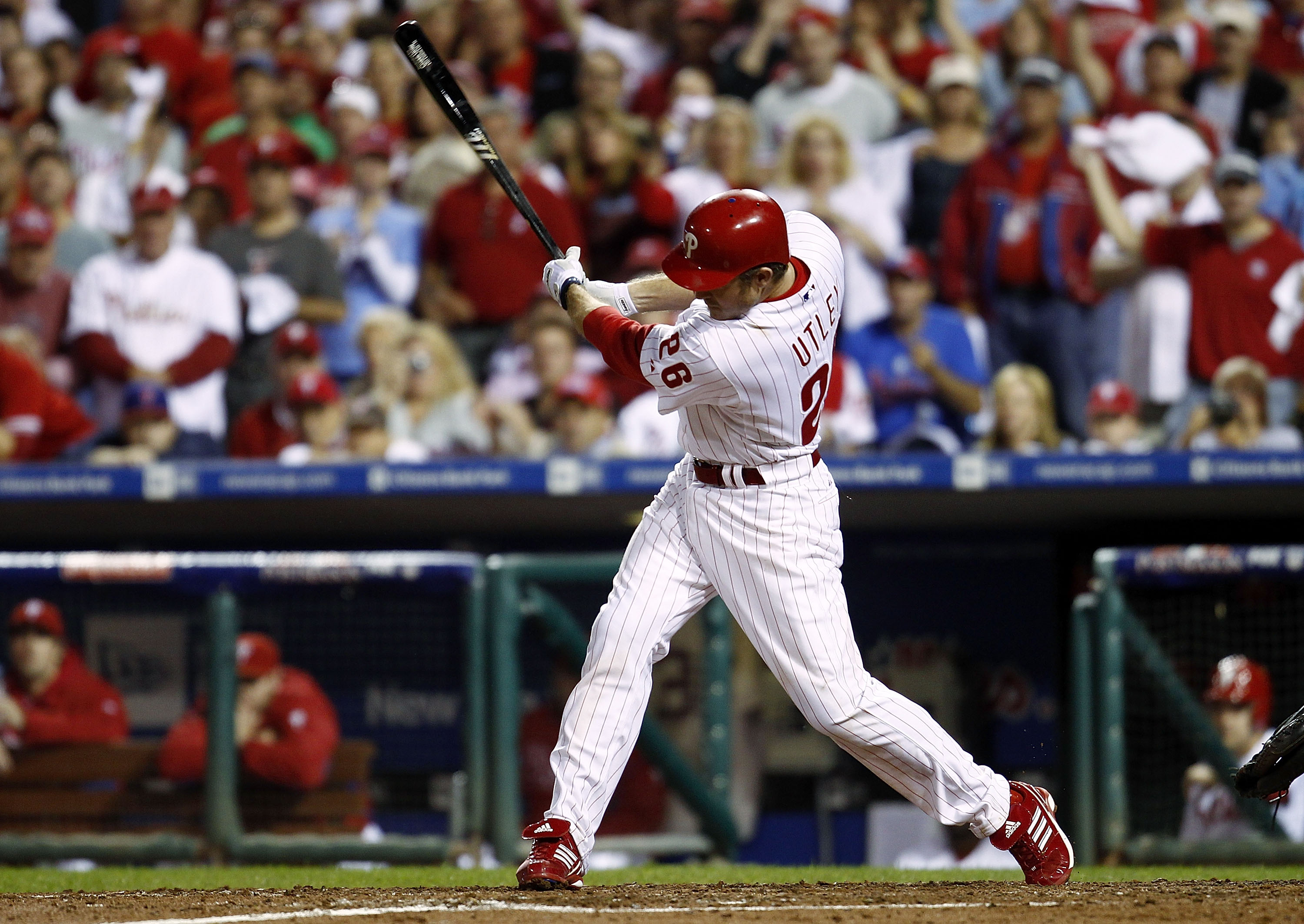 There can be no doubt that the Philadelphia Phillies are the better hitting team in this matchup. The Phils finished second in the National League behind Cincinnati (and ahead of Colorado) in runs scored per game, with 4.77, while the Giants finished with a just-below league-average 4.30 runs per game.

Nevertheless, this is not the mighty Phillies offense we've come to expect in the last four years; the Phils were certainly prone to falling asleep at the wheel this season. In the entire month of August, the Phillies hit only .241 with a .312 on-base percentage, hitting only 18 home runs.

And in the NLDS against Cincinnati, the Phils batted only .211 with an OPS in the fives; it was not an offensive effort that swept Cincinnati out of the playoffs.

The Giants, meanwhile, had a very strange month of September, in which they hit .235 with a team on-base percentage under .300 (very rare), but hit a season-high 39 home runs. In the NLDS, all four games were decided by one run, as the Giants scored only one run in Game 1, and only three runs each in Games 3 and 4. 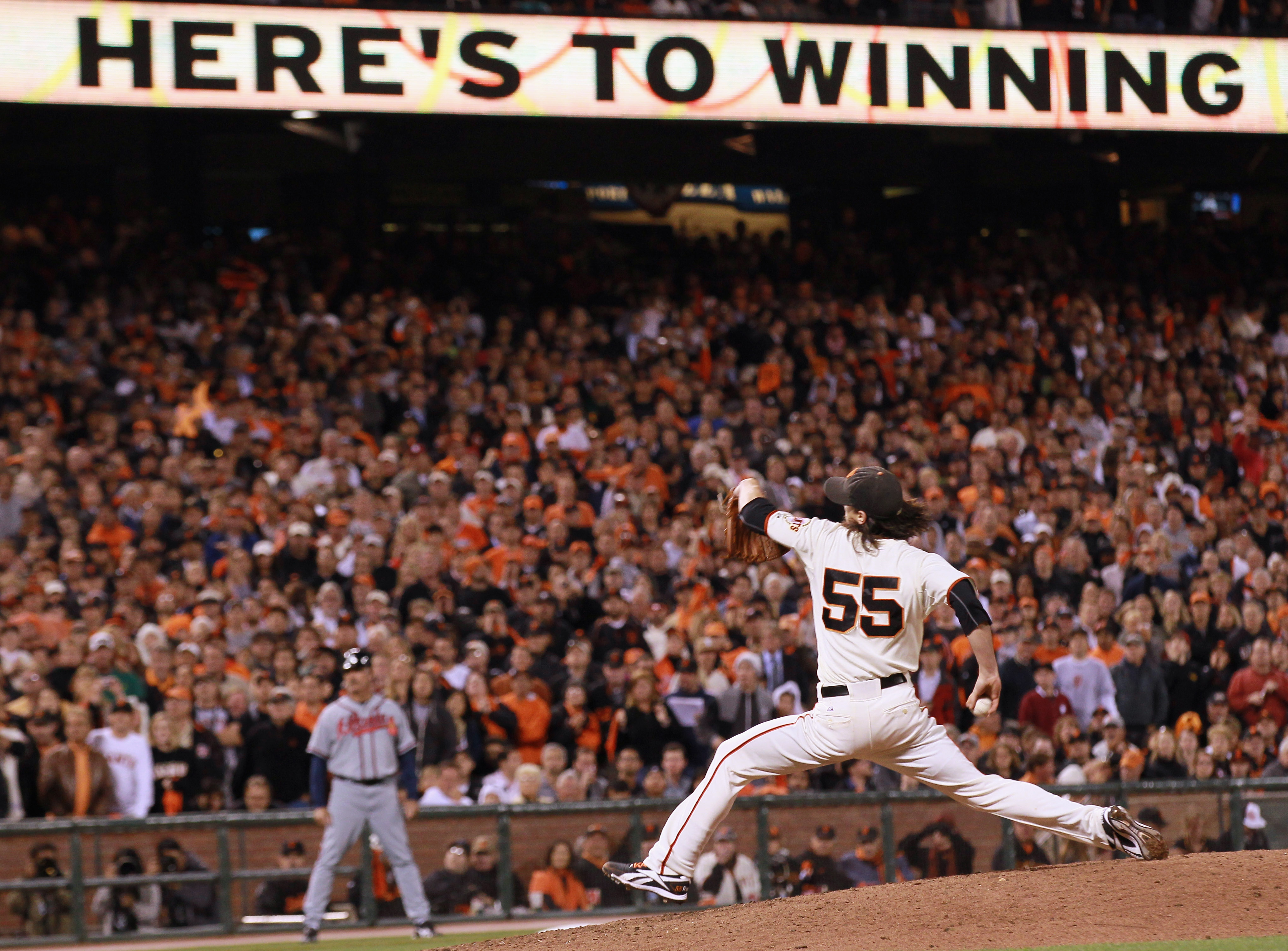 We could very well be on our way to seven outstanding pitching matchups, as the Phillies pit their three aces—Roy Halladay, Roy Oswalt, Cole Hamels—along with Joe Blanton against the Giants' outstanding four-man rotation of Tim Lincecum, Matt Cain, Jonathan Sanchez and Madison Bumgarner.

If 2010 was truly the "Year of the Pitcher," then it is only fitting that we may see a seven-game series in which the team that prevails may be the team that manages to score any runs at all in four different games.

Here's a staggering statistic: In the final month of the regular season, the San Francisco Giants as a staff had a team ERA of 1.91, which is unfathomable. 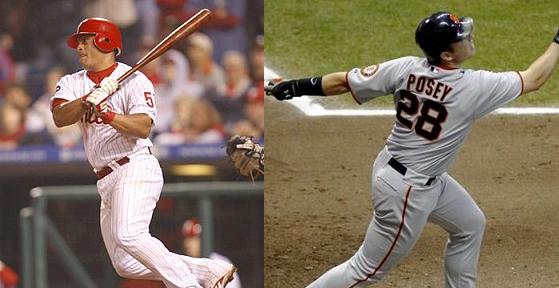 The key to this whole series may boil down to the catchers, as the 2010 NLCS will feature two of the NL's top four or five catchers, Carlos Ruiz of the Phillies and Buster Posey of the Giants.

Posey wasn't necessarily supposed to be ready this season, but he tore up Triple-A and forced his own promotion. In 108 games, he emerged as one of the Giants two or three best hitters and proved more than capable behind the plate. He threw out 37 percent of attempted base stealers and had a 3.18 catcher's ERA, as opposed to 3.54 and 3.50 for Eli Whiteside and Benji Molina.

Whereas Posey has made an immediate splash with the Giants, it took Ruiz quite some time to become a staple of the Phillies lineup. Nonetheless, in 2010, Ruiz established himself as an elite catcher, a great handler of pitchers and an underrated hitter.

On the season, Ruiz threw out 29 percent of attempted base stealers and was easily the best catcher in terms of catcher's ERA on the Phillies. He also hit .302 with a crazy .400 on-base percentage, had 28 doubles in only 433 plate appearances and walked more than he struck out (55 vs. 54). And, the Phillies were 32 games over .500 with Ruiz in the lineup and only .500 without him. 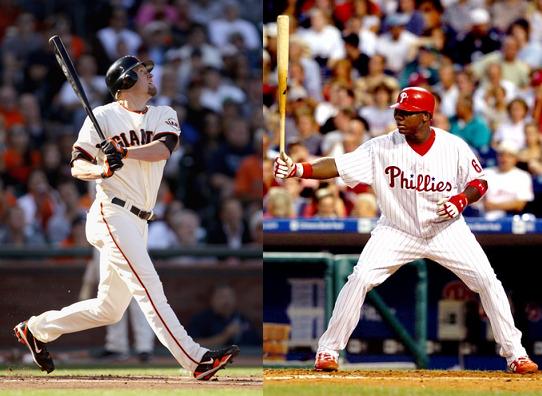 But make no mistake about it: The offenses run through their first basemen, and Aubrey Huff and Ryan Howard will have to show up in the NLCS for their teams to make it to the World Series.

Huff had a quiet NLDS against the Braves, hitting .267 and getting on base just fine, but managing only a single RBI without the benefit of a single extra-base hit. Huff led the team in home runs, RBI, runs scored and OPS in 2010, and the Giants must have more from him than they did in the last round.

If Huff had a quiet NLDS, then Howard went downright radio silent against the Reds. Howard scored no runs, had no RBI, managed only three singles, and struck out five times in 11 at-bats. Howard has a well-deserved reputation for October hitting and has a career .314 average with a 1.055 OPS in the last two NLCS.

He will be put to the test against some devastating left-handed pitching from the Giants. 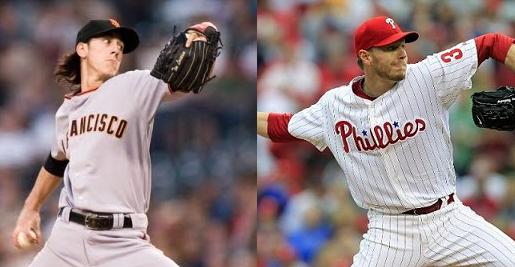 Roy Halladay's post-season debut in the NLDS was nothing short of masterful, as he threw a no-hitter and came within one pitch of a perfect game. Halladay is clearly geared up for postseason play, and it would be hard to top him or his performance so far.

If we were going to pick a pitcher to top him, though, it might have to be Tim Lincecum. Lincecum was pretty brilliant himself in Game 1 of the NLDS against the Braves, pitching a two-hit shutout and striking out 14 while walking one.

This matchup won't necessarily turn on home-field advantage. In Game 1, in Philadelphia, Halladay would seem to have the advantage, having gone 12-5 with a 2.25 ERA at home this season. Lincecum, on the other hand, was a better pitcher on the road, and though he is not an even match for Halladay, he nevertheless managed a 3.17 ERA and a 3.83 K/BB ratio.

Game 1 should be an ESPN Instant Classic.

Matt Cain pitched brilliantly in Game 2 against the Braves, but the Braves were able to come back in the late innings to take the game. For his part, Cain threw 6.2 innings and allowed only a single unearned run while striking out six and walking two. Cain had a great season, with a 13-11 record which undersells his ERA (3.14) and his strikeout-to-walk ratio (2.90)

After a terrific second-half run with the Phillies, Roy Oswalt struggled in his first postseason game with the team, allowing four runs (three earned) on five hits in only five innings. For what it's worth, Oswalt only allowed four runs twice with the Phillies in the regular season and allowed more than a single run only once in his final nine starts.

Jonathan Sanchez pitched almost as masterfully as Lincecum in Game 3 for the Giants, allowing one run on just two hits in 7.1 innings, while striking out 11 and walking one.

Meanwhile, Cole Hamels took Halladay's challenge and simply dominated the Reds in the series—clinching Game 3, pitching a five-hit shutout, walking none, and striking out nine.

Sanchez-Hamels could secretly be the matchup to watch in this series, especially since this would be the matchup in Game 7, if the series were to last that long.

And that, in and of itself, speaks volumes about these pitching staffs, that both teams have No. 3 starters they would be perfectly confident in sending to the mound in Game 7!

Nevertheless, it would be interesting to see if perhaps Bruce Bochy might flip-flop Matt Cain and Jonathan Sanchez in his rotation. Sanchez, who has actually been a better pitcher on the road this season (3.26/2.86), just dominated the Braves in Atlanta and allowed only one run on two hits in eight innings in his only start in Philadelphia this season.

In his first full time major league action, 20-year-old Madison Bumgarner enjoyed a very good season with few bumps and looks to develop into a brilliant, young, left-handed pitcher. He pitched capably against the Braves in the clinching Game 4, giving up two runs in six innings, striking out five and allowing six hits.

Joe Blanton had a deceptively good year after a horrendous start, going 6-0 with a 3.24 ERA and 72 strikeouts in 80.2 innings pitched over his last 13 starts of the season.

You can throw home field advantage out the door in this matchup, because Madison Bumgarner has some of the most bizarre home/field splits in baseball in 2010. His ERA split is an odd 4.60/1.91, while his road K/BB ratio is 4.15 and his home K/BB is only 2.46. Go figure. 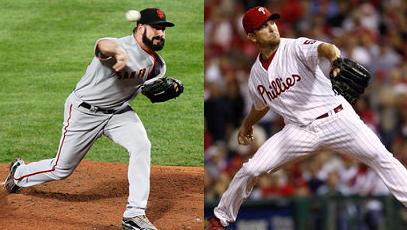 But, check this out.

From August 1st through the end of the season:

I won't tell you who's better, but at this point I think it's a wash.

Conclusions: Anyone Wanna Call This One? 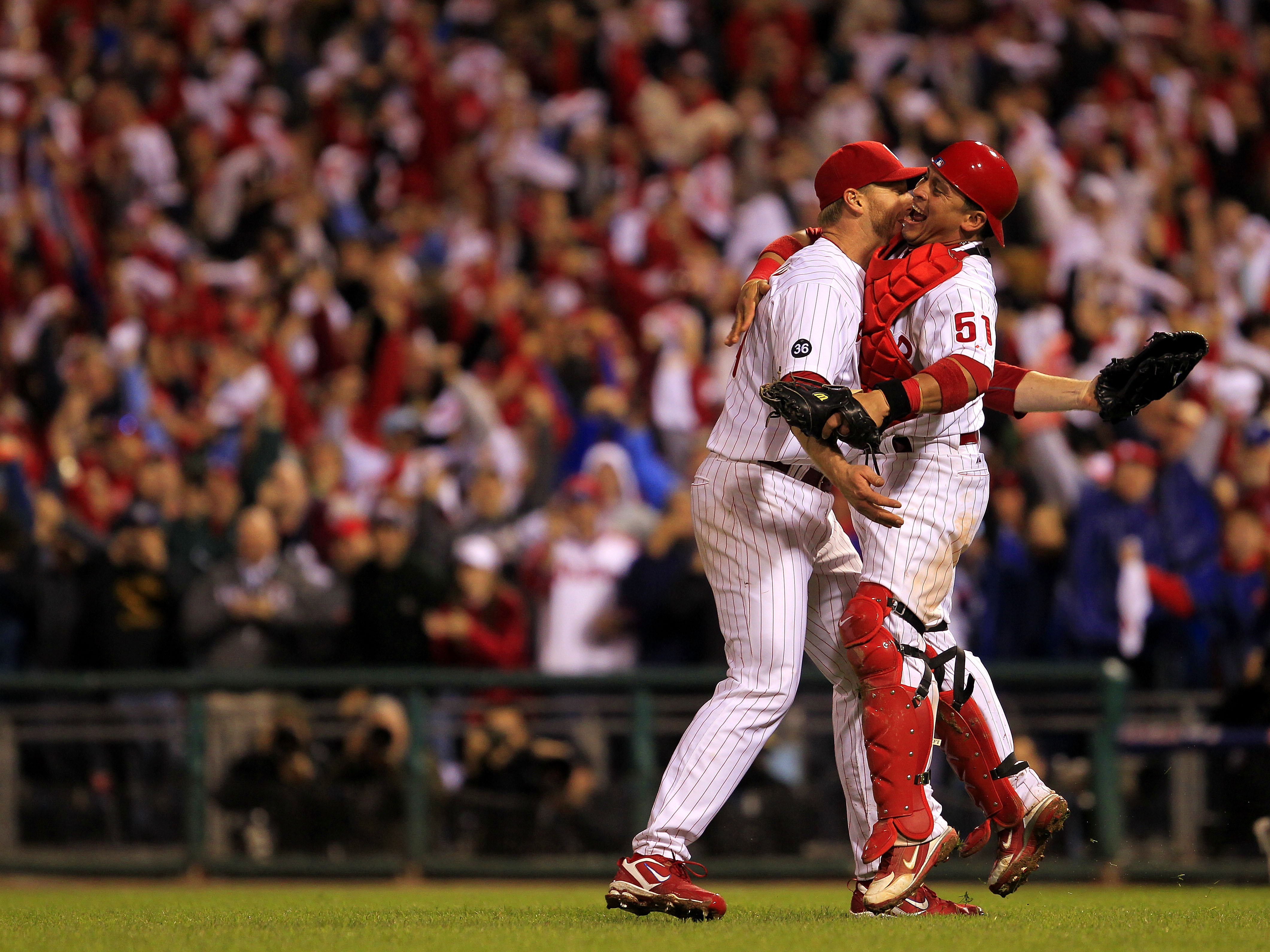 As a Phillies fan, I have fretted over the potential of this matchup since the middle of September. As I watched the final out of the Giants-Braves series, I began to talk out loud to my buddy Bill about the strengths and the weaknesses of the matchup.

Bill isn't the most chatty guy, but he said one thing that shut me up:

What does it take to get four losses out of H2O?

Roy Oswalt went 7-1 in 12 starts with the Phillies.

That's it. Game over. It's that simple.

Prediction: Phillies over Giants in six.