Pittsburgh Steelers: The Good, Bad, and Ugly Of Week 2 With Video 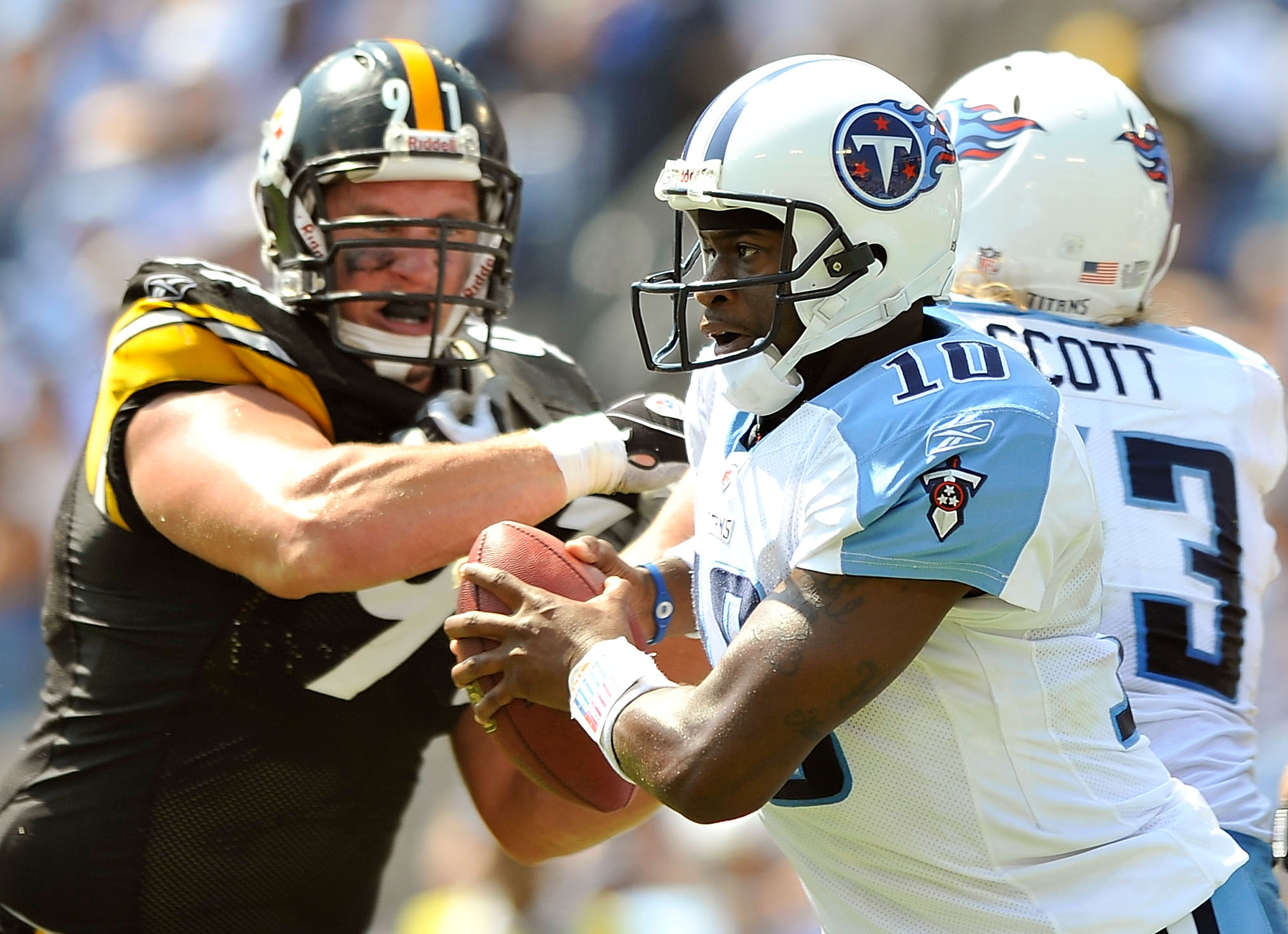 The Pittsburgh Steelers defeated their week two opponent the Tennessee Titans Sunday afternoon by a final score of 19-11.

As week two in the 2010 NFL season comes to a close there have been some definite surprises. The Minnesota Vikings and the Dallas Cowboys are 0-2, and perhaps even more surprising is the fact that the Pittsburgh Steelers and their week three opponent the Tampa Bay Buccaneers are 2-0.

Before we look ahead to the Bucs it’s time for another installment of the good, the bad, and the ugly, week two style.

The Good: The Defense

What can you say about the Pittsburgh Steelers’ defense at this point?

Their performance this week in Nashville did a whole lot of talking. Just ask Vince Young and the Titans’ offense. So Maybe I will just let them tell you just how dominant they were for the next 45 seconds or so with the above video.

The Pittsburgh Steelers defense tallied a total of seven turnovers Sunday afternoon. Of those seven turnovers three of them were interceptions, already accounting for over a quarter of last year’s total.

The Steelers combined the good fortune of an immensely improved pass defense over what they got last week against Atlanta with three forced fumbles on defense, two of which were attached to sacks.

The Steelers complete domination of the line of scrimmage even without Casey Hampton was astounding against a team that came into the game boasting a running back in Chris Johnson,  that had rushed for at least 100 yards in each of their last 12 games.

Johnson finished the game with just 34 yards on 16 carries, and fell short of Barry Sanders’ record streak by two games at the hands of a defense that has allowed just one 100 yard rusher in their last 30-plus games.

The individual performance turned in by Troy Polamalu Sunday was one of the more impressive of his career.

It seemed that no matter what phase of the game the Titans attempted to utilize, NO. 43 was there to disrupt what they were trying to do.

I talked at length about all of the things that Polamalu brings to the Steelers defense in my off-season preview article highlighting the top 10 things he does to help the Steelers D, and he certainly accomplished each and every one of them Sunday in Nashville.

By the end of the day Polamalu registered six tackles, three of which came for a loss, a pass deflection, and one of the Steelers three picks on the day.

Sometimes the saying “you don’t know what you have till it’s gone” rings true, and then there are times when you know exactly what you have because you lost it and it came back better than ever.

The Steelers decided to activate and use one of their more potent special teams weapons in rookie Antonio Brown this week, and it paid of instantly when he ran back the opening kickoff for a touchdown.

Head coach Mike Tomlin said today in his press conference that they had been planning on the reverse all week in practice, and it certainly brought back fond memories of the Bill Cowher era.

The Special teams were excellent on every facet of the game Sunday, not only from a return standpoint, but also from a coverage and kicking standpoint as well.

Seeing placekicker Jeff Reed right the ship in week two had to calm a lot of fears both from a team and fan standpoint.

The Steelers ran back the opening kickoff, and proceeded to force Titans return man Marc Mariani to fumble the ensuing kickoff and recovered it.

Aside from one botched punt coverage in which punter Daniel Sepulveda had to show his former line-backing skills and force Mariani out of bounds as the last man to beat, the Steelers covered their kicks quite passionately and successfully.

The new passion being exhibited on Steelers’ special teams is a far cry from the lackluster effort the squad turned in during the 2009 season, and is reflecting well on the team’s new coordinator—Al Everest. 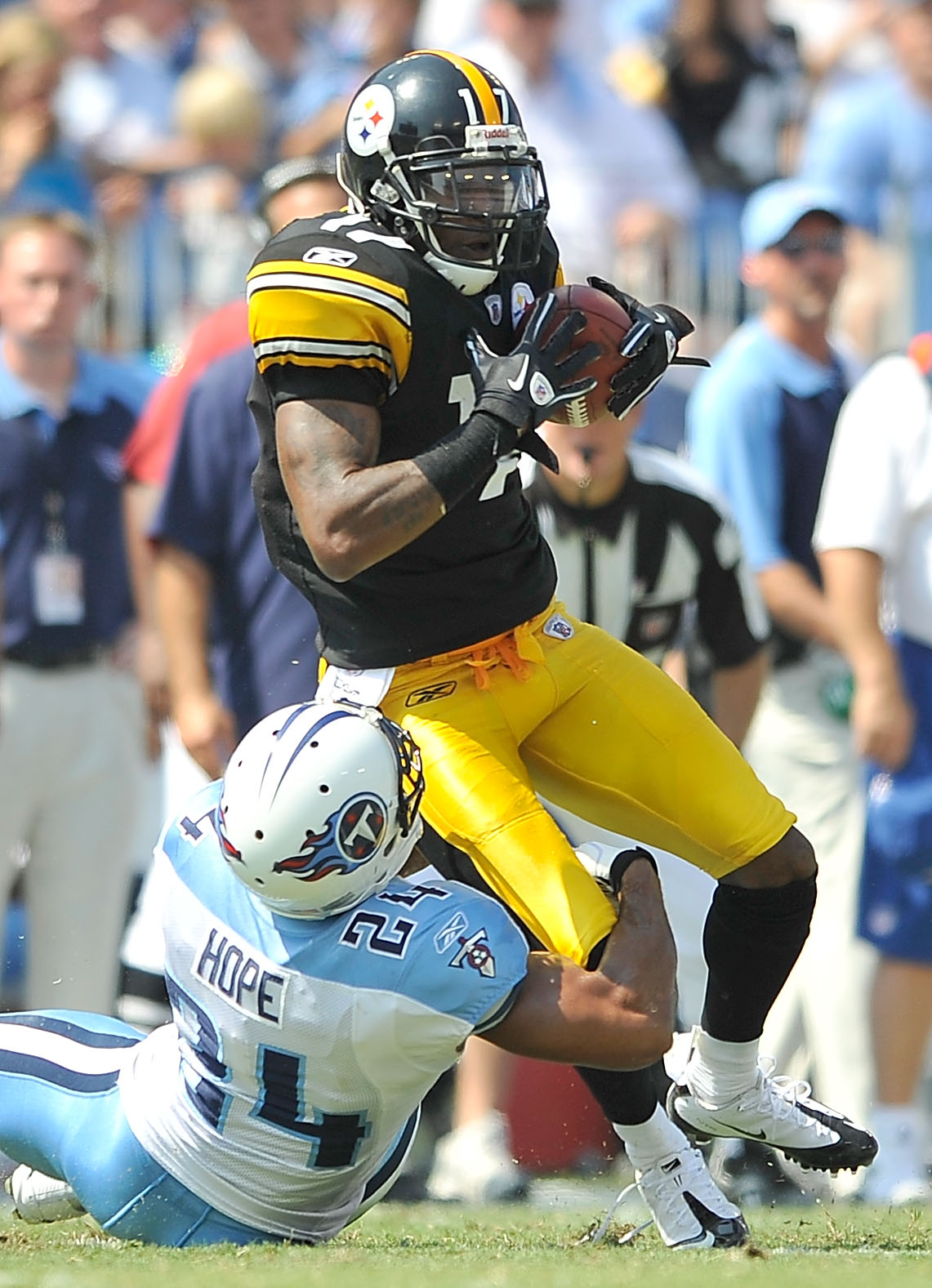 When your team is down to its third and fourth string quarterbacks it goes without saying that the rest of the team, especially the veteran receivers, need to step up and make the tough plays to help their team win.

No such luck for the quarterbacks in black and gold this week.

While Charlie Batch’s 5-of-11 performance only earned the Steelers 25 passing yards during his time under center, the stats don’t tell the whole story.

Out of Batch’s six incompletions— four of them were dropped passes.

Not the stable of rookies and new pass catchers they have on the roster this season, it was the veteran persuasion that caught a case of the “dropsies” rather than a few clutch passes that could have turned field goals into seven points.

Heath Miller dropped two third down passes that were certain first downs if cradled, Hines Ward dropped a catchable fade in the end-zone, and then there was Mike Wallace’s drop on a long pass that looked like a touchdown if he beats one defender.

The team’s top three receivers all dropped passes in key situations, and forced the Steelers to settle for field goals or punts.

If the Steelers are going to be successful against Tampa Bay and Baltimore before Roethlisberger’s return in week six, they are going to have to get better play from their receivers. 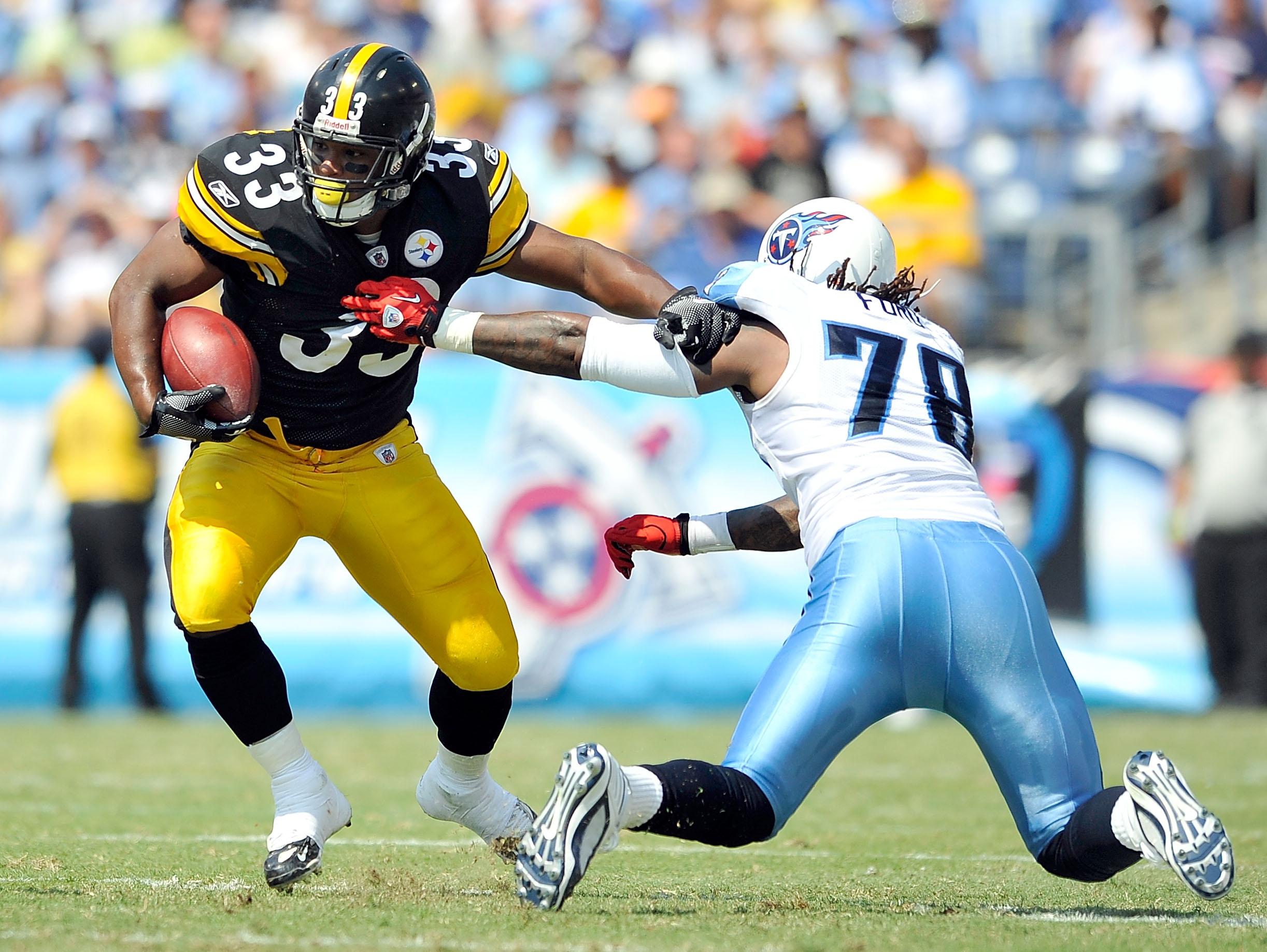 What is the definition of insanity?

It’s the act of doing the same thing repeatedly and expecting a different outcome.

Bruce Arians might not be insane for calling the same type of running play 80 percent of the time, but he sure is driving most of Steeler Nation insane in the process.

Arians might be a great developer of quarterbacks, but he is anything but great when it comes to play calling.

If the Steelers do not figure out a way to keep defenses honest, whether it be a gadget pass play off the run, or simply using the play action pass, opponents are going to start stacking defenders eight helmets deep in the box.

The results being what little success they are having in the run game will cease to exist. 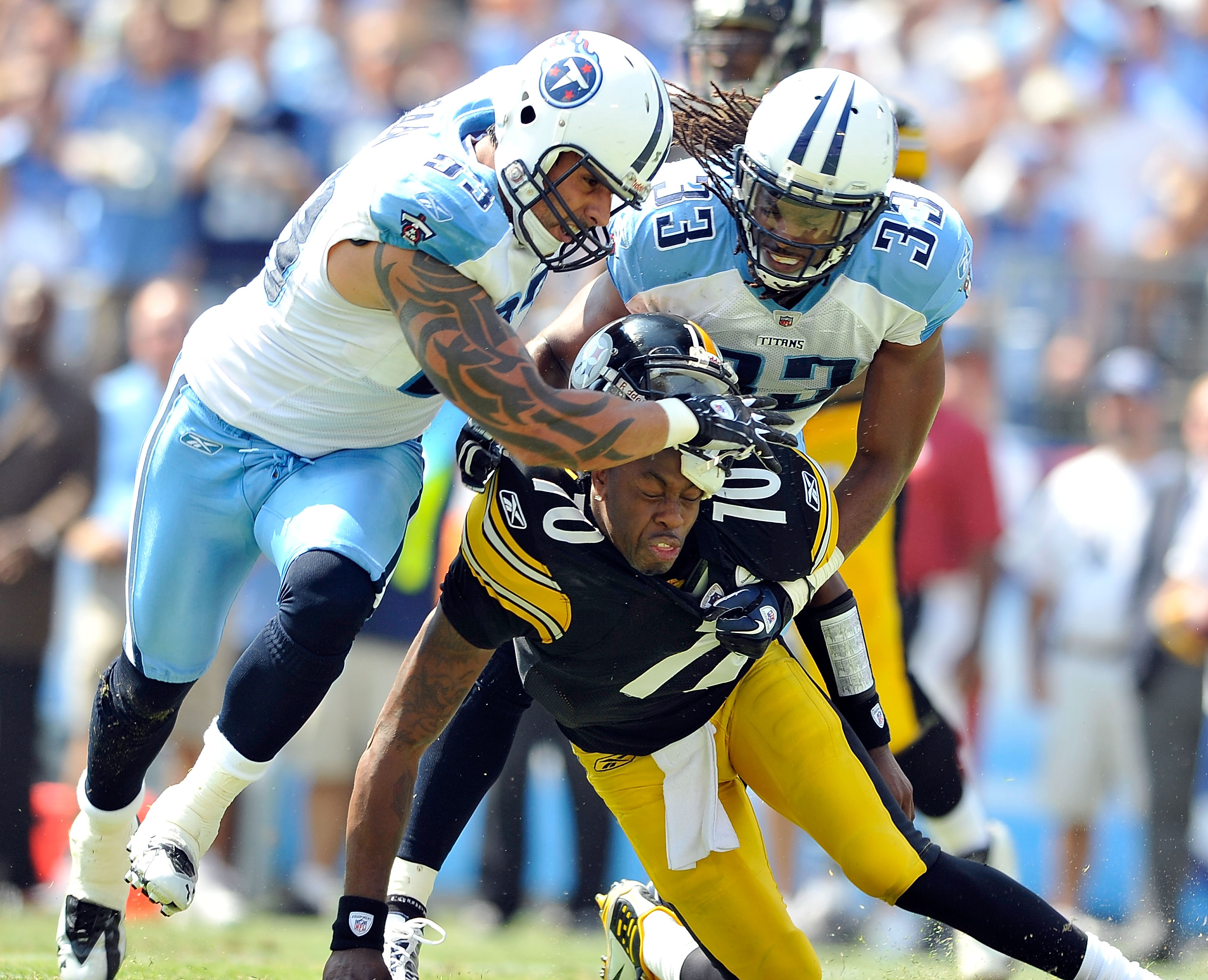 They are what I said they were all off-season long.

The story can be painted however you like, but lets face the music, even if everyone was healthy the Steelers’ offensive line sure as heck isn’t a mean bunch of bulldogs ready to latch on to the first thing that moves.

The decision to release Justin Hartwig and start first round pick Maurkice Pouncey showed the first sign of an overhaul to the unit, but it is going to take time.

The Steelers are likely two years out from having a rebuilt offensive line, and in the meantime they are struggling to keep able bodies on the field.

A lesser ankle sprain involving the ankle of a 6’7” left tackle is a big deal no matter how you look at it. Injuries like these tend to heal slowly especially in big people like Max Starks.

First, he gave up a sack/fumble on the first offensive drive of the game that gives the Titans wind in their sails after being punched in the mouth early by the Steelers’ special teams unit.

The Titans went on one of the few drives where they were able to move the ball, and had it not been for a Troy Polamalu interception in the end-zone the Titans would have at least kicked another field goal.

The Second infraction came later in the second half when a holding call brought back a Charlie Batch to Mike Wallace touchdown pass.

Scott is obviously not the answer, but the Steelers have no better option at this point. With the injury to Trai Essex being day-to-day, there are not a lot of options period.

The Steelers are going to need a much better effort from this particular unit if they are going to outduel a very talented defense line in Tampa Bay. 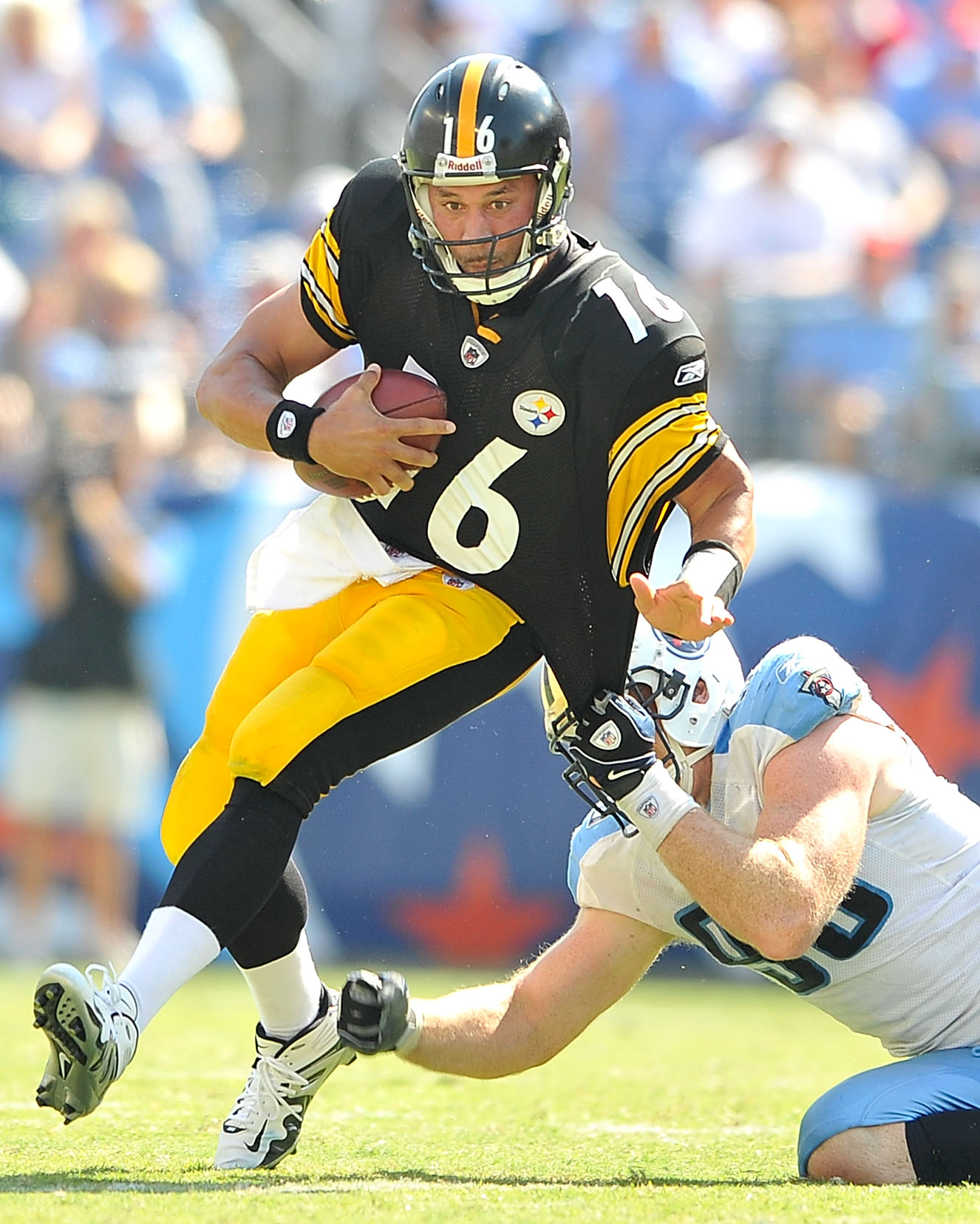 The overall effort of the Steelers’ offensive unit was as ugly as the sight of an 80-year-old Italian man on the beach in a Speedo smoking a stogie.

Yeah that sour look on your face from a mental image unwanted was on mine for much of Sunday afternoon as I covered the game here on Bleacher Report.

From the lack of arms, and things being out of place, to the overall lack of protection and coverage by the offensive line, the sight was more than one person should have to take in at a time. 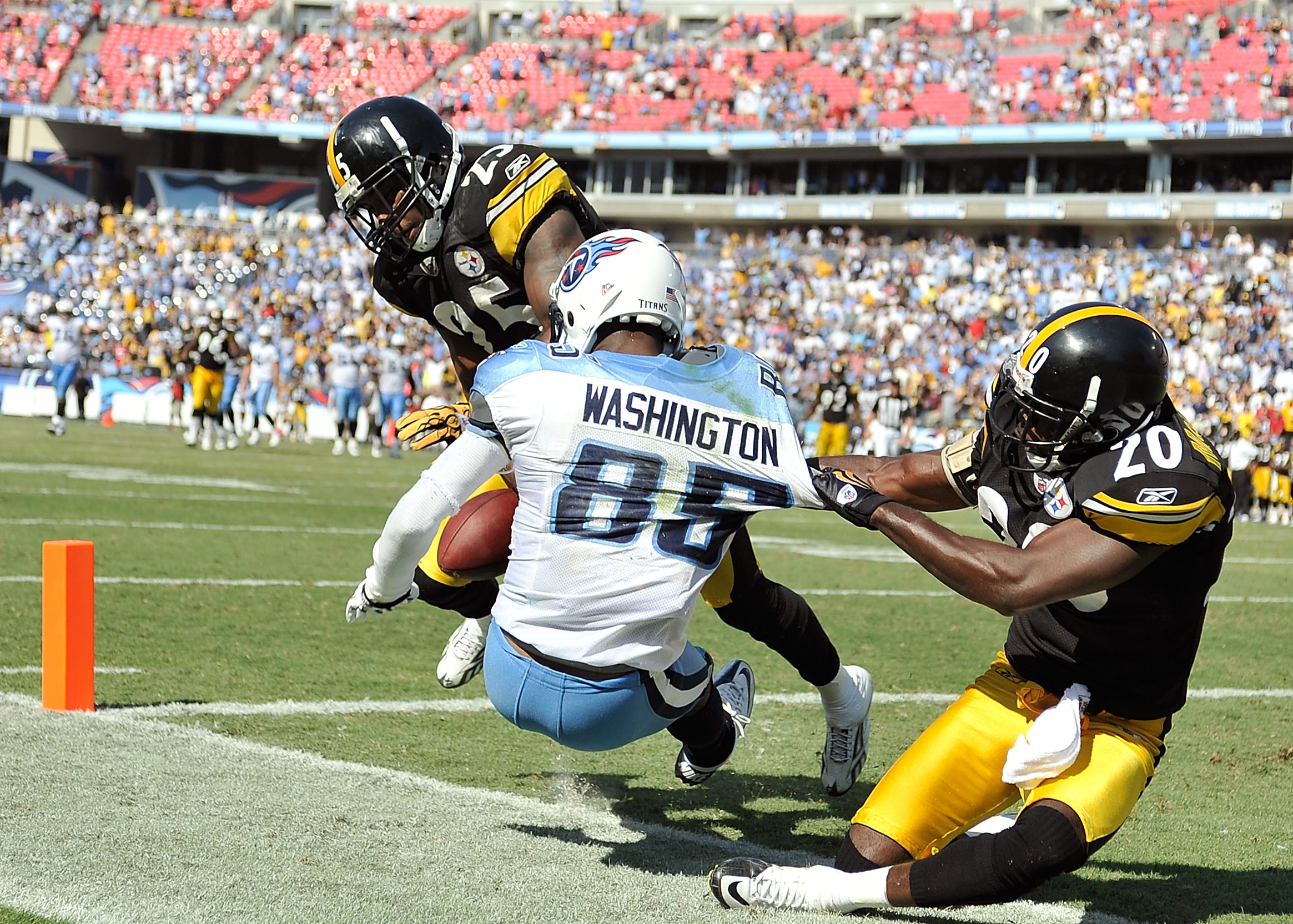 It has never been effective and it never will be.

The prevent defense has been slowly dwindling down late game leads for the Steelers for years, and no one, including Hall of Famer Dick LeBeau, seems to notice.

The Steelers’ defense made dominant look like an understatement on Sunday afternoon. The Titans could not move the ball all day long passing or running against the swarming, attacking defensive schemes they were facing.

Then the fourth quarter comes, the Steelers go into the prevent, and as predictably as a flock of birds changes course to fly right over a freshly washed car, all hell breaks loose.

The invention of the keep it front of you, give up the short to intermediate play in order to prevent the long score defense is without a doubt the dumbest invention in modern history.

Seriously, remember the toilet car, the sandwich in a can, or my personal favorite the bearded beanie hat? Yeah…these guys have got nothing on the inventor of the prevent defense.

The Steelers effectively put themselves in position to win the game by dictating what the Titan’s offense did, and just as strikingly handed that power over to their opponent and allowed them to make it interesting in a game that should have never been in question.

If the Steelers are smart, and there is no brighter defensive mind in the NFL than Dick LeBeau, they will forgo the prevent and stick to the girl they brought to the dance. 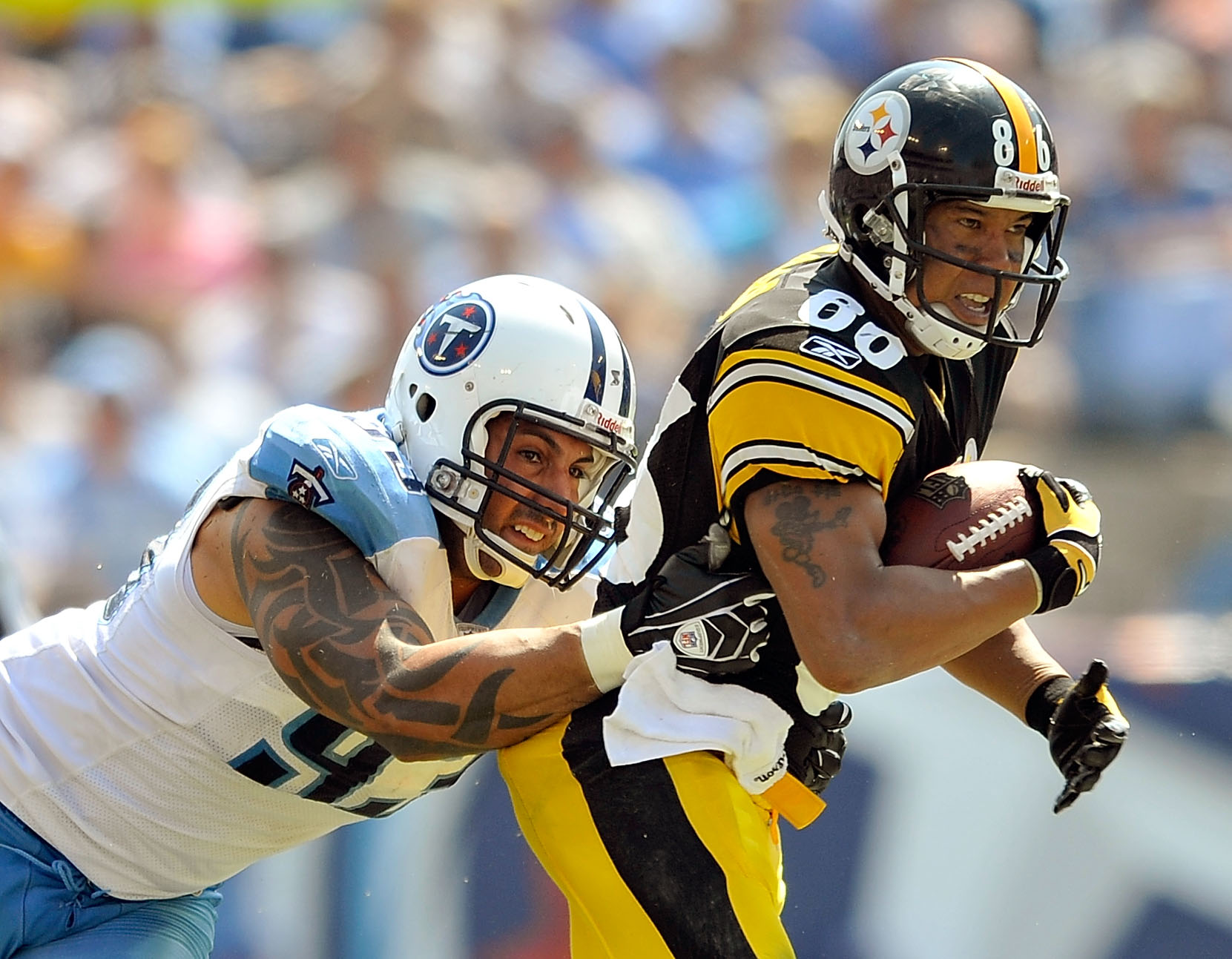 Despite their offensive performance the Steelers were able to advance to a 2-0 start. The score really doesn’t reflect the dominance of the Steelers’ defense in week two.

If the Steelers do not find a way to at least make a respectable showing in the passing game this week, the Baltimore Ravens will be lurking in the shadows waiting to stack eight men in the box for what promises to be an epic defensive battle in week four.