Scott Brosius Interview: New York Yankees' Blast from the Past 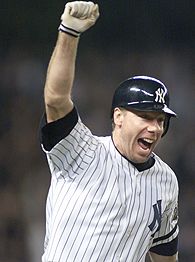 Scott Brosius, '98 World Series MVP, has been out of baseball since 2001.  The three-time World Series winner now coaches baseball at his alma mater in Oregon, Linfield College, where he has put together an impressive resume.

Over his first three seasons at the helm, Brosius compiled an outstanding 100-38 (.724) record.  The Wildcats have won two Northwest Conference Championships and two regional titles.  Linfield finished fifth in the NCAA championship tournament in 2008 and third last season.

Brosius may have stepped away from the game nine years ago, but his big moments still remain high in Yankee lore.  On Friday (9/3/10), Scott came onto my sports radio show at Catholic University (Sports Talk with Justin and Pat) for an interview.

Here are the top 10 quotes from that interview with the audio file at the end.  Enjoy!

10) Welcome to the Big Leagues! 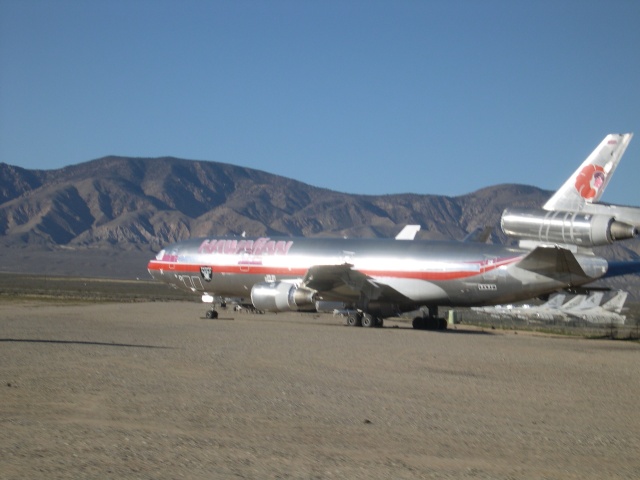 A lot nicer than traveling around in buses

"We're getting ready, after the game, to go over to the airport.  And I'm like, 'Man, I don't have anything to read or anything to do on this flight.'  But I'm like, 'Well, I can just stop in the airport there and I'll just grab a Sports Illustrated or whatever.'

Well, then we drive over to the airport and we turn off and we drive straight onto the runway and to the plane.  And I just went, 'Woah, this is not the minor leagues anymore.'  I mean the bus driving us straight to the plane, we hop right off the bus, right on the plane, and off we went.  And I thought, 'Man, this is pretty cool!'"

—Justin asked him about his "Welcome to the Big Leagues" moment and this story came up instantly. 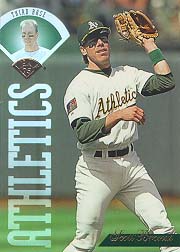 —Describing the feeling after spring training broke and the season was starting.  He would have been headed to his senior year in college, but instead was an Oakland A! 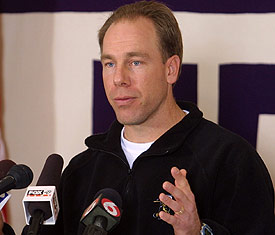 "As you get around the guys a little bit more, you realize wow, they're just like you and I.  But there was times.

"For example, the first time when Reggie Jackson was coaching in Oakland.  And the first time that I'm walking onto the field and I'm in my uniform.  And I walked right by him and tried to introduce myself and he just kept right on goin.

—Discussing the star power on those Oakland A's teams.

7) Thankful To Be Mo's Teammate 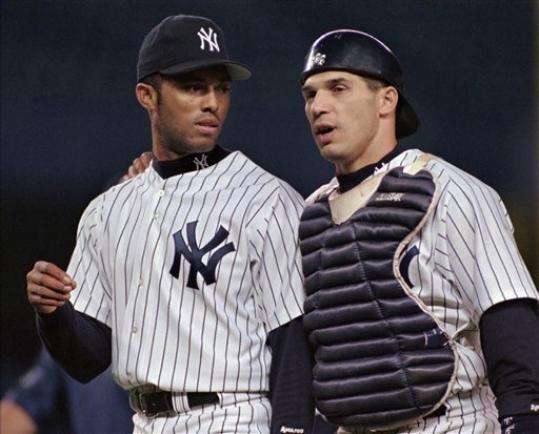 Once Mariano Discovered That Cutter, It Was Game Over!

"He was just starting to own that cutter.

"And I remember specifically one game facing him.  And I don't know, I think it was the ninth inning.  Anyway, he ended up striking me out.  And the pitches that he threw me...I kinda walked back and Art Howe, our manager at the time, kinda smiled and goes, 'How'd you not hit that guy?'

"Because it was just 'Wow,' and so that's when he really started coming into his own there.  He was not a lot of fun to face."

—Discussing an at-bat against Rivera in '97. 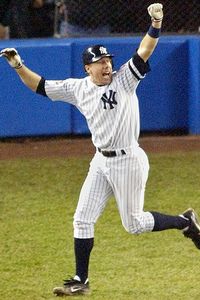 "I do kinda remember running around the bases going, 'Wow, that's kinda cool.  I just hit a World Series home run!  But you do, you kinda dream about it as a kid.  And so just going, yea, that's kinda cool!' "

—Discussing his first World Series home run with the Yankees.  He hit it off of Sterling Hitchcock and would later give the Yankees the lead in Game 3 with a three-run home run off of Trevor Hoffman.

5) Sure, I Can Play the Outfield 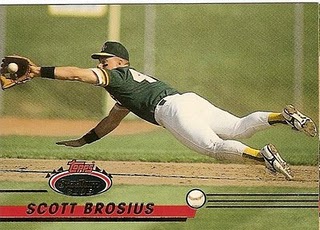 Brosius later won the Gold Glove for his work at 3b

"About 15 minutes before the game, LaRussa called me into his office and said, 'Hey, I know you're an infielder...Have you ever played the outfield?  Canseco can't go.  Can you play the outfield?'

"And you know, here I am, waiting to get my first shot ever.  I'm certainly not gonna say no.

—He must have been good enough in the outfield because he played there 12 more times in '91 (according to baseballreference.com)

4) Steinbrenner Was Always Willing To Spend 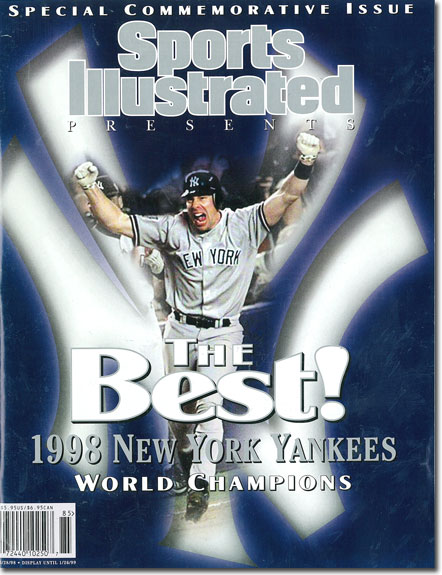 MVP of the '98 World Series

"Love him or hate him, he took a team in the 70s that was kinda struggling, and made it the dynasty.  And there's a lot of other teams out there that spend a lot of money that don't win.  So, just by spending money doesn't guarantee a championship.

"You gotta make the right decisions and ya know, be able to put it together on the field.  Like I said, that's one of the things that we always appreciated.  You were gonna have the pieces there and it was just about putting it together."

—Discussing the argument that fans always use when it comes to the Yankees: They buy their championships.

3) Reflecting on the Boss 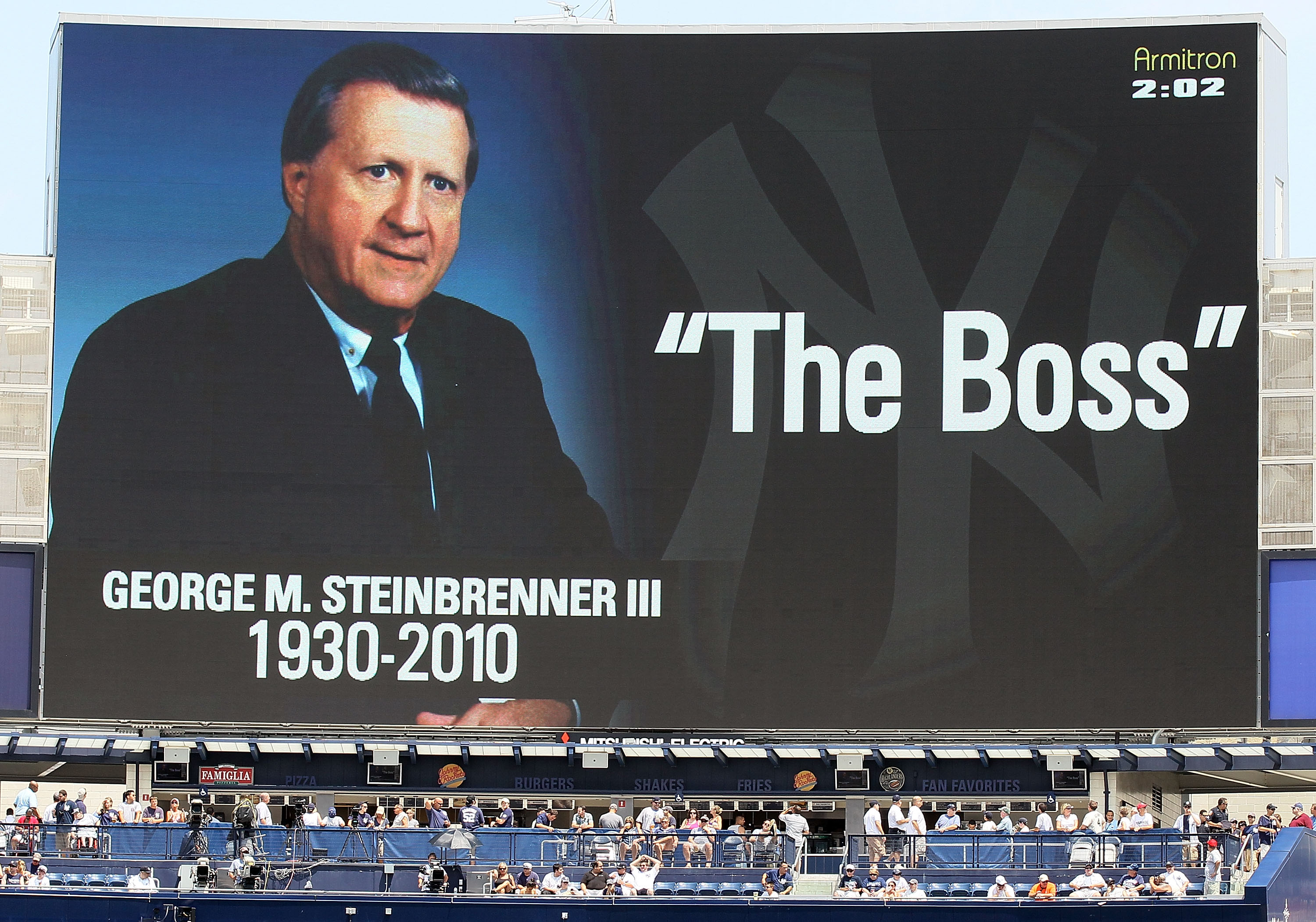 "I remember specifically an early road trip.  We were leaving New York and getting ready to go on the plane and Mr. Steinbrenner was on this flight.  And I had cut myself shaving and didn't realize it, when I put on my white shirt, I got some blood on my collar.  And didn't even notice it.

"Mr. Steinbrenner walks in and goes, 'Uh-oh.  Take a look at that,' and I go, 'Oh yea, shoot, cut myself.'  He goes, 'Hold on just a second.'  And he walks just down the hall, makes a couple of phone calls, and like two minutes later, there's three white shirts for me to choose from to wear on the road trip.

"So, just little things like that, that I just thought, ya know, like I said, all my interactions with him were very positive.  And as a player, you loved him because you knew that he was gonna give you the opportunity or give you the pieces in place to have the opportunity to win."

2) Putting on the Pinstripes 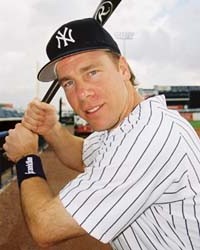 "The year before, in Oakland, we were actually the Yankees home opener.  And so we had all the opening-day ceremonies.

"And I'm on the Oakland side of things and I'm watchin all the pageantry and the festivities and ya know, all the guys, the other players come in, all this, and I'm goin, 'Man, how cool would that be to put on the pinstripes for an opening day, ya know?' And I'm thinking this as an Oakland A.

"And then the next year, there I was, part of opening day.  So, it was a pretty neat deal."

—Discussing the trade to the Yankees and how happy he was about it.

1) Magic Two Nights in a Row 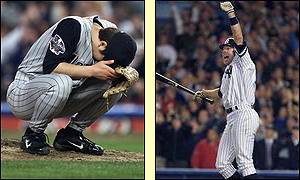 Brosius' Biggest Homer As A Yankee

"To lose those two games in Arizona and to come back to New York and each of those games, we come from behind.  I mean just every night felt more and more special.  It was just like this is just gonna happen.

"So ya know, Game 5, I think that's kinda what went through my head, honestly was.  Tino, the night before, hits the huge home run off him.  And we tie it up and win that game.  So, for it to happen two nights in a row.

"Literally, when I hit the home run and I'm running around the bases, that's literally kinda what is going through my head too!  I'm like, 'No way did this just happen again!'  No way does that happen two nights in a row.  So it was just, I don't know, a phenomenal thing."

—Discussing his famous home run off of Byung-Hyun Kim.  The Yankees were down to their final out and down by two runs in the ninth, just like they had been the night before, and Brosius hit a game-tying home run!  Tino Martinez had done the same thing the night before. 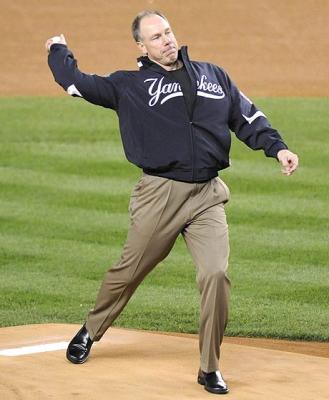 Thank you for the opportunity, Scott!

I hope you enjoyed the different quotes.  If you agree, disagree, or anything else, feel free to comment below.

Below is the link to the full interview: