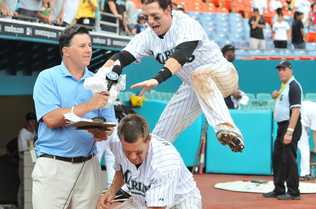 Professional athletes are widely considered as some of the most in shape human beings. Daily they undergo strength training, stretching, running, and other exercises before performing. All of this is to maximize performance and minimize injuries.

Despite this, we still find players put on the DL or IR after a concussion, broken wrist, fractured bone, or shaving cream pie injury.

Despite maintaining peak physical condition, athletes somehow seem to always find strange ways to get injured that no Average Joe ever though was possible, leaving us scratching our heads.

So, what are you waiting for? Begin the slideshow and start laughing at these players' unfortunes. 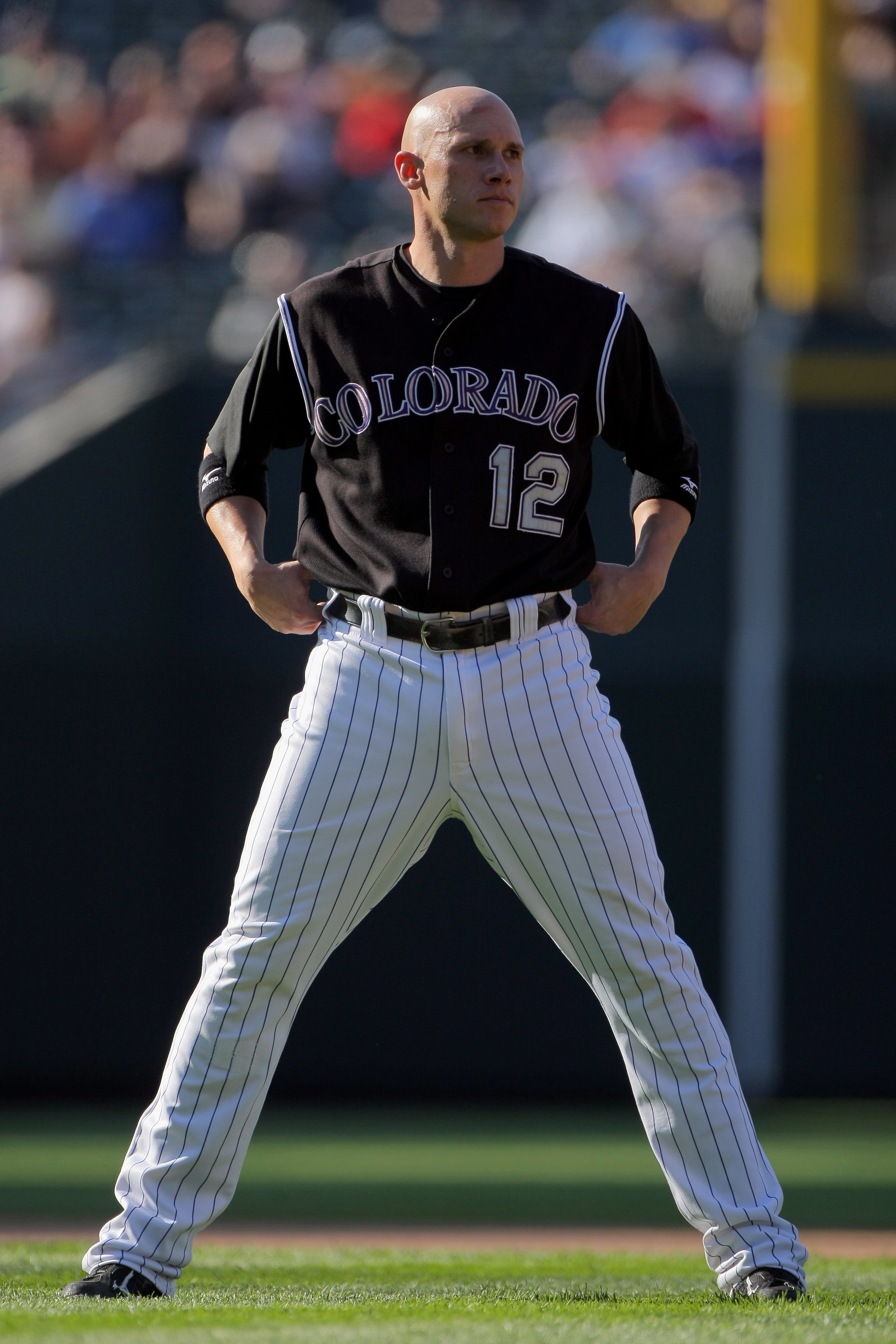 These guys, though not making the top ten, still embarassed themselves by finding themselves unable to play for some strange reason.

Larry Anderson: Strained rib muscle after jumping off of bench during brawl.

Mark Smith: Broken hand sticking it into air conditioner to see why it didn't work.

Oddibe McDowell: Sliced hand while buttering a roll. Hope it was worth it.

Barberie enjoyed a below-mediocre career over six seasons with four teams. But he landed his spot in the history books with one wipe of the eyes.

Once with the Florida Marlins, he had just finished cooking food with chili peppers and inadvertently wiped his eye with his hand, which still had juice from the chilis on it.

Barberie ripped his contact and had to miss the game, which occured during one of his minor hot streaks of the season.

Coleman has one of the worst-timed injuries in history. During a delay in the 1985 World Series, the tarp ran over the speedy outfielder. His Cardinals evidently lost the Series as he missed all seven games. 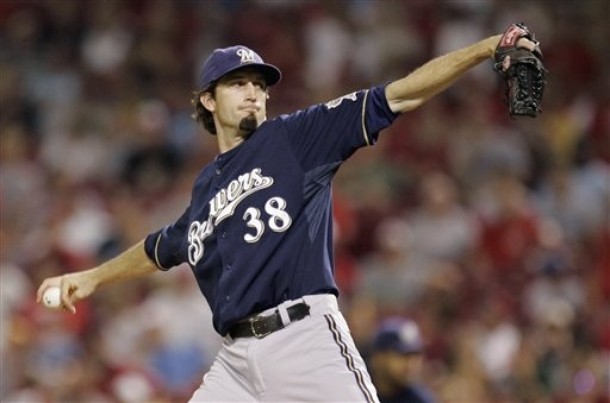 While with the Milwaukee Brewers, Matt Wise enjoyed a successful career as a middle reliever. But perhaps the largest mark he left on the Brewers organization was to be careful with salad tongs.

In 2006, Wise cut his middle finger on his pitching hand on a pair of salad tongs. Only on a sub-par team such as the '06 Brewers would this be taken as a huge laugher.

He could not throw a changeup, his primary pitch, without the middle finger.

The salad tongs may be the most harmless cause of injury on this dubious list. 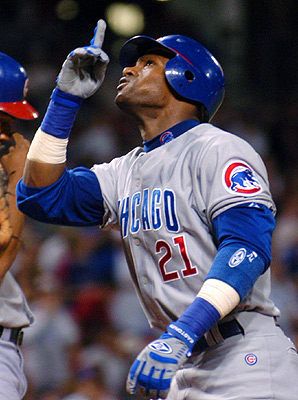 Sammy Sosa may have captured the attention of the nation during his epic home run race with Mark McGwire in 1998, but he captured our laughs with an injury.

Sammy missed time after a double-barrell sneeze gave him back spasms. He spent time receiving back treatment while the rest of his teammates slugged away and sneezed harmlessly.

While not the only player to hurt himself sneezing, it was the most famous case and we all enjoy laughing at Sammy's misery. 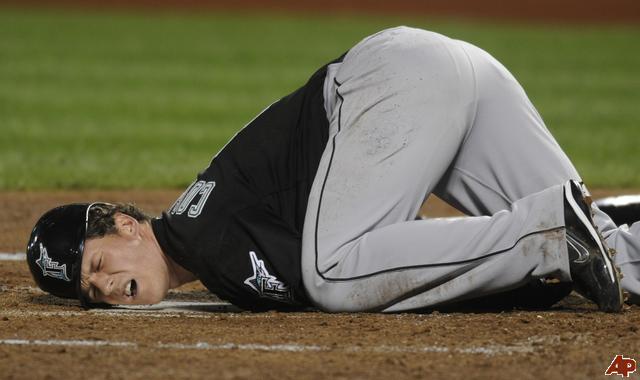 Occuring just last month, this is the most recent addition to the list.

The 2009 NL Rookie of the Year's injury just adds to the list of why not to celebrate walk-off winners with a shaving cream pie. It's getting old and no longer is exciting, not to mention brings injury.

After teammate Wes Helms laced a walk-off hit, Coghlan thought it would be funny to stuff a pie in his teammate's face. Goal accomplished, but at a price.

He suffered a torn meniscus in his left knee hopping around after Helms. He recently underwent surgery that will end Coghlan's season. 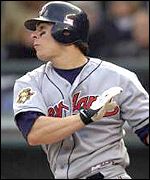 While I was first introduced to Cordova via Backyard Baseball 2000, some of you may have heard his name another way, or maybe saw him at the local tanning salon.

While some players naturally get bronzed by standing in the sun for nine innings, Cordova chose to get it another way.

On a visit to a California tanning salon, the career .274 hitter fell asleep under tanning lamps, forcing him to miss a game. Doctors ordered him to avoid direct sunlight.

While the tanning injury is funny, it begs any male to ask why he was at a tanning salon.

All I have to say is that I picked Pablo Sanchez or Achmed Khan over Cordova in any given pick up game of Backyard Baseball. 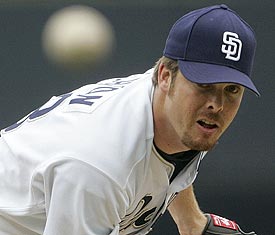 The former Padres co-ace just wanted to kick back with a movie at his house, but ended up in his own thriller in the hospital.

In a 2001 attempt to take off that annoying security tape off of a DVD, Eaton lost control of the knife and stabbed himself in the stomach. He was rushed to the hospital, where he turned out to be fine.

You just have to hope that the movie was worth it. 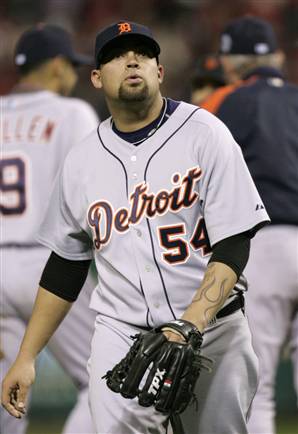 When the Tigers lost their flame-throwing reliever for three games in the 2006 ALCS, they were clearly upset. When they found out why, someone must have been outraged.

Zumaya was shelved as a result of inflammation in his right forearm. Why?

He played too much Guitar Hero.

The team noticed the injury was more common in guitarists than pitchers and told him to stop playing. It worked and he pitched well in the World Series.

But he still continues to play Beatles Rock Band. 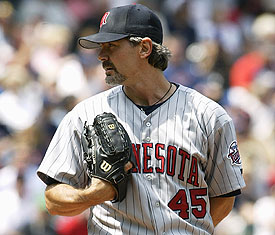 Mulholland, who played for 11 teams and threw a no-hitter with the Phillies, was the victim of one of the most accidental freak injuries in sports history.

While rolling over in bed in a team hotel room, he reportedly scratched his right eye on a loose feather.

No other injury on this dubious list was as weird and unexpected as Mulholland's. 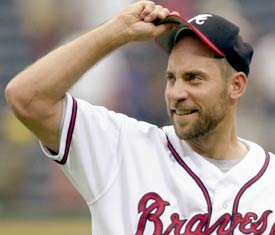 While John Smoltz is one of the greatest pitchers of the era, he pulled off one of the biggest bonehead moves of all time.

The anti-cleaning man and future Hall of Famer once ironed his shirt.....while wearing it.

He evidently burned his chest, though he denied the reports. But the burn on his chest seemed that to come from an iron.

In the words of Keyshawn Johnson: "C'mon, man!" 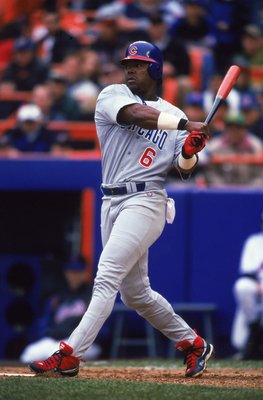 If not for the craziest injury of all time, Glenallen Hill would be known solely for his roof top home run at Wrigley Field, the only player ever to do so.

Hill once tumbled out of bed and crashed into a glass table while having a nightmare about being covered in spiders. He suffered cuts in his body and had the alibi to back it up; there was glass and blood near his bed at home.

Normally, nightmares induce fear and emotional stress, but Hill took those symptoms to the tangible level.

Now why he admitted to this, I don't know. But it gives all of us a huge laugh and one great memory. Hill probably still cringes when he sees spiders while in the coach's box at Coors Field.