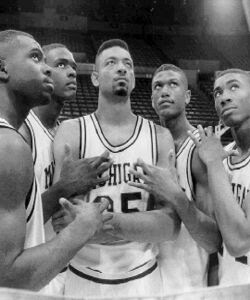 I don't really get too much into the NBA until this time of year, when the games get more intense.

As I was watching SportsCenter and TNT's coverage of the playoff, I started to think about how well the Fab Five has done after basketball when it comes to getting jobs in the media.

We all know they were the center of media coverage during their Michigan recruitment, Final 4's, Time Outs and even the Ed Martin scandal. But most of the five have gone on to solid basketball careers off the floor.

Let's take a quick re-cap of what all the Fab Five members are doing these days.

First off, Juwan Howard is still in the NBA, and playing for the Portland Trail Blazers.He is averaging 6.0 points and just over four boards a game.

Howard is now 37-years-old and has had a 15 year NBA career, which is very impressive.

Chris Webber also had a 15 year NBA career and has also seen some success off the court as well.

He is a regular on TNT's studio coverage and also an analyst on NBA TV's Gametime live.

As you may also recall, CWeb has a Charity called the TimeOut Foundation and has an impressive collection of African artifacts that he started collecting in 1994 when he joined the NBA.

Jalen Rose had a 12 year career in the NBA and has become a regular NBA analyst on ESPN's Sportscenter.

I also learned during research for this post he also did a couple of stints as a sideline reporter for TNT as well .  Rose is also the owner of Three Tier Entertainment, an independent, LA based management and production company. Created in 2007, Three Tier Entertainment is heavily involved in the development of television and film projects and also manages talent including directors, actors and screenplay writers.

Many expect Jalen to get into coaching a some point and maybe even as an assistant coach for the Wolverines.

Talk about a guy that could recruit and mostly in Metro- Detroit!

Jimmy King was not as lucky as his Fab Five teammates during his NBA career.

King only played two NBA seasons with two teams the Toronto Raptors and the Denver Nuggets. He bounced around other professional leagues for a few years as well.

King was the CBA MVP in 1998 and won a bronze medal representing the US in the 1998 FIBA World Championships.

Even though King didn't have a high profile NBA career, he has also found away to make a few dollars in the media.


Ray Jackson is the final member of the Fab Five but he never made it to the NBA.

He was cut in 1995 by the New York Knicks, and a year later, cut by the Detroit Pistons.

Jackson did play some professional basketball getting drafted in the third round of the CBA draft by the Grand Rapids Hoops.

A highlight of Jackson's professional career was that he was named the CBA Rookie of the Year during the 1995-1996 season.

During an interview with Yahoo Sports in 2007 Ray said , "It took me a long time to get over the fact that I was the only one that didn't make it to the NBA from the Fab Five, but I'm over it because I'm back home and I'm happy with what I'm doing with my life."