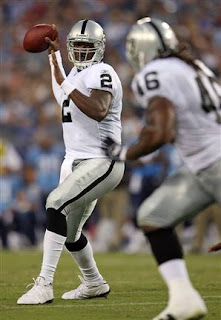 It looks like JaMarcus Russell is trying to salvage his NFL career. The Raiders QB has apparently come into camp in shape and focused according to a report by ESPN. Russell apparently feels the pressure now that the Raiders have acquired Jason Campbell for a 4th round pick from the Redskins.
My take: Campbell is the better NFL quarterback and will win the job by August.

This is one of the more interesting quarterback battles in the NFL. The Broncos have three average quarterbacks on their roster. Orton is the most efficient of the three and is a journeyman at best. Quinn is shaping up to be a draft bust ala Tommy Maddox. Tebow was a great college player but will never be an elite NFL QB.
My take: Orton wins the job and Quinn is the backup. Orton will be dealt after the season and Tebow will be the starter by 2011.

Seneca Wallace proved that he is a backup quarterback and not a starter. McCoy will likely need to sit for awhile before being subjected to the punishment of the NFL. Delhomme is a turnover waiting to happen.
My take: Delhomme will start the season before being yanked. McCoy will be under center before the 2010 season ends.

Can an aging Matt Hasslebeck hold off a seldom used backup quarterback? I think both quarterbacks will struggle as the Seahawks only have one legitimate receiving option in T.J. Houshmandzadeh.
My take: Hasselbeck hasn't played a complete season in 2 years. This year will be no different as Whitehurst will get significant playing time.