This weekend, Portland played a back to back against Orlando and Miami on the front end of a tough four-game road trip. At times in the last couple weeks it seemed that this trip was a daunting task. I thought we could lose all four games, but thanks to the resiliency of our All-Star and the help of certain players who don't play quite enough, The Blazers were able to put up a fight in Orlando, and then outlast the Heat in Miami.

Due to various other activities I wasn't able to fully absorb this game. I listened to pieces of it on the radio but didn't view the second half until this morning. All I know is I had some fun reactions last night when I was told about the play of certain Blazer players. You know who you are. Something like, "No way LaMarcus only had 3 points and 1 rebound," or "Martell couldn't have been 1 for 11."

Not only that, but Bayless was 0 for 5 in the second half and obviously we sputtered in Orlando. I'll move on from this game, but here's the box score in case you missed some of the finer statistical points.

Now, let's get on to the good stuff, another victory in Miami. According to Mike Barrett, we are something like 17-5 all-time when playing at Miami. That's an amazing record on an opponent's court, but don't be fooled, this would be a tough game which Portland would have to work very hard to win.

Today was one of those games where the super hero takes over and the side kicks all contribute. Brandon Roy had yet nother monster game, in fact he's now scored 23 or more points in 10 straight games. That is just ridiculous. The best part though, had to be the contributions of his teammates. LaMarcus bounced back with 23 and 8, including strong takes down the stretch. Martell had 15 points and 5 rebounds including three 3-pointers and efficient shooting. Both Martell and LaMarcus bounced back from horrendous performances in Orlando to assure a victory in Miami.

Another huge contributor, someone who continues to get zero credit but seems to anchor this team defensively is Joel Przybilla. The guy is so under-appreciated, yet he's constantly working the defensive end of the floor. He had four blocks today but only received credit for two. He also accumulated 10 plus rebounds for the sixh game in a row for Portland. His defense, commitment, and overall attitude and personality are so important to this team. The Blazers can make the playoffs if Joel is complimenting the amazing play of Brandon Roy.

It's hard to fault anyone or anything too much in a road victory. Don't get me wrong, their were problems, but the team played well and showed its mettle in a much needed win.

That doesn't change the fact that Steve Blake is just not right for this team anymore. He's sort of like the guy who doesn't know when to leave or the friend who's worn out his/her welcome. It's not even his fault, it's really Nate McMillan's fault. But the fact is, it's time for this team to graduate into the new NBA. Teams are drafting dynamic, game-changing point guards. Guards who can create and draw fouls are excelling in this league.

Right now, it is so ridiculously obvious to me that Andre Miller should start, and Jerryd Bayless should come off the bench. There are no minutes for Blake in my world. Even at his absolute best, Blake makes three or so three pointers in a game but still contributes almost nowhere else and is terrible on defense. At his worst, sort of like tonight, he is 1-5, commits 2-3 bad fouls, and can't guard even the slowest point guard in the league. How many times can Carlos Arroyo or Mario Chalmers burn Blake before he's given the full hook?

Seriously, the braids just aren't working Michael! But to be fair though, Beasley is a nice player. He schooled our guys for awhile in this game. He's come a long way and seems to be fitting in well with the Heat. That's all I've got tonight. 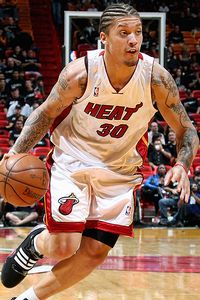