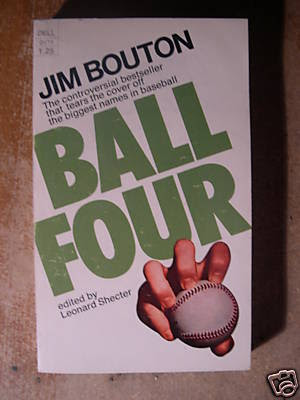 baseball season with the Seattle Pilots.

I read Ball Four the first time in the 1970’s before reading it again almost forty years later last week. It is one of the fastest reads I have read.

It is written in diary form and gives Jim Bouton’s views on his dealings with general managers, managers and other players.

He writes about the shenanigans baseball players indulge in during a baseball season. The book goes into detail about Bouton’s salary disputes with the New York Yankees in a time where there were no baseball agents and players had to negotiate for the best contract they could wheedle out of management.

Back then Bouton would fight tooth and nail to get a $2,000 raise and in his first season he made $7,000 which was the minimum salary at the time but got another $10,000 as his World Series share.

Then the book shifts to the 1969 baseball season as Bouton struggles to make the Seattle Pilots pitching staff showing how far his career had regressed after winning 46 games for the Yankees in his first three seasons.

Bouton would have a 9-12 record in the last three seasons of his career after  the Pilots bought him from the Yankees.

He battled all spring training to notch a spot on the Pilots pitching staff and was placed in the bullpen and the book tells of his battles with the pitching coach Sal Maglie and the manager Joe Schultz over whether he should throw other pitches beside his knuckleball which he was having some success with.

Begged To Start A Game

Bouton also had problems when Maglie and Schultz thought he was throwing too much on the side between relief appearances. He hinted several times that he would like to start but Maglie and Schultz ignored the pleas till later in the season probably more to shut him up than for any other reason.

When he did finally get a start he was creamed and was removed from the game early. Many times when it seemed like Bouton would be the logical pitcher to be called into a game another reliever would be called in.

He also had problems getting the catchers on the Pilots to catch him when he wanted to throw on his own since the knuckleball has a way of hitting catchers and injuring them.

Management Pictured Him As Clubhouse Lawyer

There are many mentions in the book about Bouton being a non-believer when it came to religion. He was regarded as a troublemaker by management and was also tagged with the clubhouse lawyer connotation.

The book mentions a game I was actually at on September 19 of  1969. It was a few weeks after Bouton had been traded to the Astros. It was a rainy night and I walked to the baseball game in the rain from the adjacent Astroworld Hotel where I was staying. It was raining so hard that someone had an umbrella open in the Astrodome because the roof was leaking.

Bouton entered the game and the game was stopped after he struck out a batter. That strikeout set a record for most strikeouts in a season by an Astros pitching staff and Bouton mentions this in the book. He pitched scoreless seventh and eighth innings allowing one hit and striking out four with no walks.

His superb relief effort kept the game close so that Fred Gladding could hold the Reds in the top of the ninth.

The Astros entered the bottom of the ninth inning trailing the Reds 2-1 but with one out rookie Keith Lampard hit a two run walkoff homer that gave the Astros a 3-2 win. Ironically it was the only home run of Lampard’s major league career and he would play his last major league game the next season. For this one night he was a hero though and the Astros were still barely in the NL West pennant race but were 4-9 after that game.

As far as I know no other book has been written in a firsthand account about a major league baseball season in diary form before or after Ball Four. Baseball commissioner Bowie Kuhn said the book was detrimental to baseball because it revealed the inner workings of salary negotiations and other information not revealed to the public before the book.

Bouton has few kind words to say about his former general manager Ralph Houk who was his main adversary when it came to salary negotiations in his early years with the Yankees. Houk was even interested in renting a place he found until he found out that Bouton would be his landlord since Bouton had invested in some real estate properties.

The book was an excellent read despite Bouton’s jaundiced views in some areas and he was not without enemies in the clubhouse as he found out when he found two pairs of  his baseball shoes had been nailed to the clubhouse floor.

He appeared in 73 games in 1969 the year he was writing the book as the season progressed. He was 2-3 with a 3.96 ERA during the 1969 season which included his stats from the Pilots and the Astros. He struck out 32 batters in 32 innings while walking 12. He pitched 122 innings and allowed 109 hits and struck out 100 between the two clubs.

Bouton was released by the Astros on August 12, 1970 and wouldn’t pitch in the majors again till he pitched for the Atlanta Braves in 1978.

He was ineffective in 29 innings for the Braves in 1978 walking 21 and striking out 10 while allowing four homers. His career was for all practical purposes over after his first three seasons with the Yankees when he posted a 46-27 record. He was only 16-36 over the last seven seasons of his career.

One thing for certain is that Ball Four will continue to be read by new generations of baseball fans and take them back to the 1969 baseball season and they will be able to read a firsthand account by Jim Bouton of what it was like to play major league baseball back then in the good old days.